You gain a unique perspective of a city from among the rooftops. Not by looking down at it, but by listening. It's a distillation; all the other senses stripped away, leaving just the sounds. Sat up on the terrace here in Chiang Mai, all I can hear is the irregular but persistent phut-phut of the tuk-tuks, and the city sounds like a waiting room full of infants when the whooping cough's in town.

Chiang Mai may well be the biggest city in Northern Thailand, but it never quite feels like it. The old town centre is as near to a perfect square as town planners get, marked out by an ancient wall and moat. Within it are all the usual South East Asian charms; quirky little alleyways, food carts, holes in the road, stray dogs, low hanging electricity cables, massage parlours, 7 Elevens, McDonalds, Starbucks and colourful tuk-tuk drivers canvassing your fare. And temples, of varying condition and grandeur. 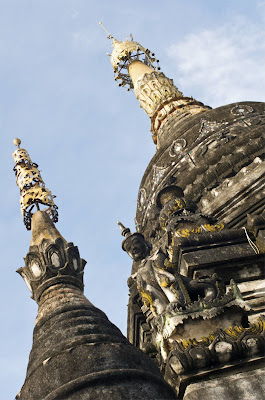 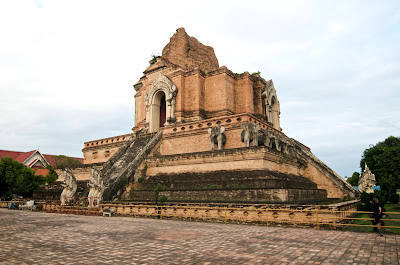 Atop a nearby hill, the temple daddy, Wat Suthep, keeps watch over the city. They like their gold in Thailand, sometimes a little too much, but this place just about pulls it off. That's partly due to the setting; a crisp view of Chiang Mai below, and raw natural beauty all around. Only the high pitch of the crickets, sounding like a million kettles all boiling at once, upsets the harmony. 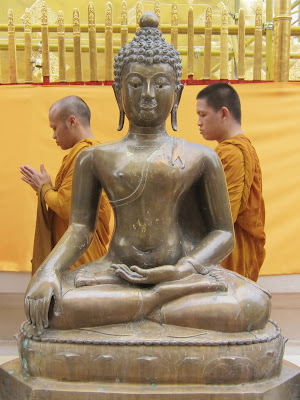 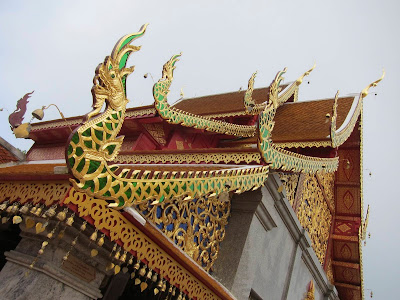 I was fully prepared to fall in love with Chiang Mai. It's not Southern Thailand, with its marauding backpackers, stunning beaches, mushroom shaped Bond islands and sex-pats. It's the North. It is different. Rugged, genuine, honest. And maybe it is, but it doesn't quite manage to charm me, and I can't help feeling a little disappointed

An hour either side of five, the city chugs to a standstill, and the fumes from a few thousand tuk-tuks stifle the air. The markets sell almost exclusively tat, and manage to string the same four stalls out over what seems like a few square miles (why do people have a foot dragging, deathly slow market walk?). There are some good eateries, and the bars don't feel quite as sordid as I'd feared, but just a couple of days here is enough for me, and it's definitely time to leave the tuk-tuks in my dust.
Posted by Joe at 21:48