For the first time since I left London back in February, I find myself in a place I've been to before: Hong Kong. Thanks to my flight's eight hour delay, it wasn't really until the morning when, opening the curtains, I was struck once again by the complete and utter insanity of the place.

I braved the humidity for a good ten minutes and just stood on the balcony watching. Twenty six floors below me, another high rise beginning to sprout from the ground. Between it and the Peak, shrouded in mist, cloud and pollution, hundreds of others are clustered impossibly close together, making Hong Kong Island look like a giant pin cushion. 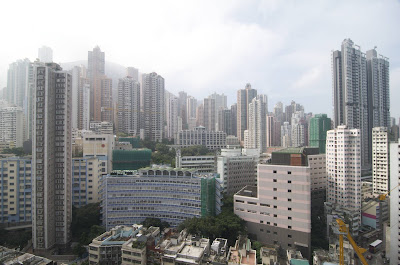 Sheung Wan, HK Island
I walk out into the thick, hot air, along a street selling chinese medicine; turtle shells, the strangest contorted roots and fungi, lizard skins. I ponder my good luck as a few spots of rain fall - maybe the humidity will ease. But they're not raindrops, just specks of water cast off by the air conditioning units poking out of the giant lego towers that surround me.

Hong Kong is sculpted by its history and geography in equal measure. The colonial legacy lingers on, and it still feels quintessentially British in places, defiantly Chinese in others. The once great meets the now great in every corner here, with seemingly few problems. But when two things rub against each another, there is friction. Friction creates energy, heat. In such a small space, you can almost feel it; a buzz on the streets, something, other than moisture, in the air.

It's all around you, in all the contradictions; the guy with no arms begging in front of the Rolex store; the Star Ferry, unchanged in over a century, delivering sharp suited workers to the world's coolest office buildings. Old and new, rich and poor, east and west. 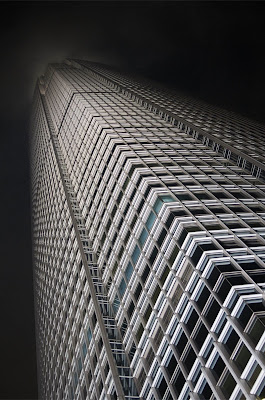 Two IFC, Central Hong Kong
A twenty minute cab ride from the shadows of the skyscrapers and you can find yourself mercifully alone. Embarking on a trek over Dragonback Mountain perhaps, or on the beach at Big Wave Bay. And you need to seek salvation in these places, because in the crazy heart of the city, there's nowhere to hide. 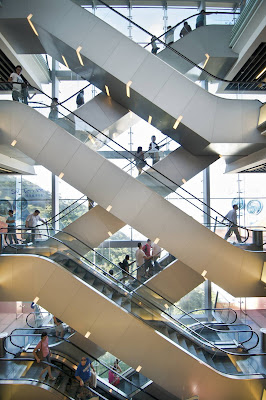 Escalators, The Peak
Walking through a labyrinthine subway station with my friend Nick, we are fighting against an unstoppable tide, the odd gwei lo head floating above the sea of Chinese ones. "Wherever you go in Hong Kong," he remarks, "everyone else is going the other way." Then, after a pause: "Even when you turn round."
Posted by Joe at 19:13