Autumn is beginning to win the struggle with summer in Nikkō, though there's still a little work to be done. In a couple of weeks the whole place is going to burst into the most incredible colours. I'll be gone by then, sadly, but it's enough for me, in the corner of an exquisite Zen garden, to glimpse a preview of what is about to unfurl itself upon the surrounding hills. 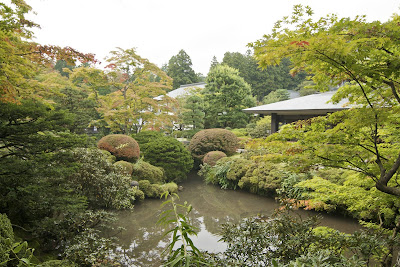 Nikkō is a small town, borne out of temples and shrines whose history dates from the eighth century. They're concentrated in a corner of Nikkō National Park, separated from the rest of the city by a small but fast flowing river. The sacred crossing, the Shin-kyō Bridge runs alongside it's modern replacement. 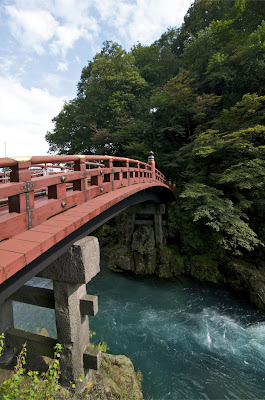 The diminutive river still roaring in my ears, stone steps covered in moss carry me into the park in the shadow of ancient trees, as water runs back down past my feet from the mountains. It already feels like a sacred place, without the help of any temples. The dampness is overwhelming, but not in a cloying or muggy sense; rather it is like being engulfed by clouds, though there are none, and the sun occasionally manages to find its way through the dense natural shelter. 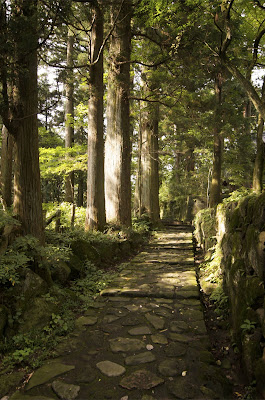 The further I venture into this peculiar place, where man made temples and shrines nestle in the forest's natural spendour, the more I wonder why they bothered building them. The towering, arrow straight trees are more magnificent than any of the stone pillars, and the grand temples themselves were only built by chopping them down. 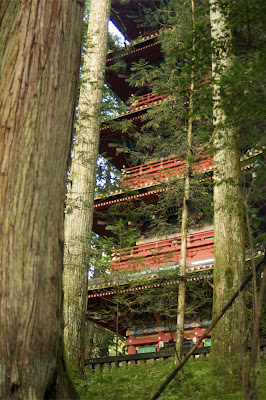 The temple buildings are plush and gilded, with the sumptuous effect of a Roman Catholic Cathedral. But none of their intricate carvings can match the patterns of the fern and moss for sublimity. The forest alone is a wondrous, magical, sacred place, where the sanctity of nature reigns. The great Japanese Cedars that reside here are cousins of the Giant Sequoias that grace Yosemite, and beneath them, you feel the same awe, the same proximity to the heart of the world itself. 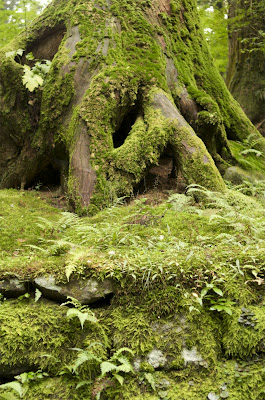 Everywhere I turn, I hear water; narrow channels ferrying it somewhere, as I climb higher into the forest and its core of illustrious temples. It feels like I'm tracing something back to its unknown source, in some fated, Kafka-esque, vocation. All the time though I'm touched by the moisture; by the way it snakes its way down the mountain and the fact that, as it does, it breathes life into everything it passes. It's as though I'm inside some giant living organism, and the water is the blood coursing through its veins, I think, before realising that I am. 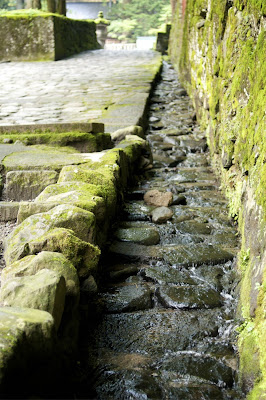 Flying over Japan on my way back from Korea, I noticed how the rural towns and villages follow the water; forever seeking out the arable land like the roots of a tree. Here in the heart of Nikkō, where man has studded nature's canvas with his own little jewels, the essence of things seems so obvious; flowing, beating, living and breathing, right up until the point at which gravity takes over and the water, that feeds the forest, that feeds the temples, drops down into the valley below to continue its inexorable journey. 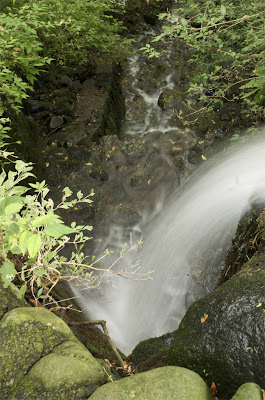