I don't have an awful lot to say about Chiang Rai. The Lonely Planet says it is "more liveable than visitable" which seems to be a polite way of telling you not to go there.

I went anyway, mainly because it was in my way, and also because it is the best place to go trekking from. But the Lonely Planet's advice is evident, because there seem to be a lot of white guys living here. They could be attracted by the clock tower, resplendent in its coat of shiny gilt, surely the most tasteless roundabout in the world, and peculiarly reminiscent of Del Boy's mum's ostentatious grave in Only Fools and Horses when they inadvertently daubed it in luminous paint. 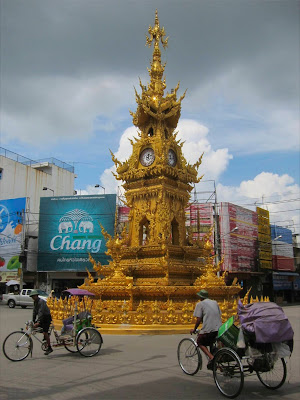 Or maybe they're here for the dubious bars, fronted by nubile Thai girls of questionable age, frequented by fat balding Brits of questionable morals. Last night I sat in a restaurant and listened to an effeminate Northerner arguing with the owner in English before ordering Spaghetti Bolognese with Garlic Bread. Then another ugly fat bloke the wrong side of fifty waddled in to eat chicken and chips in silence, before slinking off to no doubt exercise his economic superiority over the local population.

I like Thailand. I like its people, its countryside. But I despise its moral ambiguity, and moreover, I despise my compatriots, and everyone else, who flaunt their relative wealth to extend their pitiful sexual dominion over those people weaker and poorer than themselves.

I have to leave before I drink myself into a Travis Bickle style stupor, stuff snooker balls in my socks and go marauding around the streets in the dead of night looking for Gary Glitter, or anyone else who happens to bear him anything approximating a passing resemblance, and beat them to within a few inches of their miserable, sordid little lives.
Posted by Joe at 09:20