Tsuguyasu Kida used to be an architect. When he retired, he decided to indulge his passion for food, built himself a restaurant and called it Manaita meaning chopping board. Built, as in, with his own bare hands. It's a small place; eight seats around the counter and another four at a small Japanese table. He cooks, a girl serves. Every morning he goes to Tzukiji market and comes back with whatever takes his fancy. Then he paints the daily menu on two sheets of A4, sellotapes them together, hangs them on the wall, and opens the door. 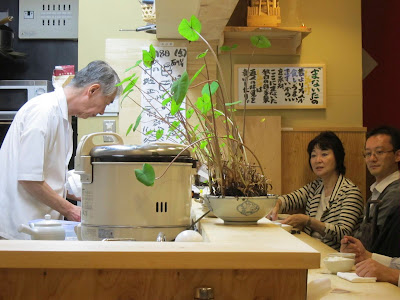 A Japanese potato, liberally seasoned with sea salt and accompanied by a few cold edamame beans are the opening gambit. Simple, understated, delicious. Next, a small bowl of tiny raw white fish, long and thin, like broken strands of vermicelli with microscopic eyes. A dab of wasabi, add your own soy sauce. Fresh, clean and silky. Tofu next. In the bowl next to it, a raw egg yolk and chopped green onion. The soft, creamy texture of the tofu and the crisp acidity of the onion, tempered by the rich smoothness of the egg. Masterful. 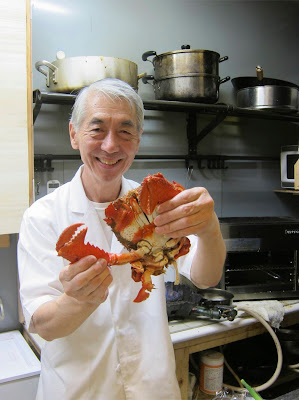 Tsuguyasu with his spanner crab

An enormous oyster, adorned with a solitary blob of hot pepper sauce, follows. The crab is next. Spanner crab, a half each, its cavity filled with delicious white meat you normally find hidden in the darkest corners of the claw. In the course of any other meal, this would be the crowning glory, but the best has been kept to last. A white fish soup (something approximating cod, with firm meaty flakes, in a clear broth with cabbage and seaweed. It is the greatest rendition of the sea that has ever passed my lips. Pure, unadulterated ocean, right there in that bowl; the water that lapped the shores of Eden could not have tasted any finer. 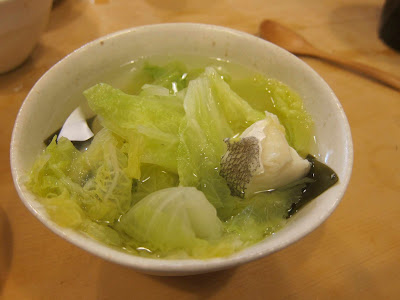