There's not an enormous amount going on in Matsumoto, but once you get past the cordon of shit business hotels around the station, a small, elegant little town fans out before you. Classical music is piped through speakers in the flower beds, and the curtains of a thousand tiny restaurants flutter gently in the alpine breeze that flows down from the great mountains circling the city.

The main tourist attraction is Matsumoto castle, the oldest in Japan, having stood resolutely upon the same spot for the last five hundred years. Which is impressive for a building made entirely of wood, sitting on a flat plain, in a country whose history is studded with habitual conflicts between warring clans. Catching my first glimpse, I like to think it survived because, well, it looks really cool. Who'd want to burn down a thing like that? 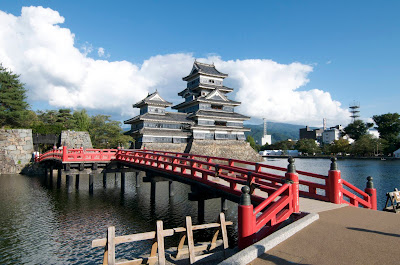 Inside is pretty smart too - low beamed ceilings and impossibly steep staircases linking the six storeys. A "warrior corridor" links two parts of the building, wide enough for hundreds of tooled up samurai to charge back and forth along in the heat of battle. Downward openings line the fourth floor, for the dropping of rocks on the sieging forces below. 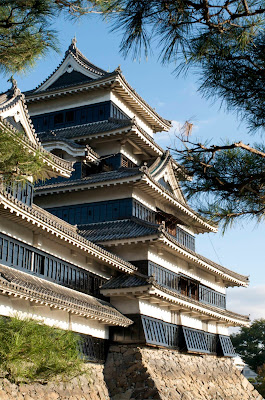 By the fifth floor, the walls are really beginning to encroach. This was the command centre, where generals directed the battle below with the advantage of a 360º view. It's not always easy, in historical places, to connect the place to its own past. But for some reason, as I stoop to look out of the small openings, I experience a nanosecond of transportation, and imagine what it must have been like up there, in the throes of ferocious war. The noise, the smell, the commotion. The blood. The fear. The feeling of besiegement, entrenched in a wooden fortress, just a moat between you and your eager foes, bearing down upon you on all sides as the arrows and shot fly all around. And fire. The thought, surely, that all you were actually defending, was your own funeral pyre.

And it seems odd to think, standing on that spot, that the only thing separating me from then, is time. 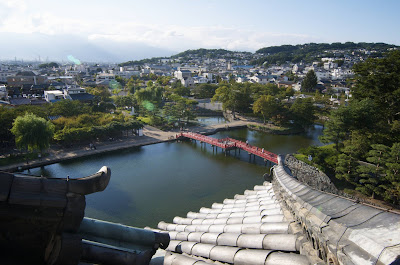