An added advantage of my chosen mode of river transport is that we get to stop at a few villages along the way and gawp at the locals. There are some truly awful village experiences in Thailand, only slightly less distasteful than Victorian freakshows, but thankfully these aren't too bad.

The kids of Houy Palam have the day off school, and are scattered about the village hanging out or helping their mums pound rice. They don't mind you taking their photograph, so long as you leave a few quid in a box to help them build a new school, which seems like a fair exchange. The town is pretty well isolated here, they rear buffalo and cows, grow rice, and there are dogs, chickens and pigs scattered around the place, most of whom will end up being eaten. 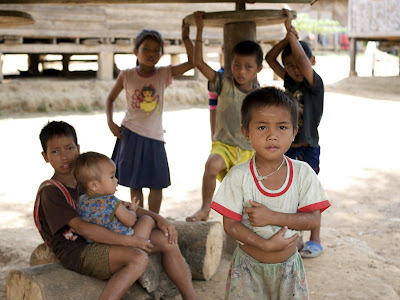 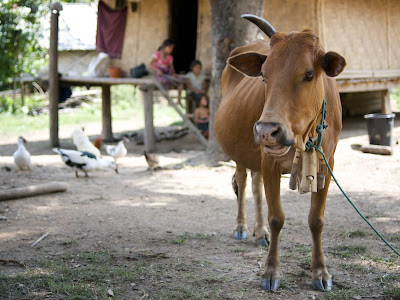 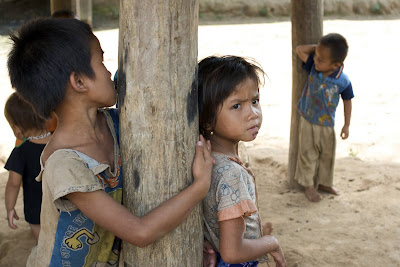 Childhoods are truncated in Houy Palam, since they began reproducing as soon as they can. Attempts to educate them in contraceptive techniques have met with limited success - showing people how to put a condom on a banana doesn't quite register, and nine months later it turns out that a fully sheathed piece of fruit next to the nuptial bed doesn't actually preclude you from making babies. 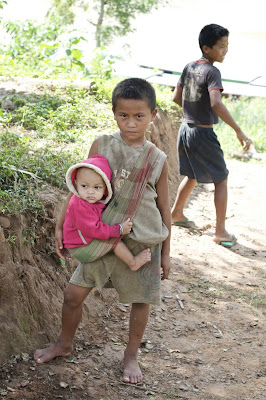 A picture like this can seem a little odd to our prying western eyes. But who are we to contradict nature, who creates us and adorns us with the powers of procreation whenever she sees fit? Kids grow up differently here - it's impossible to gauge their ages, and you only have to look at their faces to see they are far older and worldly wise than a cursory glance would suggest.

Western childhoods have been practically abandoned to the modern world anyway; at least here they get to enjoy a pure, free pre-adolescence before assuming their natural roles. As we prepare to leave, most of the boys have headed down to the river. Naked or at best scantily clad, they laugh, shout, jump and play with wanton joy and abandon, completely uncorrupted by the trappings of modern youth and, for the moment at least, blissfully happy. Downstream in Kohk Ek there's a different feel. They're selling stuff, for starters, and we are accosted by silk bearing women as soon as we step off the boat. It feels less welcoming here, and I'm not comfortable getting the camera out. Maybe they call it progress.

Wandering between the stilted houses, the children are conspicuous by their absence. Are they toiling in the fields, we wonder? But no; at the far end of the village is a school, and 150 kids are in their little classrooms, studying Laotian, English and History. There's not a sound from any of them, and their only signs of inattentiveness come when they peek through the slats in the walls to gawp back at us the way we've been gawping at them. 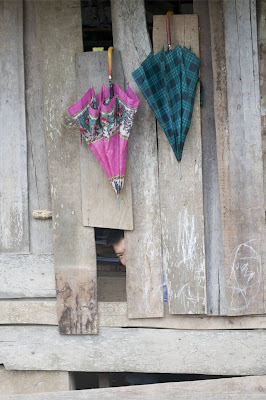 My only regret? That I didn't leave every last cent in that box back in Houy Palam.
Posted by Joe at 05:17