There's no official border between North and South Korea, just the Military Demarcation Line from the armistice of 1953. Two kilometres either side of it is the DMZ: the Demilitarized Zone. The Cold War might have thawed out everywhere else, but the Korean divide is still the most militarised frontier in the world, and as frosty now as it ever was. 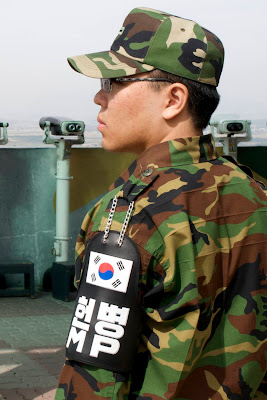 Just outside the DMZ, you can descend 350 metres into the ground and walk (well stoop) along a damp, narrow tunnel, discovered, in 1978. A North Korean incursion tunnel, it is one of four that have been found, and there are believed to be around ten more. The North Koreans rubbed coal dust along its walls and claimed it was a coal mine, despite the fact there is no coal anywhere near it.

Above ground a sculpture depicts a world being put back together, a map of the Korean peninsula in its centre. Visitors sit through a short film which punctuates the history of the region with gushing talk of reunification and reconciliation. 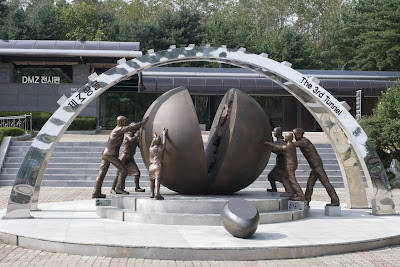 A few miles away is Dorasan Station, rebuilt in recent years. Walking around the plush, modern but deserted terminal, you can't help but think how ridiculous the whole thing is. There are even fake train times flashing on a board and a platform sign showing trains to Pyongnang. It may be a powerful symbol of hope for the South, but it seems little more than naive sentimentality when the other guys are torpedoing your warships and digging secret tunnels big enough to drive armies through. (North Korea has a population of 25 million, but one of the five biggest armies in the world). 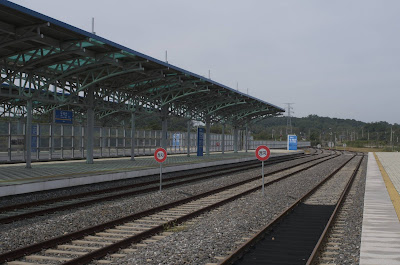 Cast the politics aside and what remains is a human tragedy. Barbed wire fences are strewn with coloured ribbons; some in memory of those who died in the war, others for family members stranded on the other side when the country was split in two. 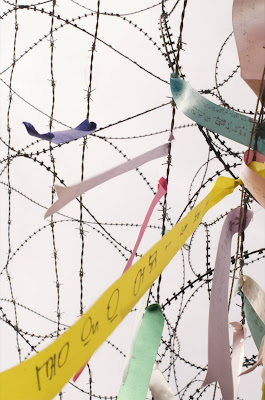 An old train riddled with bullets, a relic of the War, is preserved nearby. It's a sad memento of a conflict that never actually ended; the two sides are still technically at war and hostilities persist. The sinking of a South Korean Navy vessel in March was only one incident in a long history of skirmishes that make reunification seem little more than a dream for now. 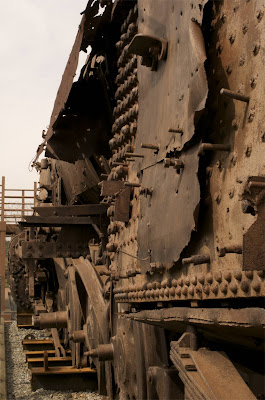 It's hard to envisage drastic change any time soon. The North remains under the control of the world's barmiest regime; a brilliantly scripted comedy, were it not so tragically real (the Party conference this week was the first for thirty years). Until that changes, the people of North Korea will continue to suffer and the children of the South won't get any closer to their countrymen than a school trip to the Dora Observatory. 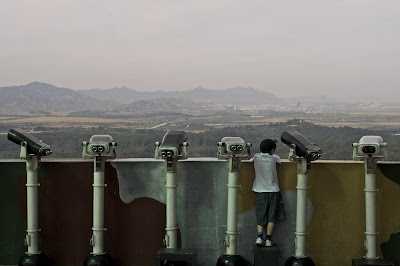 Save for a few outposts and some furtive tunnelling, a thousand square kilometres of the Korean peninsula has remained largely unmolested for the last fifty seven years and a unique natural environment has flourished in the human vacuum. As the dream of reunification persists, along with the imbecilities, the flora and fauna have had a field day in the man made chasm that divides a nation.
Posted by Joe at 18:06

Email ThisBlogThis!Share to TwitterShare to FacebookShare to Pinterest
Labels: Korea