On the first floor of a pretty grim looking building in Mong Kok, Hong Kong, there is a kitchen. It is owned by a lady named Martha Sherpa and in it, she teaches people how to cook Chinese food.

Some people are good cooks, some are good teachers. Martha is both. She is also an absolute, one hundred percent, no-nonsense, ball breaker. Turn up late, she won't let you in. Ask her something too many times, she'll stop telling you. Chop your ginger into matchsticks instead of fine julienne, she makes you slice them all in half. I want to hate her for it, but I can't.

My first day with Martha is a dim sum class, all pork based. We start with the preparation: lots of very fine chopping and dicing. With a cleaver, which takes a bit of getting used to, and needs a lot of practice. You can't rock the blade like a western knife, so have to chop almost vertically, using just the last couple of inches of the blade. Don't try it at home...

First up are boiled pork and vegetable dumplings. They're pretty easy to assemble, like big cappelletti. She shows us how to fold them to plump up the centre though - if you're selling them on the street, you want to make them look like they have more filling than the next guy's. Genius. They're served on dark pickled vegetables with a spicy dipping sauce, and are absolutely delicious. 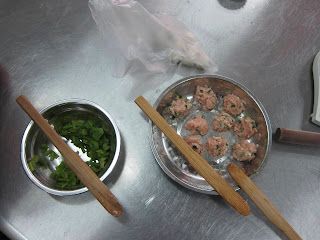 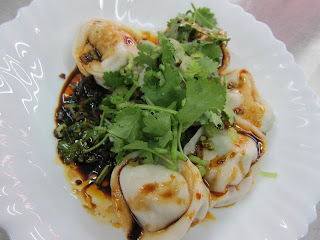 We make potstickers, fairly straightforward until you fry them, where you have to creep the fine line between crispy golden brown and burnt to a crisp. 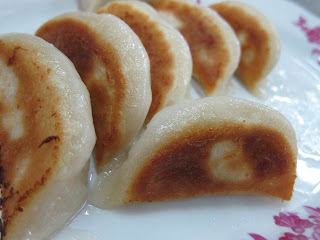 Next up are two buns; one fried, the other steamed. Both doughs are fairly easy to work with, so rolling them into two inch rounds is probably easier than with the first ones. You have to be quick though - you can't overwork it or it heats up, but you need a perfect circle, with a thicker centre, and a slight concave shape. All in just eight turns of the dough in your left hand, and eight rolls of the pin in your right.

The shaping of these is easier than it looks, though getting them to twist shut is less simple. The steamed ones have opened at the top after proving, so that'll take a bit more practice. The fried ones are good though - crispy on the bottom, a lovely soft dough with a shiny finish and a perfectly seasoned filling. The steamed guys turn out great, just open. "Practice with dough, not pork," advises Martha. "It will be cheaper for you." 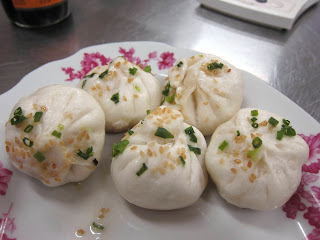 So far so good. Last up, Siao Lung Bao, steamed mini dumplings with pork and soup. The soup is solidified with agar agar and mixed in with the stuffing. Easy enough. But the casings are the real issue here. For the other four, you use fifteen grams of dough for each one. Here, you use five. That means rolling to a third of the thickness, which is nigh on impossible.

We make twenty little five gram balls of dough, in the hope that six of them might grow up to become paper thin, perfectly circular dumpling cases. They kind of did. Just about. Making them, I was thinking, with some confidence, that at least I will never have to do it again. If I do, and you're the one I'm making them for, you must be very, very special indeed.
Posted by Joe at 07:55