The worst (but greatest) game you never saw

One of my favourite quotes of all time is from Sir Richard Turnbull, the penultimate Governor of Aden. He once told Labour politician Denis Healey that,

When the British Empire finally sinks beneath the waves, only two monuments will be left standing: the game of association football, and the expression, "Fuck Off."

Like everyone else they came into contact with, the British had a pop at the Bhutanese, but ended up leaving them alone for political reasons. Maybe that's why football has never been Bhutan's forte. In fact, that is something of an understatement, since they are the lowest ranked national side in the world according to FIFA: 209th of 209.

Bhutan didn't play their first international match until 1982, and as recently as 2000 were beaten 20-0 by the mighty Kuwait. They have won four times in their history (62 matches), against Montserrat, Guam, Tibet and Afghanistan. But this year, for the first time, they’re in the qualifying rounds of the FIFA World Cup. Last Thursday, Bhutan upset all the odds by defeating Sri Lanka 1-0 in Colombo. Their shock victory was even reported in the New York Times.

I was on the same flight as the Sri Lankan national team on Sunday morning, and chatting to a few of the players I realised that the return leg was during my stay. I begged and persuaded Ugyen and Chencho to ditch a few "cultural" activities and take me to the game instead. What, after all, could get me closer to a nation's heart than watching them compete in the biggest football match in their history?

This is only the fourth international match to be played in Bhutan. Schools and government offices are closing early so they can make it to the Changlimithang Stadium, as modest and unusual a ground as you are likely to find. 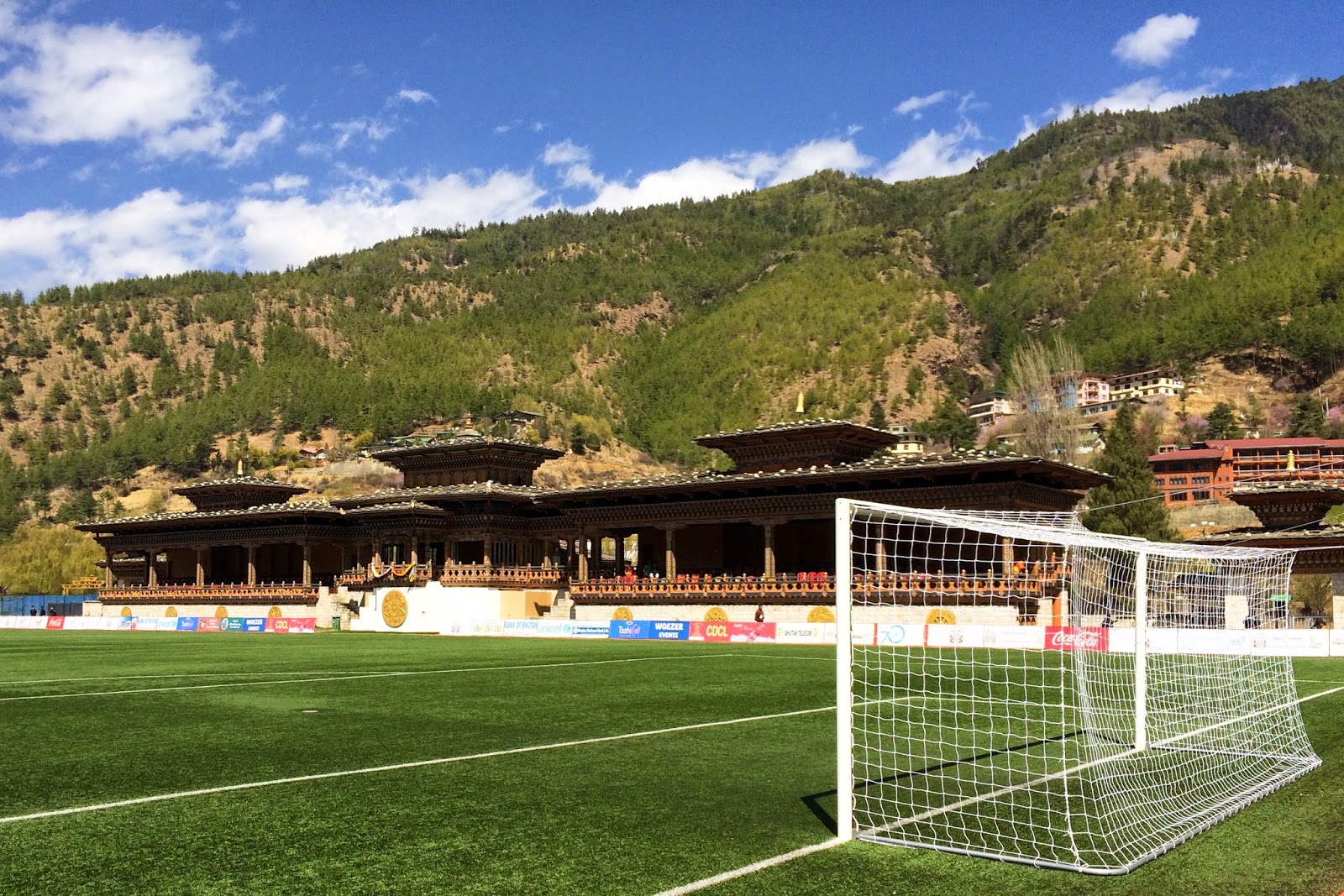 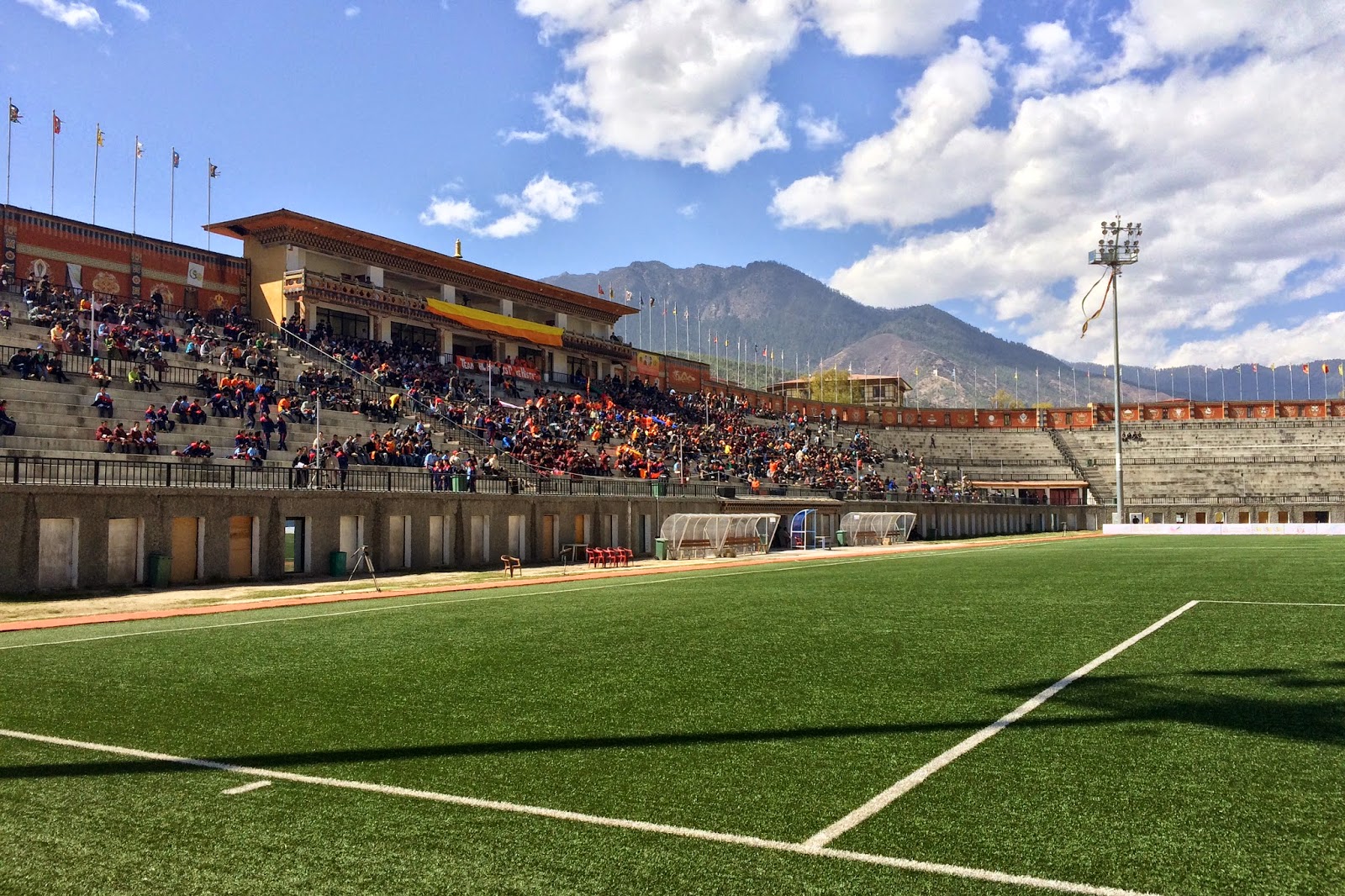 There's a real buzz around town as we walk to the stadium, two hours before kick off. "This place has a lot of history for our people," Ugyen informs me, as we take our seats, "There are dead bodies under the pitch." Indeed, in 1885 it was the site of the final battle of a Civil War and led to the future King, Ugyen Wangchuck, unifying the country. It doesn’t get much more meaningful than that. The fervour rises as kick off looms. The players of both teams are greeted with wild cheers and screams. As are, surely a first, the match officials. The grandstand overflows with people, squeezed in like a Guinness Book of Records attempt. There is no health and safety gone mad here, quite the opposite; every gangway has been utilised for extra capacity and the toilets and exits are beyond everyone’s reach. With the gates closed, people are climbing trees and scaling walls to gain a vantage point. Down on the pitch the pre match action is restricted to some guy in a gho kicking footballs at a couple of stray dogs. 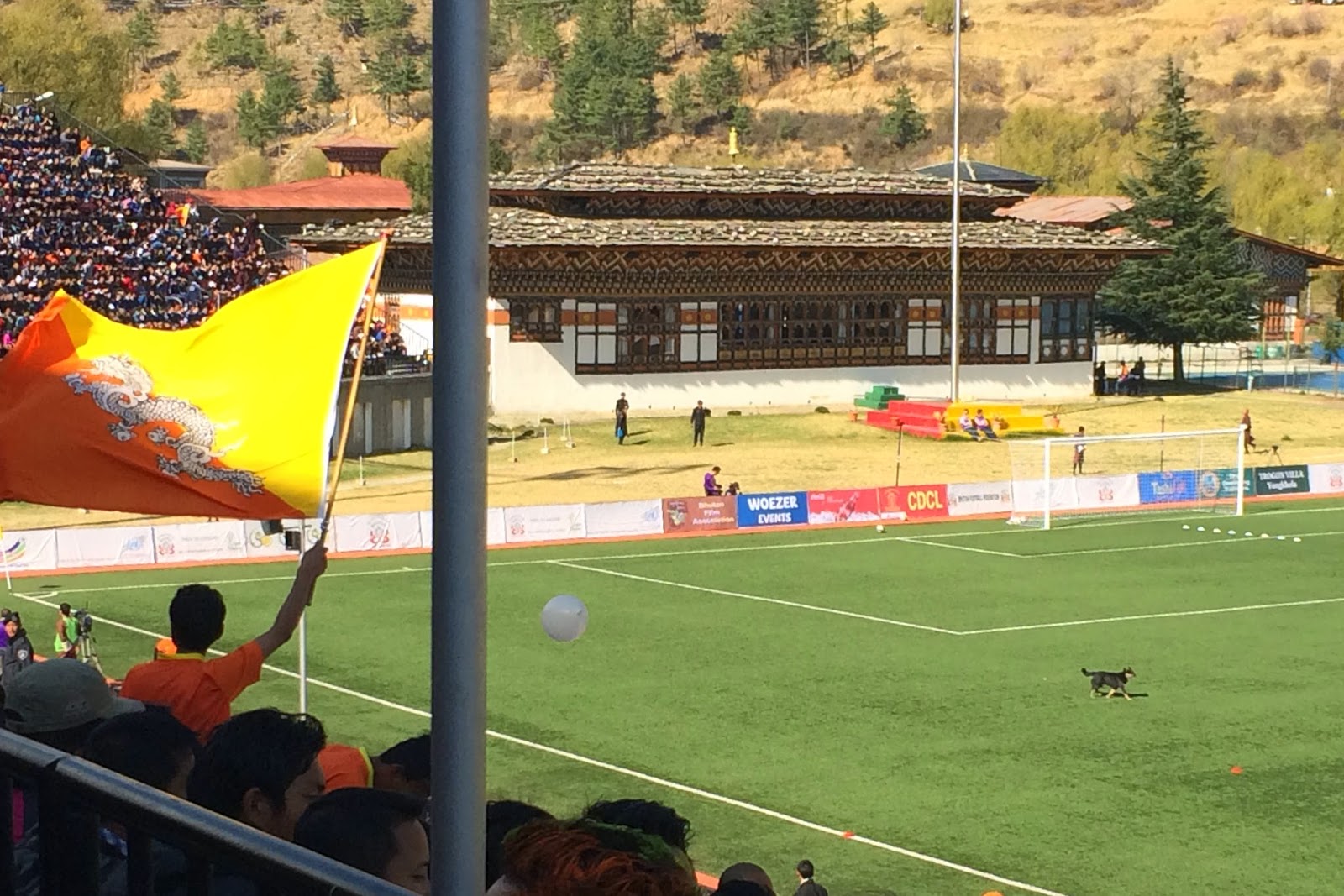 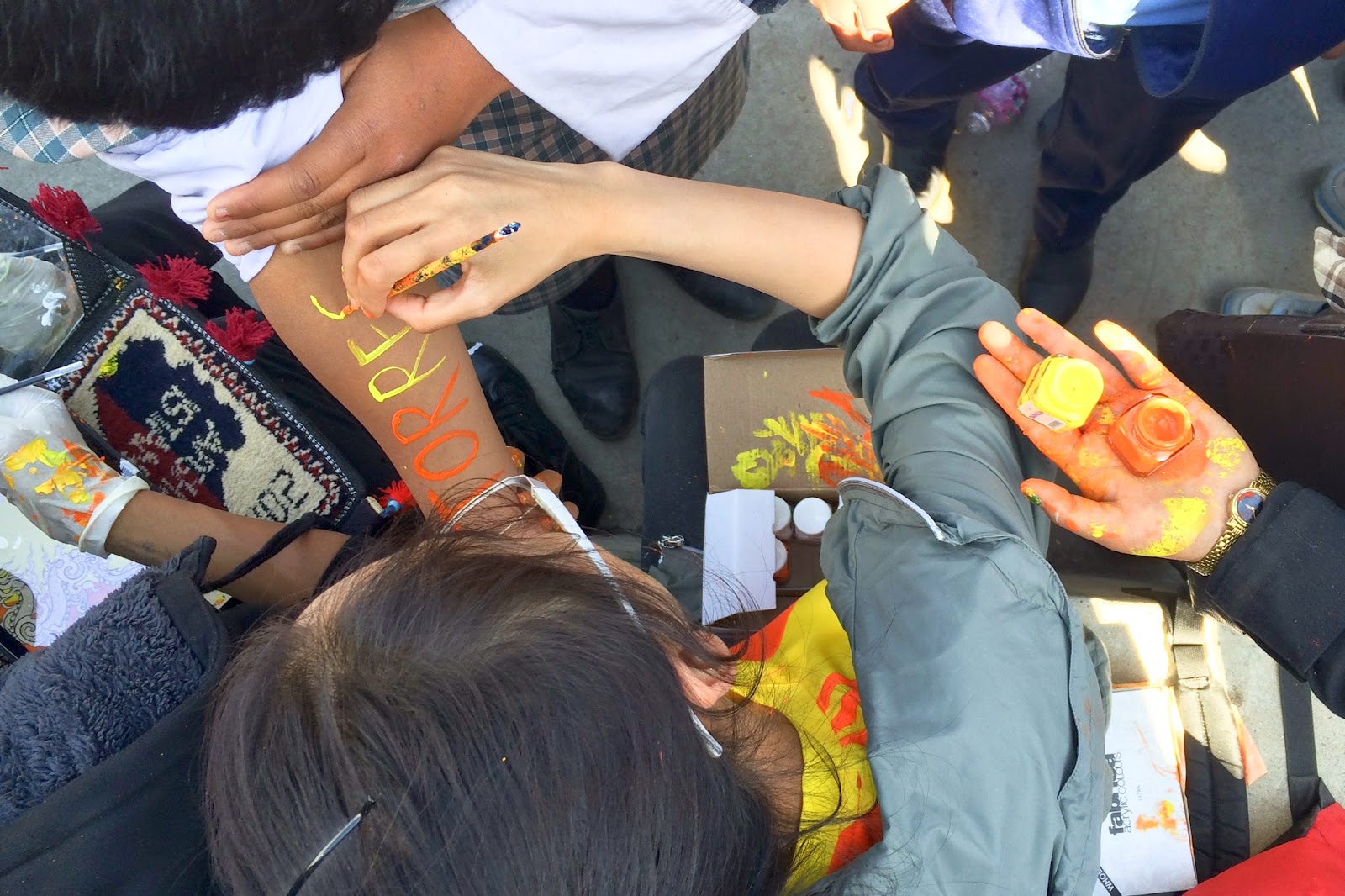 When the game finally gets underway I realise that, in the excitement, I have overlooked the standard of football I was about to witness. Both sides were palpably nervous, and the opening minutes reminded me of my first ever match, as a nine year old; twenty kids running around the park in a pack, chasing after the ball wherever it happened to be.

The pattern was broken spectacularly though after five minutes, when Chencho Gyeltshen, the Ronaldo of Bhutan (he has greasy hair), was sent through and coolly flicked over the initially hesitant, then suddenly over committed, but always badly positioned, Sri Lankan keeper. The reaction was predictably jubilant. 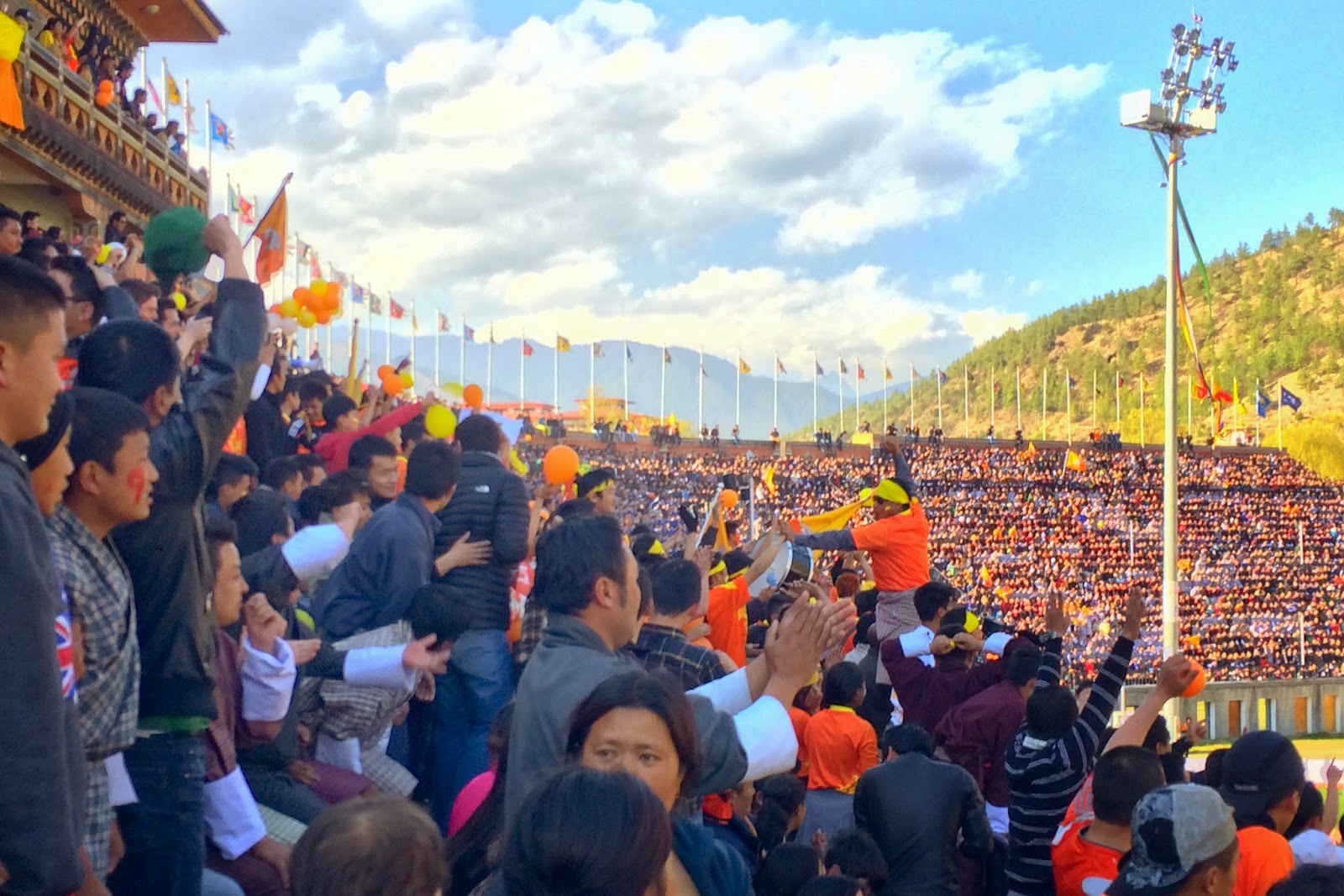 The rest of the first half was diabolical, and things were looking bad for Bhutan as the two guys I sat next to on the plane (the Sri Lankan Ronaldos) carved open the home defence time and again, a bundled in corner eventually drawing them level. Bhutanese Ronaldo attempted to equalise directly from the restart, but like most shots, corners and free kicks, his effort sailed hopelessly wide.

I don't know what went round the dressing room at half time, but it was a different Bhutan that emerged from the break, stretching Sri Lanka's woeful defence with purpose if not proficiency. The Sri Lankan Ronaldos went quiet as the altitude began to take effect.

Bhutan re-took the lead on the hour with a brilliant effort, or so we thought. I might have been the first to notice the linesman's flag and as is so often the case, it was NEVER offside. The officials, from Saudi Arabia and Kuwait, must have been drafted from the same lowly end of the pool as the two teams. The ref frequently found himself bodychecking players or having the ball ricochet off him, and wasn't even looking when substitutions were made.

"BhutannumbertwentytwoOFF," the guy behind me had been screaming for most of the match. He had a point, but Bhutannumbertwentytwo got the chance to ram those words back down his throat when put through clean on goal. Twice. His woeful misses would have been funny if I hadn’t struck a sneaky little wager on the outcome. The double goal line clearance at the other end was more enjoyable.

An historic and deserved victory was finally sealed in the ninetieth minute. With Sri Lanka pressing hard for the winner they needed to avoid elimination, Bhutan broke quickly and Chencho kept his cool to slot home a second before being engulfed by his teammates. We fought our way through the crowd, me towering above most of them, some staying to celebrate as others scrambled the walls in scenes reminiscent of Escape to Victory. 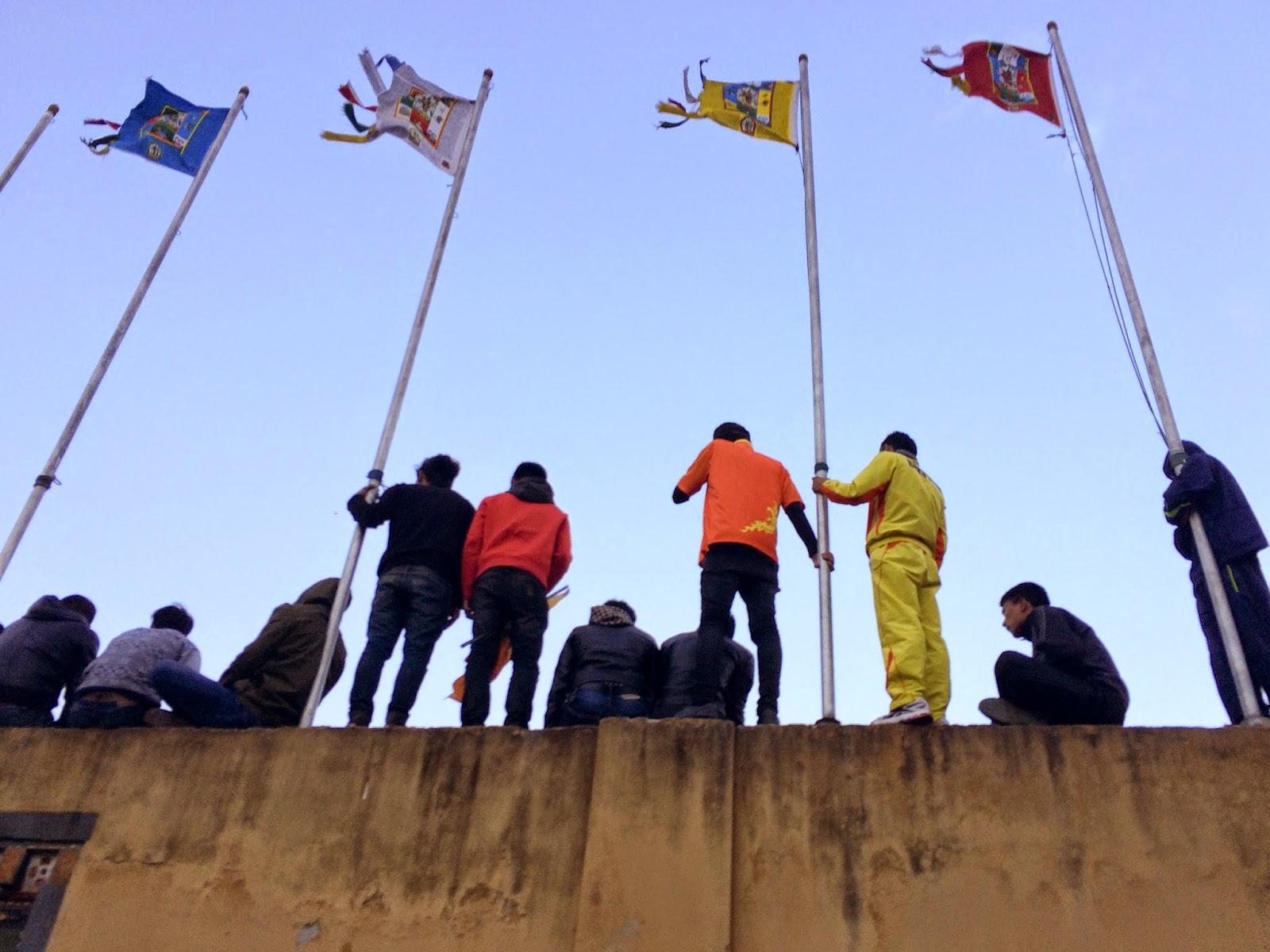 Before the match, Bhutan’s captain, Karma Shedrup Tshering, had said the squad were not getting carried away:

Everyone was talking about us being at the bottom but we didn’t feel any pressure because you can only go one way from there, and that’s upwards