To most people, the word Calcutta invokes the miserable Black Hole, a military prison cell in which an unknown number of Europeans perished, or the image of a saintly, geriatric Mother Teresa picking her way through the desperate slums.

Kolikata was a riverside fishing village before 1690, when the East India Company built a fort there. It flourished, and Calcutta became the capital of British India until 1911. You can't colonise or control a foreign land without the collaboration of local people, and the British were masters at eliciting it. They took control of Bengal by exploiting the treachery of Mir Jafar, a lieutenant of the Nawab, and having gained power, kept it by appointing co-operative locals. Their influence is everywhere, from the fine heritage buildings dotted around the centre of the city, to the vast expanse of green, the Maidan, in its midst.

In Calcutta, unlike most places I have visited in India, I carried on the British tradition, and enlisted some local help. Saurav, or Sol, Chatterjee, a gentleman of the finest substance and character, has shown me how to live the high life here. I can’t bring myself to call it Kolkata, because this is still, defiantly, Calcutta.

The long trousers and polo shirt got a rare airing as we toured from club to club. Beginning with a few (dozen) drinks at the Calcutta Cricket and Football Club, founded in 1792 and the second oldest cricket ground in the world after Lords. We played tennis on the grass courts of Calcutta South Club, once considered the finest outside of SW19 and known as the Wimbledon of the East. (I graced them not with the panache of Federer so much as the petulance of McEnroe.) We sipped Bloody Marys throughout an extended lunch at the Royal Calcutta Golf Club’s pavilion at the Maidan, in front of the only bowling green in town, naturally. I have enjoyed the friendship and hospitality of a truly wonderful group of people. 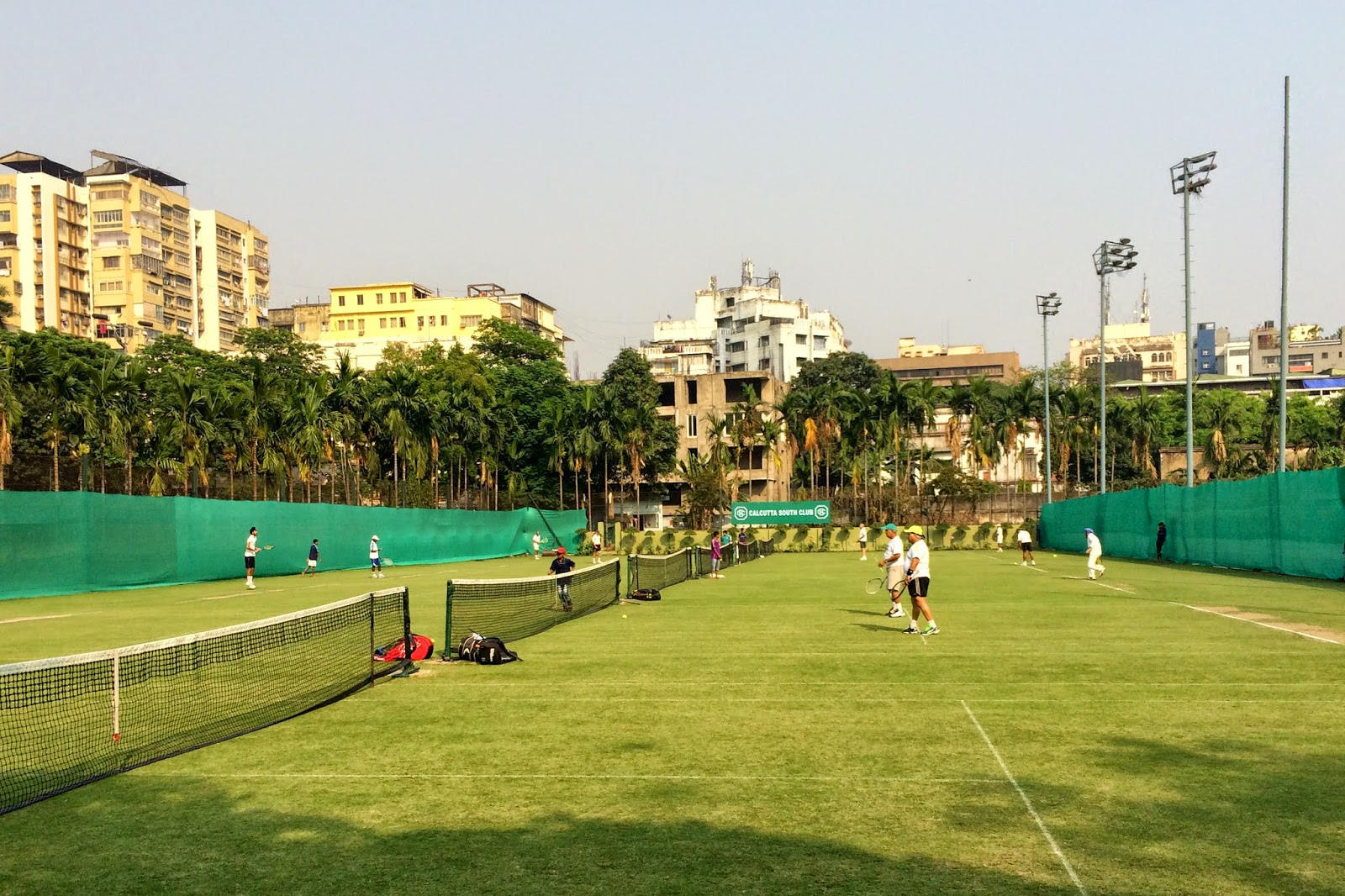 Sol has put me up in a guest room at the Saturday Club, an old colonial haunt in the centre of town that has a badminton court in the middle of its main room and a fine verandah that must have seen a gin and tonic or two dispatched in its time. I added a couple more to the tally. It is pure Graham Greene.

Realising that I’d spent my entire time either playing tennis, eating, drinking or sleeping off hangovers, I dragged myself off around town on a heritage walk entitled Confluence of Cultures. We met next to a burned out car, and proceeded to wander among the “Grey” part of town, between Central, the “White” town of the Sahibs, and the “Black” town of the Babus. 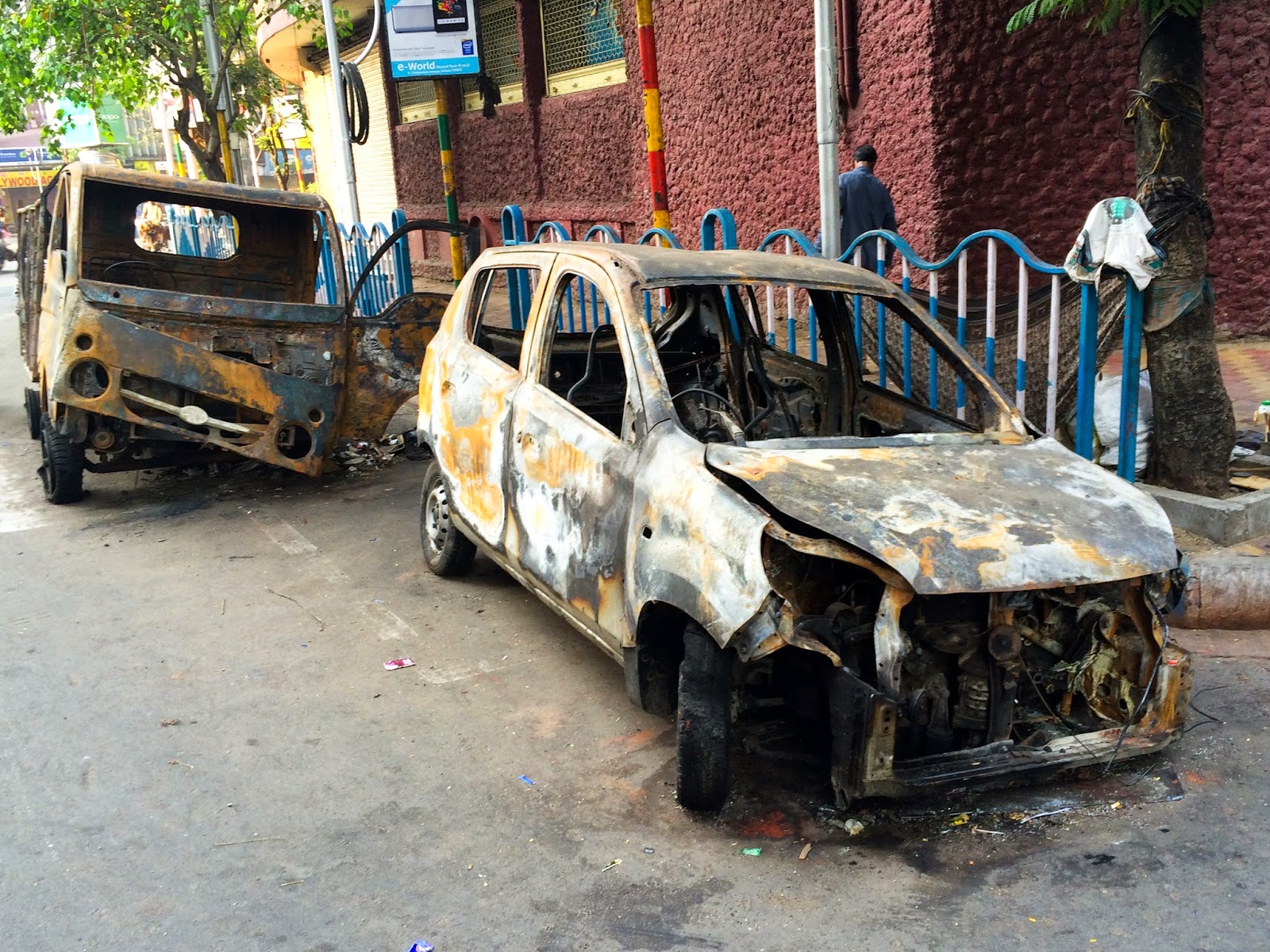 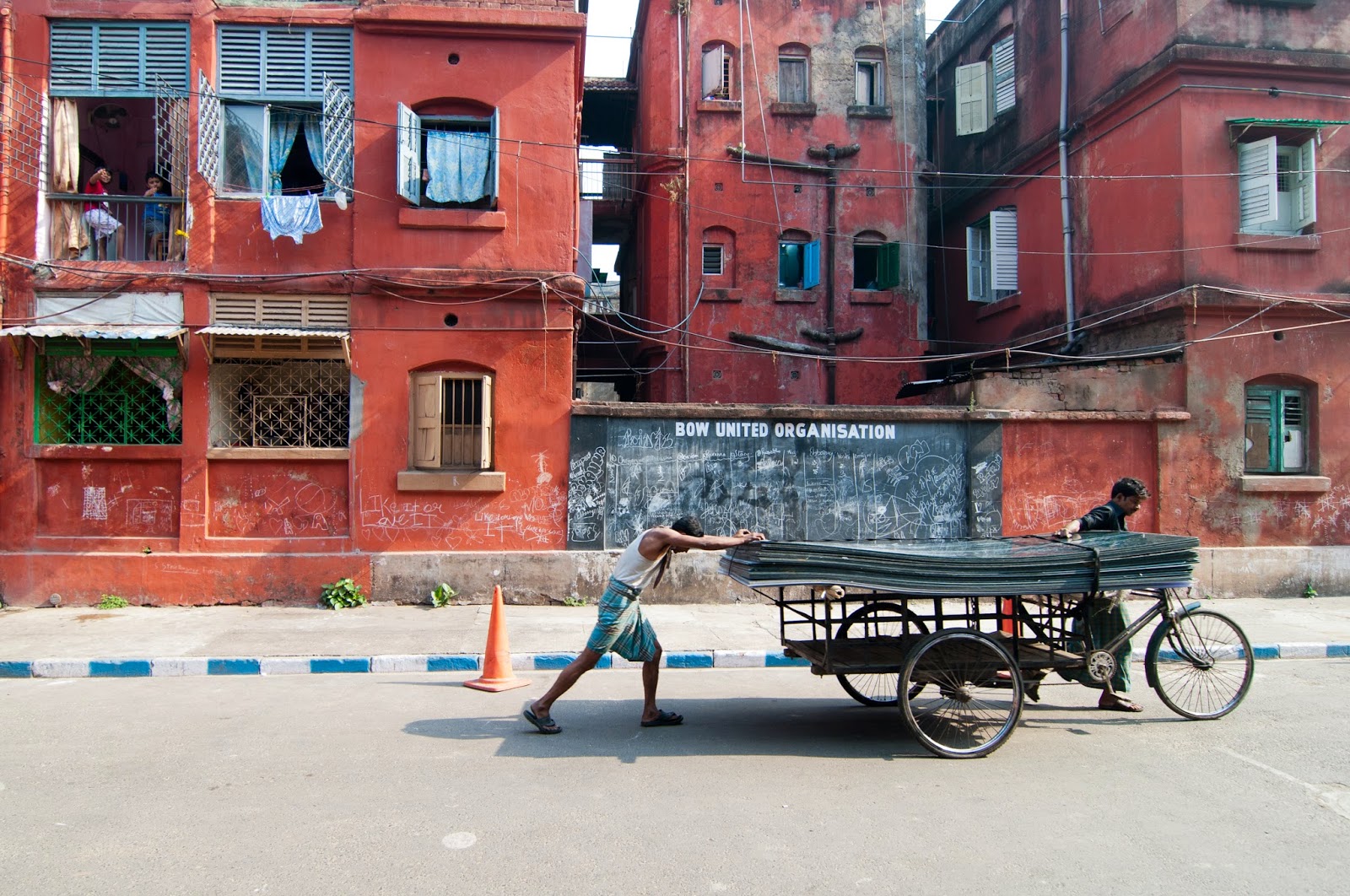 The real story of Calcutta lies within these few blocks, where religions and cultures from all over the world jostle around the grotty bazaars. On our short stroll we pass churches of every Christian denomination, a Buddhist temple, Zoroastrian fire temple (where the guy invites us in to show us some ferocious looking fish he is keeping down a well), a Chinese temple full of men playing chess and reading the paper and a Synagogue (there are only twenty four Jews left living in Calcutta, and three synagogues) that looks like a cathedral. In between them we wander through fairly impoverished backstreets complete with the occasional slum and plenty of street dwellers. 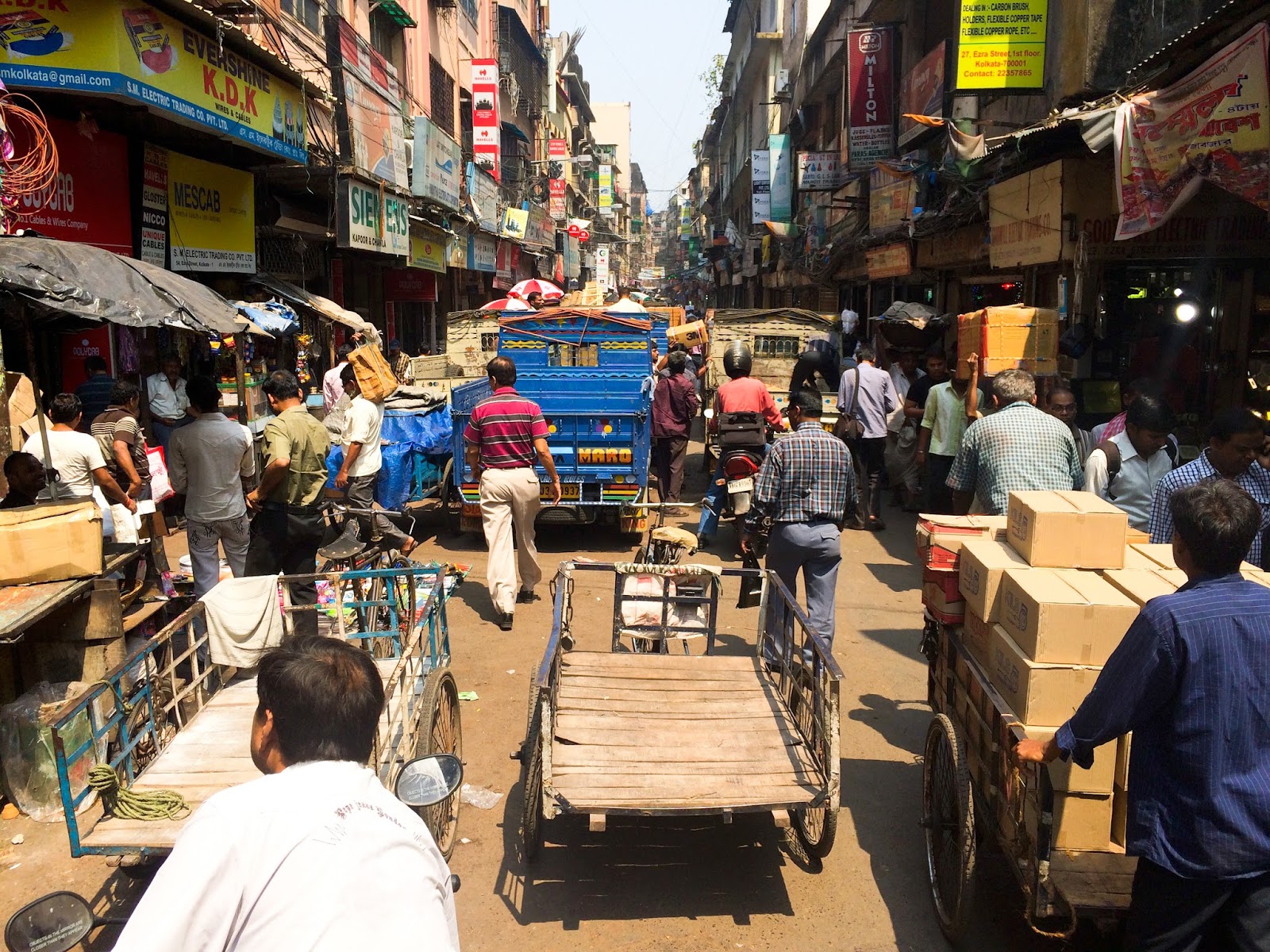 Calcutta was at the heart of the Bengali Renaissance in the 18th and 19th centuries; a movement to reform and modernise Indian culture, incorporating positive elements of Western ways. The movement itself was a confluence of East and West, and Bengalis still pride themselves on their strong literary, artistic and scientific culture. If the club scene, tennis courts and so forth speak of a desire to emulate London high society, then here is the real emulation – a bustling, multicultural, intellectual, pioneering and dynamic city, complete with inevitable poverty and attendant squalor. 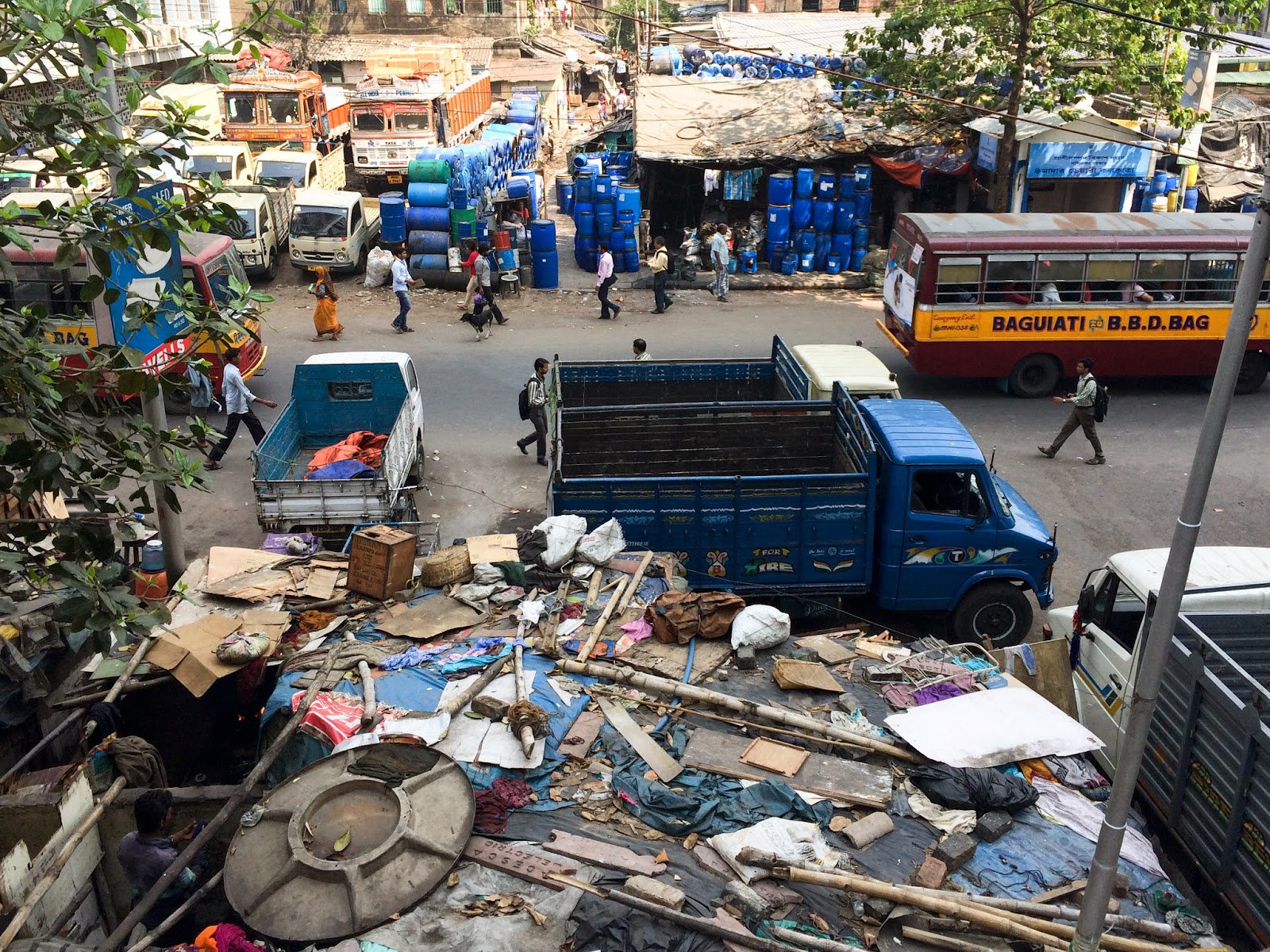 Calcutta seems somehow less chaotic than other parts of India. I found myself walking along (in) the road the other day, before realising that everyone else was on the pavement. Then I was chastised by some guy in a uniform for ducking under a rope to cross a busy junction. This is India, for fuck’s sake, I thought to myself. But it's not really - it's Bengal. And it's Calcutta.

It's not completely lacking in chaos of course, rather it has its own peculiar brand. At 1pm they reverse the direction of traffic on most of the main streets, completely disorientating me. And the ride to the airport this morning felt like a computer game, Calcutta Taxi Airport Death Race, perhaps. Through some of the poorest parts of town in an unresponsive old Ambassador, it was just another verse in a repetitive, but never boring, folk song about heart stopping Indian taxi journeys. (Called Never put your luggage in the boot of a Calcutta taxi). 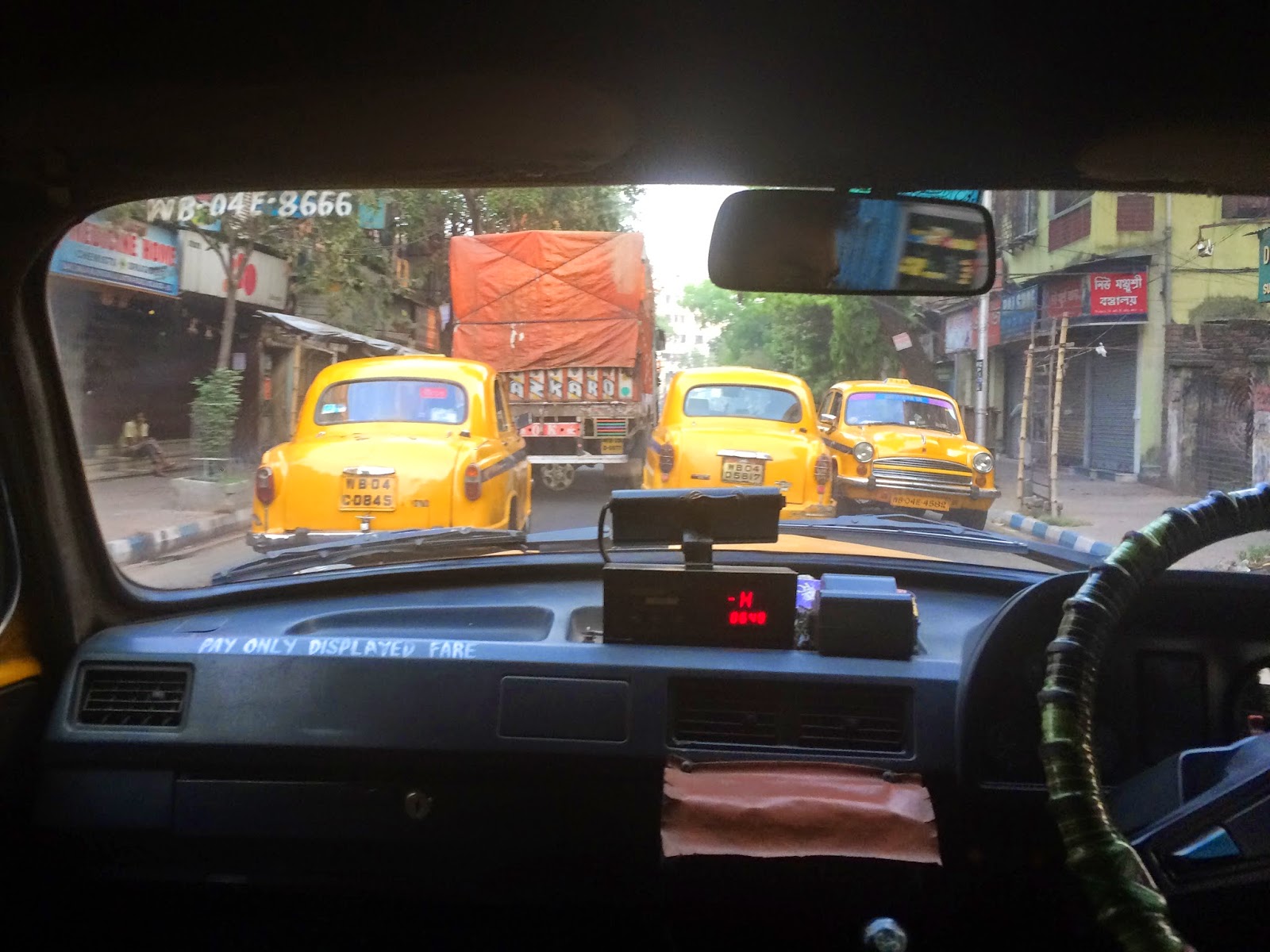 Last night was my last in India. Just before I went to bed, fairly pissed, I rang British Airways and enquired about delaying my flight home. In deliberating over whether or not to do this, and knowing that they shut at 8pm GMT, I asked the girl on the other end of the phone what time it was now. "Hold on sir," she said, in a suddenly all too famiiar accent, "I will just check for you."

"Where are you?" I asked, already knowing the answer, and smiling to myself as the decision made itself. I’m not finished yet, I thought.

But of course I am. Dictionary.com's word of the day this morning, flashing up on the iPhone as I sat waiting to board my plane, was knackered. I shot myself a knowing glance.

A little fresh air is bound to do me the world of good.