I’d been looking forward to my trip to Munnar, an old colonial tea station nestling in the upper reaches of the Western Ghats. It promised a change in climate as well as surroundings, after the brutal heat of Kochi and the sandy beach of Varkala.

The drive was breathtaking, and that had nothing to do with the view. My driver, Johnson, impressed me in Kochi with his expediency on the road and quiet, considered company. But his complete disregard for traffic conventions (even Indian ones) and perilous blend of ambition and optimism when overtaking didn’t transition well to the narrow roads and tight switchbacks that carried us higher and deeper into Kerala.

He drove as if compelled by an invisible presence to overtake everything in front of him regardless of speed or road position. The possibility of oncoming traffic, blindingly obvious or merely highly probable, was never entertained. When we did meet an oncoming vehicle, he let out a little whistle from between his lips and reluctantly, at the final possible moment, acceded. I really don’t think he felt responsible for his actions; rather he reacted as though he were the passenger, with some dark force inside him doing the driving.

It was soon clear that the volume and pitch of the whistling directly correlated with the danger. The loudest and highest came on an uphill stretch as we attempted to overtake a tuk-tuk that was itself already overtaking a petrol tanker, on the outside of a completely blind corner. There, we met a rusty old bus hurtling down the hill, its own driver on an apparent suicide mission, or perhaps just galvanised by the fact that he had “HOLYMARY” emblazoned across his windscreeen. I glanced at the rosary beads on Johnson’s dashboard, thought of dear old Ayrton Senna, and surreptitiously made the sign of the cross, just in case. 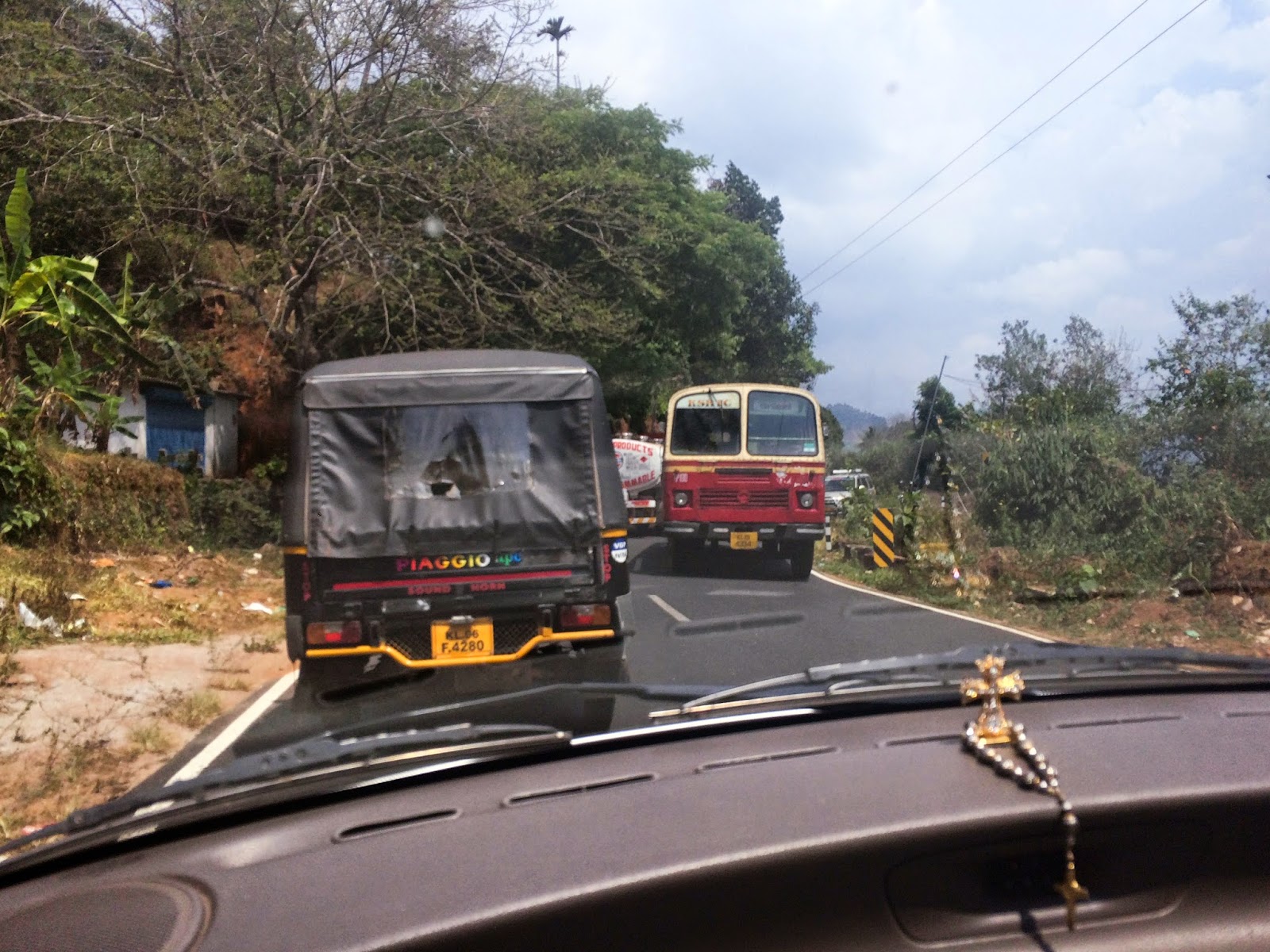 Meanwhile, and on a similar trajectory to the audacity and stupidity of Johnson’s driving, the scenery had become increasingly spectacular and neat rows of tea plantations were now etched into the green hillsides. Both driving and scenery were about to suffer a setback though, because as we slalomed our way towards Munnar, something happened that hadn’t happened since I left England: it started raining.

Just a few spots at first, but soon it was absolutely pissing down - big fucking raindrops, cascaded down the road in torrents and the whole place was transformed in a matter of minutes. Eventually, Johnson remembered he had windscreen wipers and I was briefly reassured, but never really stirred from the conviction that he was on some Ahab-esque quest and that being completely blinded by the rain had made no difference to his driving whatsoever. 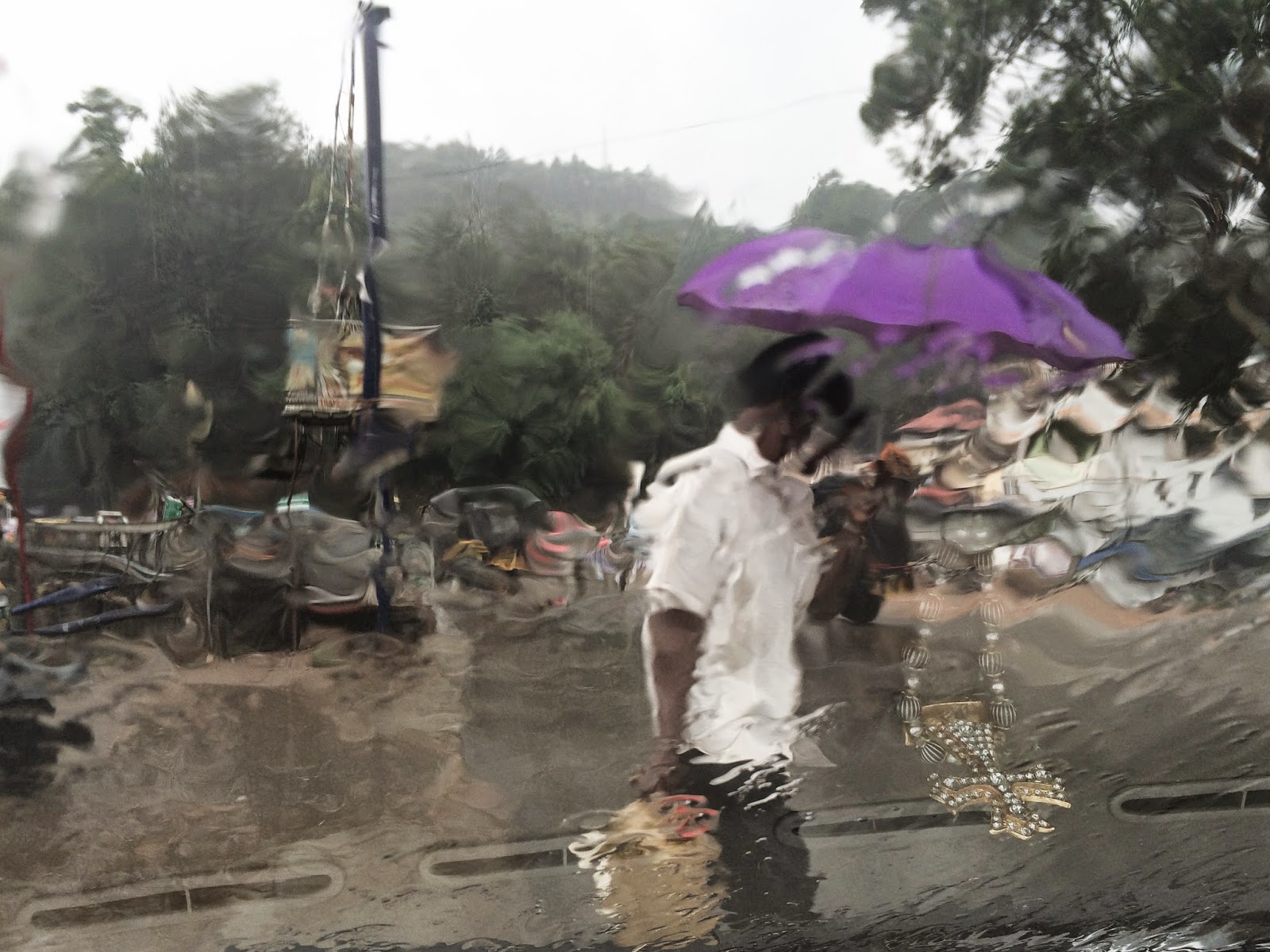 Finally, and miraculously, we arrived at my guesthouse: miles from anywhere, on a side of the mountain notable chiefly for the paucity of its view when compared to every other part of the mountain. Having ascended an outdoor spiral staircase to my room, bags still in reception, I did the only thing I could: stripped off my saturated clothes and climbed naked into bed. The rain hammered incessant, deafening blows down on the tin roof, but despite the reverberating din, a solitary, metronomic drip landing on the floor beside me sent me quickly off to sleep. When I awoke, an hour or so later, quite a large puddle had formed next to the bed, and it was dark outside.

Needless to say though, it was still fucking raining, and I was still in the middle of nowhere.
Posted by Joe at 21:26