As I Walk through the Valley


At three o’clock this afternoon I went for a walk, making my way along the western slope of the Phobjikha valley. I thought I’d walk as far as Domchoe Lhakhang, follow a trail across the marshy floor, climb up to another temple, and loop back to the hotel via the opposite flank. But I was neither sure of where I was going nor committed to this idea. I was just glad to be out there on my own.

I followed the “road” for a while as it ambled through the next village. Traditional Bhutanese houses, wooden and made without a single nail or screw, huddled together, chickens and toddlers playing in the yard. Most of the roofs are simply wooden slats, tied up with bamboo threads and weighed down with rocks.

School had finished for the day and out of the pine forests came little clusters of children. Most waved and said hello, some shirked away shyly or giggled among themselves. Some insisted upon having their photo taken. 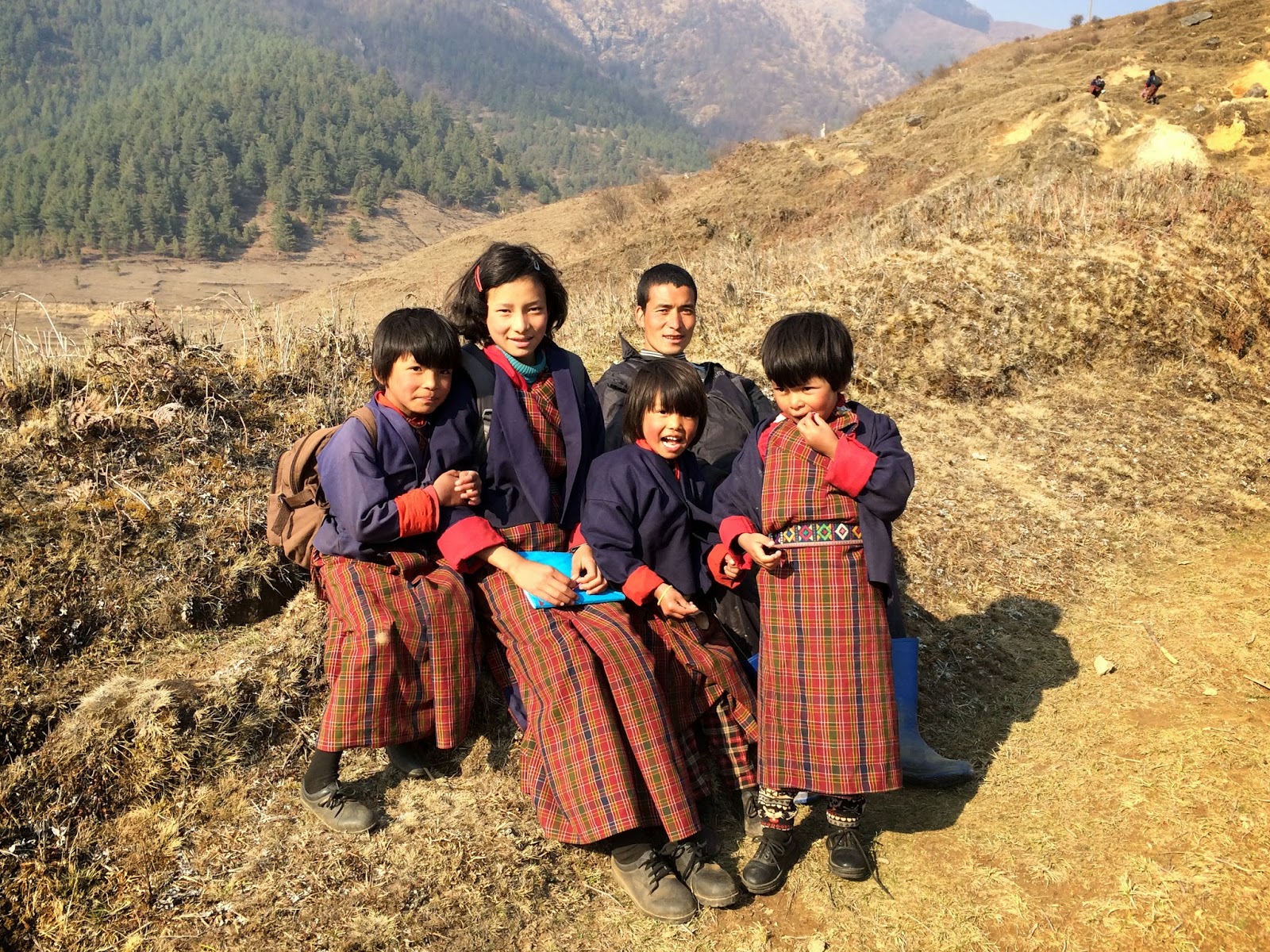 Those that did speak to me all asked the same question:

“Where are you going?”

Which was probably as close to the truth as I could have got if I’d spent a long time thinking about it.

What is a path though, but the means for some creature or other to get from one place to the next? I had already seen the schoolchildren following their own paths, criss-crossing the valley in their unique, expedient ways; individual routes that would carry them home. I looked hard into the distant bottom of the valley, and sure enough there they were, little groups of kids, probably on the trail I had meant to take, but had long since passed. 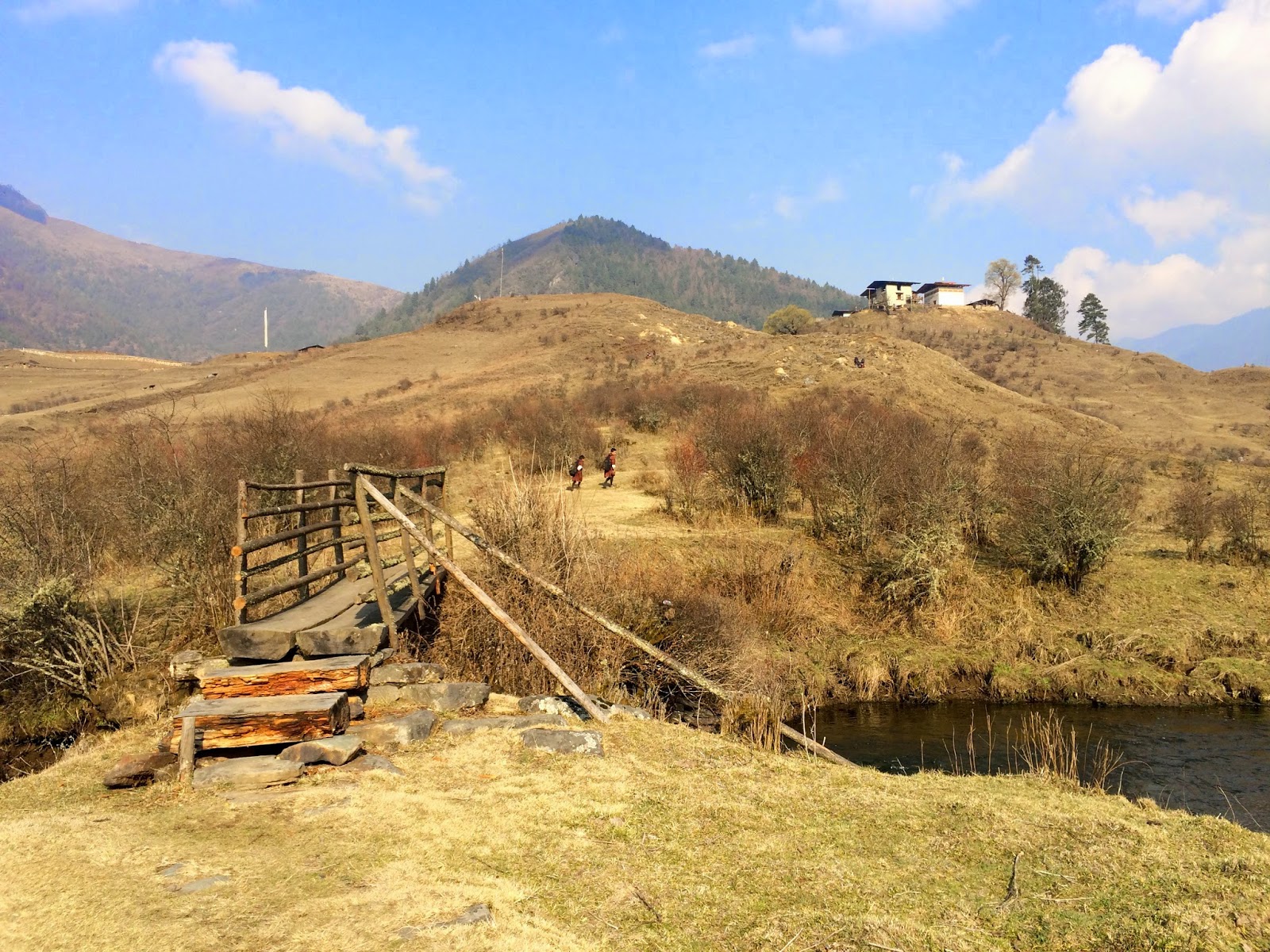 Without really deciding to, I found myself descending the hillside, sidestepping cow shit, tiptoeing carefully over boggy ground and joyfully leaping a few narrow streams. I emerged from my tangent to cross the main bridge they had all been heading for, and joined them in the steep climb up to the village. As I gained ground I looked back at the river below and the series of tiny oxbow lakes, and realised I had probably been quite lucky to pick a navigable route through them. 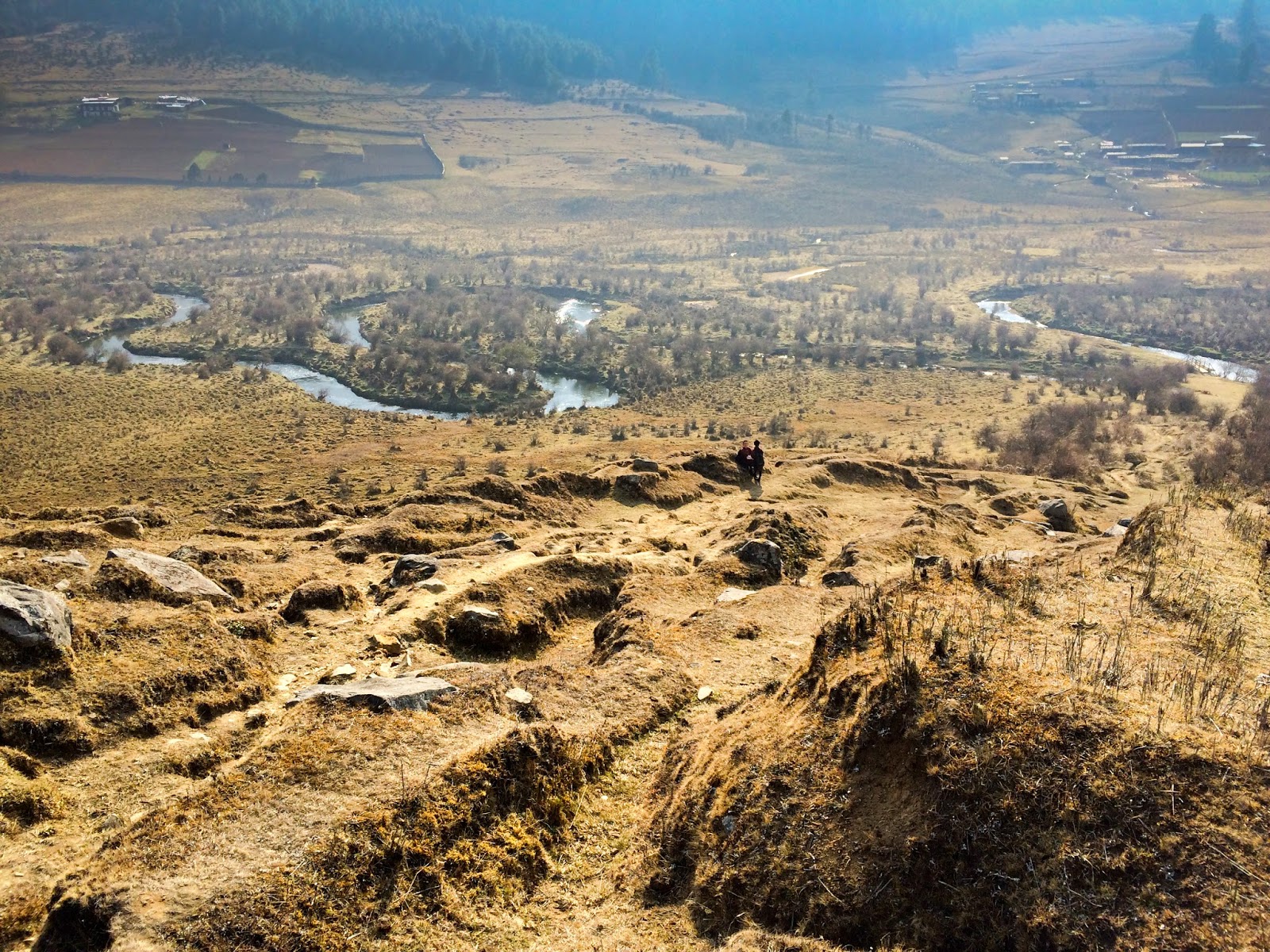 At the top I entered a village populated exclusively by cattle. Beyond them on the road some guys were playing darts, hurling their heavy, lethal projectiles at a scrap of wood at least fifty yards away. Buoyed by my earlier off road success, I cut across another field, only to meet an impassable stream and have to trudge back to the dusty road. 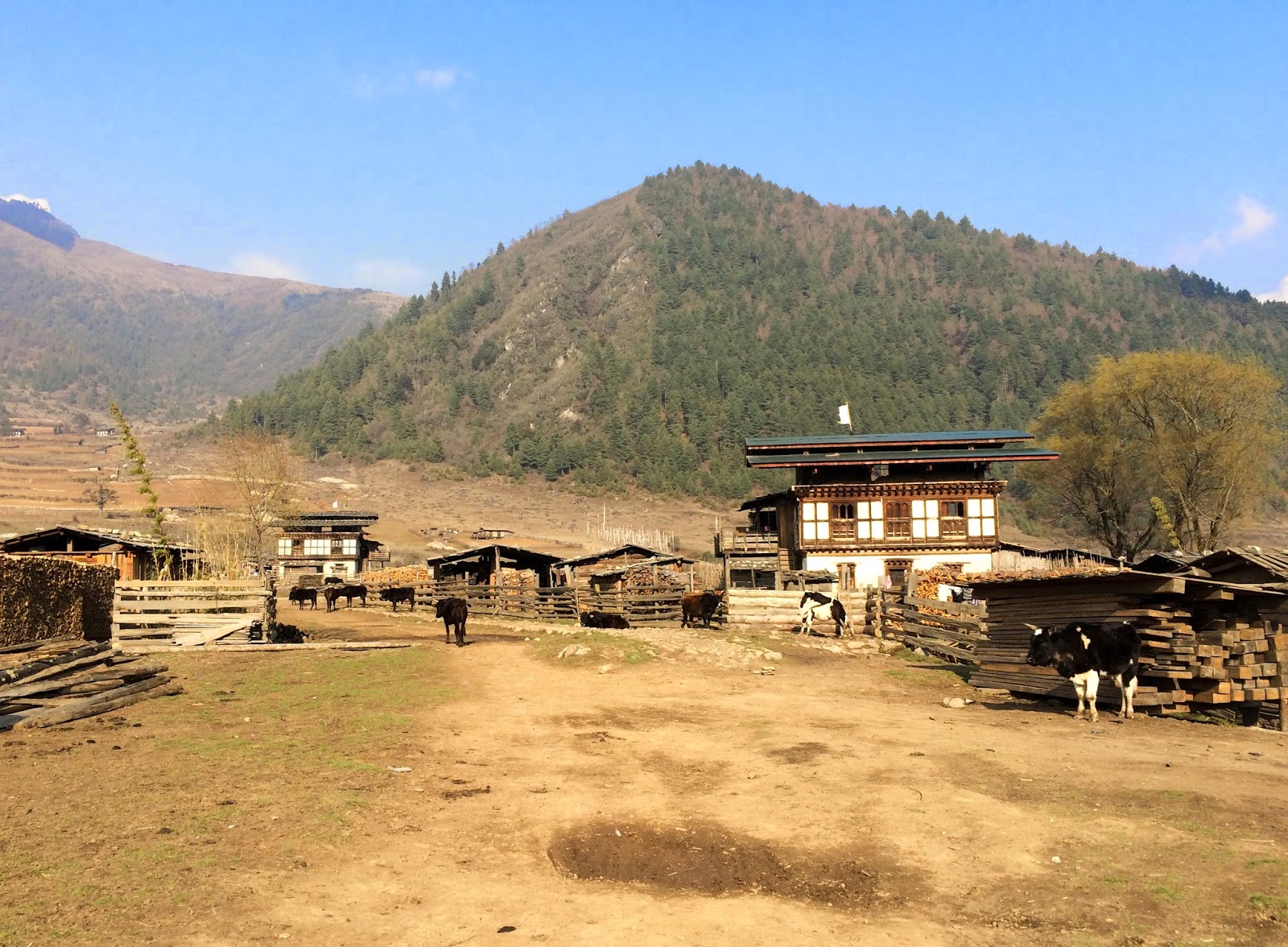 Back at the hotel I felt rejuvenated but a little achey, so I went for a traditional Bhutanese hot stone bath. A crude wooden tub is filled with cold water and herbs, while rocks are baked on a fire and dropped in to heat the water.

I knew all this, but what I hadn’t appreciated was that it would take place outside. And it is fucking freezing outside. 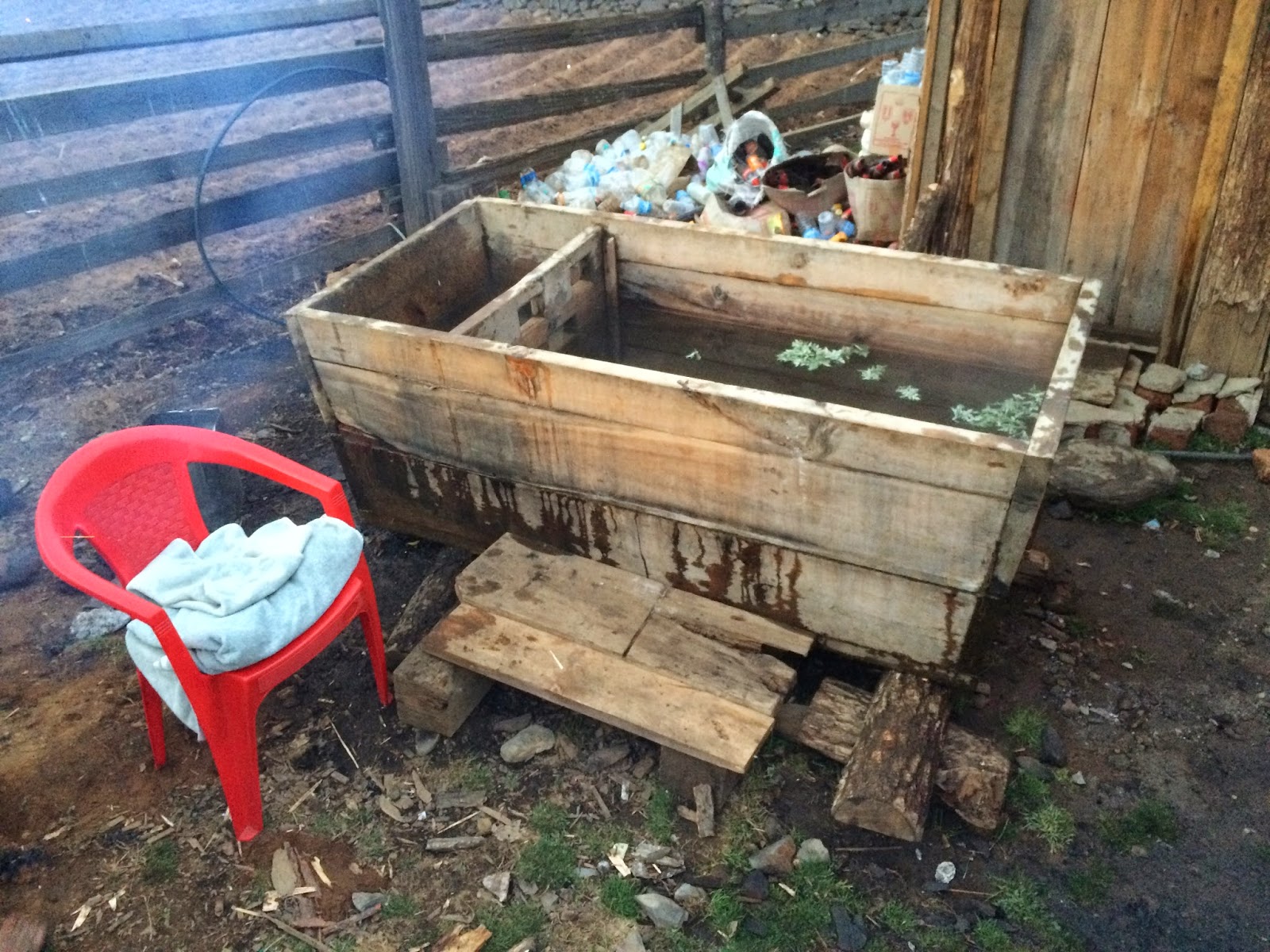 It was almost dark when I stripped and plunged into the scalding water. And it was another of those moments, travelling, when you suddenly view yourself from a distance and the complete absurdity of your situation overwhelms you with pure and simple joy. Bollock naked, in a wooden bathtub heated by red hot stones, engulfed in steam and smoke from the fire, in the pitch black, freezing cold night, outside a ramshackle farmhouse in a remote valley of an obscure kingdom in the Himalayas. Smiling. Really, truly smiling, inside and out. 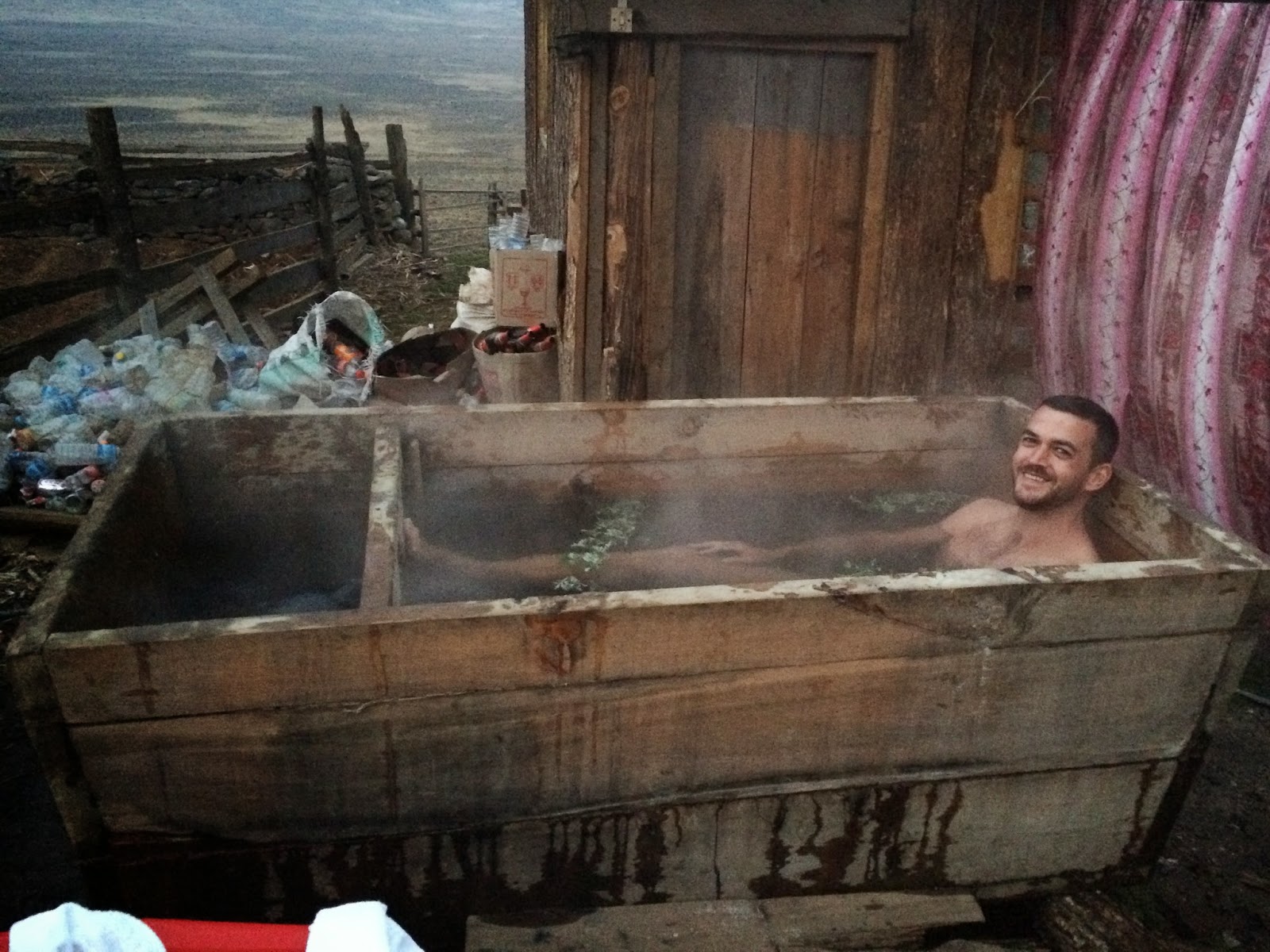 Before I went to bed I fired up the Bukhari, or log burner. Swaddled in the covers and extra blankets, I wondered what it is about walking that feels so good for the soul? It is such a simple action; one foot in front of the other. The most basic means of progress for man, and every step leaves some trace, the sum of them a path.

I turned this over in my mind, drifting off down the valley again into sleep, as the fire crackled away and the pan of water bubbled like a giant cauldron, boiling up tomorrow’s spells.

And then in the morning, as if by magic, I remembered this:

For untold thousands of years we travelled on foot over rough paths, not simply as peddlers or commuters or tourists, but as men and women for whom the path and road stood for some intense experience: freedom, new human relationships, a new awareness of the landscape. The road offered a journey into the unknown that could end up allowing us to discover who we were.