Walk along the streets of Fort Kochi and you’ll notice strange dark streaks that look as though they have been rolled into the tarmac. Protruding from them are small, metallic like beads. They are tamarind pods, fallen from the trees then trodden and melted into the asphalt to become part of the road.

And so it is with Kochi’s colonial past, trampled into the narrow streets where cathedrals, churches, mosques and synagogues all clamber for space among the ramshackle homes, pristine mansions and the faded, crumbling grandeur of everything in between. The first Portuguese explorers arrived in Kochi in 1500: a sun ravaged, motley crew of seamen, soldiers, and navigators who had traversed vast uncharted areas of the planet in search of riches. They found an already thriving spice port and a pioneering city with a rich tradition of astronomy and mathematics. The context of commerce, coercion, conquest and colonialism, masked a spirit of adventure and discovery.

Along the promenade at Fort Kochi, giant tankers and cargo ships pass in and out as noisy locals man the ancient Chinese fishing nets that yield a small catch of even smaller fish, immediately displayed for sale. Behind them, market stalls cluster in the shade of giant banyan trees, canopies overlapping, selling all manner of tat, while tuk-tuk drivers, restaurateurs, shop owners and spice merchants pester the tourists. Commerce is so deeply woven into the fabric of this place that literally everyone is on the make. 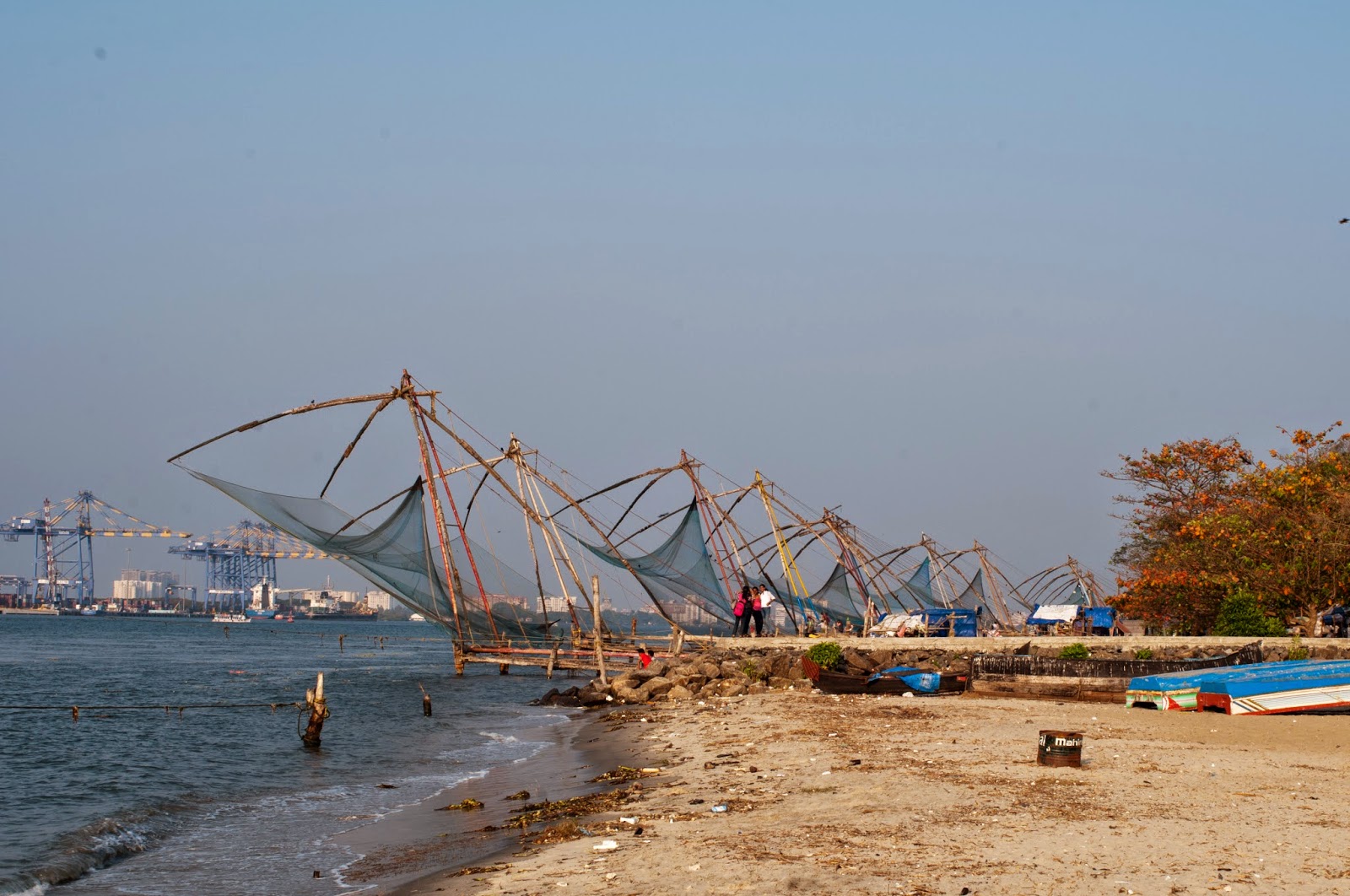 Kochi is hosting its second biennale and over a hundred artists from around the world have contributed to the only event of its kind in India. The theme this year is Whorled Explorations. In the words of the curator, Jitish Kallat:

In a very simple way I think the biennale does what we do every day when we try to see or understand something. We either go close to it or move away from it in space, to see it clearly; we also reflect back or forth in time to understand the present. Whorled Explorations draws upon this act of deliberation, across axes of time and space to interlace the bygone with the imminent, the terrestrial with the celestial.

From the first exhibit, the message is clear. Charles and Ray Eames’s 1977 film Powers of Ten: in which a one metre wide shot of a man lying in a park zooms out by the power of ten every ten seconds until it reaches the limit of the universe, from where it zooms back in by the power of minus ten, ending only when it reaches the sub atomic level of the man’s hand.

The art on display is more hit than miss, and some of the hits are emphatic. In Ryota Kuwakubo’s Lost # 12, a toy train with a single light on the front snakes around a pitch black room past household objects (toilet brushes, clothes pegs, colander, birdcage) gathered from the markets around town. Their silhouettes are projected onto the walls in a procession of shifting size and perspective that keeps you questioning what you are actually seeing - the ultimate projection being the interpretation your mind settles upon. Down on the scruffy beachfront, the litter has been gathered into a sculpture far less taxing on the subconscious. 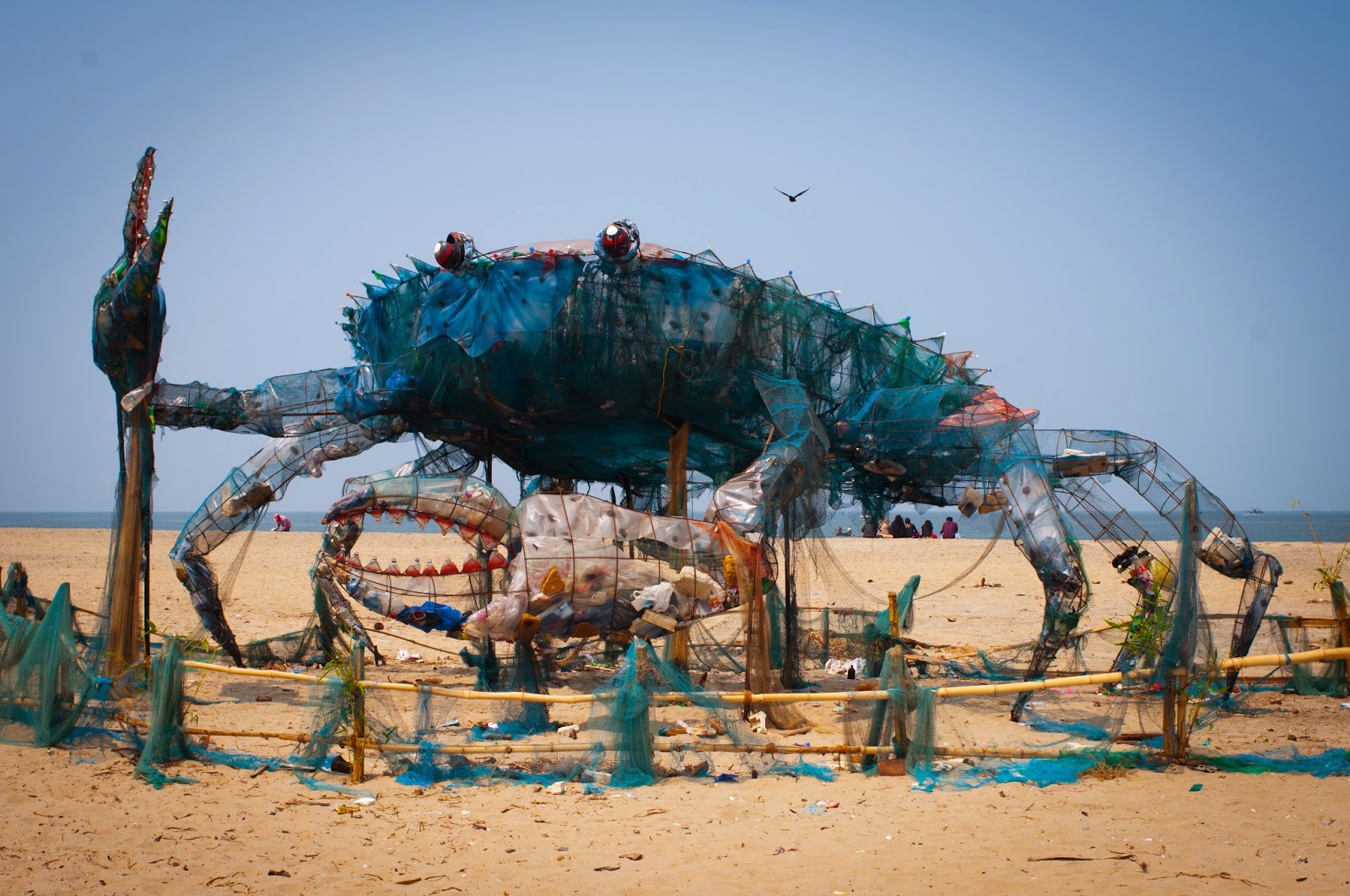 Theo Eshetu’s Anima Mundi - what initially appears to be a TV screen at the end of a square, mirrored tunnel - opens into a giant kaleidoscope of abstract footage that forms itself into a globe. It is hypnotic and compelling, drawing your countless reflections inside the innocuous looking aperture on the wall. 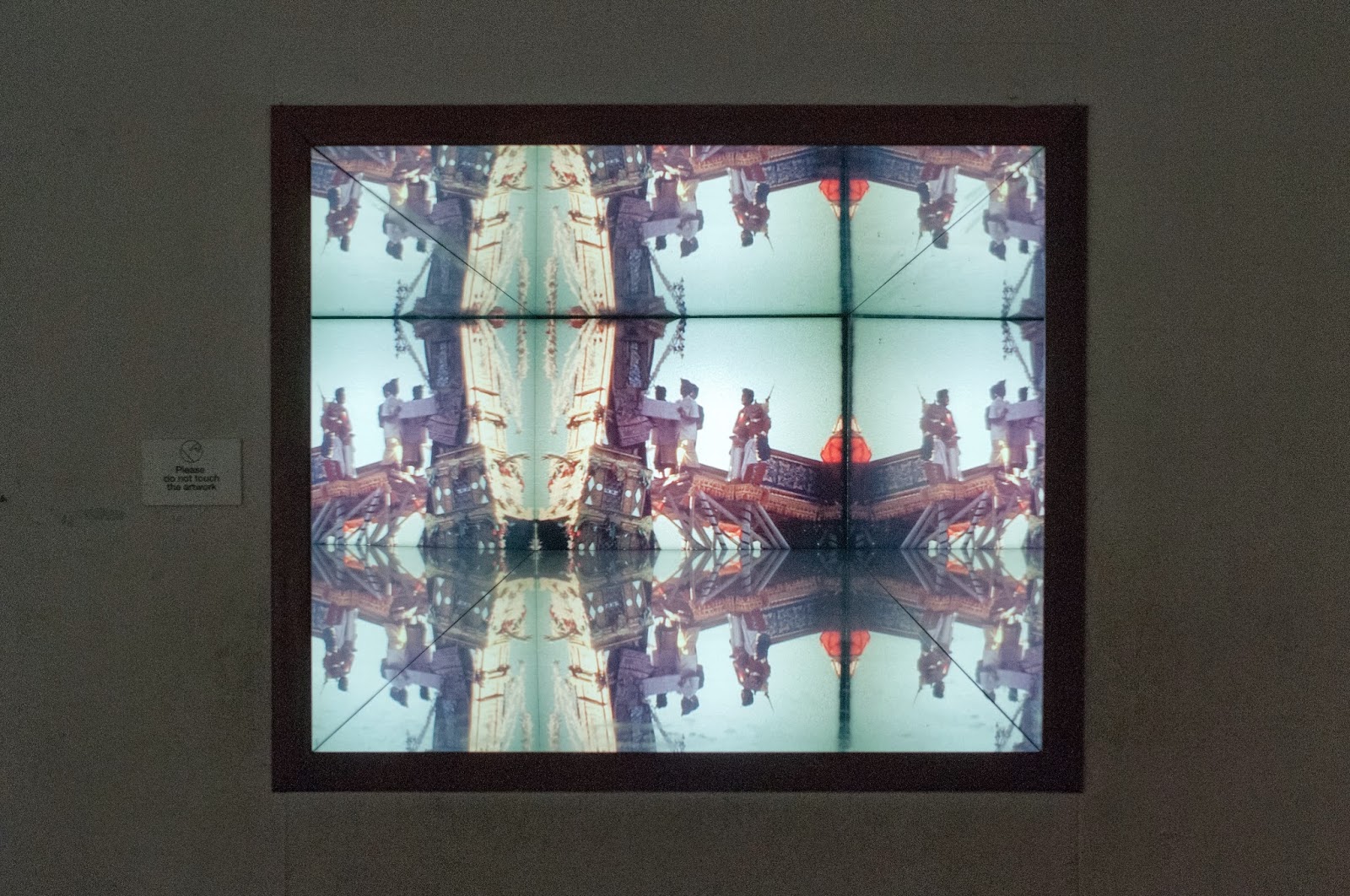 Down towards Mattancherry, the dusty road winds past spice and rice merchants, lorries loaded with heavy sacks parked outside where the exotic smell of ginger and cardamom mercifully disguises the stench of still water and fish guts drying in the sun. In a warehouse of endless Indian antiques, including a one hundred foot long wooden canoe, an exhibition entitled Cosmology and Cartography places early Indian attempts to understand the intangible universe alongside European efforts to map the tangible. 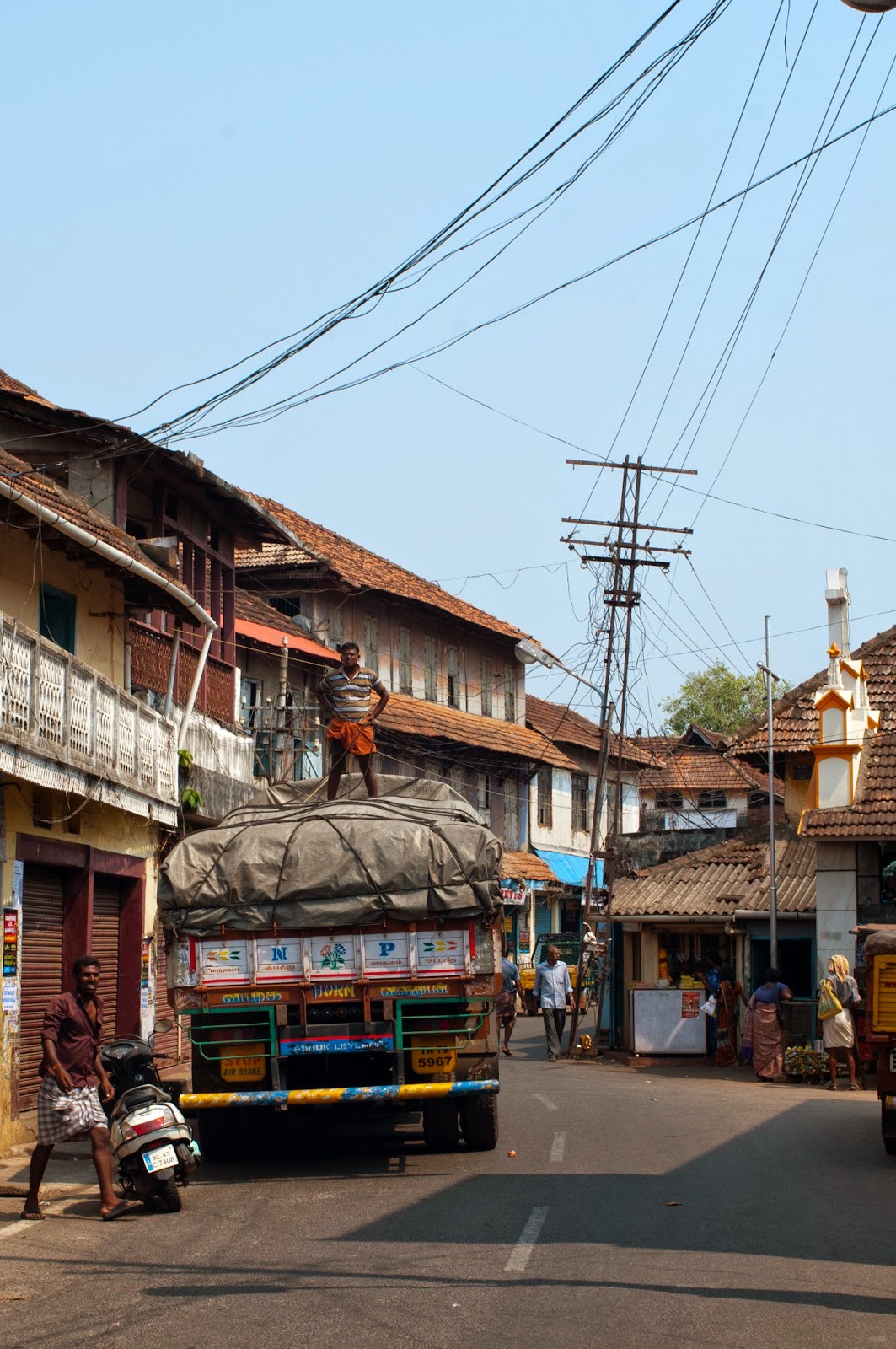 On the way home we ducked into Cabral Yard, an abandoned plot in Fort Kochi that has been transformed by the artist Valsan Koorma Kolleri into a dynamic sculptural space – a “tactile experiential landscape of our collective memory.” An area once occupied by human activity, then reclaimed by nature as it fell into disuse, has been rearranged, harnessing the shapes, energy and momentum of the natural resources strewn about it. The result is a playground of nature, with strange pagan shapes and structures hanging from trees or blocking pathways. It is mesmerising and fascinating to wander through. 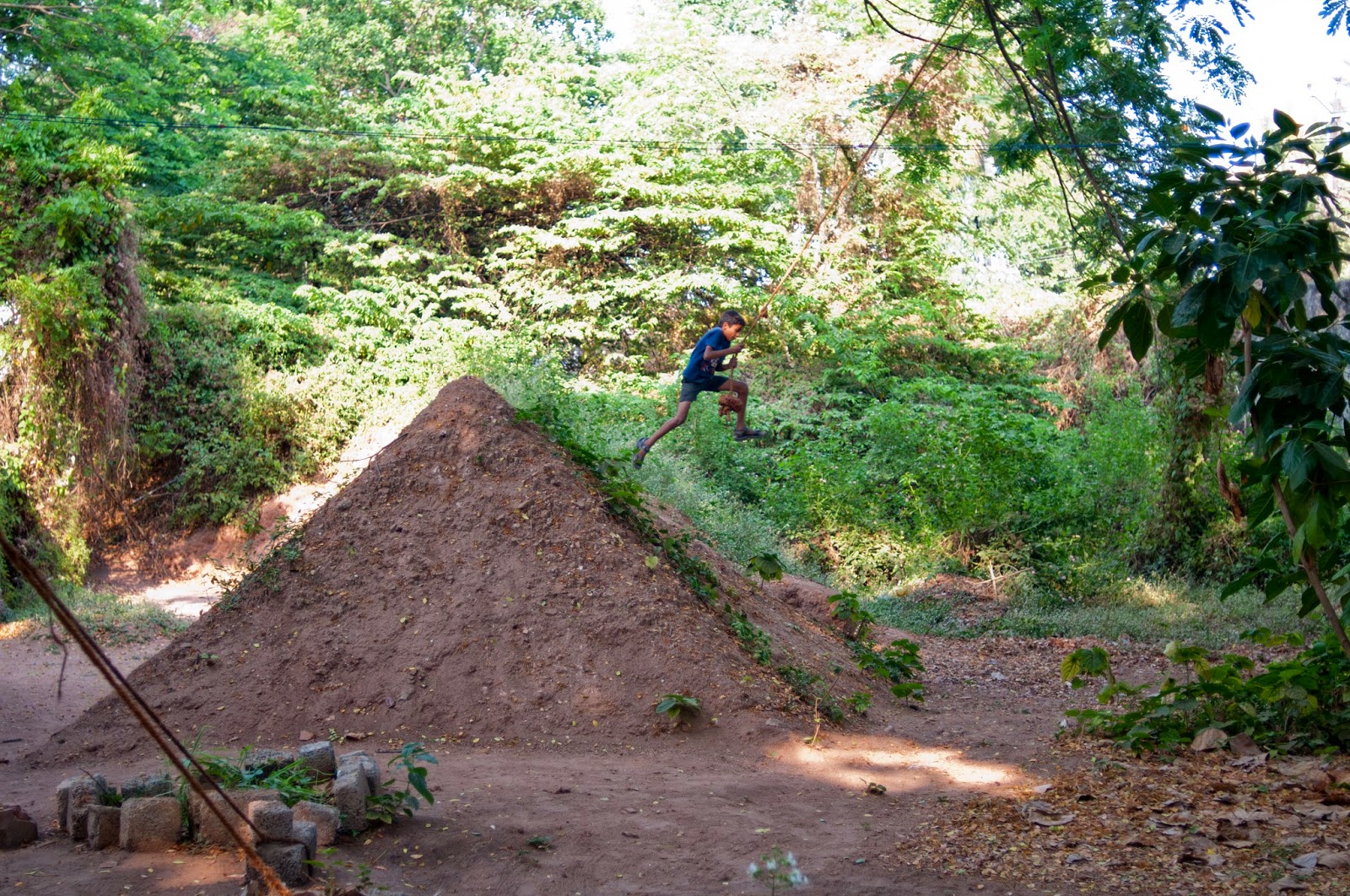 It wasn’t much later that I realised it was actually impossible to tell where the art ended and India began. Any number of the things scattered about town could have passed for installations - abandoned rickshaws or cars preserved in birdshit, piles of bricks, misplaced rubbish bins -  none of them less aesthetically interesting or thought provoking than the sculptures and creations pondered over by artists. And what does conscious street art add to the narrative of life here, when all about you are the hilarious signs and daubings of a society in constant flux? 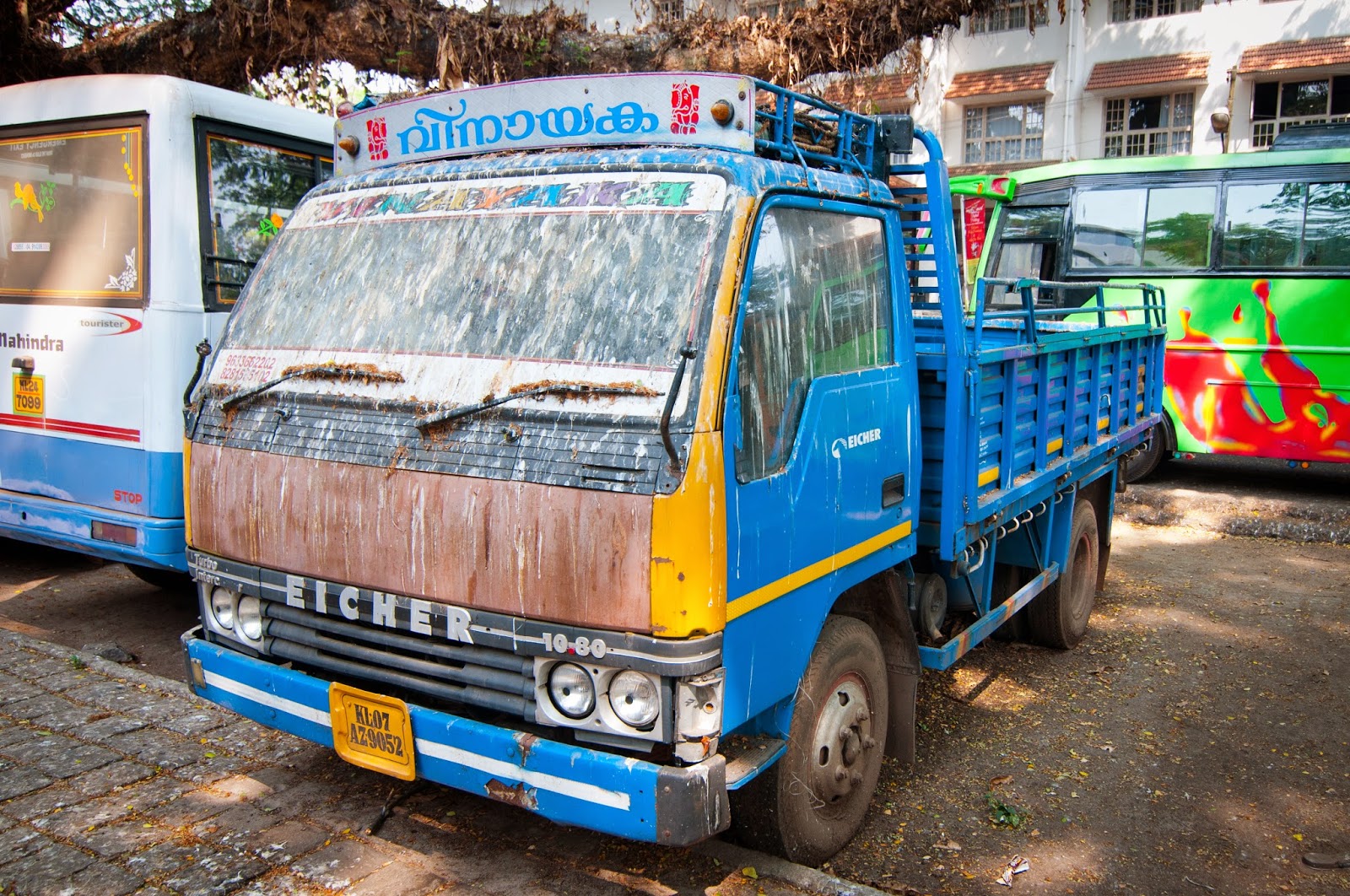 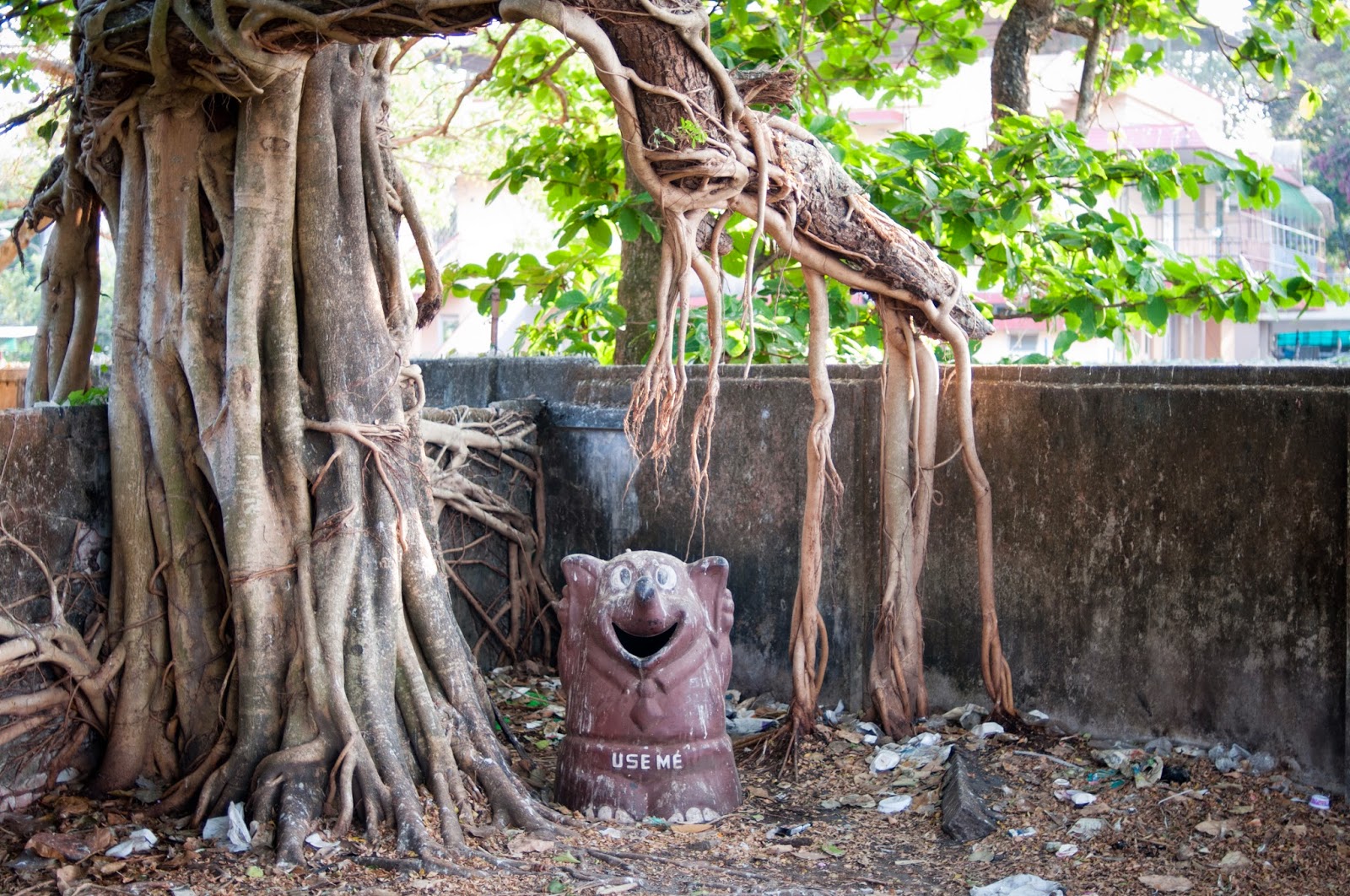 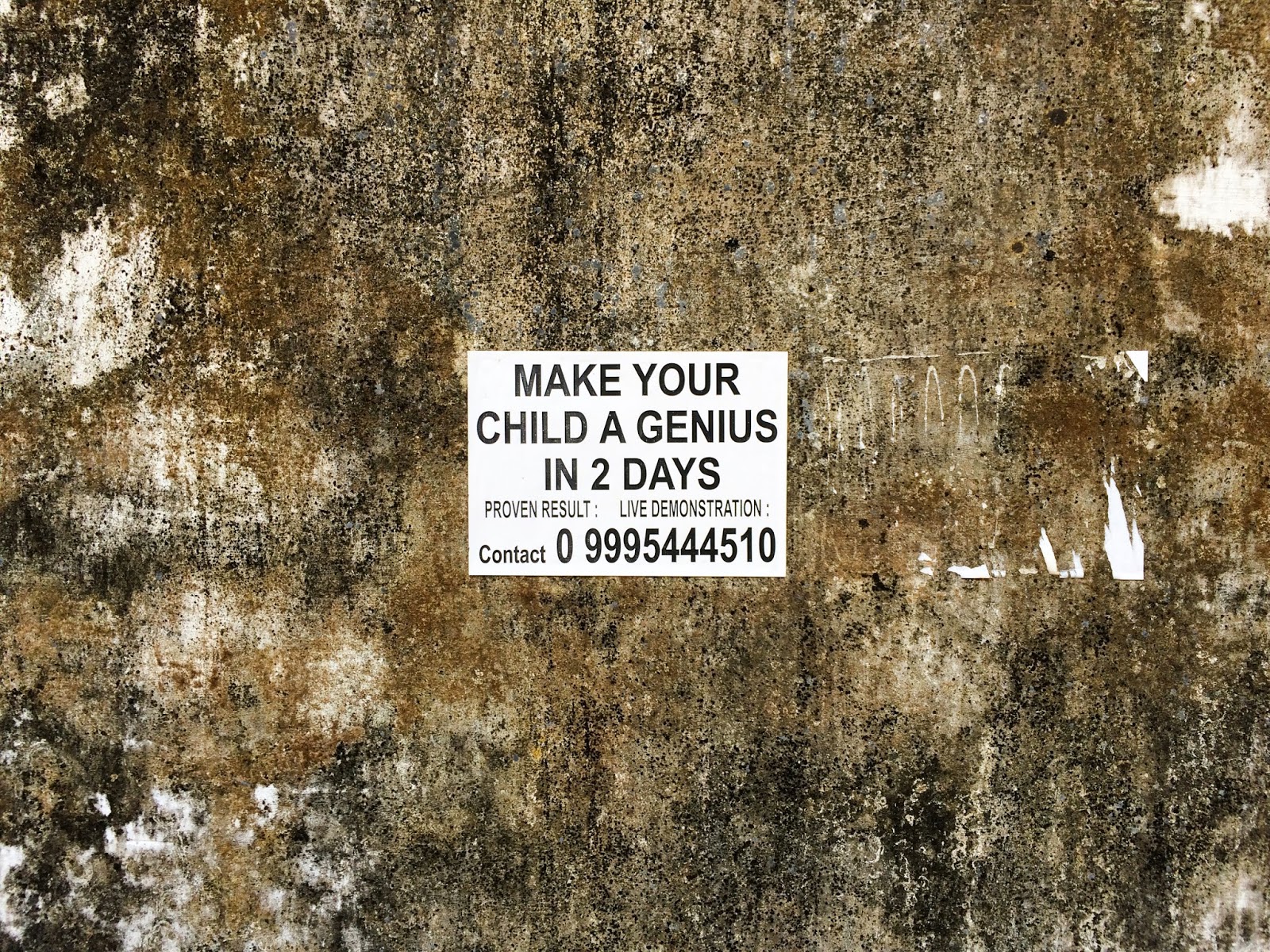 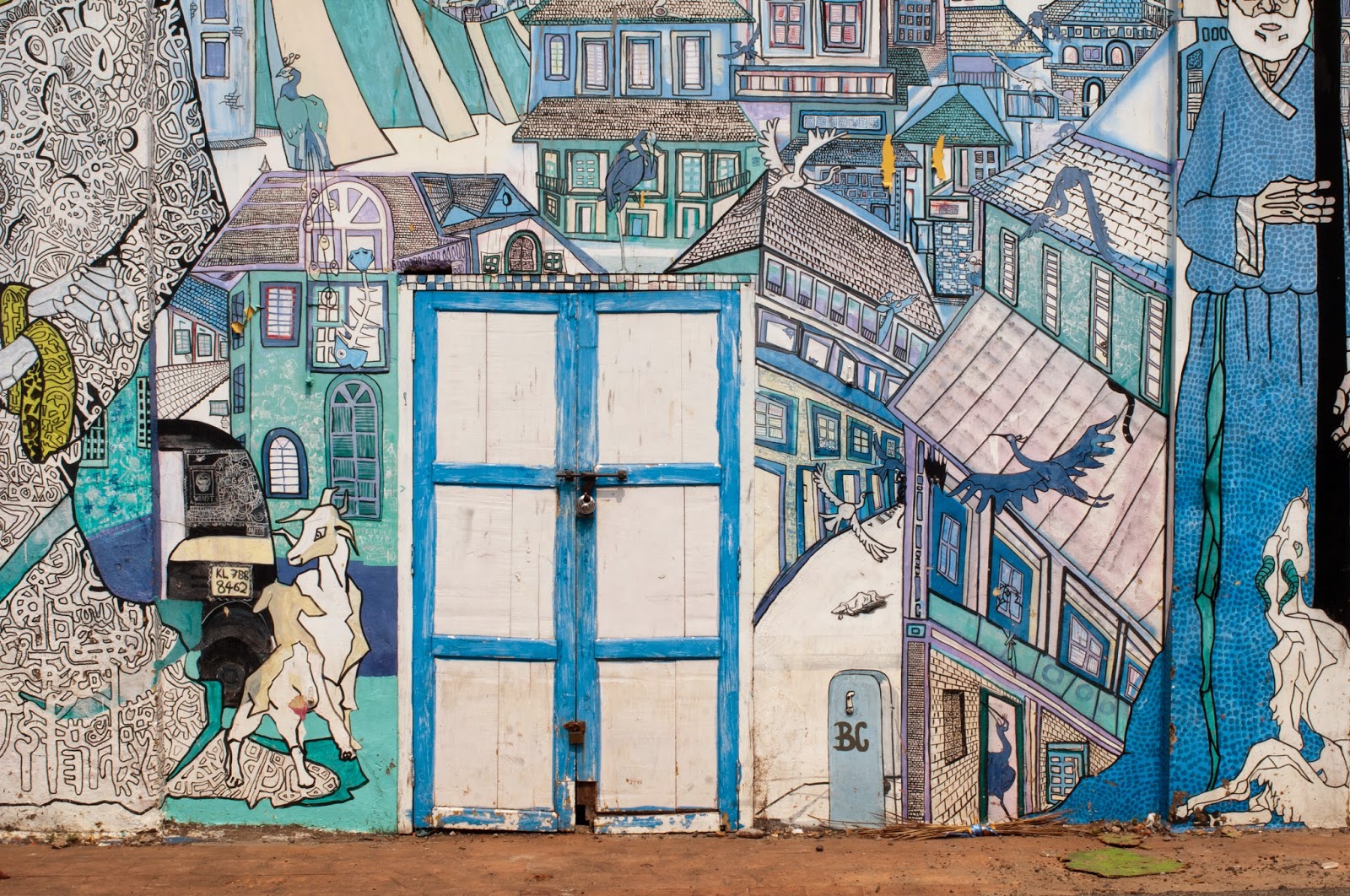 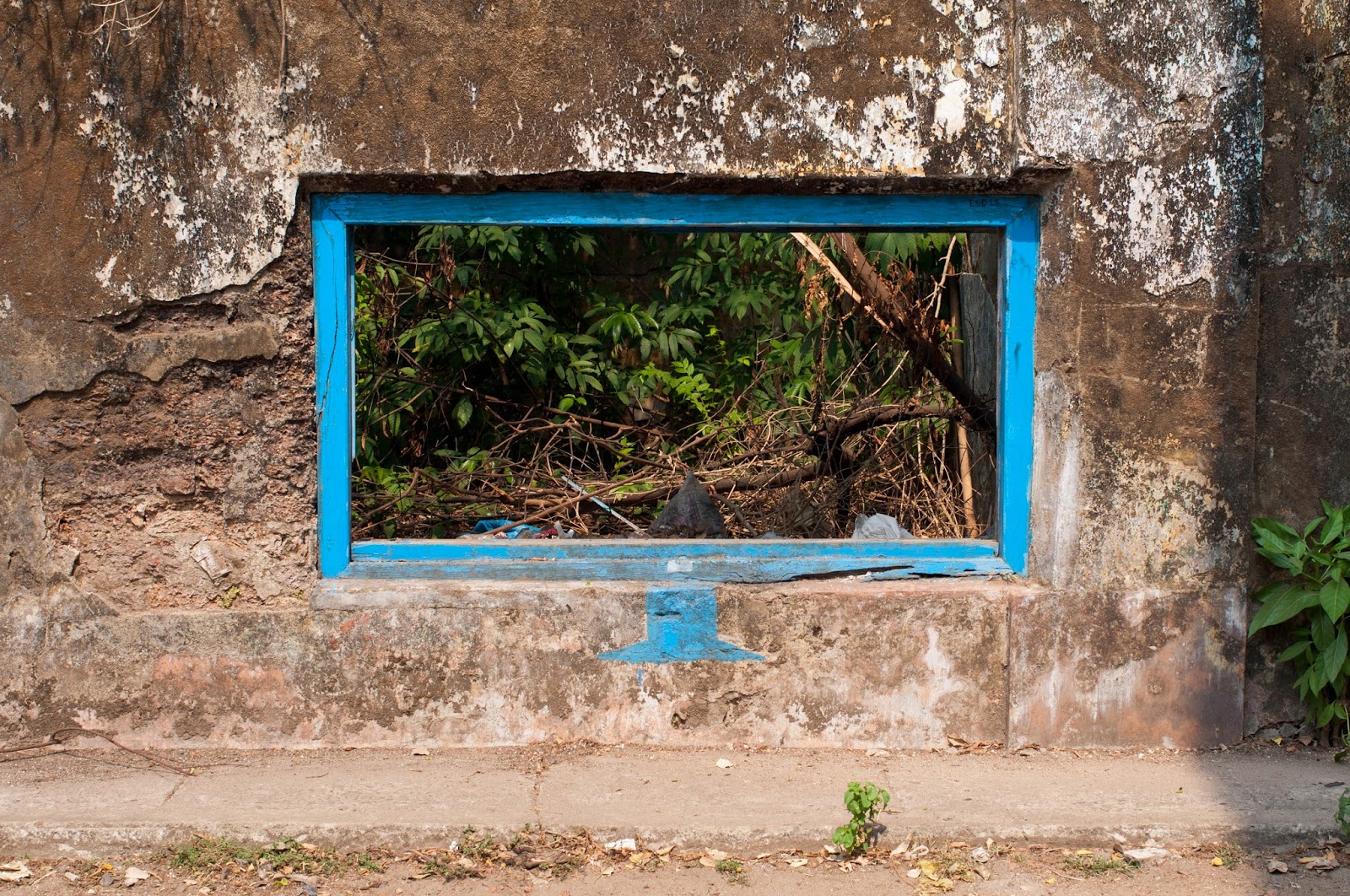 In Kolleri’s installation, he had reengineered the landscape to create an explorative, fictional space. Through the archway and back into the real world, the ramshackle, inadvertent way in which life unfolds here is actually the greatest work of art of all. There is an intrinsic comedy in all of this, borne out by the irrepressible, effervescent nature of the people as they sidestep their way through the debris; of their past, present and future.

The biennale is a brilliant, provocative, fascinating experience that encourages so much contemplation and innovation. But you don't have to wait every two years for that in India - you just have to open your eyes.