Want to know what strikes fear into the heart of every food lover, more than any other sight?

The buffet. Such a dirty word. Boof. Eh. Buff. It. Food cooked in large quantities and kept warm for hours. The opposite of everything that is joyous about food and eating. In Bhutan, it is the accepted means of feeding the tourist. Breakfast lunch and dinner.

This is a crying shame because the real Bhutanese food is great. I guess the tourists are of a certain demographic, and they probably don’t want their taste buds assaulted with chillies. But I do. I want them fucking blitzkrieged. And I want the food that does this to be freshly cooked.

I didn't have any real expectations when I arrived, so lunch on the first day was a pleasant surprise. I ordered the first item in the Bhutanese section of the menu: Beef Pa. What came was slow cooked shin of beef, served with dried red chillies and sliced radish. It tasted every bit as good as it looked.

Alongside chilli, the other thing they eat incessantly is cheese. I was expecting a sort of yak's feta, strong and tangy, but more often than not you are getting a strange liquid cheese, the like of which I have never really seen before. On its own it would be uninspiring, but needless to say, it is always accompanied by chillies. Ema Datse, the national dish, is cheese and chilli. Other versions include potato, spinach, mushroom perhaps, but there is always cheese and there is always chilli. Lots of chilli.

After one cold, bland and insipid buffet too many, I started to go off piste, and Ugyen would ring ahead and arrange a la carte options, or I would read up in the Lonely Planet and just piss off on my own. I can't bear going into these places, full of tour groups or couples much older than me, where the table is set for one and my guide and driver are siphoned off into a room out the back to eat real Bhutanese food (where I'd rather be).

I persuaded Ugyen to get one hotel to serve me the same food as him and Chencho, and was rewarded with some dried fish. Whilst I don't exactly hate this stuff, "like" would definitely be too strong a word. The other native dish they bring involves mushrooms and chillies (obviously), and I wolf it down. 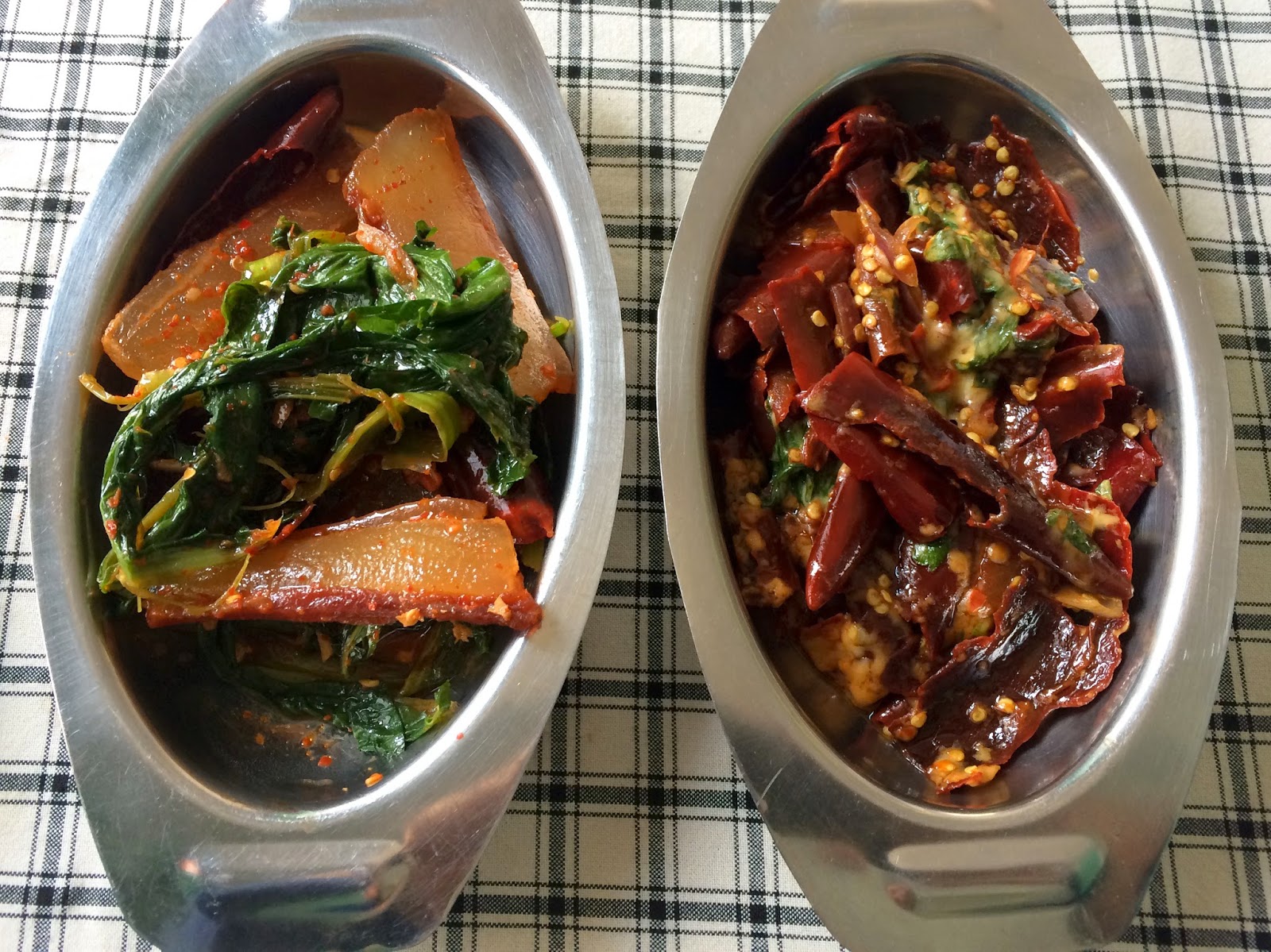 Probably the best dish I had was this Phaksha Pa, or cured pork pa, on the left. You might be able to make out a very thin strip of meat attached to the fat. This wasn't there when I came back the next day, and it didn't need to be, because the fat itself is the star, and it is so fucking tasty I could die eating it and not notice. Sweet, salty, smoky and soft, delicate, yet firm enough to bite. It melted in the mouth. That's their ema datse on the right of course. I promise you there's cheese in there somewhere.

Sooner or later though, I need a break from incinerating my mouth and insides at every meal then drinking sweet black tea to calm the inferno. So in Thimpu I went to a western joint and indulged in a fantastically delicious yak burger, washed down with a surprisingly crisp wiessbier. Like all good beers, it benefits from the purity of its main ingredient: water. I could definitely handle a night on the Red Pandas. 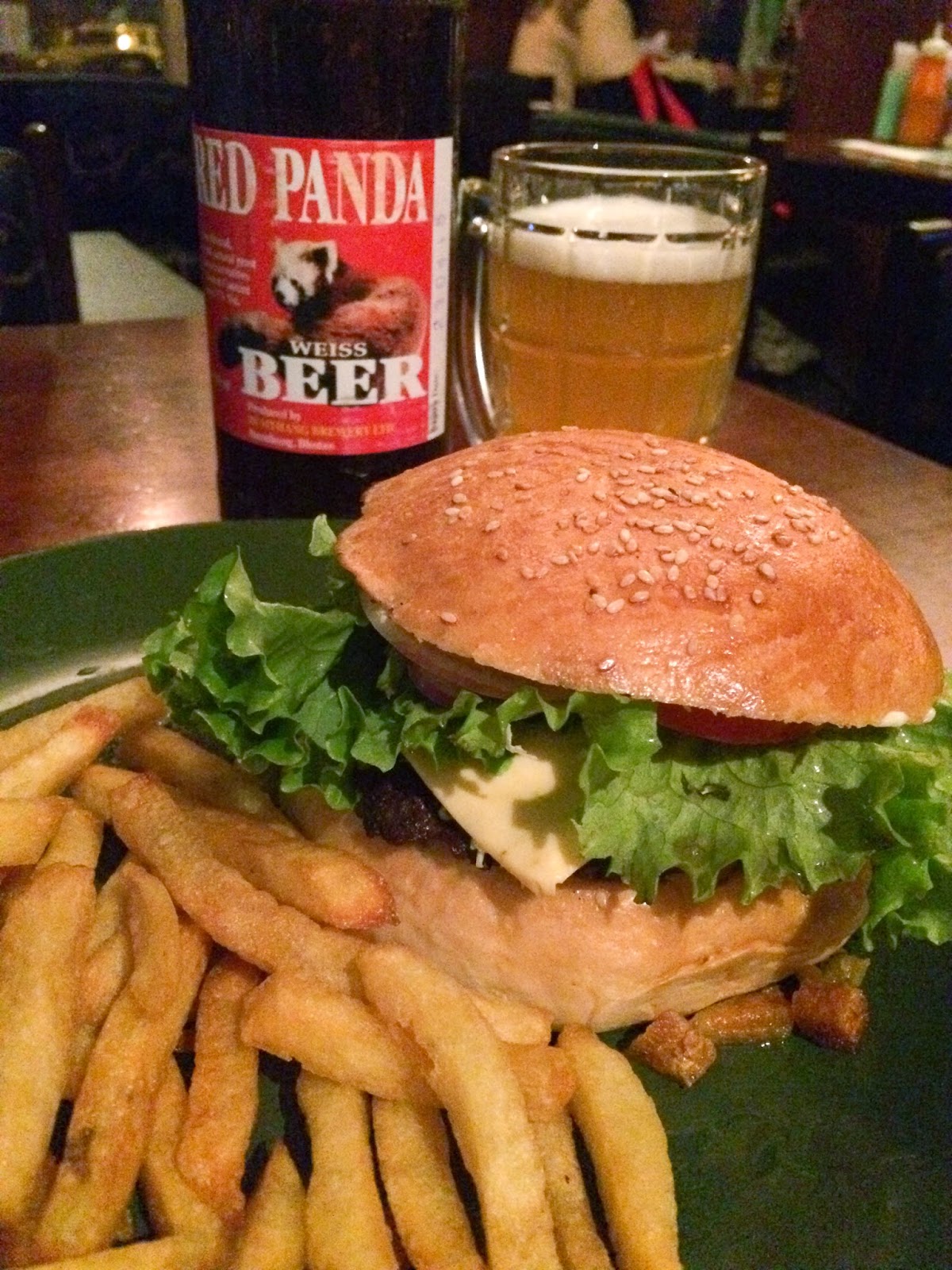 On my last day, I nearly acquiesced and had lunch at another buffet, but on the approach I ditched the politeness and excused myself. Instead I crossed the street to the place I had eaten in the night before, where I devoured some tremendous fried pork momos and felt gluttonous but happy.

There's some truly great food in Bhutan, but most visitors won't even get close to it. They'll be too busy eating Olive Spaghetti or some manky stir fried chicken to even know about the wilted fernheads the boys in the kitchen are tucking into with their bare hands. Ignorance might be bliss, but they can keep it.

Give me pure unadulterated pork fat, dried yak meat, and chillies in cheese over that shit any day of the week.
Posted by Joe at 19:36