Heart of Darkness / Death in Varanasi

*
I felt drawn to India to confront the things that make me uncomfortable or afraid. And the two things I am afraid of most, I think, are shit and death. So I made a trip to Varanasi the embodiment of my quest - its dark, mysterious, impenetrable heart.

I had read that Varanasi was a festering shithole, drowning in its own squalor, where I would be hassled, polluted and poisoned out of mind and body. A bastion of savagery where people bathe in the fetid river as half cremated corpses float by, where fervent insanity and archaic religious conviction has triumphed over reason.

Everything you might hate about India is magnified here. Magnified to the power of, well, India. Varanasi is India squared. 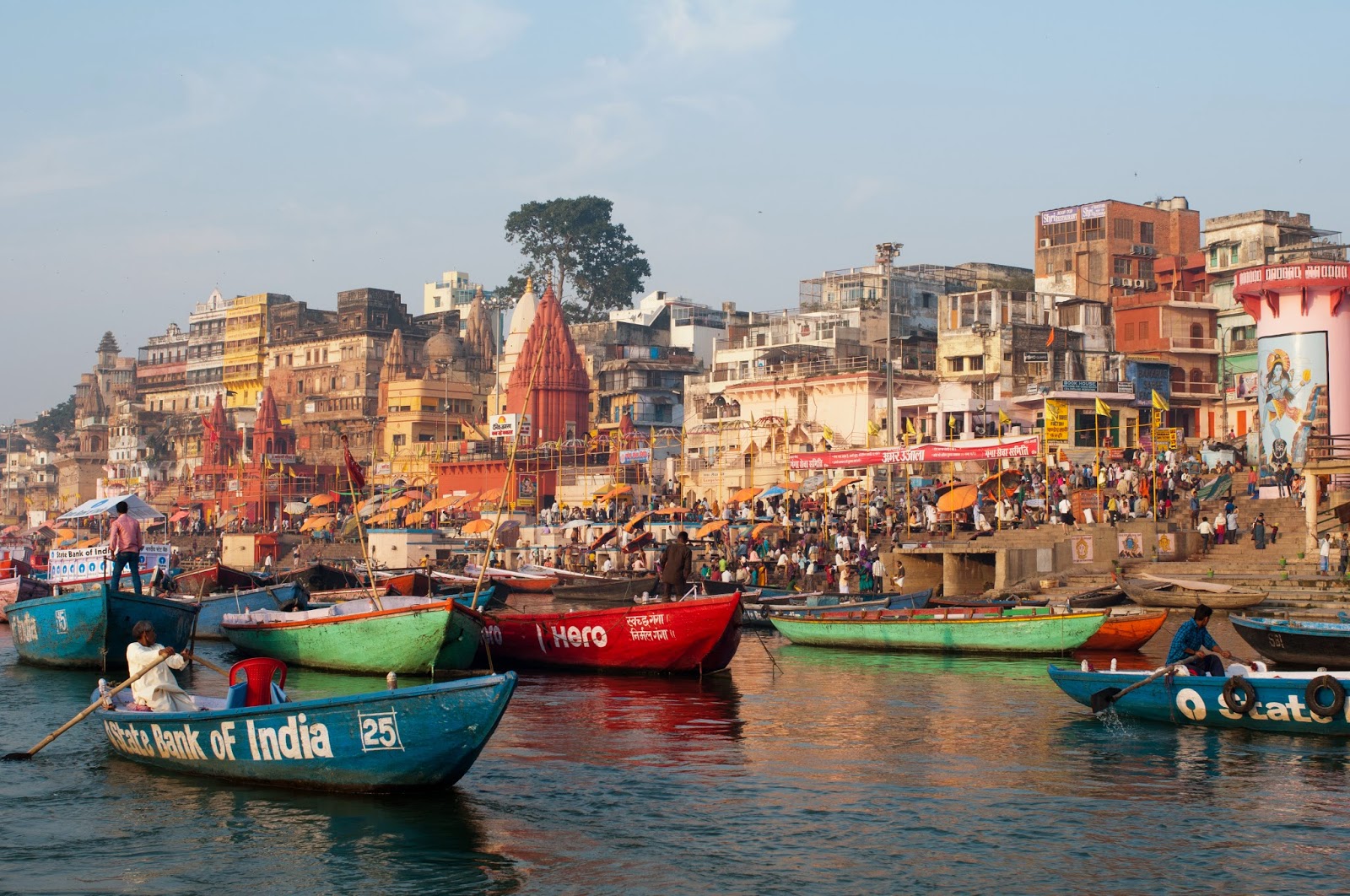 And I love it.

Because despite being the filthiest place I have ever been, and riddled with absurd paradoxes, it is captivating, enchanting and irresistible. It surprised me not with how squalid it is, which I had expected, but how colourful and joyful. I imagined it to feel oppressively dark and sober but instead it is a lesson in how to absorb unmentionable things into the fabric of existence. 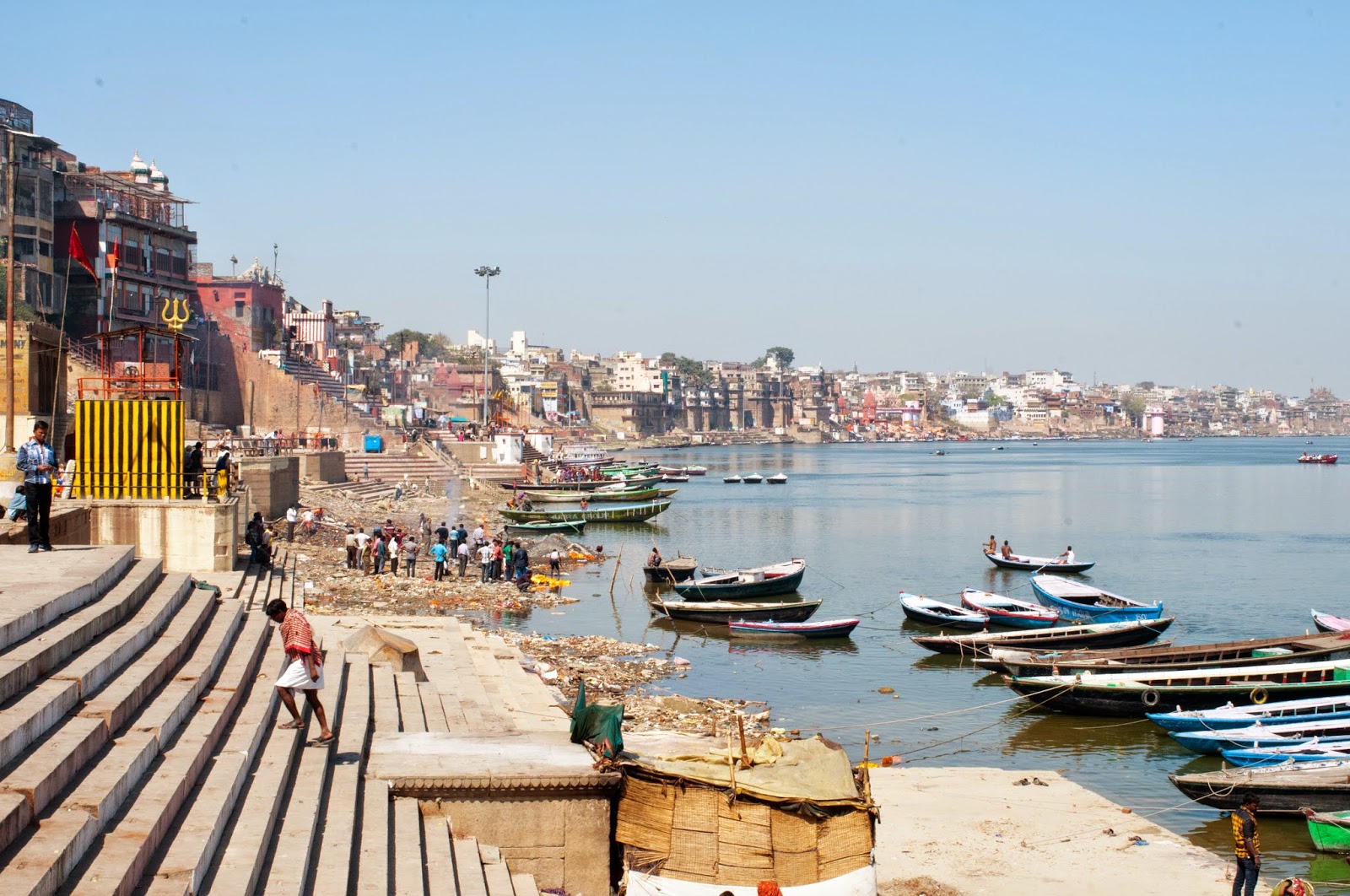 Varanasi, the spiritual heart of the Hindu universe, has stood on this crescent shaped stretch of the mighty Ganges for anything up to 5,000 years, among the oldest cities on Earth. For Hindus, the Ganges is the embodiment of all sacred waters, and is spiritually purifying (irrespective of its physical condition, which appears to be the complete opposite). Bathing in it, or having one's ashes scattered in it, cleanses the soul. 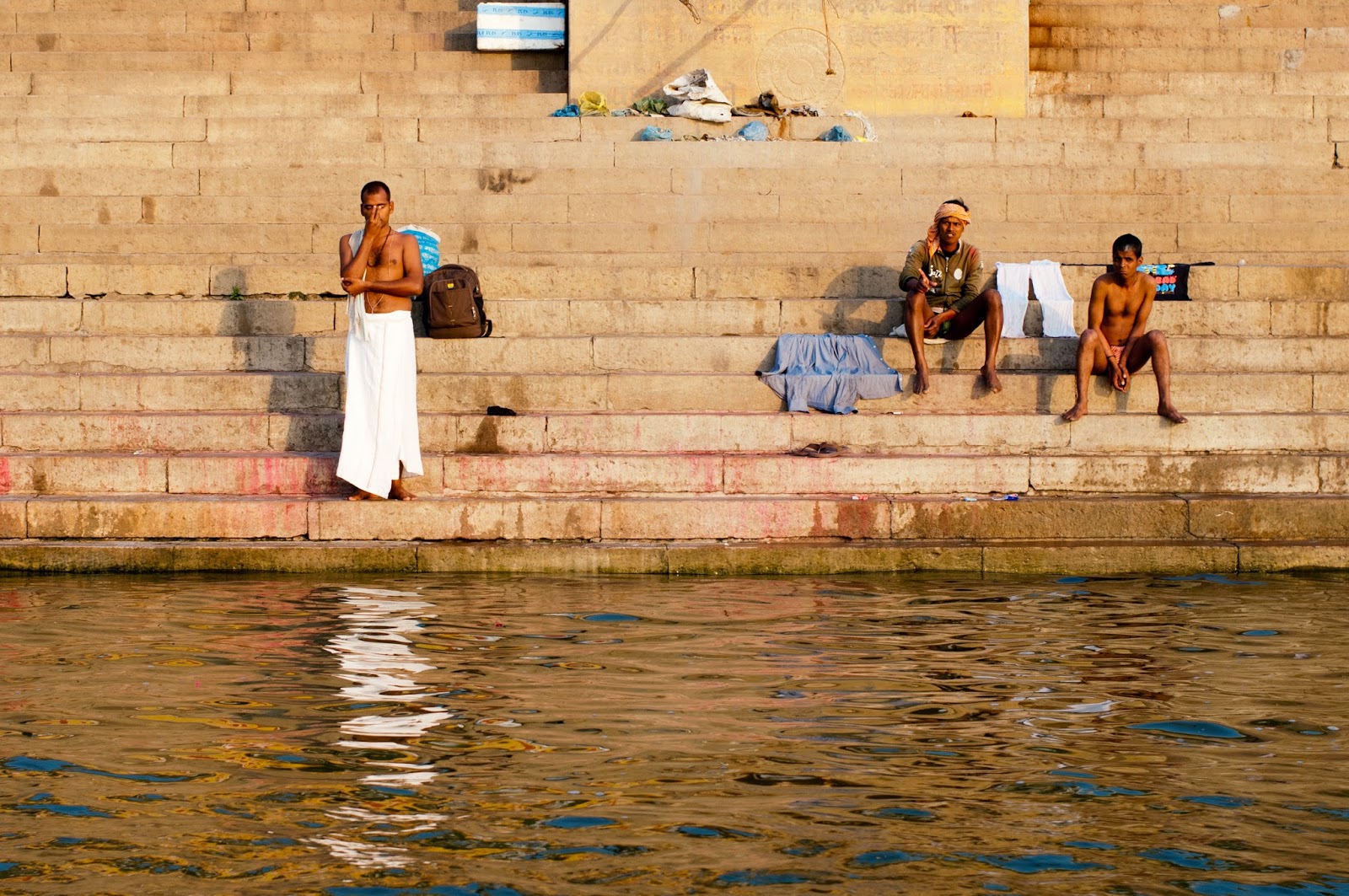 The Ganges is wide and sweeping here, and on the opposite bank to the city is a great expanse of sand before you reach the tree line and the villages behind. On the western side, the ghats, rows of steps, lead down to the water from the town itself. They run for five kilometres, the edge of the city, its focus and its soul. They are lined with magnificent, if decrepit, palaces that, in my architectural ignorance, I shall describe as Venetian. The contrast in the two banks of the river creates the illusion of a shorefront, and reinforces the spiritual sense that Varanasi marks the boundary of something; a cusp or outer limit. 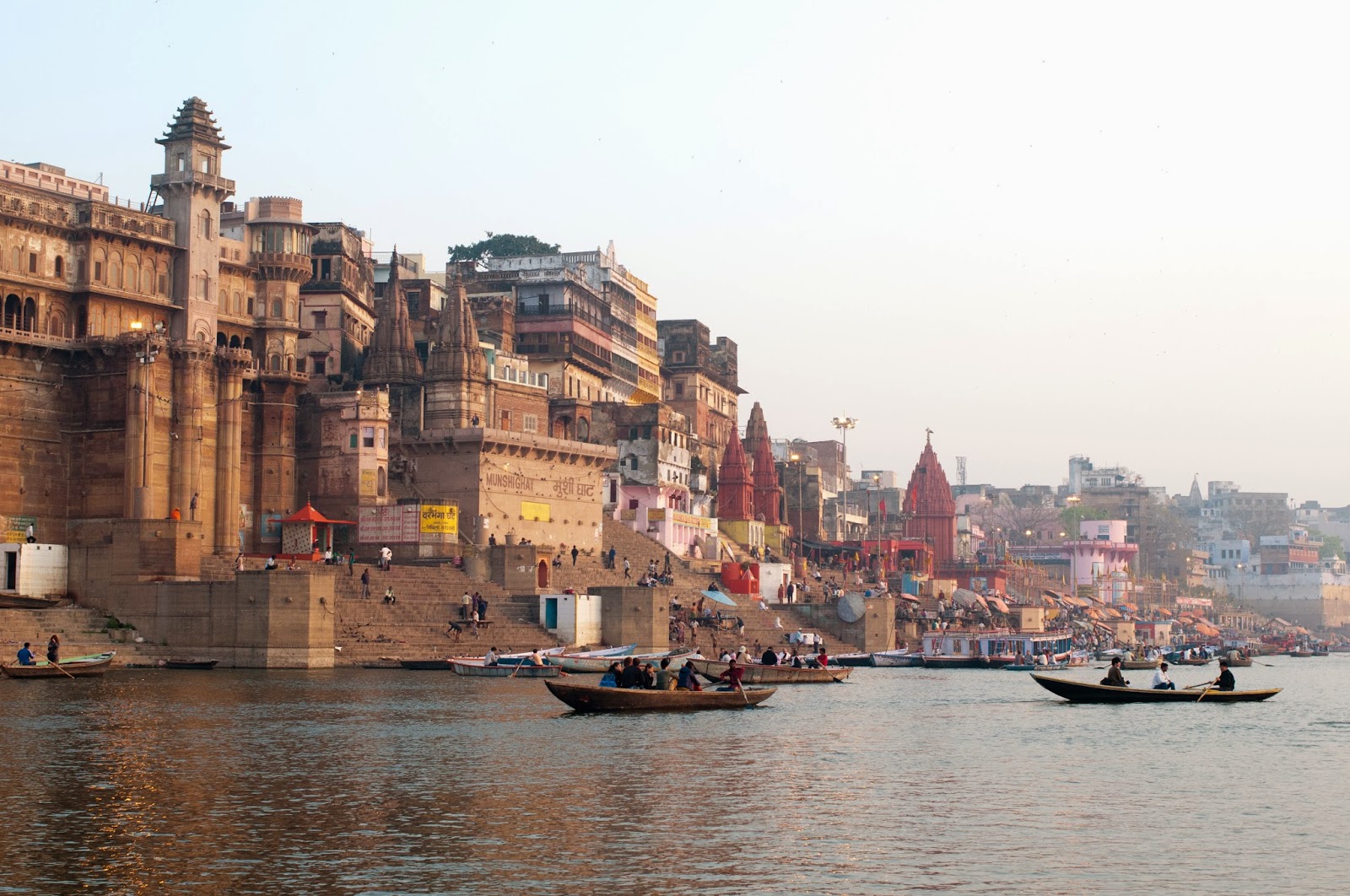 Take a boat ride, or walk along the ghats at sunrise and every facet of human life is played out effortlessly before you, with unwavering reverence and persistent joy. The water may be brimming with refuse, dead bodies and effluent, but these things are invisible if you believe it to be pure and holy. And so they are bathing and washing themselves at the water’s edge, perfoming puja, worshipping the river and throwing up their arms to the rising sun. They are urinating, defecating perhaps. Washing clothes and the corpses of dead relatives as cows cool down and lap the water in between them. 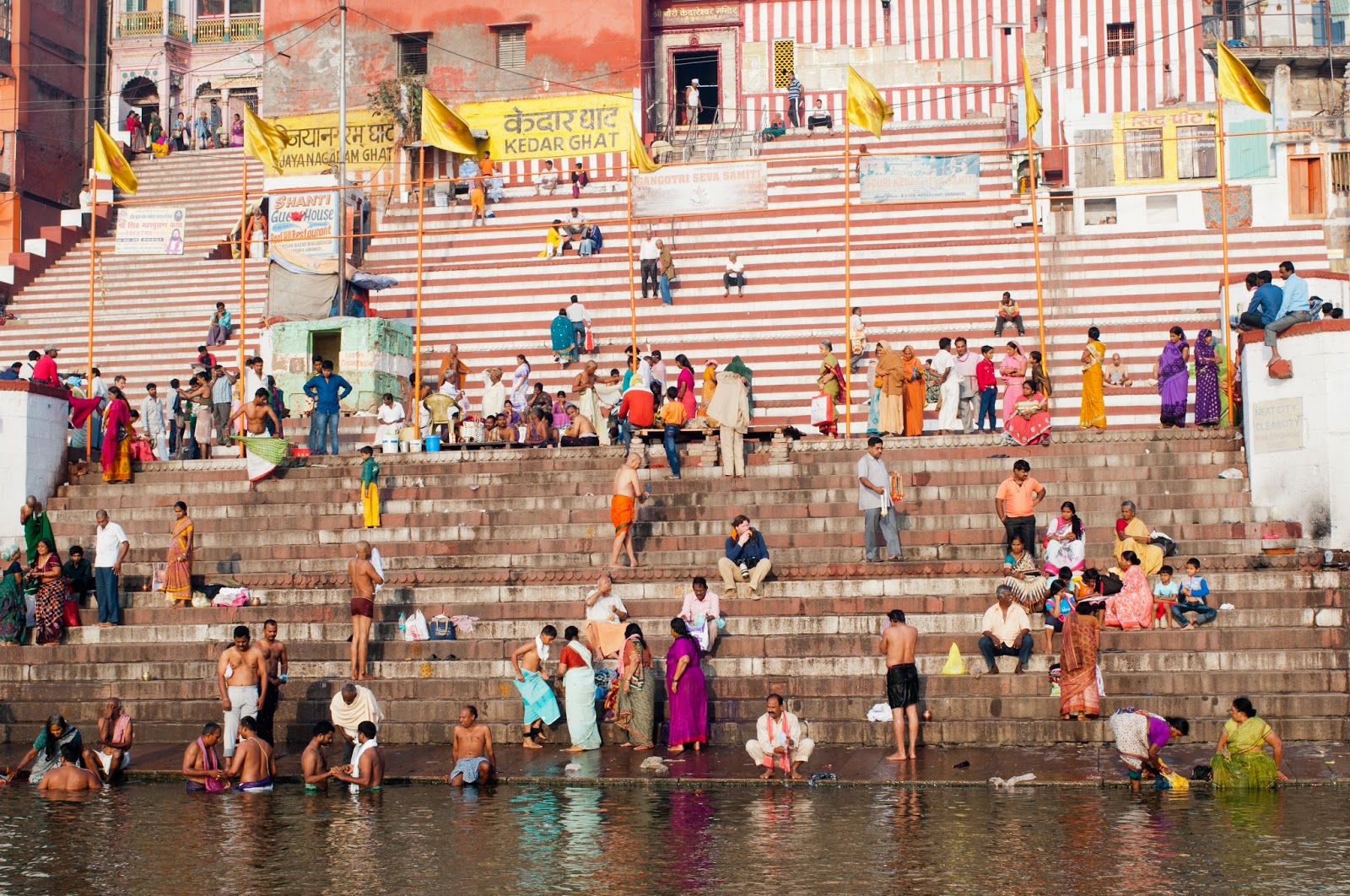 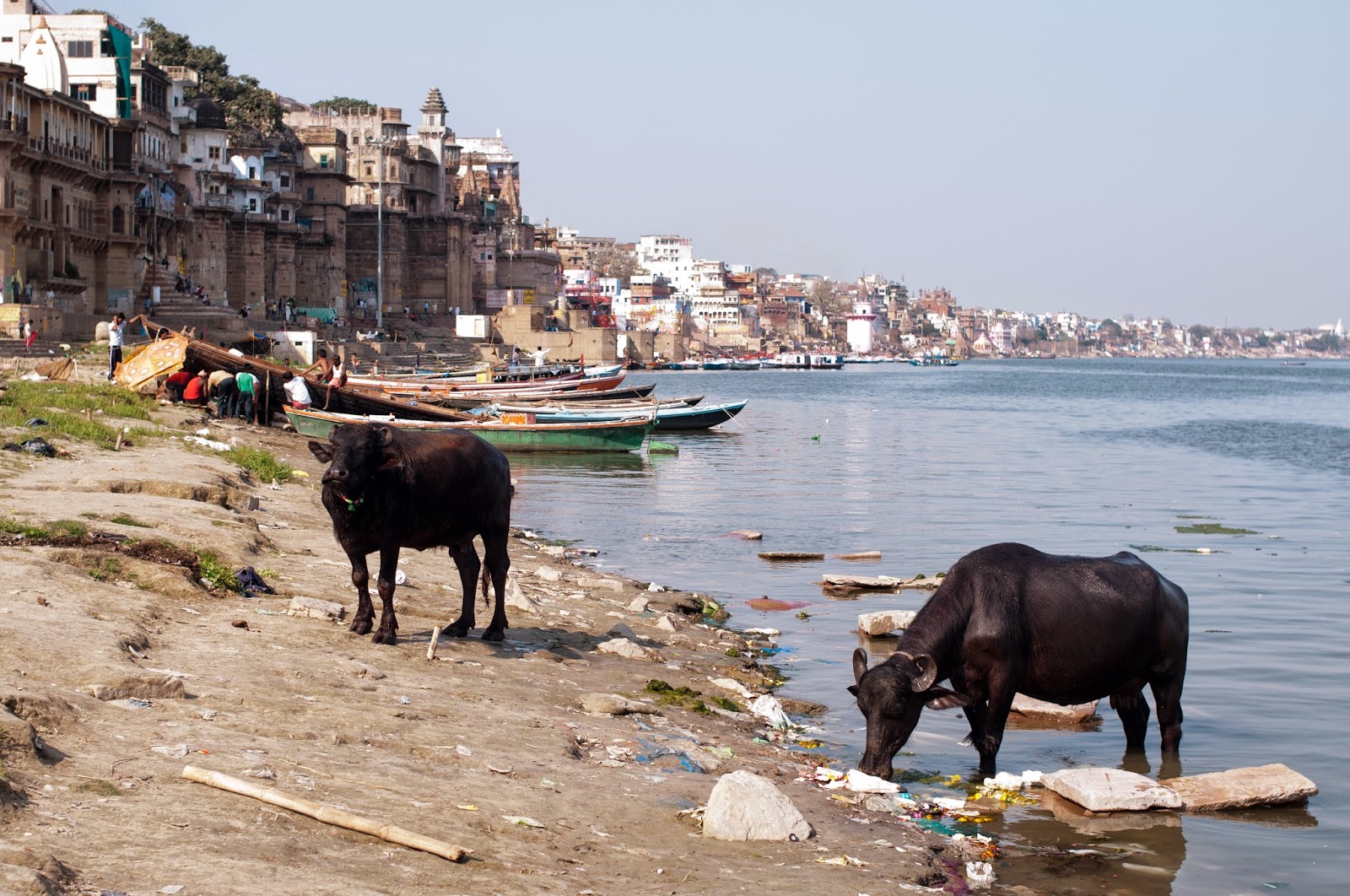 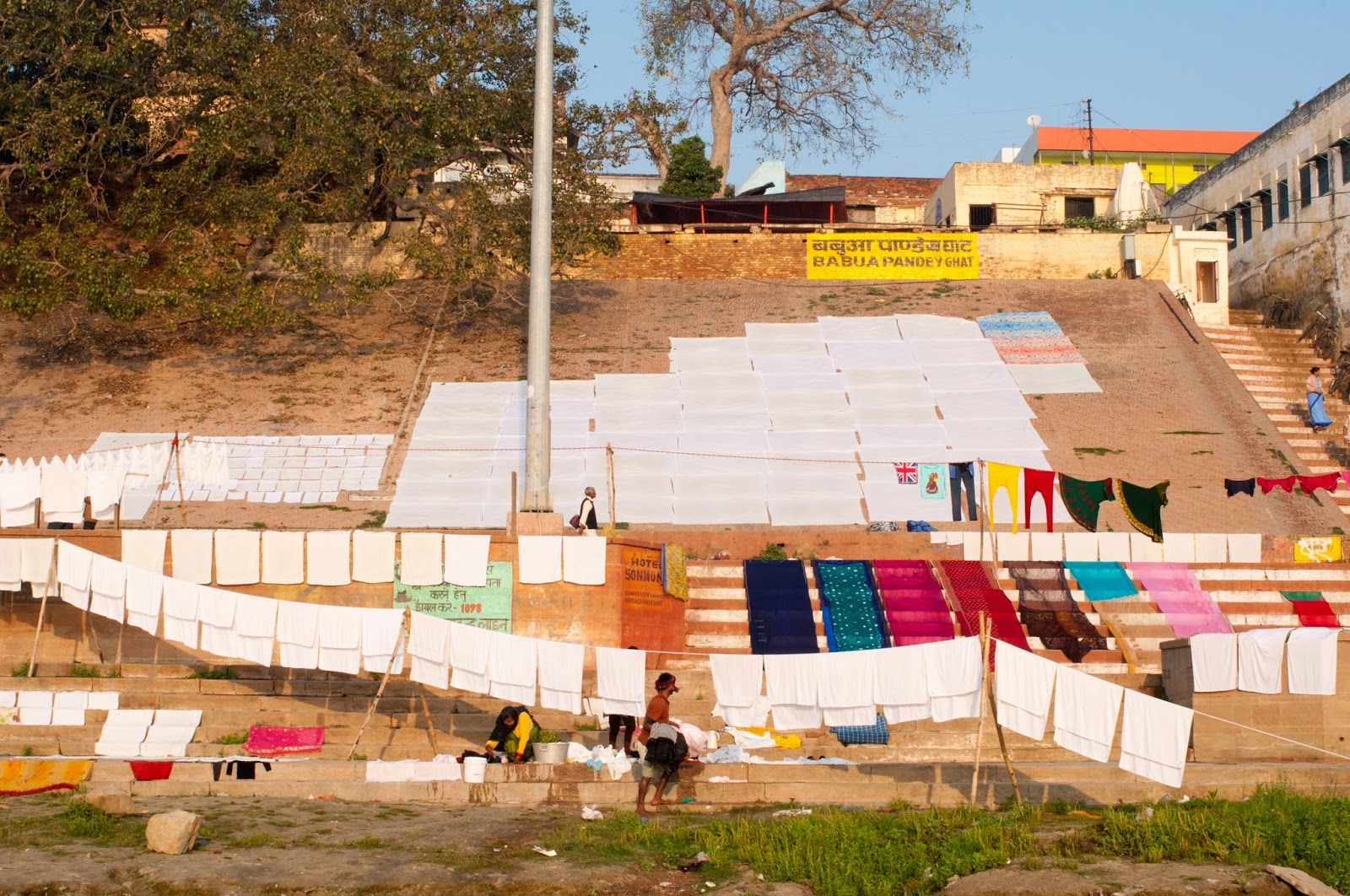 Immediately behind the ghats extends a medieval labyrinth of passages so tight, winding and congested that navigating your way among them is impossible. Through their tapered walkways comes a never-ending carnival; a procession of cows, dogs, sheep, goats, bicycles, carts, motorbikes, tourists, backpackers, hippies, Indians and Sadhus (holy men in saffron robes with elaborate facial hair and wrinkled faces), all going about their daily business. The litter strewn streets are stained with coloured dye (from Holi) and puddles of assorted excrement. The Lonely Planet warns of the “Varanasi Shakedown” but the biggest danger is posed by a swishing cow’s tail, sodden with fresh diarrhea, as you try not to get run over by a motorbike or step on someone’s dreadlocks.

Up on the little terrace at my guesthouse or walking along the ghats, I could spend hours, days, weeks, just watching the peculiar rituals of daily life casually unfold around me. Men huddle around a chessboard, a dog sleeps on the stained ground. In front of them an endless game of cricket is played using scraps of wood for bats. A wedding is going on somewhere, the drumming rising up out of the alleyways. On the rooftops either side of mine, children are locked in concentration, their arms and bodies quick and strong as they fly their fighting kites out over the river. Monkeys patrol the parapets, scavenging for food and water, stopping only to groom or copulate. 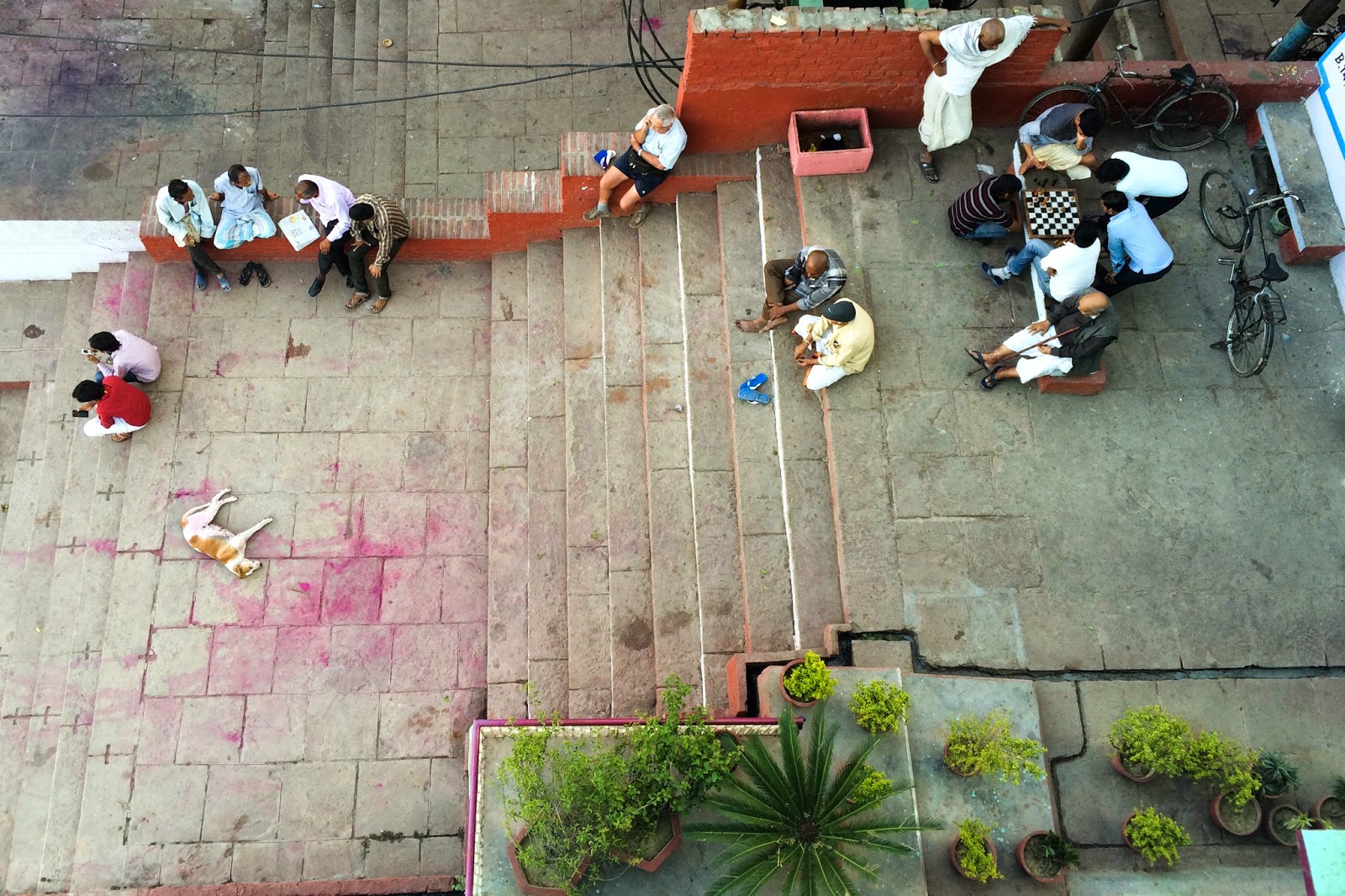 The touts are no more persistent or irritating than anywhere else in the world. The shit is an inconvenience, but you watch out for it. The town is hectic to say the least, and the passageways an impenetrable maze of unpassable traffic, but so what? The people are wonderful, always offering a smile, a hello or a namaste. A few of the main ghats get a bit crowded, but elsewhere they are peaceful and quite beautiful. Even the river looks clean (cleaner than the Thames) from a distance, though it doesn't survive much closer scrutiny than that. 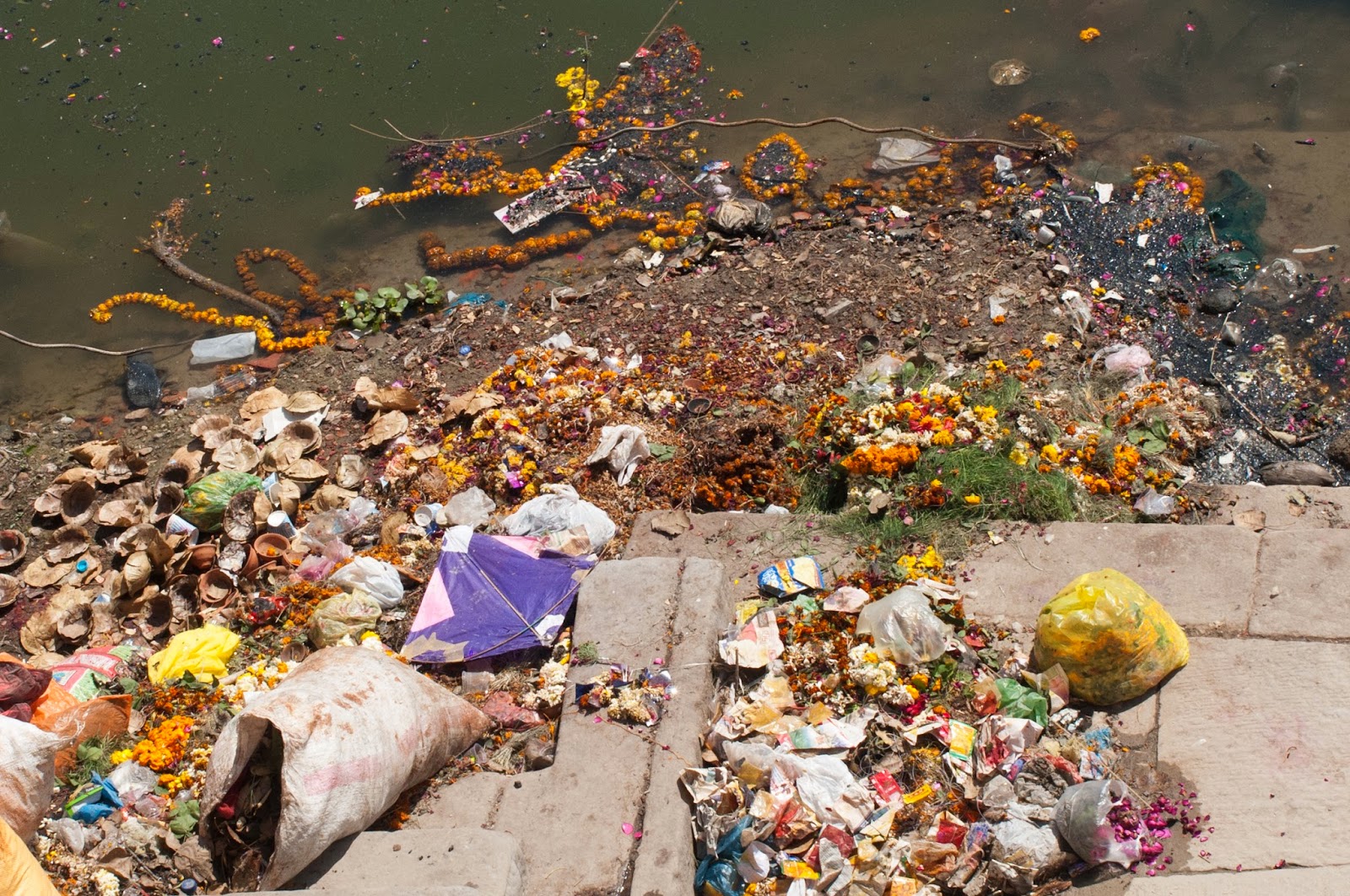 If Varanasi were my heart of darkness, a place of savagery and insanity that I felt drawn dangerously towards, then being here has turned the pilgrimage on its head. It has taught me, quite genuinely and emphatically, as someone once said, that the only thing one really has to fear, is fear itself.
I have never felt that far away from Death in India. From the Tower of Silence in Mumbai to the dead dog in Goa; the shrouded crashed car in Hampi, the crumpled petrol tanker outside Chennai. This didn’t trouble me though and I was never looking over my shoulder, because I already knew where I’d find Death.

I knew Death would be in Varanasi, because people come here from all over India to die. Hindus believe that if you are cremated here on the banks of the Ganges you achieve Moksha - the cycle of reincarnation is broken and your soul ascends to heaven.

On my way to Varanasi, it occurred to me that the people I would watch being cremated tomorrow, were still alive. I didn’t know them in life, but in death they would have meaning for me. I would watch them on their final journey, carried through the streets on bamboo stretchers towards the ghats to be washed in the holy river one last time. I would be a voyeur, a spectator, while the wood was weighed on sinister looking scales and stacked carefully in place. I would turn my head from the smoke as the family peeled away the cheap wrapping from the shrouded body and lifted it carefully on to the pyre. 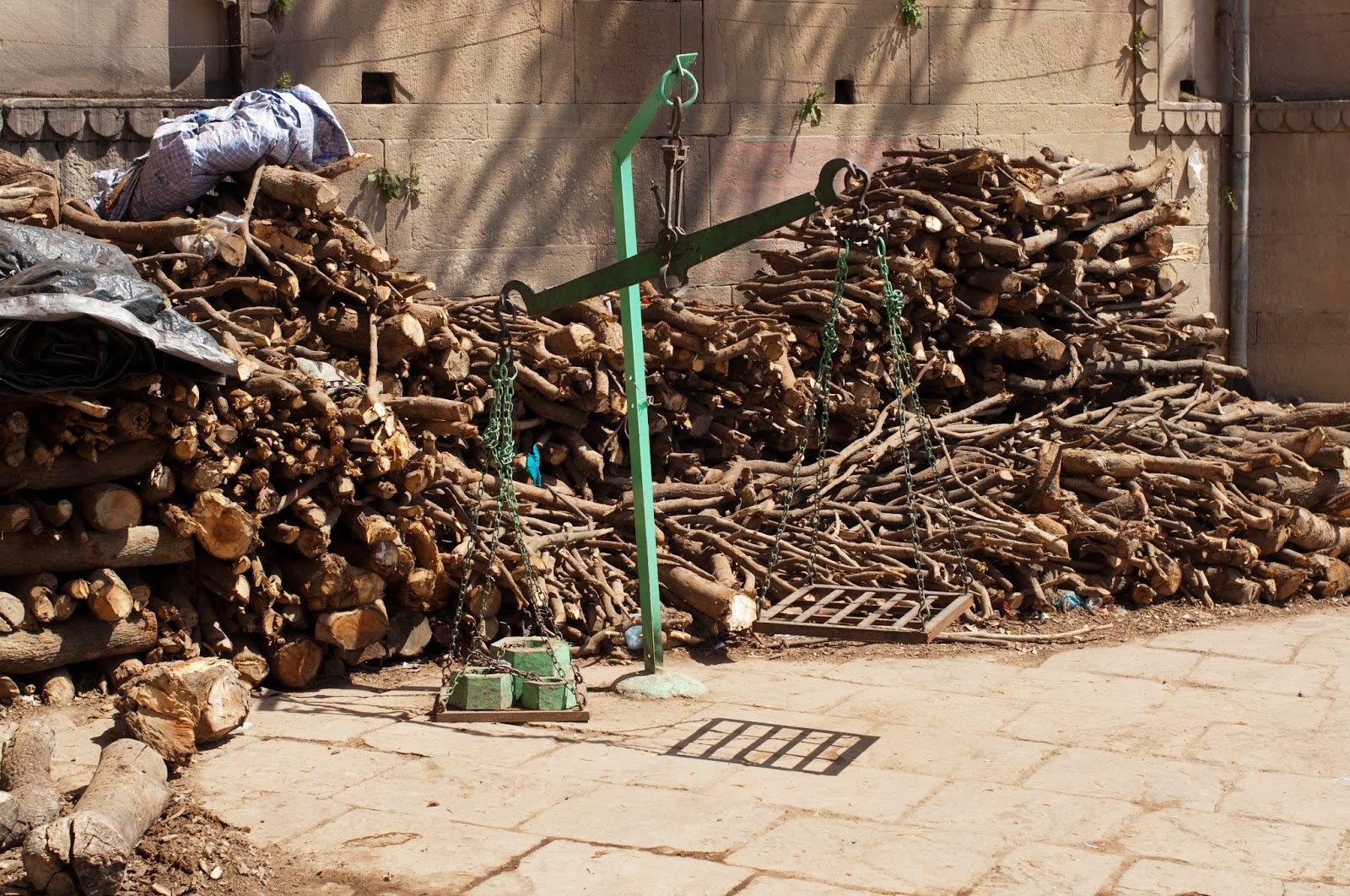 I had imagined how this would pan out. It would be sunset, my mind and soul steeled for their first glimpse of a human corpse. But this is Varanasi, and nothing ever happens quite as you expect. So it was walking along a busy thoroughfare, dodging cows, cycle rickshaws and cars, that I saw my first body, the male relatives striding purposefully, chanting Rama Nama Satya Hai (The Name of Rama is Truth). No tears in their eyes, just a look of steely resoluteness and purpose.

I then got hopelessly lost in the alleyways north of town, and was relieved to eventually find myself back on the river. Disorientated, the acrid smell of smoke hit me at the same time I glimpsed the wood stacks. Manikarnika Ghat - the burning ghat. As eerie, sinister and macabre sounding, looking place, as you are likely to find. 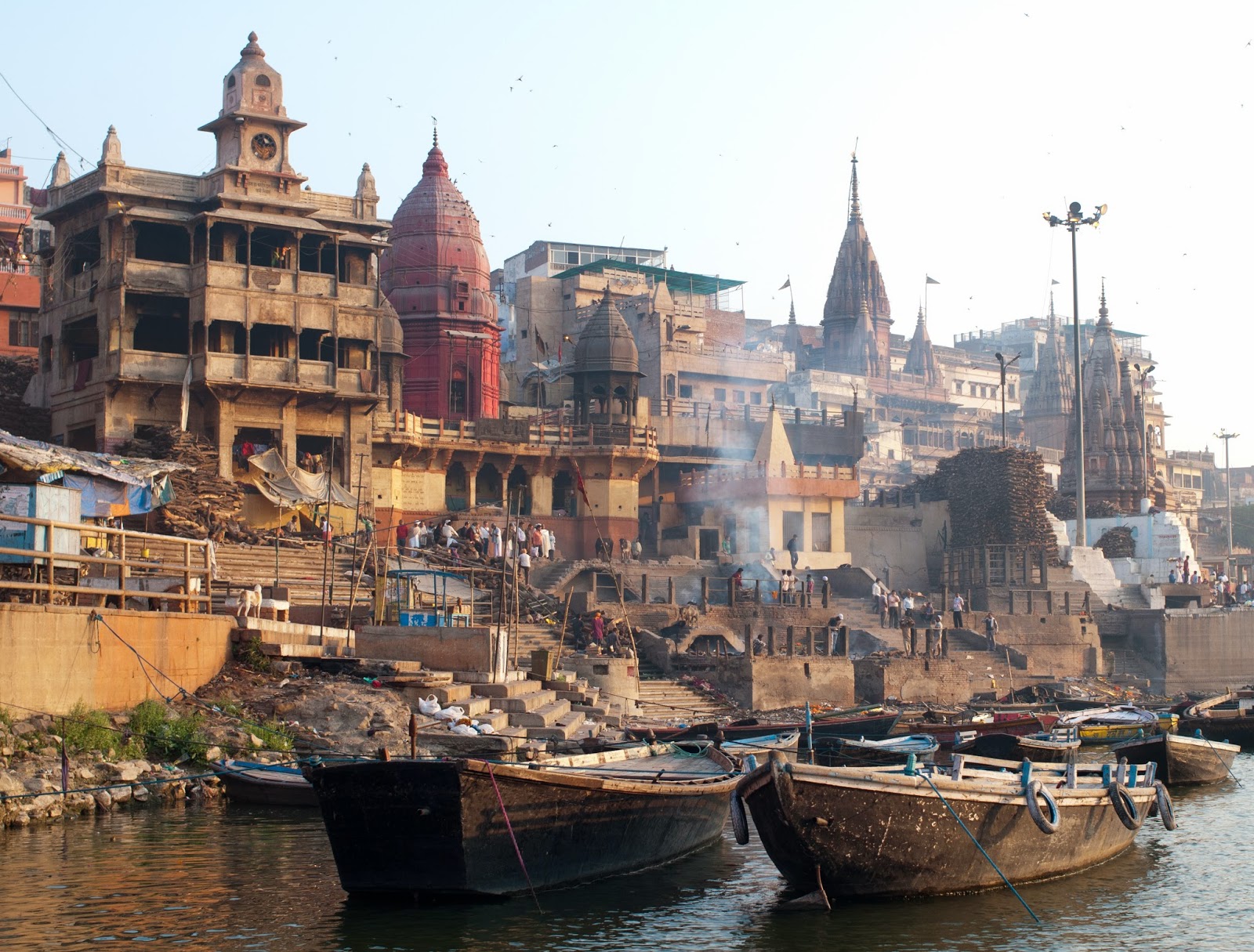 Corpses lie around awaiting their turn, wrapped in orange and gold. Pyres burn away at various stages of their work. Low caste doms pick their way through the detritus in the hope of finding some coin or piece of jewellery, while others hose down the shimmering embers. A chant then, or a drumbeat, and another body is brought here, past the cows, tourists and touts. Two hundred and fifty a day, if they're busy. 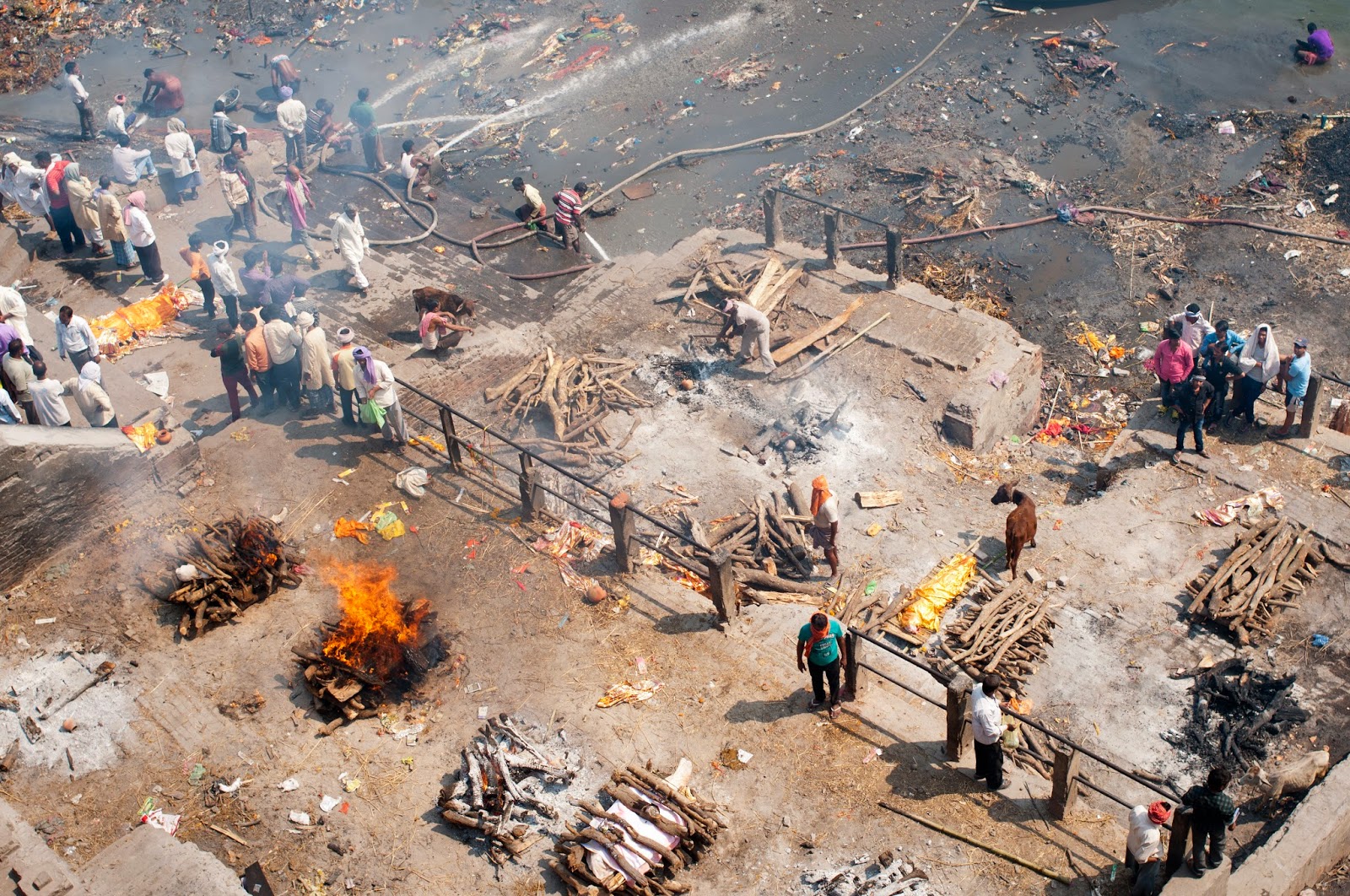 The scene might look and sound hellish, but it manages not to feel it. It remains macabre, how could it not, but it is not especially sombre. It is a functional place, where something necessary and good is being done. Hindus believe that once a person is born, they never die. Death is not an end but a transition, a time for respect, not sadness.

I’m not religious, but in my few days here I have realised how much I admire and respect the devotion and commitment of the Indian people, not just to their beliefs but to the patterns and realities of their life in general. It is humbling and endearing. And it reminds me that we can fear death so much, and not just death, but failure, judgment, darkness, that we forget to live at all. 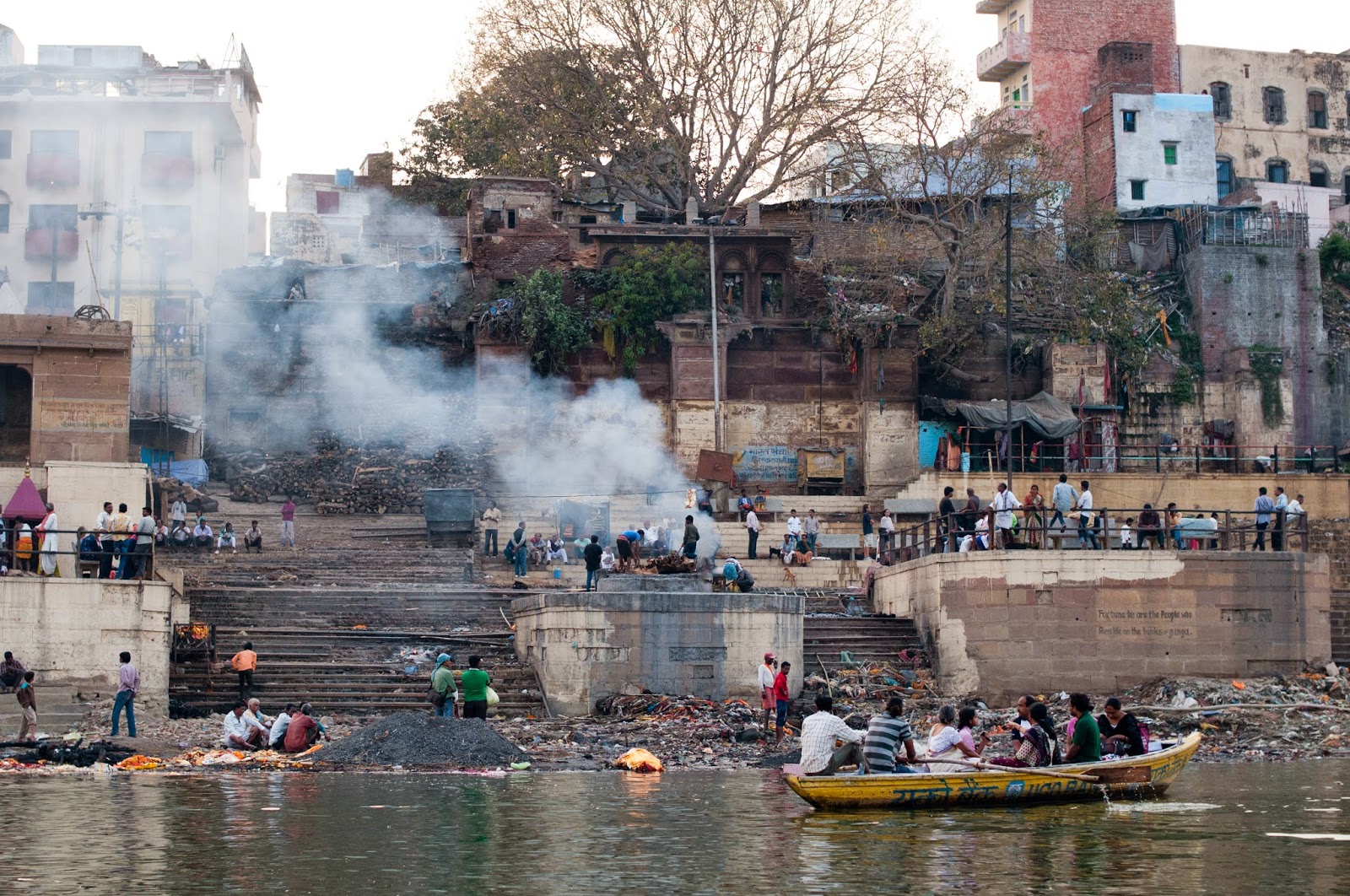 I'm here for three days but I want to stay longer. I want to understand more of Varanasi and its cultish ways, but I know it would assimilate me if I stayed too long. Prolonged exposure would subtly, progressively exorcise my sanity and reason. No doubt in time I would eventually succumb to the irresistible lure of the Ganges and dip a toe in the water one time perhaps. A toe, then a foot. Then a hand, a leg. Just a quick dip maybe....

From that point on I would hasten towards an untimely death. One day my corpse would be tethered to a bamboo litter and carried through the narrow streets for its final baptism in the mighty Ganga, filthy yet pure. I wonder if, as the fire consumed the flesh and bones, my soul might afford a last glimpse down at the magical city as it rose up from its host, indistinguishable by then from the sandalwood smoke that stung the eyes of the onlookers gathered there, as I once had been, and wispily eloped into the clear, dark night.
Posted by Joe at 13:57