The Search for Auroville

According to the map, ten kilometres or so north of Pondicherry is a place called Auroville.

Maybe it was just me, but it was impossible to find. The turning from the main road wasn't marked and as I got further inland, the signs were either hidden behind trees or the letters on them had been scorched away by the blistering sun. Even when I was on it, I mistook the red dirt road I needed to take for something else, expecting an actual road instead. Truth be told, I didn’t know what I was looking for, nor what I might find.

Which is not surprising, because Auroville is not so much a place as it is a dream:

There should be somewhere on Earth, a place which no nation could claim as its own, where all human beings of good will who have a sincere aspiration, could live freely as citizens of the world and obey one single authority, that of the supreme truth; a place of peace, concord and harmony

Such was the vision of Mirra Alfassa, a Frenchwoman who worked with Sri Aurobindo, nationalist turned philosopher and guru, at his ashram in Pondicherry. He identified her with the concept of the Divine Mother, and believed the two of them shared one consciousness. The Mother, as she became known, assumed full control of the ashram when he retired from public life in 1926.

The Mother conceived a “universal township” that would accelerate “the progress of humanity towards its splendid future.” The town would be Auroville – the city of the dawn. Endorsed by the Indian Government and UNESCO, which invited member states to participate in its development, it was triumphantly inaugurated on 28th February 1968. Architect Roger Anger (a Frenchman, so probably not as funny a name as if he were English), under the direction of the Mother, envisaged the city as a whirling galaxy, at the centre of which would stand the Matrimandir, or “Mother’s shrine.”

The Mother was still alive when the foundation stone of this mysterious monument was laid in February 1971.

The Matrimandir will be the soul of Auroville, and the sooner it is there the better it will be for everybody

Now I know nothing happens quickly in India, but when she said this, she probably didn't think it would take thirty-seven years to finish. Needless to say, the rest of it is, to put it kindly, still in the pre-construction phase.

When I saw the Matrimandir, in splendid isolation, it reminded me of a golf course I saw in Goa. Thousands of gallons of water soaked up by the lush grass, hundreds of man hours nurturing and tending it, and not a single golfer within a hundred miles. Build it and they will come – but it was built, and they didn’t. In a place that refutes religion, they built a cathedral, I thought. Then I changed my mind: a folly. (Later I remembered that la folie is French for madness. Touché.)

The top half of the Matrimandir is a chamber of white marble, at the centre of which sits the largest optically perfect crystal in the world. Sunlight is electronically diverted onto it in a single beam from an aperture at the apex of the sphere. It is a place for concentration aimed at finding one's own consciousness. It's not easy to gain access, but my friends Trez and Anthony are staying in Auroville and went inside the other day. Trez described it thus, "Was very cool architecturally, spiritually kind of zero....the silence was lovely." So that's what it takes to get a bit of peace and quiet in India...

The dream and reality of Auroville are a long way apart, and time is not narrowing the gap. Forty-seven years later then, the city of 50,000 Aurovilians is actually just 2,300 people scattered about the forest they planted. A thousand are Indian and the rest contain more French, Germans and Italians than all the other nations combined. Well over half the population are the wrong side of 40, and too many kids leave by their twenties, .

The vision seems replete with contradictions. Anyone, for example, can become an Aurovilian. But elsewhere in the literature it says one must “have some financial means of one’s own, at least sufficient to see one through the first few years in the township”. Assuming you do have enough cash, the process of acceptance is long and complicated, and you wonder if they are being too stringent to foster a community diverse enough to prosper. And the principle of collective decision-making, wonderful in theory, is debilitating in practice.

Wanting to be convinced, I took this map from the visitor centre and rode around to try and get a feel for it all. It’s impossible to know which places actually exist and which are just names on a map – Silence, Solitude, Bliss, Courage, Luminosity, Gratitude. There’s even a place called Miracle, which seemed ironic given that’s what they need. 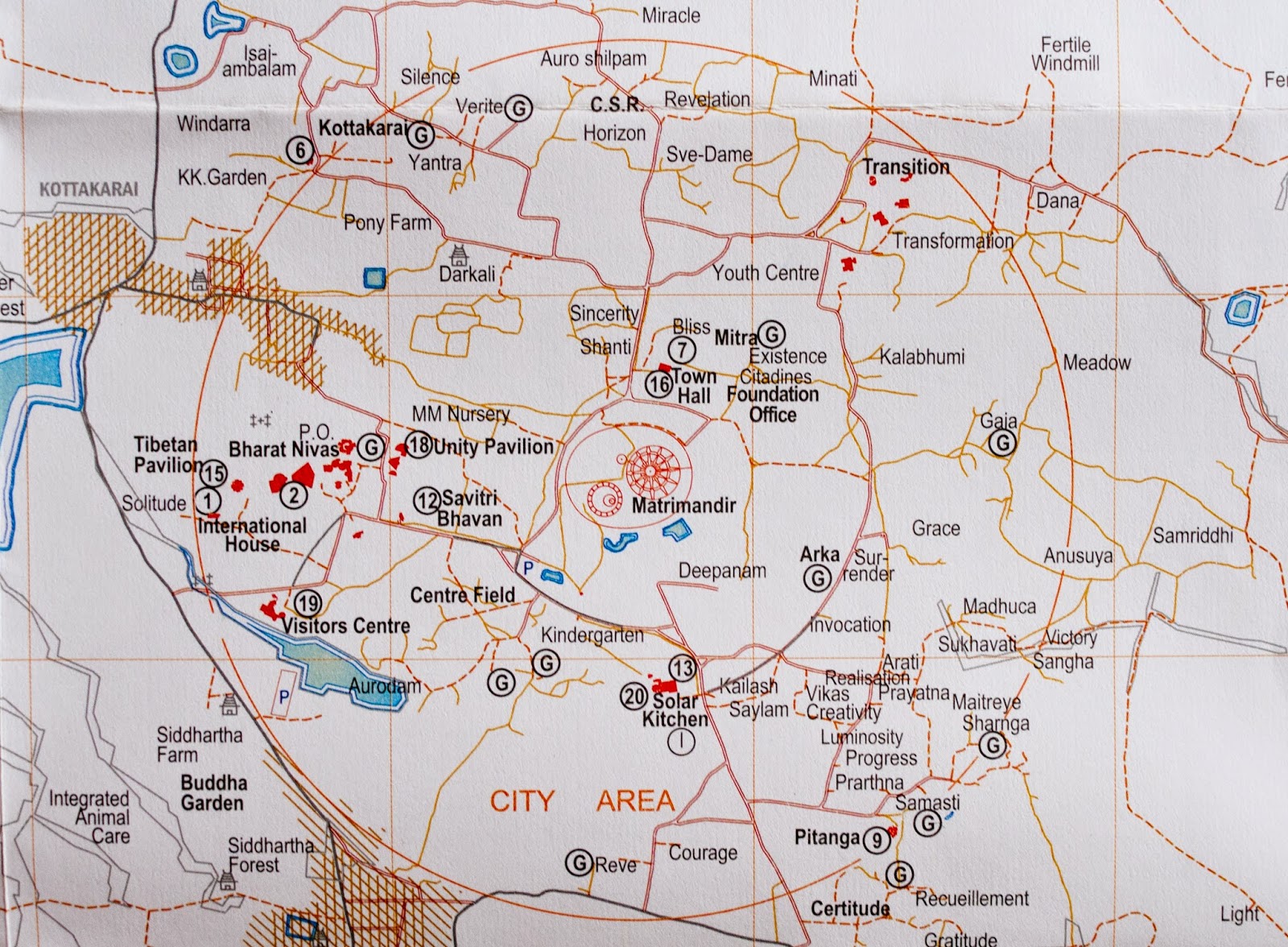 Auroville is nothing if not enigmatic, but the map didn’t help me solve its riddle. Neither did the visitor centre nor the old movies they make you watch, nor everything I’ve read since about Sri Aurobindo, the Mother and the Divine Consciousness. I love the notion of a place where people of all creeds, colours and nationalities can work and be together, united and not divided, with no money, no discord, striving for the spiritual and conscious evolution of the human race. But it is just a notion, and Auroville proves it.

Which is why, after half a century, middle aged Europeans are still sitting around, sagely discussing plans for their utopia. A utopia whose soul is a giant golf ball encased in fifty six kilograms of solid gold, in the middle of a city that hasn’t been, and never will be, built. The futility of their continued endeavour is the only thing I grasped about this curious place with any real Certitude.

That’s on the map too. If you find yourself in Reality, you’ve gone right past it. 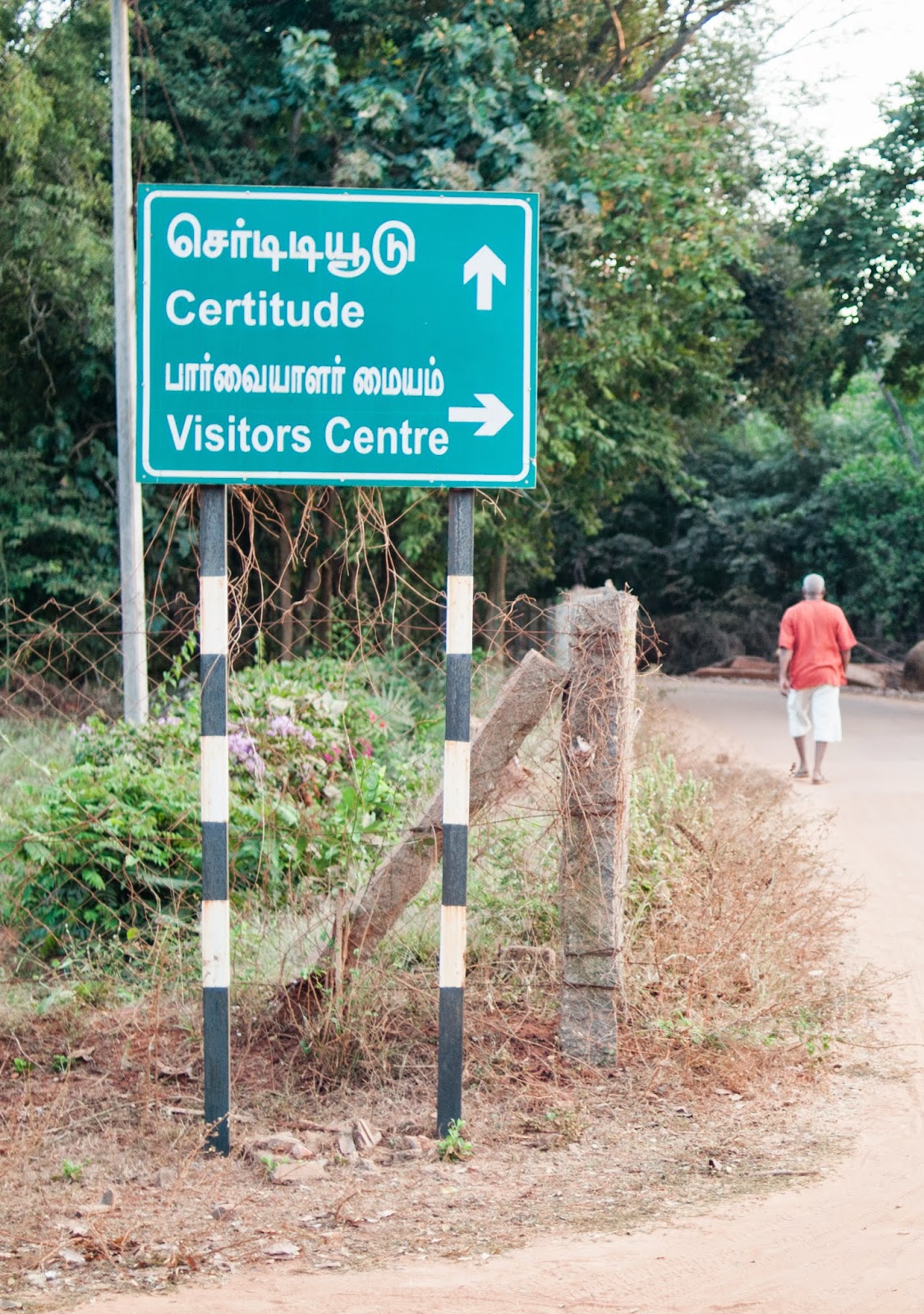