Writing about Angkor is a bit like visiting it; you don't know where to begin. It is ancient, vast and spectacular; you see, think and feel so many things in the furiously busy days you devote to it, that by the end you are completely knackered. But here goes...

The Khmer empire flourished in what is now Cambodia from the 9th to the 13th century AD. They were skilled and intelligent people; extremely efficient farmers and irrigators, and with the surplus wealth their talent generated, they built Angkor; the greatest pre-industrial city to have existed anywhere in the world. 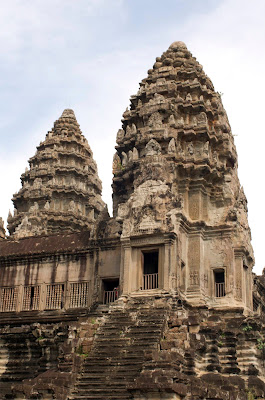 Angkor Wat is the largest and most famous of the temples to have survived, but it is only one of many. Each of them is a model of the universe; the central prasat or tower representing the cosmic mountain, the dwelling place of the Gods. From this centre the rest of the world, continents and oceans, fan out in an orderly fashion, in contrast to the primordial chaos.

The remains speak of different aspects of Khmer beliefs and techniques, shining light on the specific areas that they best articulate. Angkor Wat's size is matched for impact by the breathtaking detail of the stonework. Bas reliefs cover the five and a half kilometre perimeter wall, intricate carvings on every stone. 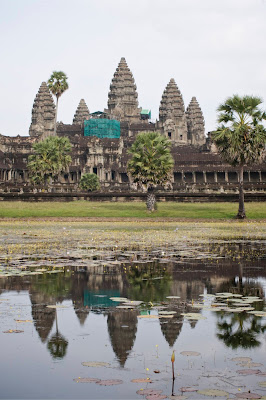 Angkor Wat from the south-west pool 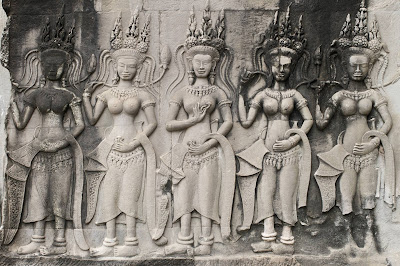 The temple of Banteay Srei holds the finest examples of carving, detailed and wonderfully preserved. Less well preserved, but in many ways more fascinating are those found at Kbal Spean, carved into the banks and bed of a mountain stream by the hermits who lived there. The extraordinary patience and craftsmanship required to create them testify to the strength of the Khmer faith, and how deeply it reached into the most unlikely places. 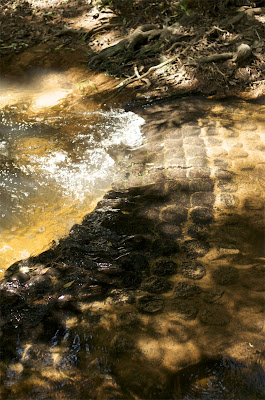 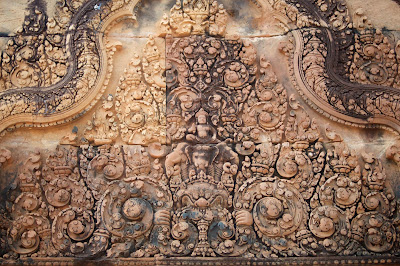 Elsewhere, the irresistible power of nature stamps its authority over the decaying buildings. Ta Prohm is the best example of a temple left at the mercy of the jungle, and looks today how most of the sites would have appeared to the first Europeans; overgrown, crumbling and unspeakably beautiful. Walking around it, picking your way over tree trunks, roots and piles of rubble, you feel closer to the essence of the temples, and the strange wilderness in which they fell into disrepair and abandon. 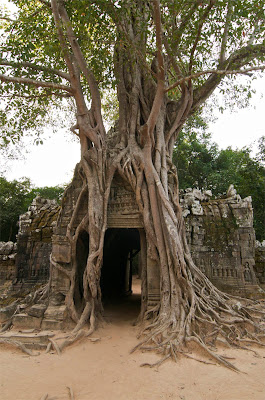 The east gopura at Ta Som 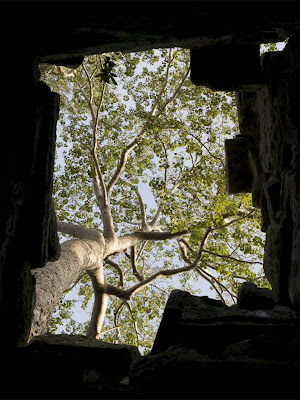 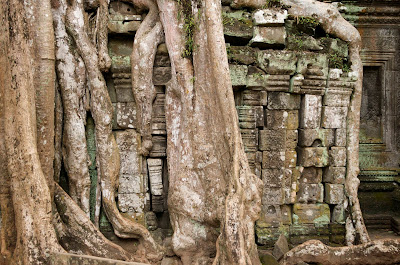 The jungle entwines the temple of Ta Prohm

I thought perhaps Ta Prohm would be my favourite, but it was usurped by an unsung hero, in the shape of Banteay Samré. It is in remarkable condition, the entire structure intact, and relatively small; so small that each enclosure is tightly shuffled to the next, making the incredible symmetry and structural perfection much easier to admire. And there is the added joy that comes from being able to leap across the narrow gaps from one continent to the next.

The sun's getting low in the sky, and with the walls so close to one another and the shadows long and crisp, Banteay Samré becomes a canvas of darkness and light. I doubt it is as spectacular as sunrise over Angkor Wat, but it is subtle and beautiful to see the little Khmer universe divided up like this. The light seems so important in Angkor; enhancing so many different qualities as it works its way around, shifting its focus to the tiniest corners and breathing life and detail into them. 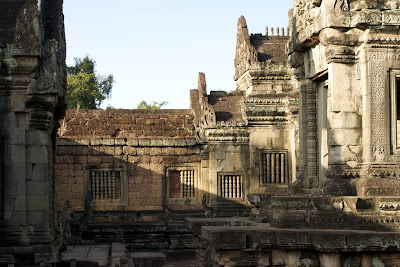 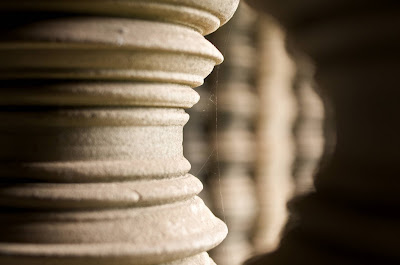 The Khmers placed lakes and ponds to reflect the temples and the world that surrounds them, multiplying their glory and wonder. A similar effect can occur inside the temples; when doorways line up in succession, or in long galleries the senses cannot count or measure. The impression they create hints at infinity; the multiplication of the world and an irresistible magnetism draws you inside or along. 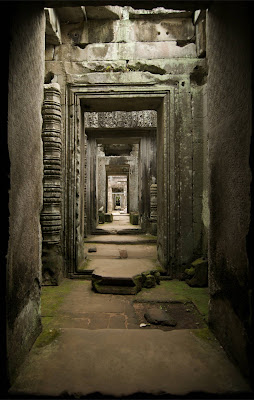 It's hard to truly envisage Angkor in its prime, and whenever you begin to grasp the size and scale of the city, it becomes almost overpowering. For every stone still standing, hundreds lie scattered all around you. 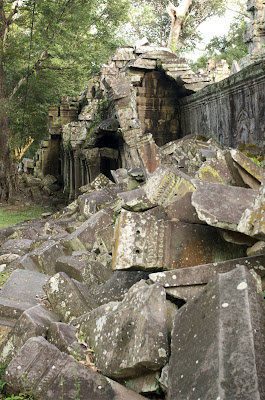 The Khmers built monuments to the order and structure of the universe, and then the universe clawed so much of it back, leaving a fraction of what once stood remaining. But so spectacular are those pillars that still reach above the water, that they hint at a world we can't really comprehend. To be lost in it, in the heat, dust and sweat, and to puzzle over it, is a joy and a privilege that should not be missed.
Posted by Joe at 06:18