The bus ride from Vientiane to Tha Khaek was a surprisingly comfortable and uneventful way to pass five and a half hours. Especially compared to the minutes preceding them, when the driver of our sawng thaew (half tuk-tuk, half pick up truck), realising his passengers had missed the bus, decided to pursue it instead, eventually catching up with it about twenty rickety minutes into its journey and flagging it down on the main road.

Not a lot really goes on in Tha Khaek. It sits on the Mekong, entertaining travellers using the nearby border, or stopping on their way north and south, like me. No-one really stays here for too long, but plenty use it as a base for touring inland. Renting a motorbike entails a long walk, and I get the last one, which has definitely seen better days. I rattle my way east, through fields punctuated by limestone karsts and pools of emerald green water; a kind of Halong Bay on land, but I have it all to myself. 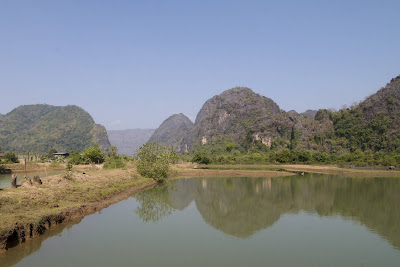 The towering rock formations shelter a number of impressive caves. I pull over at one and am immediately accosted by three kids, who offer to be my guide. On our way through the thin jungle, they pull long serrated leaves from plants, and sword fight with them. Sensing my disappointment at being left out, they procure one for me, which then entitles them to attack me whenever they wish. At the cave, I'm taking pictures, and when I turn round they've picked up my guide book and are looking at the pictures. They point at every white guy in there and ask if it is me. 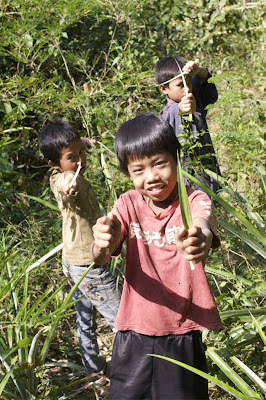 Pretty much everyone I pass on the bike waves and yells sa-bai-dii. Kids especially; often I can't actually see them, they're rolling in mud or up a tree or something, but I hear them and shout back as I trundle on by. The scenery, the pure colours that surround me and the unbridled joy of shouting and waving at people leave me completely elated. It's a sense heightened by my solitude, and that wonderful feeling you get of being on an open road and completely in control of your own destiny. 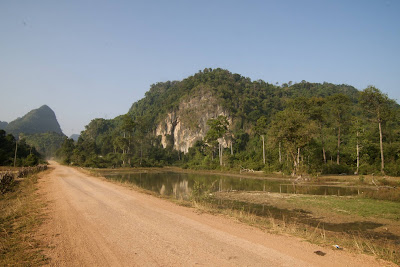 Then the throttle cable snaps. It could be worse; I passed some houses half a mile back, so push my untrustworthy steed through the dust. Luckily enough, one of them is a shop, specialising, amongst other things (most other things), in motorcycle repair. The guy comes out, followed tentatively, one at a time, by his kids, each of whom stares at me then runs away laughing. As he dismantles the front of the bike, I watch a chicken pecking his way through the house and pissing all over the floor. Unbelievably, he cheerfully produces a replacement cable, which he supplies and fits for the princely sum of 20,000 kip (£1.60 or $2.50). I buy him a Beerlao as well and carry on where I left off.

By now the sun has dropped a little further, and the light is incredible. I ride the eight kilometres or so back to the main road pretty slowly, soaking up the golden light and thinking how great life is when you strip it back to its purest form. I get a few lungfuls of dust for my trouble, but in all honesty, they only make me more certain. 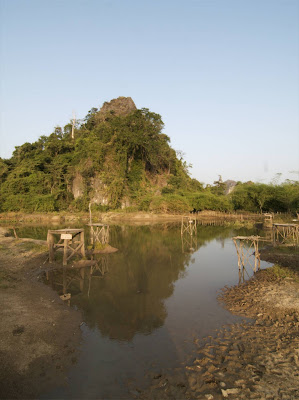 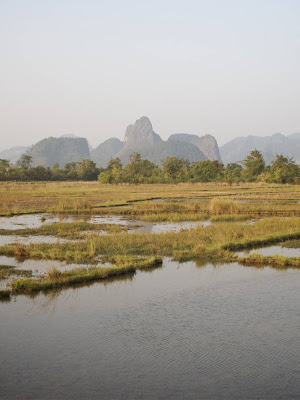