There were moments in the last three days in Hue when I dared to believe it might, and even a very fleeting hiatus when it seemed as though it actually did, stop raining, but none of them undermined the sense of perpetual inundation. In Merquez's One Hundred Years of Solitude, it rains in Macondo for four years straight, and I think a similar fate may have befallen this ancient city.

Being English, I refuse to yield, and stoically venture forth in my giant poncho (designed for motorcyclists, with a large clear square at the front for the headlights that aligns neatly with my groin area and precludes any surreptitious ball-scratching). When I find somewhere to get out of the rain and have a coffee, I feel like I am sat in a wind shelter on some dreary seafront; a pebble beach, incessant drizzle, and nothing to engage my interest but soggy sandwiches and a packet of pulverised mini-cheddars, washed down with luke-warm coffee from a tartan thermos.

On the basis that I haven't travelled around the world to sit in misery, I decide to skip town. But first, and somewhat reluctantly I have to confess, to take a tour of the city and visit a few historical sites (Hue being the ancient capital and all that). My surprise was matched only by my delight.

The tomb of Tu Duc, the last de facto emperor of Vietnam, is a sprawling place, lying peacefully on the outskirts of Hue. The complex of buildings was completed in 1867, a good sixteen years before his death. Tu Duc passed most of those remaining years loafing around the place; hunting, fishing, writing poetry, picking flowers and screwing concubines, whilst natural disaster and famine ravaged his empire, by then under French colonial rule.

The extraordinary serenity of this ivory tower belies the brutality with which it was built and the lives lost in its construction. Tu Duc might have had dandyish habits, but he was an evil bastard too. His body doesn't lie here, but in an unknown location in Hue, and the 200 men who interred him there were subsequently beheaded to preserve the secret. 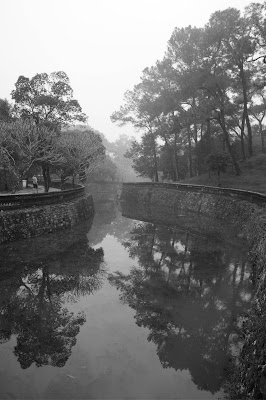 The pristine reflections of the trees in the water suggest two worlds; one real, the other imagined. I'm glad it's raining - the mist and drizzle frame and complement the eeriness and, as I walk about, the line between those two realms blurs. The old concubine's pavilion is as haunting a place as I have been. Ghosts, if I believed in them, would skitter across the lake. 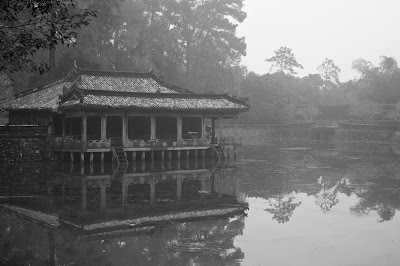 Tu Duc's life was wrought with contradictions. He was well aware of his failings as an Emperor, and castigated himself by renouncing hunting (!), penning self-critical verse and beseeching forgiveness at the ancestral altar. He felt cursed too, rendered sterile by smallpox, heirless and unloved. The torment of his soul permeates this strange, beautiful place, where sadness smiles and joy weeps.

Maybe that's why it won't stop bloody raining.
Posted by Joe at 05:11

Email ThisBlogThis!Share to TwitterShare to FacebookShare to Pinterest
Labels: Vietnam