Well that didn't take long. I rocked up at Savannakhet bus station just before 8am to discover the 8am is actually at 9am. Oh well, je ne regrette rien. I ended up sat next to an incredibly beautiful Laotian girl for my troubles, one of a group of trainee midwives heading to Pakse for some exams. Their teacher was sitting in front of me and immediately set about trying to marry us off to one another, which made for an entertaining five and a half hour journey.

As if that wasn't enough, every time we stopped (and we stopped many times) we were boarded by marauding women and children waving bottles of water, barbecued chicken, boiled eggs, bags of sticky rice and beef jerky. Hilarious scenes ensued as they clambered over the plastic stools in the aisle whenever we took off with them still on board. The toilet stops were no less amusing, men and women filing neatly into the bushes to splash their boots.

After wandering around Pakse, busier than other towns along the way but with Laotian charm surviving intact, I took myself down to the confluence of the Mekong and the Se Don to watch the sunset. Another English guy turned up a few minutes later, and we drank our Beerlaos together. It took about ten seconds to establish that we had been to the same Sixth Form, at the same time, and though we didn't exactly know each other, we shared plenty of friends in common and had both been at one of them's wedding last year. It had to happen sooner or later in a world this big. 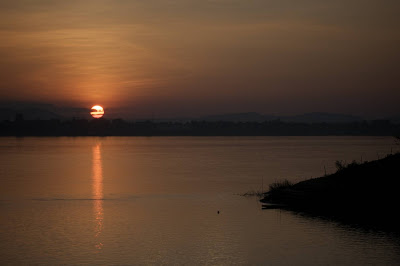