A mere 150 kilometres but four stifling hours' drive from Hanoi lies Halong Bay and its 3,000 limestone rock formations. To see them, you need to take a boat tour, and there seem to be almost as many of them as there are islands.

The drive is horrible - a cramped minibus, crowded roads and a noxious combination of traffic fumes, dust, mist and pollution. Only the conveyor belt of mopeds and their unlikely loads provides any kind of distraction - chickens, kittens, pigs, bonsai trees, bags of goldfish and the star prize, a dead cow.

The port, when we get there, is chaos. We stand around being choked by the idling engines of a hundred coaches and minibuses as they shed their cargos of Chinese tour groups, strange little pic'n'mixed Europeans like us and marauding bogan Aussies in green and gold sombreros. It doesn't get any better on the water, where the junks are crashing into one another as they jostle for position. 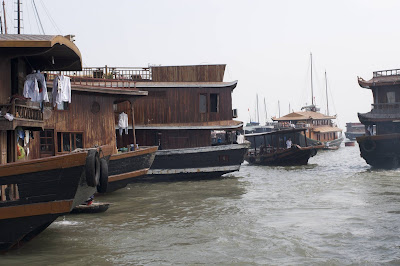 Thirteen of us make it out in one piece and board a surprisingly comfortable and well appointed vessel, but sadly the weather is shit. There's a thick fog, and the sun is burning through it, not shining. Colours seem to exist only within a short radius of our craft, and so much of the magic is lost as we sail around the islands and other boats. The water is true emerald green, but dirty, debased by the filthy engines of the junks and the detritus we cast in our wakes. 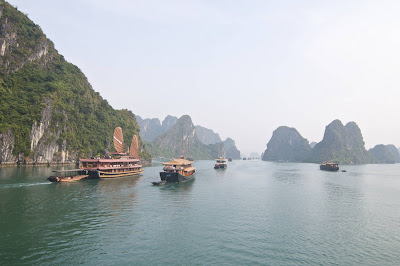 With all the competition between boats and tour groups, we have a regimented schedule to stick to. In its name we are filed through some caves that would be spectacular were it not for the thousands of punters, gaudy lighting and the fact that our poorly regulated presence is doing a lot more harm than good. 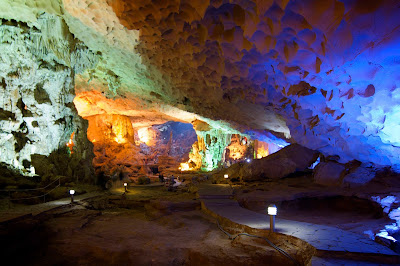 Specatular caves, but lit up like a chav's house at Christmas

We kayak around for a while afterwards, eventually managing to get away from the junk exhausts, which is rather pleasant, and an exceptionally red sun appears briefly through the fog before dropping unspectacularly from sight. We paddle our way to the dock, where smaller boats are ramming the frail jetty, and chug back to the mothership. 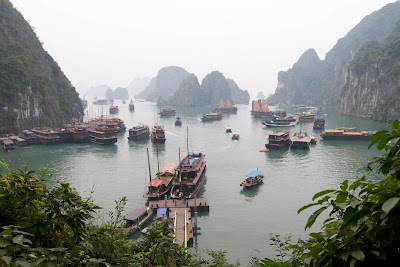 On the deck we sip beers and discuss the world's problems into the middle of the night. A small core of us manage to frighten the rest off to bed with discussions of Papacy, Booze Britain (in Amsterdam they drink a potent shot called a Booze Britain), Norwegian church burners, Branch Davidians and various other topics of salient interest. It gives me an idea for a new reality show called "Conversation", but I guess it won't work since most of the people who go on them can't actually hold one. 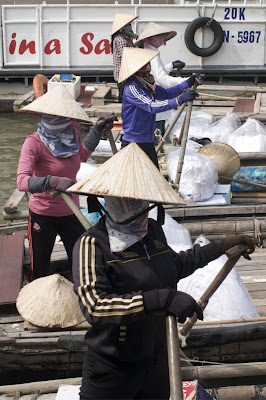 The tour companies overcharge for alcohol on their boats, so enterprising Vietnamese women (always women) paddle small row boats around the junks hawking their own. I buy some in order to support fledgling entrepreneurism in a supposedly Communist country, before realising I paid her the same as behind the bar. Bravo. Other boats anchored near us are flashing nasty disco lights as naked drunks jump into the water to raucous cheers, or full of Chinese people systematically murdering karaoke songs.

Halong Bay is on the shortlist for the new seven natural wonders of the world. It is clearly wonderful, and an extraordinary gift of nature, but that's not enough. You need to be able to visit and appreciate these places in a way that befits and protects them, and that is just not happening here. The National Parks of the US, and places like Iguazu Falls, so brilliantly accessible and eco-conscious are the benchmark for this, and Halong Bay falls a long way short. The beauty is there, if only they knew what to do with it. 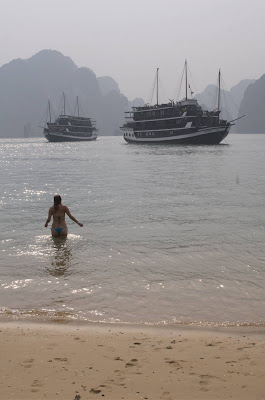