Travelling direct from Luang Prabang to Hanoi is like slipping excitedly under the bedsheets with a shimmering blonde goddess, and waking in the morning to find yourself straddled by Mr T, furiously bitchslapping your startled jaw with his bejewelled hands and urging you to "Get Some Nuts".

Insects. Insects with big bulbous heads and upright bodies. Sometimes two or three of them hugged together on the carapace of some other luckless creature. The nearer the city, the more they multiply. A trickle to start with. Then tens, hundreds, thousands and then millions. Quite literally, millions of them, everywhere.

A biblical swarm of angry two wheeled bees buzzing furiously and fanatically around the great hive of Hanoi, choking out their cheap gasoline fumes. Somewhere in the middle of them throbs a truly great city, but I just can't see, hear or smell it for the mopeds. 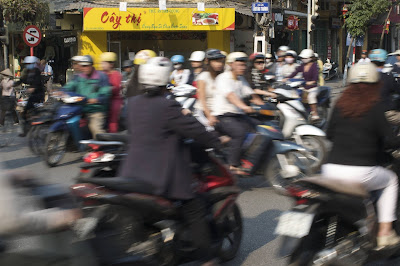 Hanoi doesn't exactly lend itself to simple orientation. Roads change name every block or two. Side street names might actually apply to any number of roads in the same vicinity, and they suffix building numbers with letters completely randomly. Signposts and street signs are scattered arbitrarily around the city, the only rule being that they are never there when you need them, and always when you don't.

Should you be lucky enough to find what you are looking for, it will almost certainly be a minute or two past 11:30 and you will need to find a way of passing the next two hours before they reopen. If "they" are the Immigration Police, find yourself a nice quiet park to escape the traffic, then puzzle over why it is completely empty, stare across a rather serene lake and wonder, again, just where the bloody hell everyone is going all day long. 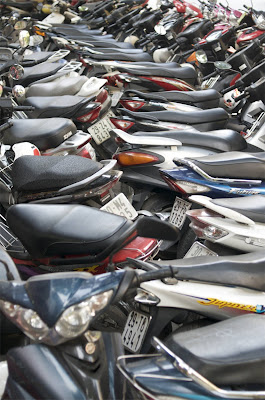 Try and pick your way back if you can, but remember that sidewalk is a complete misnomer here, since the paved area next to the road is actually a giant parking lot for mopeds, and the dining rooms of tiny restaurants, all laid out with unfeasibly small chairs that even a three year old would struggle to sit on. Walk in the road instead, with all the other crazy bastards and ask yourself, once more, just where in the name of God they are all going? Even the hot girls in fake Burberry helmets with bug eye shades. 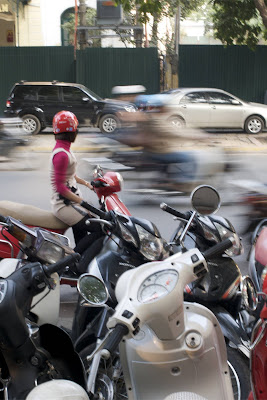 Crossing the street is an act of considerable faith and courage, but actually quite liberating. We're far too up tight in western society - too many rules, regulations and inhibitions. To look at this place you would imagine people were dying on the roads every few seconds, but they don't even come close to brushing wing mirrors. In the absence of any kind of highway code, cars, buses, mopeds and pedestrians (and their cargo) wind in and out of one another like Han Solo flying the Millenium Falcon through the asteroid belt. 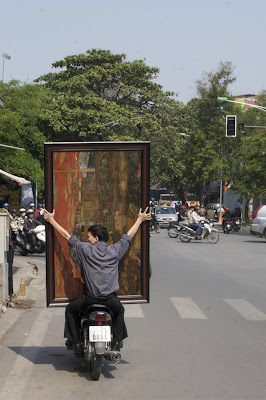 It is utterly enthralling to watch and a part of me, the evil part, really wants to rent one of those bad boys out....
Posted by Joe at 09:32