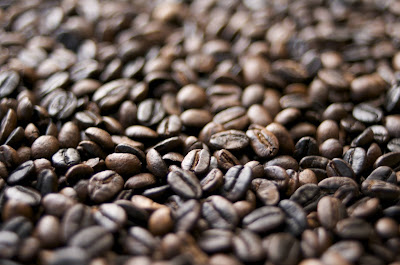 Shortly after half past seven in the morning, freshly showered and my fast inadequately broken by a plate of fruit, a stale baguette and a cup of crap coffee, I squeezed into a well worn crash helmet, fired up my brilliantly named Suzuki Smash 110 and slipped conspicuously into the stream of early morning traffic snaking its way around the busy streets of Pakse.

Riding into the rising sun, and the rising ground of the Bolaven Plateau that sits 1,300 metres above sea level, one by one my co-riders disappeared from the highway and I found myself again in glorious isolation. An hour or so and fifty kilometres later (either the speedo or the milestones were lying, since I never dropped below sixty), in the remote town (read village) of Paksong, I finally pulled up and prised my numb buttcheeks from the saddle. There was a sign by the side of the road. It said Coffee.

The French introduced coffee to the Bolaven Plateau in the nineteenth century. After a brief lull when the Americans bombed the crap out of the place in the 60s and 70s, production is booming again, and almost everyone in Paksong is involved in the business to some extent. Coffee trees grow by the side of the main road, and in plantations that back onto people's simple houses.

A Dutchman, whose passport says Cornelius but has been called "Coffee" since he was a toddler, lives here with his Laotian wife, herself from a long line of coffee growers, and runs tours and workshops for the bean loving tourist, as well as offering a cup of his finest to anyone passing through.

In the morning we wander around, look at coffee trees and learn from Coffee the whole process of cultivation, harvest and production. Out the back of his house family members pour berries into an old tomato skinning machine, and wade around in the resulting beans, before they are laid out to dry. There are different ways of doing this - some are cleaned in water, some are not, absorbing more flavour as a result. 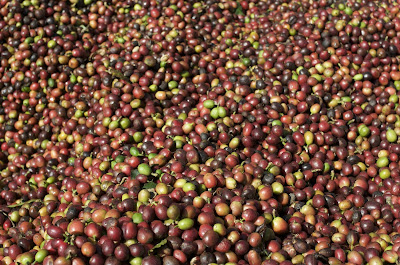 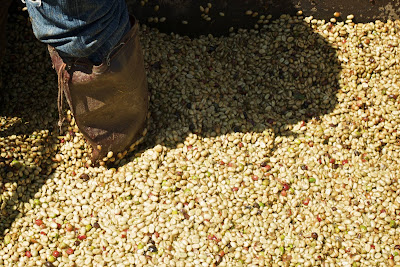 Beans from the berries 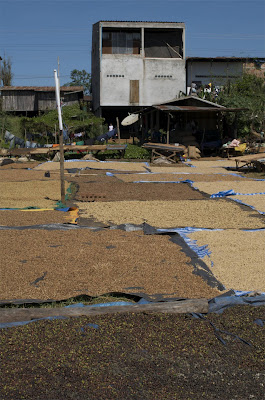 Drying in the sun
Coffee hand picks the best beans and hand roasts them in an old wok. Since the green beans come from different plantations, have been processed differently, and roasted in individual batches, there is no consistency to the result. Actually that's not true - the only consistency is that the coffee is of an exceptionally high standard, and the differences are the real beauty of this method. 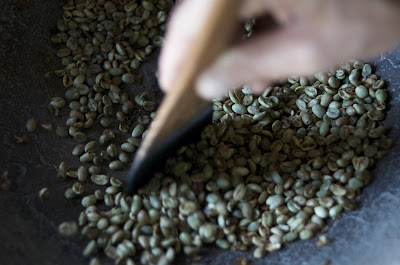 Green beans in the wok
He teaches me to wok roast. As well as the basic technique for keeping them moving around, it's a question of understanding the different stages and recognising how the colours, aromas and sounds change. Somewhere between a light and medium roast, the now browned, fragrant beans are stylishly cooled. They're best a week or so after roasting, but I haven't got that long, so we grind a few and I sip the satisfying fruits of my labour. 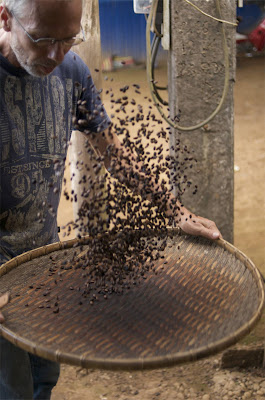 Cool your beans
This is coffee with character, like fine wine. Every single cup produced in this way is an expression of something else; the beans; where they're from, how many there are. The weather; how the wind blows over the wok, how much moisture in the air, how hot it is. The roaster; what mood they're in, how they stir and for how long. How quickly they're cooled, how they're ground. If you want the same taste every time you drink a cup of coffee, try Nescafe Gold Blend. It's nothing if not consistent.
Posted by Joe at 19:29