It wasn't quite so much a "secret hint" that finally led me to Vientiane, more of a persistent niggle. Only my lackadaisical planning kept me away on my first trip to Laos, and there was a kind of symmetry to the fact that some Laotian nonchalance should combine with it to shorten my time in Vietnam and bring me back.

At no point does Vientiane ever feel like a city. It's busier than Luang Prabang, and exhibits a few more trappings of modernity, but compared to say Hanoi, it is a mere sleepy village. The bars, restaurants and guesthouses cluster around the centre of town. In between them, sumptuous golden temples sit snugly, and bouganvillea hauls itself lazily over over the walls. 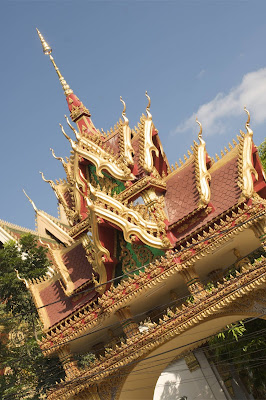 Old colonial buildings and villas line the streets, in varying stages of decay. The Lao National Museum resides in one such place, black streaks and the stains of time obscuring it's once white walls. Inside, a series of interesting but dusty exhibits share space with a pretty impressive range of semi-automatic weapons, and photographs with captions like Comrade So-and-so single handedly captures American Imperialists. Apart from one old lady on the front desk, there don't appear to be any other people here, until towards the end I hear excited voices and the now familiar clinking of petanques, as the entire staff play boules and drink Beerlao in the shady courtyard out back. Behind it, the National Stadium has a kind of Escape to Victory feel to it. 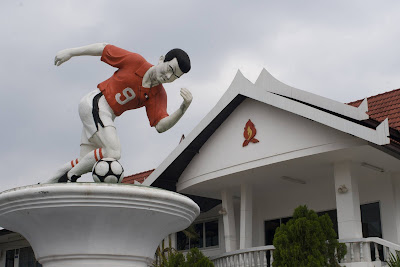 There's enough traffic to kick up a few fumes. Jacked up tuk-tuks where you sit on a bench at a 30º angle and try not to slide out the back, a few mopeds, and vintage VW Beetles. I would say there is a "heavy" police and military presence, but that would imply some level of intimidation or a sense of lurking oppression. There are a lot of them, and they do have guns slung across their backs, but half of them are asleep and the other half are directing traffic at every intersection, in complete contradiction to the perfectly functioning traffic lights. 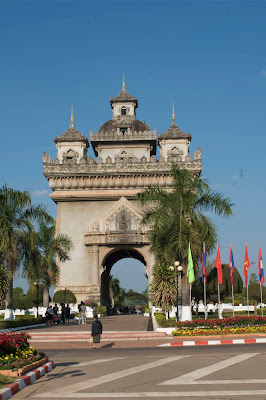 From the Presidential Palace a wide Parisian boulevard stretches north to Patuxay, a sort of poor man's Arc de Triomphe, made entirely out of cement that was meant for a new runway. It has a kind of cracked charm to it, interrupted only by the few floors of market stalls hidden inside it's upper levels. 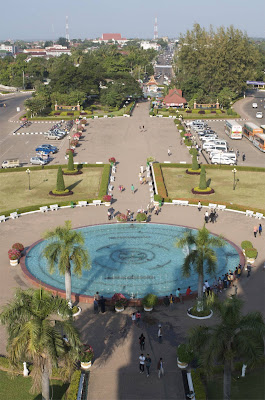 The French influence doesn't stop with wide streets and pointless arches. Everywhere you go you can smell freshly baked baguettes and croissants. The coffee here is as good as I have drunk for months. The women are beautiful and elegant. Nearly all of them wear Lao skirts, or sinhs, of long, narrow, delicately patterned silk. According to the Vientiane Times, the styles


..not only represent the variety and abundance of our natural resources, but also the inner hearts and minds of the people, expressed through their gentle manner, attitude and behaviour.

Continuing the long walk out of town, past women selling lottery tickets and street food vendors, you eventually arrive at Laos's most important site, Pha That Luang. It dates from the 3rd century but has been constantly rebuilt over the years as it fell into ruin or was plundered during wartime. It's current incarnation is glorious. It strikes me that most of the buildings are allowed to fall into gentle decline and no one seems to mind, except for the temples, the people's pride and joy. 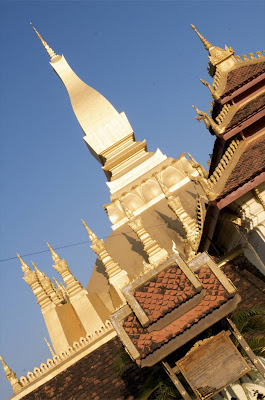 The clues are there I suppose; Presidential Palace, wide avenues, triumphant arch, symbolic temples, superfluous security. It might not feel like a city, but it is the Capital. The white guys in suits, too; embassy staff and NGO workers, I guess. They mingle effortlessly with the orange robed monks and flip-flopped backpackers in the tapestry of Vientiane's streets. This is whole heartedly a place in which to sit quietly, drink coffee or beer and watch the world as it trickles past at its own sedate pace, pausing occasionally perhaps, to join you for a few moments over a pastis, before sliding gently on by.
Posted by Joe at 20:19