Hanoi: a tale of two cities

I won't lie. I didn't lie. It must have been obvious. I don't like Hanoi. I'll live - dust myself on, keep going. It doesn't matter.

Except it does matter. And for one reason; someone I've only met a few times, a subversive hard-smoking chain-drinking German philosopher poet journo, who I instinctively like and respect, told me it's his favourite city in the world. And that's been bothering me, because I must have missed something. So I came back. 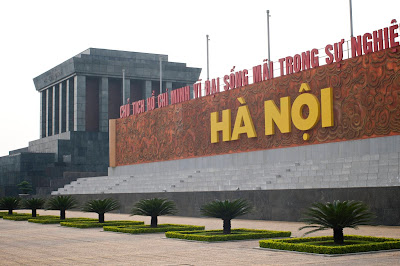 The first thing I do in a new city is go for a walk. I'll walk for hours, trying to get my bearings; not just the geography, but the soul of a place too. I walked for two days in Hanoi trying to get a grip, but to no avail. On Saturday night I pulled up a small plastic chair outside a Bia Hoi joint, and realised where I'd been going wrong. I'd never thought to stand still.

There are two cities in Hanoi; the one that's moving and the one that's not. The former washes in and around the latter. It is manic but magical. When you are moving with it, you're just another molecule being flushed through the pipes. You don't really see the other city; it passes by in a blur. So I sat and drank my beer and watched in wonder and realised what a great place Hanoi really is. How unlikely yet perfect is its harmony; the order resurrected daily from the chaos, unchoreographed, unfeasible and so irrefutably human in all its joyous complexity. Mopeds and all.