I like Vietnamese food, but must confess to having been a little disappointed over the past couple of weeks. Restaurants, street vendors; some good, some bad, nothing brilliant.

The most famous Vietnamese dish must be phở - noodle soup. I used to slink off down Huong Viet on Englefield Road and eat bowls of the stuff for lunch on my days off. Yet despite being a Hanoi specialty, the best pho on this trip was in Tempe, Arizona. Until last Thursday that is, when it was surpassed by one I made myself.

Cooking classes are ten a penny in Hoi An. Most places offer classes whenever you feel like it, but I plumped for Red Bridge Restaurant. The day began with a visit to an organic garden outside of town. Some 200 families maintain it as a co-operative, and they grow just about everything here. Each tiny rectangle of land is hand cultivated, and their combined effect is one of great tranquility, like a giant Zen Garden being meticulously raked. 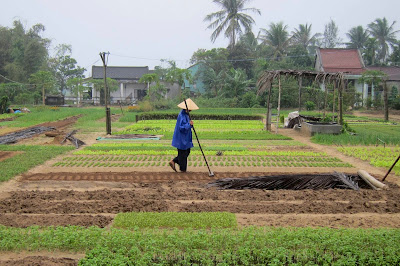 Not so tranquil is the market we visit next, but the produce is extremely fresh, and it's a lot cleaner than some I've been to in this part of the world. They also have the weirdest chicken trussing technique I've seen so far. As with everywhere else in South East Asia, nearly everyone working here is a woman, and the butchers are exclusively female. 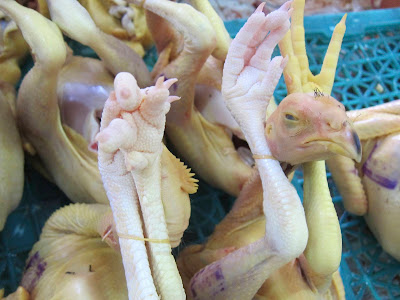 Good pho is all about good stock. We brown beef shins over a charcoal fire, as well as grilling shallots, onion and ginger. All are then blanched to remove the smokiness before going in the pot with all the spices. While that simmers, we prep the pickle, veg and herbs, and make the rice noodles from scratch. With the right kit and a bit of patience it's fairly simple, and a lot more rewarding than taking them out of a packet. 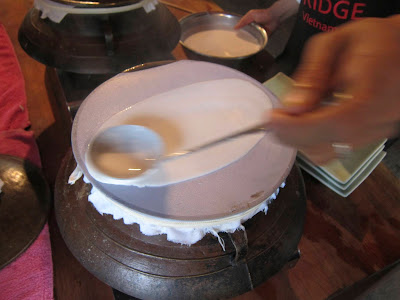 The result is divine, as good as any I've had, and now I've got the recipe. I chalk up another dish on the menu that has been slowly writing itself in my mind these last few months. 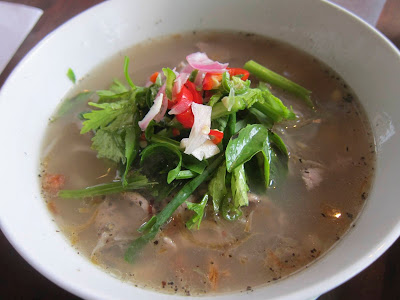 We also make a fish claypot, a chicken and banana flower salad and lemongrass shrimp in banana leaves. The latter is extremely good and will be added to my barbecue repertoire just as soon as I've grown the banana tree. The fish is basically Cha Ca, another Hanoi specialty. Mackerel marinaded in turmeric, cooked with dill and spring onion then topped with peanuts. There's even a street called Cha Ca in Hanoi, where establishments of varying quality purport to be the original Cha Ca La Vong, a fifth generation restaurant selling nothing but, though viciously overpriced. 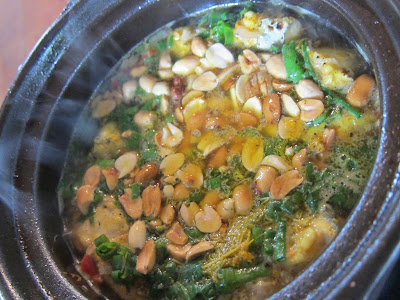 Hoi An has its own local dishes, the best of which is Cao Lau; thick, doughy noodles served in broth with sliced pork and rice paper crutons. White Rose are small open dumplings made from the same batter; both are only available in Hoi An, since the water used to make them has to come from the nearby Ba Le well. So insulted would they be if you attempted to make them without it, they all refuse to show you how they're made.

This is all well and good, but I'm getting the impression that I was spoilt in London. I know other cities have big Vietnamese communities, and anyone from Melbourne will tell you how great the food is down Victoria Street, but there's a dingy little community centre in Hackney where the chairs are uncomfortable, the staff unfriendly, the service unpredictable and the food way, way better than anything I've had in the homeland.
Posted by Joe at 05:33