Tuol Svay Prey was a High School in Phnom Penh until April 17th 1975, when it became a prison, designated S-21 by the Khmer Rouge.

Classrooms were divided into cells one and a half metres square, to hold the enemies of the revolution; peasants, workers, technicians, engineers, doctors, teachers, students, monks, ministers, soldiers, foreigners, people who wore spectacles. The purpose of their incarceration was to extract confessions by means of torture in order to justify their subsequent execution. 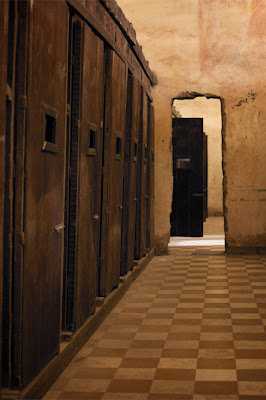 Of the 20,000 people who passed through Tuol Sleng, only seven survived. Each prisoner was photographed, but there are no names to match them, just faces. Human lives reduced to a single moment in time, and it's as though the camera captured just one emotion on each face; confusion, fear, anger, surprise, terror, defiance. Others are just shell shocked, some are even smiling. As a whole, the banks of faces become a palette of human emotions, staring out from beyond the grave. 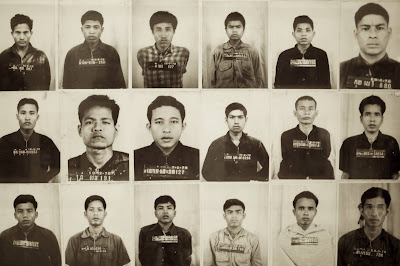 They weren't executed in Tuol Sleng, but were driven to a Killing Field at Choeung Ek, 15km away, where they were beaten to death with bamboo sticks, hoes and shovels, in order to save bullets. A loudspeaker hung from a tree playing party music to drown out the screams as the pummelled bodies were thrown into mass graves. Babies were smashed against trees in front of their mothers before they were raped and bludgeoned. There were 343 Killing Fields like this is Cambodia, with over 19,000 mass graves, and between them they accounted for somewhere between 1.5 and 2.5 million deaths. No-one knows.

Just under 9,000 bodies have been excavated at Choeung Ek, and their skulls are displayed in a shrine, seventeen storeys high. After heavy rain, more bones and remnants of clothes work their way to the surface, and are collected and preserved. Many of the graves burst open, a result of the gases built up within the corpses they were designed to conceal. 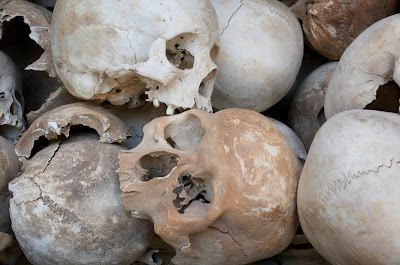 Pol Pot survived for twenty years after these atrocities were committed, dying under house arrest. The first trial of a Khmer Rouge official began in 2009, resulting in a 35-year prison sentence for Comrade Duch, despite his admission to the torture and murder of thousands of Tuol Sleng inmates. Four more await trial, but the hundreds, or thousands, of Khmer Rouge footsoldiers responsible for carrying out their orders, guilty of murder, torture and rape, are living normal lives in Cambodian society today.
Posted by Joe at 04:18