Phnom Penh used to be known as The Pearl of Asia, which makes it sound more like a dodgy Chinese restaurant than a capital city. But it seems deserving enough of some kind of romantic moniker, rebounding from a turbulent recent past with considerable optimism to embrace the 21st century.

It's a nice city to walk around. I'm staying down by the riverside (with all the other tourists) which is pleasant enough. Flags flutter in the stiff breeze, and when the temperature finally drops, kids play football on the promenade and couples (boy/girl, boy/boy, boy/ladyboy) walk hand in hand or sit and stare out over the river. 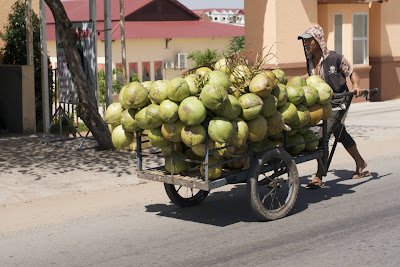 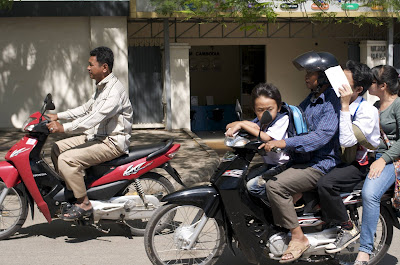 Like other cities in Asia, there's a real buzz and energy coming off the streets, and not just from the rotting market detritus or occasional badly ventilated sewer. It's busy, but not Hanoi busy. The people are friendly, but not Laos friendly. But that energy that makes cities interesting and exciting, is usually the result of contrast and clashes. Rich meets poor, east meets west. And the result of that meeting is not always pleasant.

There is a huge, yawning gap between rich and poor. The hotels, bars and restaurants are incredibly expensive compared to elsewhere in the region, but still busy. The money is flowing in then; plenty of 4x4s on the roads, designer boutiques and flash French restaurants testify to that. But among them are the symptoms of an extreme poverty. The market next to my hotel is a thriving hub of commerce by day, and a home to street families by night. 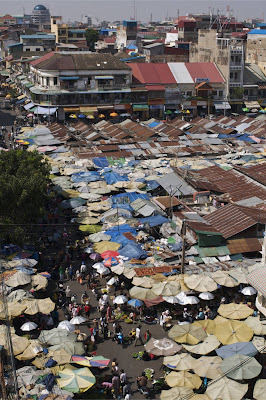 In Siem Reap, the landmine victims were either booksellers, hobbling about flogging glued together photocopies of guidebooks, or in bands playing traditional music. In Phnom Penh they just beg, and any success they might encounter only serves to encourage others; children, mothers with babies.

I've sounded off about the sex-industry in Asia before, but when you turn onto a street and the bars are called things like The Pussycat and Beers and Babes, where fat, old white guys hang out with young Cambodian girls, the stench of it invades your nostrils. It is one route out of poverty, for sure, but one created by economic exploitation levering a chasm of moral and ethical ambiguity amongst impoverished locals. And no-one seems to bat an eyelid.

I still like the place, in spite of all this. It has soul. But I've been speaking to my brother, who was here eight years ago, and it sounds as if that soul might be diminishing in the scramble for dollars. Maybe that's the way all developing cities go if they're left to their own devices.
Posted by Joe at 00:56