In a funny way I have been secretly dreading arriving in Marrakech. I loved Chefchaouen and Meknes. Small, unassuming, quiet towns with few tourists and friendly locals. I found Fes a bit hectic – in your face, crowded and its people hurried and persistent. So Marrakech? A town that has been on the tourist map for so long, where Easy Jet drop four plane loads of suckers a day? The locals resent tourists in these situations. They see them as a commodity to be sucked dry. Who cares what you think of Morocco or Marrakech if you go home with a carpet or two under your arm and a picture of your missus with a rabid monkey on her shoulder? I couldn’t have been more wrong if I had tried.

I took the train down from Rabat on my own, and found myself an empty first class carriage from which to watch the world float by. I thought of Pen and Al’s story from Greece in the 1970s – on a train with some American guy who, after a period of prolonged silence, remarked as they passed shepherds on the hillsides overlooking the tracks; “My, those guys must get awful bored out there.” 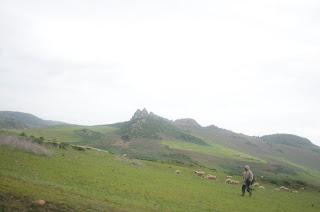 I wasn’t bored for long. At Casablanca the carriage filled up. An English journalist, a Moroccan professor and a little guy that smiled but didn’t speak. I thought of Reggie Perrin and the train to work and smiled to myself. The rest of the trip was fun, a discussion of recent Moroccan history, the reign of Hassan II and the current constitutional state, translated for me from the French. Though my crushing tiredness got the better of me toward the end and I fell asleep in an awkward, crumpled heap. The English girl, Becky, and I arranged to meet up in town and hit the souks later on.

I’m glad I came to Marrakech last of all. I have developed a sense of value over the last couple of weeks. Taking my bags to a petite taxi for the ride into town, I ask how much. Cinquante Dirhams. I laugh and start to turn round. Ok my friend, how much you pay? Confidently then, vingt. A shrug. Vingt-cinq. Done. Still about twice as much as it should be, but that’s half as bad as twice as much again.

My Riad is in a cool spot – central but quiet, and the room is great. I have a quick shower to get rid of the train and head out. People smile. I am alone, and walking with purpose and intent. They’re not trying to sell me things. Weird. Scooters and mopeds hoot and screech everywhere. There are people, lots of people. There are donkey carts, pushbikes, people carrying shit. But there is something else too. Somehow, unbelievably, there is space. The place is busy, but it’s not claustrophobic. And people are asking you if you want to shop with them, but they don’t persist. Why would they bother when another plane load is approaching from around the nearest corner?

After a few hours of ambling about the seemingly endless souks (think endless, then subtract more ends), punctuated by a few purchases and some pretty advanced hardcore bargaining, we decide to get dinner. We head to the ville nouvelle and the Grand Cafe de la Poste. It gets a good write up and is a bit of a star magnet apparently. It certainly looks grand inside. Its prices are grand. And it has far too many waiters, none of whom are quite ever where you want them when you want them. We will have the assorted antipasti. The omens are not good. There are four of them, and we have to choose three. I would suggest that there should either be three or four, and we should get all of them. I can’t help thinking we left the wrong one out. Aubergines are way too salty. Peppers are okay, sardines are great but you wouldn’t have had to break the black pepper budget for the evening to improve them noticeably. Mains come and go unmemorably. I can’t help noticing that Casablanca, Morocco’s premium lager, is pretty gassy, so I graduate to the G and Ts, which has the knock on effect of eradicating much of the next morning.

My new friend Becky had a fear of snakes, so we had to avoid Djemaa el-Fna, Marrakech’s huge central plaza where the charmers hang out. I hadn’t really noticed them the night before, but during my late breakfast on the riad terrace I can hear the oboes rising up above the rooftops. Djemaa el-Fna is an extraordinary place. It is architecturally devoid of any real beauty, though the Koutoubia mosque lords it over a distant corner. It is extraordinary for the crazy scenes that unfold within its boundaries. Stalls selling oranges and dates, snake charmers, monkey carriers, dentists (!), Mauritanian healers, guys selling Berber potions, little bands of drummers and musicians. At sunset the food stalls open up. Out come the benches and people gather round to eat bowls of soup or snails or feast on the kebabs, couscous and tagines. Crowds gather in circles as actors put on small plays recounting traditional stories (featuring transvestite belly dancers apparently). The whole thing is bustling, enchanting, mesmerising and yet totally unintimidating, so long as you’re not frightened of snakes or mopeds, that is. 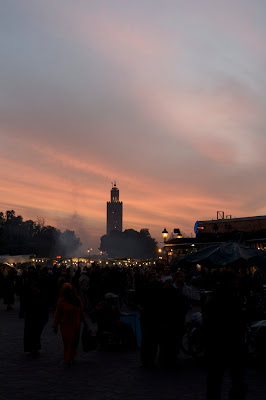 Koutoubia Mosque across Djemaa el-Fna at sunset
Posted by Joe at 10:32