Dar Attajmil, Marrakech, Morocco
I'm sorry. Rabat is nothing like Canberra. Sure the ville nouvelle has wide sweeping avenues and feels “planned” in the same way. That’s because it was. Planned that is. It’s the ville nouvelle.

Canberra doesn’t have a medina. Not one that dates from 17th century at least. Rabat’s medina may be more recent than the others I’ve visited in Morocco, but that makes it more tourist friendly as well. It retains plenty of the intrigue of the others, but is smaller and laid out on a grid, so is hard to get lost in. That detracts slightly from its character, but makes it a good place to start. And with the lack of tourists comes a far more laissez faire approach to shopping, which is most welcome. I’m not convinced it helps you bargain though; nothing will dampen your appetite for a haggle more than really liking the guy.

Another thing Rabat has that Canberra doesn’t is Chellah. The Romans settled above the river just south of town in AD40 on an old Phoenician site before abandoning it in favour of Sale on the opposite bank. Some sultan built on the site in the 14th century, surrounding it with fortified walls that stand proud today. They now guard the ruins of the Roman city and what remains of the Islamic one – the walls and minaret of the mosque being the most intact. 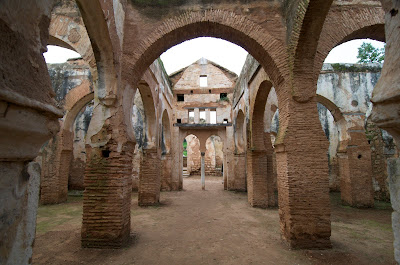 The Islamic remains at Chellah. One of the toughest levels on Goldeneye...

What makes Chellah special is what it conveys of the relationship between man and nature. There are the remnants of great civilisations just about preserved amidst rambling vegetation. Elsewhere gardens are neatly cultivated and paths run between them for the handfuls of tourists who make the pilgrimage here. Best of all though are the storks. Their nests adorn the highest treetops, walls and the minaret. By virtue of their height, number and sheer majesty, they give the impression of maintaining nature’s vigil over this wondrous site where great men, long before them, came and went. 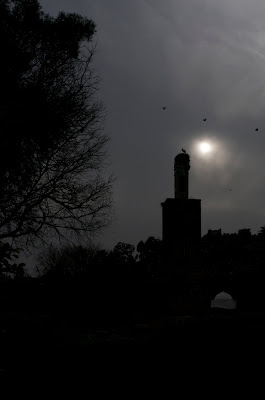 Storks lord it over the eerie site of Chellah

The sense of mankind’s ailing greatness is stronger still at the site of the Hassan Tower. In the 12th century sultan Yacoub al-Mansour began work on what would have been the second largest mosque in the world. When he died in 1199, work stopped on the site with the tower standing at 44m, 16m short of its intended height. An earthquake in 1755 brought the mosque to the ground, and only an eerie field of pillars remains, with the giant folly of the great unfinished tower casting a long shadow over the site. 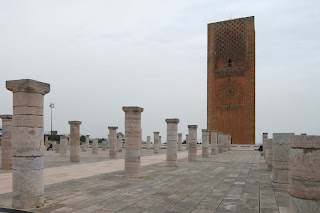 The unfinished Hassan Tower and what remains of the great temple

It’s a strangely quiet and peaceful place in which to escape the insane rush hour and overwhelming traffic fumes that seem the lot of every capital city in the world. Except Canberra, perhaps.