I haven't done much travelling in my life. I've been to plenty of places, but have never really "travelled" in the sense of going from one place to another rather than just heading home each time. I think I will have to get used to leaving places that I like, knowing that in all probability I will never return. Tangier willfully puts itself in that category. Without sounding harsh, it was kind of underwhelming, but I was in need of whelming, so it probably never stood a chance.

Either way, we were out of there and on the midday bus to Chefchaouen. In my ignorance, I had always assumed that Morocco was basically a giant sandpit punctuated by the occasional overcrowded metropolis crammed full of leather jacket and carpet vendors. Although I slept a fair bit on the bus, I saw enough to remind me that probably most of the assumptions that I have based my wild and varied opinions on over the years are probably equally flawed. I didn't expect it to be quite so green, but it is lush and looks very Mediterranean. Which it is. 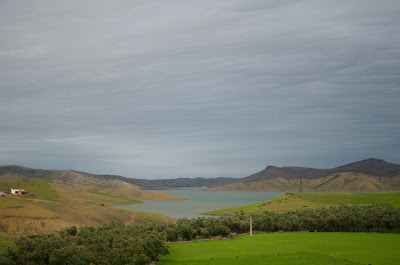 I'd never heard of Chefchaouen until a couple of days ago. It is a small mountain town that has been on the backpacker's map for years by virtue of its infamously good hash. Bit late for me. It's a stunning place. Most of the houses are painted with a blue wash, the streets are narrow and winding and the population almost all wear hooded djellabas that make them look like extras out of Star Wars. 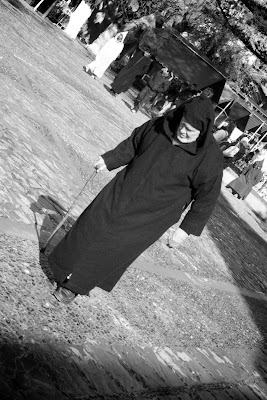 A Chefchaouen resident in his djellabah

It was hot today on the bus down - the sun shone fiercely through the curtain. In my beach strides and t-shirt, I was thinking of snow crippled England with just a hint of smugness. Up on the terrace of our "hotel" watching the sun set behind the mountains and with the town bathing in the last golden hue of the day, we were shocked to realise that it was rather suddenly becoming cold. Bloody cold in fact. I might even go so far as to say that it is fucking freezing.