Ali Baba and the Fawlty Towers

Dar Iman lies snuggled up a narrow laneway just off Talaa Kebira in the heart of Fes el Bali. A discreet door leads you off the street and into a traditional Moroccan Riad carefully restored to its prime. An oasis of tranquility and calm anidst the frantic beating heart of the medina? No. It is Fawlty Towers, alive and well, right here in the middle of the oldest living Islamic city on the planet. 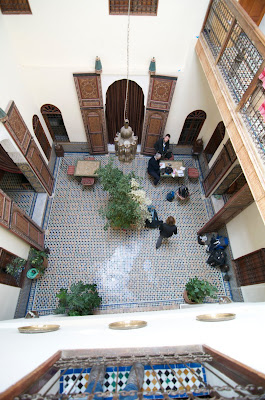 Lovely Riad, shame about the guy running it
Basil is a jumped up little prick called Isham. In his early twenties, he strolls about in his Armani threads sporting a ridiculous pair of sunglasses day and night. He looks like a sort of cross between Rick Astley and Gok Wan. His favourite pastimes, besides talking on the mobile phone that is permanently glued to his ear, are arguing with guests as though they were his bitches, moving people between rooms and generally lying every time he opens his mouth.

Manuel is a guy called Aziz. Very likeable, he has a wonderfully welcoming smile and demeanour that betray a hopelessness of faculty that would be hard to replicate, should anyone be sufficiently deranged as to try. In a farcical scene he offers us back our laundry. It is sodden. We later complain to Basil, who retorts that it's not his fault that it's been raining. Shortly after we are called upon to identify our clothes from a heap containing all the guests in the Riad. Mine and Lindsay's pile of grits has been infiltrated by a pair of black satin panties adorned with sequins, of which we both deny ownership. On reflection, they're probably Isham's.

Throughout this scene Aziz is helpfully grinning from ear to ear and inadvertently doing a perfect impression of Richard Prior in See No Evil, Hear No Evil. He keeps this pose up throughout mine and Lindsay's row with Isham, which severely tests the limits of my temper. If my hands hadn't been trapped inside the misaligned pockets of my djellabah, I may have even shaken a fist in despair.
Posted by Joe at 11:43