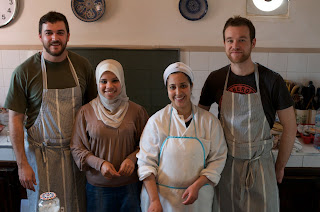 It’s my last day in Morocco today. It’s been an incredible experience but it hasn’t exactly lived up to its billing as a gastronomic adventure. Linds and I try to remedy this by taking another cooking class at Dar Attajmil, and making Chicken Pastilla. We kick off in the market with Loubna, a lovely girl who is going to translate for us as the cook doesn't speak English. The market is nowhere near as crazy as the one we went to in Fes, so this is a relatively simple task. We get chicken, almonds, cinnamon and lots of vegetables for the Moroccan salads that will form our starter.

There’s not really a lot of hands on stuff involved in these lessons – it’s more like an intimate demo. Pumpkin goes in a pan to boil for an hour before being drained and shredded with sugar and cinnamon. It is great. Toasted sesame seeds and a bit of honey would make it very similar to what we had back in Tangier on the first night. The aubergine is diced and deep fried, and then has the excess oil strained from it before being cooked with grated tomatoes, garlic, parsley, coriander, paprika, cumin and salt. 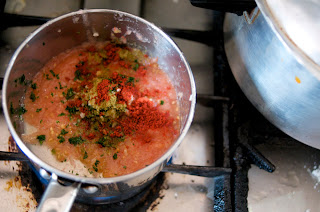 Green peppers are roasted over the flame, skinned, chopped and added to a similar tomato base, though the tomatoes are skinned and seeded in this one. Meanwhile we boil quartered fennel bulbs before dressing them with lemon juice, oil, parsley and coriander. They have a fairly mild flavour and with the dressing are incredibly delicate and sit nicely alongside the richer tomato salads and the sweet pumpkin.

For the pastille we blanch and skin a shitload of almonds before deep frying them. Meanwhile the chicken (we are using three jointed breasts with the wings and carcass attached) is cooking in a pan with onion, vegetable oil, turmeric, saffron, parsley, coriander, salt and pepper. After fifteen minutes or so a couple of cups of water are added, and forty minutes later a couple of tablespoons of sugar go in. When the chicken is cooked it is removed, and four eggs go in the pan and are kind of semi scrambled along with the other cooking juices. This egg base is then removed and the excess liquid squeezed from it in a sieve. 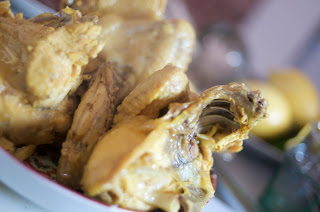 We stand around shredding the chicken breasts (painstaking – anyone remember the Vietnamese salad from Ballymaloe?) while the almonds are ground with sugar and cinnamon. To assemble the pastillas we use a strange pastry, similar to filo but slightly thicker and oiled to prevent it sticking. A layer of chicken is topped with the egg mix then almonds, and the pastry tucked up to form the parcel, before being turned over and wrapped in one more layer, more neatly this time. Linds and I wrap a few – they might not be prize winning efforts but they do improve. They are fried and decorated with icing sugar and cinnamon. 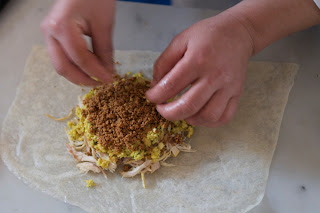 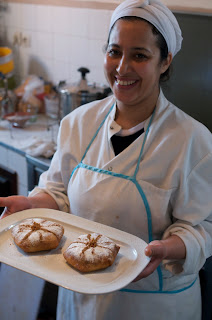 We also make a Moroccan flat bread using a mix of extremely fine maize and white flour. The dough is fairly firm and is kneaded gently in a flat terracotta bowl with shallow sides. Brought into rolls it is rested then stretched and pressed into a circle with flattened fingers. I do one to try and get the feel for it, though the girls are laughing at my attempt. I immediately text my mum and ask her to refresh my starter so I can start baking as soon as I get home. 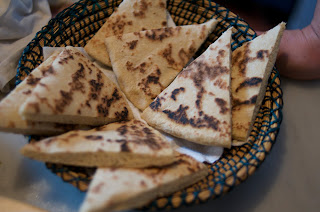 We sit down to eat on the terrace at around half two, and tuck in to a delicious meal. These are definitely things I will cook again, if I can decipher my scribbled notes. We didn’t make dessert, but I wish we had. It's basically a brownie I guess, but far more than the sum of its parts. If I can extract even a semblance of a recipe for it before my plane leaves tomorrow, then the trip will not have been in vain.