Riad Laaroussa, Fes, Morocco
We had planned to take a cooking class in Fes with some guy called Lahcen, but it turns out he is sunning himself on Bondi beach. We find an alternative though, in the form of Samira and Fatima, the cooks at Riad Laaroussa, slap bang in the middle of the medina. Riad Laaroussa is basically what Dar Iman wishes it was and probably could be were it not so hopelessly managed.

Our day begins by heading to the market with Samira. We have asked to make a few salads to start, followed by lamb tagine with caramelised quince, which we had eaten at Riad Tanja in Tangier. We pick up a leg of lamb which is tiny, only three months old. The butcher uses a band saw to cut it up. Being with Samira as she shops is great, as we get to photograph and talk to the stall holders in a way we wouldn't be able to without her. 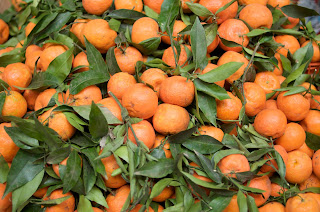 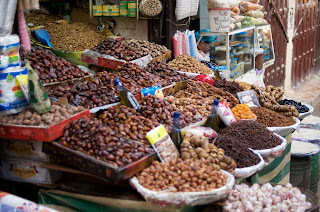 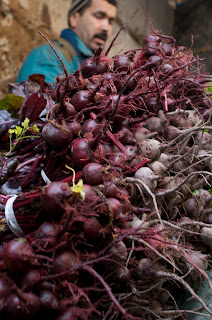 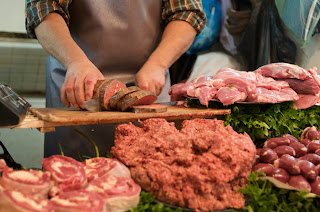 Plenty of butchers too. This guy is slicing some traditional sausage. It was ok. Just ok. 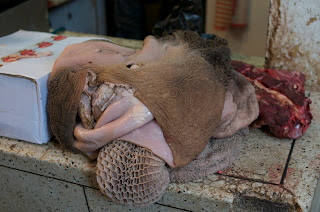 Er, anyone for some organs?
We also stick our noses in at a baker. All over town they sell these round flat breads. The wholemeal version has an unbelievable flavour. They don't add any sugar, or so these guys say. Just the basics, as bread should be, but seldom is. In Britain anyway. 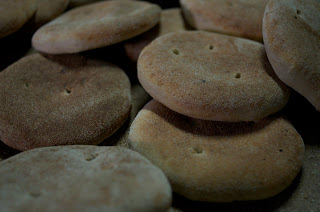 These flat breads are everywhere and are awesome
Back at Laaroussa we head for the kitchen. Fatima has got the staff lunch underway - a pressure cooker is on the stove, containing cardoon. I can't say I've ever come across this stuff before, but it is the stalk of the globe artichoke, a bit like celery. It is everywhere in the markets out here. Joining it in the pressure cooker is a cup or two of water, olive oil, saffron, ginger, preserved lemons and salt. Some lamb from the market goes in, and later potatoes, for the last ten minutes or so. Meanwhile finely chopped caramelised onions are cooked with tomatoes, garlic, green peppers, saffron, black pepperolive oil and parsley to make a sauce for the long grain rice they will eat with the lamb and vegetable stew. All the girls who work in the Riad slowly fill up the kitchen and they sit around laughing and chatting before Samira sits down with them and they all eat together. 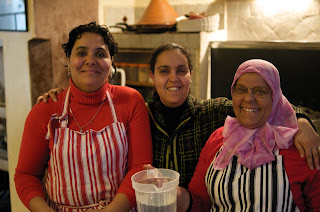 The ladies of Riad Laaroussa
On the stove, chopped tomatoes are reducing with garlic, cumin, paprika, chilli, salt, vegetable and olive oil and plenty of coriander. We have cooked aubergines directly on the flame to give them that wonderfully deep smoky flavour and they are cooking through in their own heat in a plastic bag. These two elements are eventually combined to form one of our starters, and it is incredible. The rich spiciness of the tomato goes toe to toe with the smokiness of the aubergine, neither of them quite coming out on top, with a delicate but deeply flavoursome balance ensuing.

The lamb tagine meanwhile, is cooking away. In a pressure cooker. Now I always though that pressure cookers were an invention of the 1970s used for nuking vegetables on a Sunday morning. I also thought that a tagine was the name of a cooking pot with a pointy lid, in which tagines were cooked. I was wrong. Tagines are cooked in pressure cookers and served in tagines. Well, these ones are anyway. We learn something new every day.

The lamb is in there with onions, garlic, ginger, saffron and salt. After two hours in there the lamb comes out and we add sugar and cinnamon. In another pressure cooker our quince is cooking. When it is halfway there a load of sugar goes in and it is kind of poached in syrup basically. It will be rolled in toasted sesame seeds and served on top of the tagine.

Dessert is milk pastilla. I help Fatima lake the filling; milk, couple of egg yolks, sugar and cornflour. A lot of cornflour. Luckily there is enough sugar to overpower the flouriness, but I will never be able to exorcise from my mind the spectre of all that cornflour when I finally get to eat this in a few hours time. We take turns to fry the little round of filo that will eventually constitite the dish.

The whole experience is great. Samira is an incredible woman who works hard in the kitchen all day then goes home to feed a family of five. Through her cooking and the demonstrations she is opening up a brave new world and enjoying every minute of it. She keeps a blog now and posts her recipes in both French and English.

I may have to beg my mother's forgiveness and dust off the pressure cooker when I return, briefly, to England at the end of this trip. The flight home is booked and I have one week left in Morocco.
Posted by Joe at 12:09