Meknes to Rabat, Morocco
Morocco has always been a bit of a tagine of tribes and cultures. When the Romans arrived in the fourth century BC, they named the locals Berbers, or barbarians. Berbers are immensely proud of their heritage and traditions and consider themselves to be the real Moroccans. Chefchaouen, high up in the Rif mountains, is Berber country. Fes, further south, has Andalucian and Arabic influences. West of Fes lies Meknes, one of the four Imperial Cities, much overlooked by tourists. The Berbers settled here in the tenth century.

You know that felling you get when you arrive somewhere for the first time? I love Meknes.

The decision to leave Fes early was taken in the morning. By the time we had our shit together and had negotiated a Grande Taxi to take us to Meknes (a hopeless endeavour – four bag laden tourists under the glare of a harsh, beating sun, standing in the middle of a unionised taxi rank don’t have a great deal of leverage when it comes to negotiation) it was getting on. We wander through narrow streets in pursuit of our Riad, whilst some irritating guy attempts to inveigle his way into our affections by showing us the way. We ignore him repeatedly but he is apparently upset when we eventually tell him to get stuffed at the door. Despite his attentions, everyone else looks and seems friendly. There is a sense of calm and a slowness of movement badly lacking in Fes. These people are on Morocco time. Insha’Allah: if God wills. Why waste time and energy rushing when He is on your side.

We check into a beautiful Riad. No-one here speaks English so I can try out my GCSE French. The locals speak a Moroccan dialect that doesn’t always correspond with Lindsay’s traditional version, so Al, with his sufficient (sometimes ponderous, always somehow hilarious) French, is our chief spokesperson. Linds and I have another twin room and for the second city in a row I lose the game of backgammon to determine beds. It is getting late in the afternoon before we finally make it out to explore.

After winding our way around the narrow streets that surround our hotel (some of the doorways are just giant holes smashed through the walls) we are in the town proper. The medina itself is quite tricky to demarcate, but a bustling street, complete with traffic, seems to form one border. The guys sit thoughtfully sipping their mint teas in pavement cafes, while the women stroll about, somehow more liberated and relaxed than elsewhere. And far, far more beautiful. 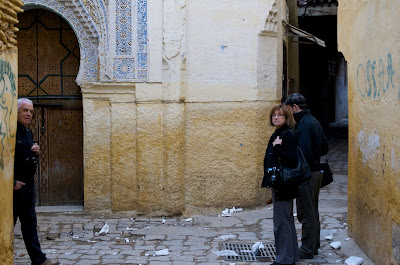 Pen, Al and Lindsay loiter in the medina

We head for Place el-Hedim, the apparent epicentre of Meknes life. We are in luck. It is around half five and, with the sun heading back from whence it came, the square is alive with people. From above it would constitute quite a sight; giant fortified walls run down one side, cafes line the other and in between, rings of people surround performers, salesmen and entertainers. There are very few tourists. The first guy we go to see, well, we can’t work out what the hell is going on. My best guess is that he is some sort of magician turning dates into pigeons, but that seems pretty unlikely. Next up we watch a guy doing acrobatics who has drawn a big crowd. He spots us and singles us out for some ‘American’ jokes. 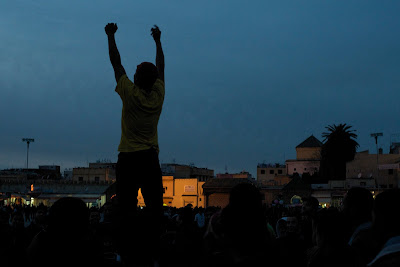 The acrobat takes the crowd's applause

Next up is a ring of guys with fishing rods. What initially looks like some bizarre ritual turns out to be a fairground contest to land a small ring on the top of a kia-ora bottle. We have a go, without success. The overwhelming sense is of a place and people at peace with the world. We feel welcome and are never hassled; more a novelty than an opportunity. We decamp to la ville nouvelle where I battled with the French keyboard on my last couple of posts and sank a couple of beers in the Hotel de Nice. And it was.