Meknes - Rabat train, Morocco
Chefchaouen may have been a hard act to follow but I had high hopes for Fes, despite my initial hesitation. Most of the guide books recommend hiring a local guide to navigate you around the unfeasible labyrinth that is the medina. We decide that it can’t be that hard and set off with the Lonely Planet’s brave but ultimately inadequate map as our guide.

The medina of Fes el-Bali is the largest urban area in the world from which motorised traffic is prohibited. As a prototype for the world’s major cities to replicate, it comes up pretty short. Overworked donkeys and ramshackle carts replace the car, ferrying fruit and veg, rugs, cement, hides, you name it, all around town. They contribute to the general sense of disarray that engages you wherever you go in the medina. 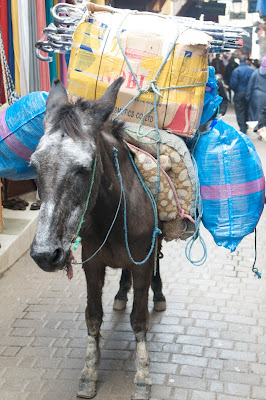 A donkey transports a load of umbrellas across town
Some areas are different from others. The giant ‘Blue Gate’ or Bab Bou Jeloud greets most visitors to the city. Immediately beyond its welcoming arch lurk a persistent band of mercenaries who are more than willing to point you in the right direction. The right direction for them at least. This is to be expected in Morocco. In Chefchaouen it is done with humour and good grace. In Fes it felt a little more intrusive and parasitic. The closer one ventures to Place as-Seffarine, the more intensified it becomes.

Al gets suckered by a guy offering to direct us to a place with panoramic views from which to use the cameras that dangle conspicuously around our necks. A few twists and turns later, a couple of doorways and a lot of stairs and we do indeed command a spectacular view of the city. From the roof of his carpet shop. Al points out that he doesn’t want a carpet, and that if this guy can sell him one then he’s some salesman. Mohammed senses this and settles for a 20 dirham tip before moving on to his next target. 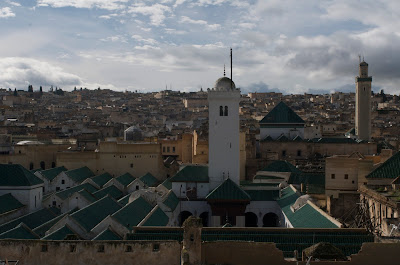 The view from the roof of Mohammed's carpet shop
As you walk around you find yourself moving from one district to another. The putrid smell of the tanneries heralds their domain. The constant banging of hammers signals the metalworking area. Elsewhere street hawkers try and flog you shoes, belts, bags, carpets, fabrics, kaftans, tissues, oranges, metalwork, door knockers, plates, tagines, lanterns. Most are polite and choose not to pursue you. The bumsters trying to get you in their restaurants are the worst, and short of a sharp fuck off can be tricky to lose. 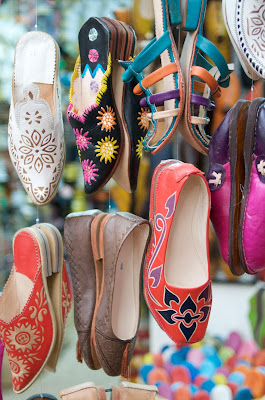 Shoes anyone?
We climb up through a nice little street market, stopping for a kebab in what would come close in a search for the world’s smallest restaurant. Once we have succeeded, through a combination of Al’s Franglais and Linds’s traditional Arabic, to persuade the apprentice grillman to stick our koftas back on the grill to cook them properly, we eat up and head on our way. Further up the hill we wander through more local streets. Small shops of craftsmen turning lathes and inlaying metal, donkeys carrying bags of cement for the night’s work. It feels more like the Fes I had hoped for. 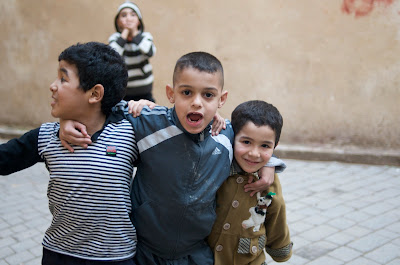 The kid at the back's sheep impression was good enough to earn 5 dirhams for him and his mates
It’s not all bad though, and most of the people still display the warm Moroccan hospitality. We take a worn turn somewhere and are studying the map. A young guy wanders up and asks in French if he can help. He points us in the right direction, smiles and offers us all a date from his bag. A ma’ salaama and we are on our way. At the top of the hill the view beats Mohammed’s carpet shop hands down and we ponder it for a while as the sun sets and we wonder how the hell we are going to find our way back.

In the evening Linds and I overrule Al and we seek out a restaurant well off the beaten track, lured by the promise of swordfish with pomegranate. We’re on the right tracks when we are faced with two tournez a gauches, either of which could be the one we need. We ask someone. He asks someone else. He tells us to follow him. We do. He takes the second turning. We follow him on a zigzag path of lefts and rights through narrow doorways and passages for a good half mile. He asks us to wait. He goes into a door. His son comes out. His son is five years old. We follow him. It must make quite a sight, this tiny little kid swaggering his way around town obediently followed by us four. We tip him a few dirhams at the door. We knock. Er, pardon messieurs, mais, le chef, ee az left. Bollocks. We trudge back what must be the right way and within a hundred yards we arrive back at the two left turns. 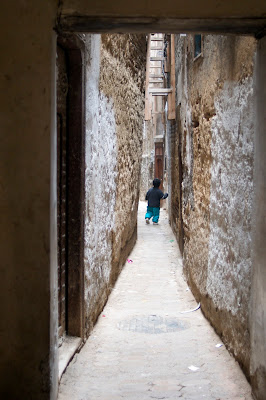 An unofficial guide to the medina of Fes
Eventually we settle down to eat at Medina Cafe, a tiny little joint just beyond Bab Bou Jeloud. The kitchen looks like it belongs in a tower block bedsit and we are the only people in. The waiter/chef/owner is wearing his coat and appears to have resolved to speak as infrequently as possible for 2010. He smiles occasionally, enough to let us know we are welcome, and turns out some pretty neat food. I have a tagine of chicken with preserved lemons and olives. It comes with a sweet onion jam like sauce. To be honest, after all that walking, I’d probably eat anything, but this is moist and succulent and it doesn’t touch the sides.

Fes is meant to be the new Marrakech, and this apparently amuses the Fassis. As the Lonely Planet points out, this is “an old and supremely self-confident city that has nothing to prove to anyone.” But you know what, it does. It is a beautiful place, for sure. But it is decaying too, and it can’t afford to be complacent as it tries to reinforce and preserve what has made it great. But the real selling point of Morocco is its people, and in Fes, they’re just not quite as welcoming as elsewhere, no matter how stunning the view from their carpet shop rooves.
Posted by Joe at 14:42