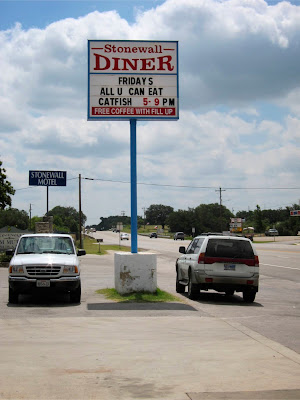 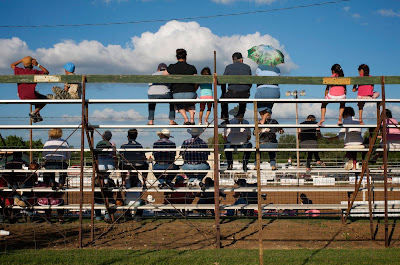 The crowd awaits the main event
I turn up half way through the Mutton Bustin' - any kid under 70lb can rock up and see how long they can stay on the back of a sheep. What ensues is pretty funny, tiny little kids clinging on for dear life. Somehow I can't see the Health and Safety Executive allowing these kind of antics at your standard British village fête. Whoever stays on the longest wins a pair of cowboy boots. Most don't need them it would seem - there are a lot of little cowboys kicking around the place. 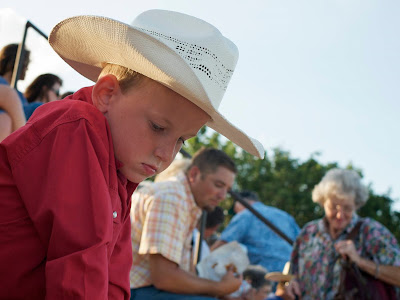 While the flags are ridden out they play Johnny Cash's Ragged Old Flag to the standing crowd. The undercurrent of pride and patriotism is gripping, though not a word or face betrays it. Why is this kind of display treated with such suspicion and disgust in England? Why, as a nation, are the English unable to face up to their past, accept the things that were wrong, applaud the things that were right, and embrace the essence of what it means to be English? Perhaps it is because it doesn't mean anything any more. That the lack of any cohesive identity means we forget what we stand for. Aside from drinking cups of tea and losing penalty shoot outs, of course. 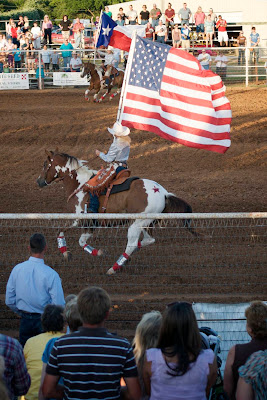 Flag waving
Right now, back home, the country is no doubt deeply immersed in its quadrennial bout of flag waving. How curious it is that the only time as a nation we should engage in such activity is when a group of cashed up chavs step forth onto the world stage to 'represent' us. Standing on the steps with Americans - a nation of nations if ever there were one - and feeling the depth of their pride was enough to make me feel slightly ashamed of our awkwardness.

That's not to say that this pride can't be misplaced, as the George Bush impersonator behind the mic kept banging on about troops and armed forces and God, and the 'clown' in the middle made so many Brokeback Mountain jokes that he must surely be a bit of an Ennis himself. He even managed to drop in the odd Mexican gag too, despite the fact that the crowd was about half Mexican and he probably ate tacos for breakfast, but hey. 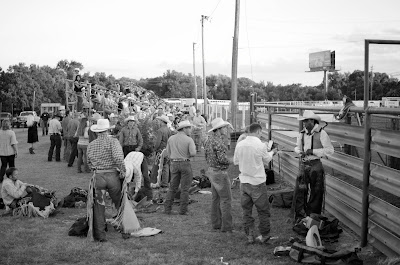 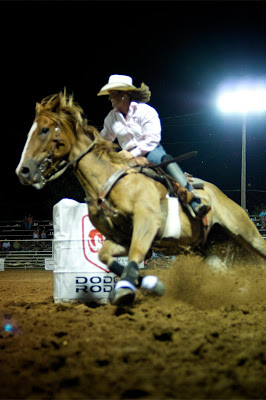 Barrel racing
I got chatting to the girl next to me who told me her husband was a bare back rider. Right on cue, he was introduced as some all conquering cowboy champion, then came out and proceeded to cling to the back of his crazed horse for about ten minutes, in what, even to a layman like me, was quite obviously the outstanding nut-busting performance of the night. I'd get involved myself, I assured her, but I can't bring myself to wear the chaps. 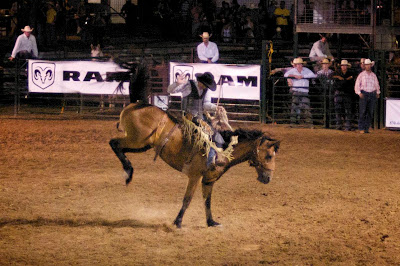 All-Texas Chaps wearing Championships
Once all the fun and games were over, they let wild horses run around the arena. Cue the gushing movie soundtrack music and G Dubya started telling everyone how wild horses represent everything that makes America great - Freedom. Freedom that we owe to our troops. And to God. And Cowboys. And so on. It all begins to get a little too much for me.

I can see his point and all, but I'm sure he doesn't have to labour over it quite so much. Maybe there is something crass about this kind of collective outpouring. Why do we need anthems and flags and symbolism to hold us together as people? Maybe the English are pioneers of modern nation state patriotism, by just not caring for it at all? I mull this question over in my mind for a few moments, before deciding that I cannot possibly address the full range of its consequences without a cup of tea, and head gracefully home to pop the kettle on and ponder the meaning of it all.

I walked through a county courthouse square
On a park bench, an old man was sittin' there.
I said, "Your old court house is kinda run down,
He said, "Naw, it'll do for our little town".
I said, "Your old flag pole is leaned a little bit,
And that's a ragged old flag you got hangin' on it".
He said, "Have a seat", and I sat down,
"Is this the first time you've been to our little town"
I said, "I think it is"
He said "I don't like to brag, but we're kinda proud of
That Ragged Old Flag

"You see, we got a little hole in that flag there,
When Washington took it across the Delaware.
and It got powder burned the night Francis Scott Key sat watching it,
writing "Say Can You See"
It got a rip in New Orleans, with Packingham and Jackson
tugging at its seams.
and It almost fell at the Alamo
beside the Texas flag,
But she waved on though.
She got cut with a sword at Chancellorsville,
And she got cut again at Shiloh Hill.
There was Robert E. Lee and Beauregard and Bragg,
And the south wind blew hard on
That Ragged Old Flag

"On Flanders Field in World War I,
She got a big hole from a Bertha Gun,
She turned blood red in World War II
She hung limp, and low, a time or two,
She was in Korea, Vietnam, She went where she was sent
by her Uncle Sam.
She waved from our ships upon the briny foam
and now they've about quit wavin' back here at home
in her own good land here She's been abused,
She's been burned, dishonored, denied an' refused,
And the government for which she stands
Has been scandalized throughout out the land.
And she's getting thread bare, and she's wearin' thin,
But she's in good shape, for the shape she's in.
Cause she's been through the fire before
and I believe she can take a whole lot more.

"So we raise her up every morning
And we bring her down slow every night,
We don't let her touch the ground,
And we fold her up right.
On second thought
I do like to brag
Cause I'm mighty proud of
That Ragged Old Flag"