Airports are God-awful places when you think about it. And when you’re in one at 5.30am, with two hours to count out of your life before you get to leave, there’s precious little else to do. Mechanically sipping down a Starbucks coffee and picking my way through a blueberry muffin the only thing to look at is the queue for McDonalds. The supersized line up like a row of butchered carcasses on their way to be hosed down for those last juicy bits of 100% Aberdeen Angus that make up their breakfast burgers. All that’s missing are the meat hooks.

I soon snap out of this somewhat delirious state and, since I’m flying out of Houston, spare a few minutes to think about the country I’m about to leave behind. Texas is the only state in the USA whose flag may fly level with Old Glory and, should it wish, may cede from the Union at any time. It certainly feels like its own country. The first thing I saw when I walked in the Hoity Toit beer joint, my first night in Texas, was this sign; 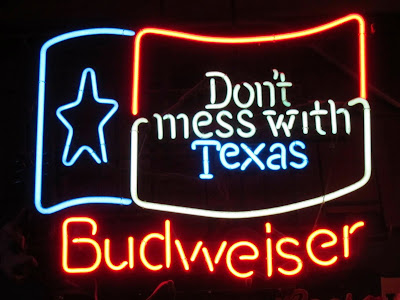 It didn't mean a whole lot to me then - just a swaggering, arrogant sign on a pub wall. But it's a far deeper sentiment that covers a lot of ground. It says that we like things the way they are round here, it's a nice place, and we want it to stay that way. And I can't find fault with that. 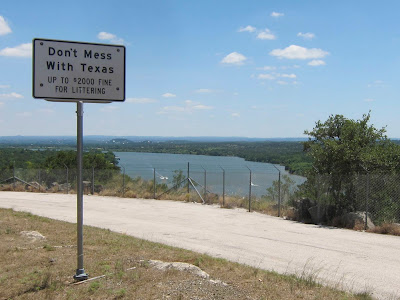 You might not think of Texas as being a particularly scenic state, and on the whole you’d be right. The Hill country isn’t really that hilly - it’s more a question of an obvious contrast. Looping into Austin on the freeway it is obvious - dead flat on one side, gently rolling downs on the other. A little further north is lake country, and stunning scenery abounds.

Driving through it, you need the radio on. Naturally, they like both types of music down here - country and western. Now I like a bit of country music, but after 1600 odd miles, it can get a bit much. If you’re even remotely depressed, or worse still lovesick, you might find yourself pulling over at the next bridge. Luckily there are a few numbers that buck this trend - every time Devil went down to Georgia comes on the volume goes up and I start my Wayne’s World impression. Best of all though is I’m Still a Guy by Brad Paisley, a lyrical muse on declining masculinity in the modern age;

With all of these men lining up to get neutered
It's hip now to be feminized
I don't highlight my hair
I've still got a pair
Yeah honey, I'm still a guy
Oh my eyebrows ain't plucked
There's a gun in my truck
Oh thank God, I'm still a guy

To keep myself going on the road, I’ve chewed through the best peppery jerky on earth. Forget Jack Links - gas stations out in the countryside nearly all have a local variety on the counter. Out near Stonewall, where they grow peaches, stalls line the highways, and sell the sweetest, juiciest fruit imaginable. You literally have to lick your arms clean afterwards, which makes driving difficult.

From a culinary perspective, Texas is as close to Mexico as you can get. Taco joints grace every corner. Aside from this, they eat a lot of barbecue. That word that means different things in different places. In Texas it means beef, pork, chicken or turkey slowly smoked over mesquite, dowsed in sauce and washed down more often than not with sweet iced tea. It was the first and last meal I had in Texas, and when it’s good - like at Willard’s in San Antonio, Granzin in New Braunfels or Janak’s just outside of Worthing (!) - it is really good.

Texan wine is in the ascendency - the Hill Country is chock full of vineyards, but the beer is something very special. Small, local microbreweries create all kinds of hoppy delights. The most famous is probably Shiner - they brew their famous Bock, a stout, hefeweizen, smoked beer, pilsner, blonde and all kinds of seasonal ales. Favourite for me has to be Southern Star brewery’s Bombshell Blonde though - a creamy golden ale that hits the spot every time. 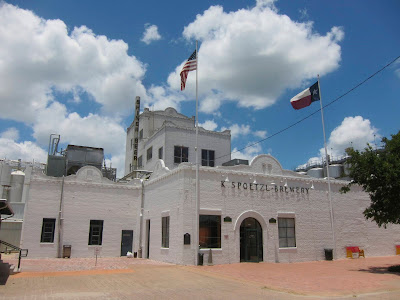 Spoetzl Brewery - Shiner, Texas
But what makes Texas great isn’t peaches or beer or hills or music. It’s Texans. It’s what they offer you, and what you find at every turn; warmth and hospitality. They hear the accent, ask where you're from, and give you a heartfelt Welcome to Texas. They say sir and ma'am. All the time. Walking down Main Street in Fredericksburg after dark, the shops are all shut for the night, but their wares still line the pavements. The contrast with the typical view of America as a gun-toting lawless society devoid of any kind of moral compass could not be starker. Even in bigger towns, like New Braunfels, things go pretty smoothly. People leave their cars unlocked, stuff out on their porches. There’s a trust, and it runs so deep that it pretty much goes unnoticed. 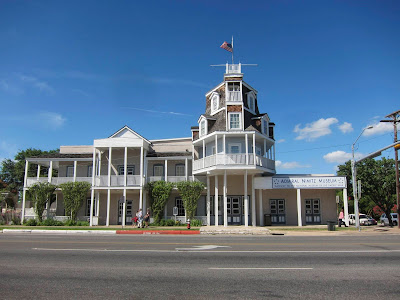 Pacific War Museum - Fredericksburg, Texas
To enjoy it, you must first adjust to the heat. And then, every time you leave an air-conditioned space for the outside world, you have to adjust again. Even after three weeks, opening that car door feels like sticking my head in a tumble dryer on perma press. I don’t think I’ll ever get used to it. The phrase as hot as Texas has entered my newly burgeoning lexicon (together with this ain't my first rodeo). 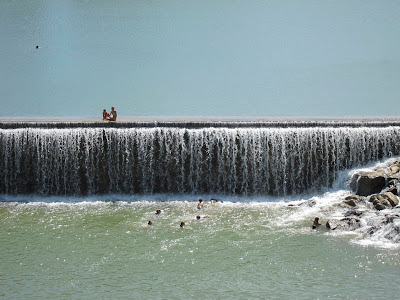 Kids cooling off in the river - Llano, Texas

Driving back towards Houston yesterday, I watched a storm heading over from the west. The bruised sky reminded me of the drive out to New Braunfels on my first day in Texas. How often things return to reference themselves; how commonly do they loop back toward their beginnings and the open ends hitch seamlessly together. I come and then I go, and mother nature, or God, if you want to call her that, counts me in and out. It is time to move on once more, and not for the first time, I am torn by not wanting to leave, and knowing that I must. I can do so in peace, since I know I never messed with Texas. Quite the opposite in fact - I have a suspicion that it may have messed with me. 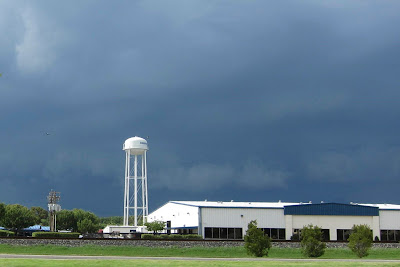