Given that the city flies under the above banner I should have been prepared for anything. My friend Janell and I hired bikes for the day to ride around the city, and the first thing I saw was a man pushing his bicycle along the sidewalk, wearing only a thong. A thong and a thin smile of broad contentment that presumably only a well aired pair of buttocks will bring to the face. Weird indeed.

We rode out through the park and alongside the natural springs that flow through the south part of the city. After the searing heat had reduced our clothes to sodden rags, we swapped them for swimmers and took a dip. Hot out of the water, bloody cold in. Kids, dogs and weirdos splashing about to their hearts' content. 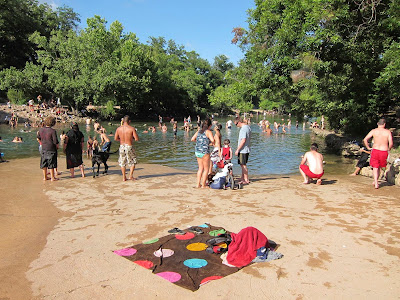 Barton Springs, Austin, Texas
Having cooled off and dried off we headed downtown and rewarded ourselves with a cold beer. Austin really reminds me of Melbourne - the skyline, the rooftop bars, the water. And that laid back easy feeling that only comes when a city is effortlessly cool, knows it, but chooses not to brag. And that slight niggling feeling that I could probably quite happily live here. 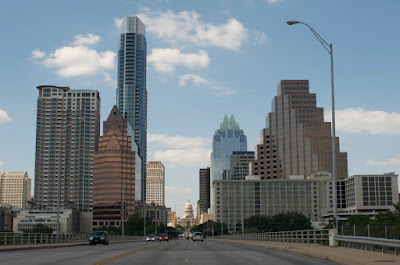 Could have middled it but didn't want to die
On Sunday I indulge in a photowalk. It's Father's Day, so the place feels rather empty. It is excruciatingly hot, and downtown is filled exclusively with bizarre looking winos. I think about wetting myself and drawing tattoos all over my face with a biro in order to blend in, but eventually opt to just secrete a few gallons through my pores instead. In spite of the giant sweat patches, or perhaps because of them, everyone I meet smiles and says hello. 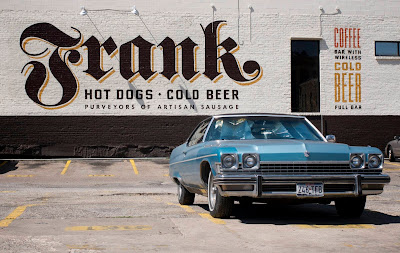 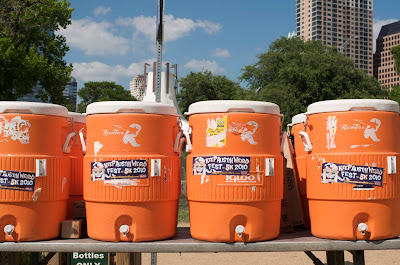 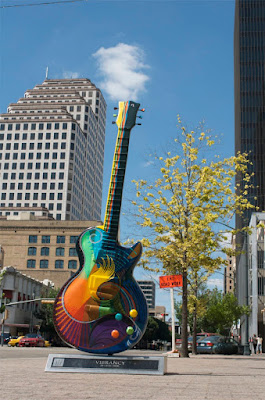 If you believe what they tell you (which I usually do, depending upon who they are) then Austin is the live music capital of the world. Everywhere you turn someone is strapping on a gui-tar and getting on down. Sunday night we took in some blues on Sixth Street, an endless sprawl of music venues. The band were awesome. Ol' JT Coldfire (he had his name written along the frets) was a machine and the closing number, a medley of Folsom Prison Blues and his own version of the Texan anthem was a suitably rousing, foot stamping finale. He also gave me some stick for drinking Lone Star, which raised him considerably in my estimation. 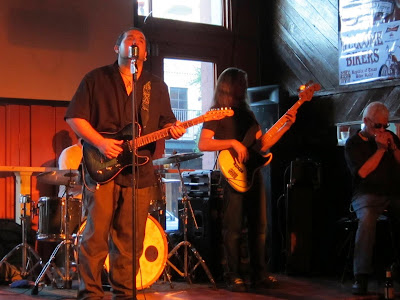 JT Coldfire and the boys
So yeah, Austin is a just a little bit crazy. And there's live music within earshot wherever you are. And there is that glorious feeling once again - a place, and the people in it, just happy, content. Smiling that buttock baring smile of cheerful tranquility to which we mere mortals can only aspire. Or just de-robe and move to Austin - every other nut job in Texas has... 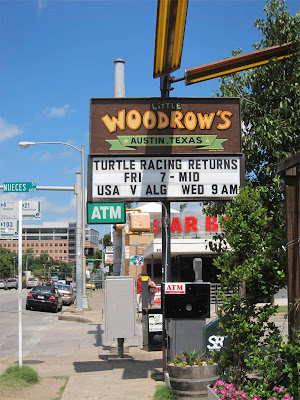 Weirdness sprinkled all over town
Posted by Joe at 19:43