With ceremony, a wide silver dish of crabs, big ones, their shells and claws broken, was placed in the middle of the table. A silver sauceboat brimming with melted butter and a long rack of toast was put beside each of their plates. The tankards of champagne frothed pink. Finally, with an oily smirk, the head waiter came behind their chairs and, in turn, tied round their necks long white silken bibs that reached down to the lap.

Bond was reminded of Charles Laughton playing Henry VIII, but neither Mr. Du Pont nor the neighboring diners seemed surprised at the hoggish display. Mr. Du Pont, with a gleeful "Every man for himself," raked several hunks of crab on to his plate, doused them liberally in melted butter and dug in. Bond followed suit and proceeded to eat, or rather devour, the most delicious meal he had had in his life.

The meat of the stone crabs was the tenderest, sweetest shellfish he had ever tasted. It was perfectly set off by the dry toast and slightly burned taste of the melted butter. The champagne seemed to have the faintest scent of strawberries. It was ice cold. After each helping of crab, the champagne cleaned the palate for the next. They ate steadily and with absorption and hardly exchanged a word until the dish was cleared.

With a slight belch, Mr. Du Pont for the last time wiped butter off his chin with his silken bib and sat back. His face was flushed. He looked proudly at Bond. He said reverently, "Mr. Bond, I doubt if anywhere in the world a man has eaten as good a dinner as that tonight. What do you say?"

Goldfinger - Ian Fleming
The setting for this feast was “Bills on the Beach” - in fact a place called Joe’s Stone Crab, on the southernmost point of Miami Beach. Naturally, I had every intention of recreating the experience for myself. Equally naturally, things didn’t quite pan out that way. Stone Crabs are out of season from May 15th, so there goes that one. And sitting on my own drinking a large vodka martini and ordering a tankard of pink champagne from my genial waitress who has worked at Joe’s for sixteen years would have simply marked me out as a twat.

I settle for a large vodka and tonic, a pound and a half of steamed king crab claws and the driest Sauvignon Blanc on the menu. Not without ceremony, the claws arrive on their plate, and clarified butter is poured into a dish. No-one ties a silken bib around my neck, though it would have been a nice touch if they had. 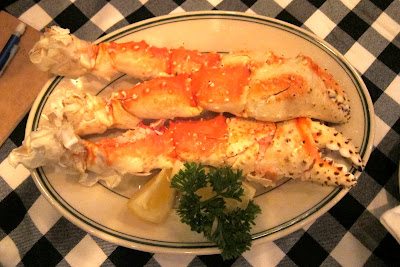 The meat is incredibly sweet and tender. I begin eating it unadorned, but occasionally furnish with a little melted butter. It has a rich, intense nutty caramel taste, almost enough to make me think they infuse it with something. But no, they keep it piping hot in huge jugs in the kitchen, so it is gently toasted a little more the longer it sits. Were the meat itself not so delicious, I would have been pouring the stuff all over the place.

I have ruminated on the splendour of the crab before. That such magnificent, prehistoric creatures should yield such sweet meat is one of the wonders of nature. And that the very tip of the claw, the deadliest, most brutal part of the beast’s anatomy, contains the sweetest flesh of any animal on the planet, the greatest of them all. 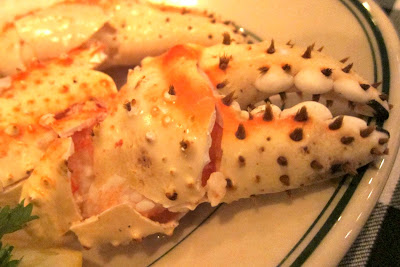 Miami is a town of gross decadence and overindulgence. Sodom and Gomorrah. Cashed up city boys smoking cigars in the pool. $250 bottles of vodka. Tanned skin sizzling under the Florida sun. Miami is like a B-list celebrity who has seen better days - propped up by botox and silicone and layered in make up. Walk past her on the street and she might look youthful and vibrant. But any more than a cursory glance and you'll realise that someone's just papered over the cracks.

It is pretty nauseating really, but exactly what I expected and in a strange way hoped for. Ian Fleming knew what I meant. Which makes me kind of glad I didn’t have to wipe melted butter from my chin with a silken bib.

Bond thought, I asked for the easy life, the rich life. How do I like it? How do I like eating like a pig and hearing remarks like that? Suddenly the idea of ever having another meal like this…revolted him. He felt momentarily ashamed of his disgust. He had asked and it had been given. He had made his wish and the wish had not only been granted, it had been stuffed down his throat. Bond said, ‘I don’t know about that, but it was certainly very good.’