In amongst the shopping malls and Tex Mex restaurants of downtown San Antonio, I can't help but checking out The Alamo. There's not a lot left now obviously, but the old chapel still stands as a shrine in memory of those that died here. It is overrun with fat people, and doesn't feel especially shrine like to me, although the sign on the door touches me, most people inside fail to heed its call. 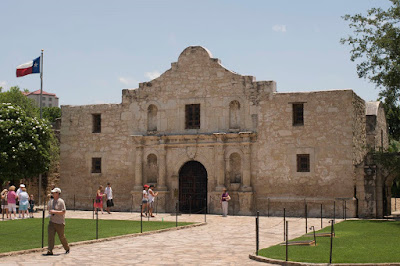 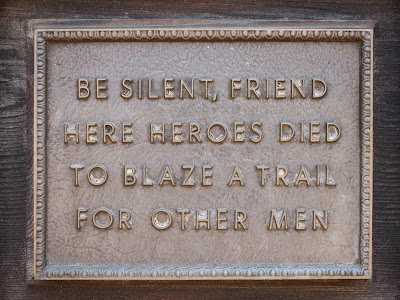 Maybe it's just the contrast with the crippling humidity outside, but an eerie chill runs through the little museum. What the hell must it have been like to just stand there and fight, knowing you were going to die, but doing it for what you believed in. On the second day of the siege, Travis, the commanding officer, sent the following despatch:


To the People of Texas & All Americans in the World

I am besieged, by a thousand or more of the Mexicans under Santa Anna. I have sustained a continual bombardment & cannonade for 24 hours & have not lost a man. The enemy has demanded a surrender at discretion, otherwise the garrison are to be put to the sword if the fort is taken. I have answered the demand with a cannon shot, & our flag still waves proudly from the walls. I shall never surrender or retreat. Then, I call on you in the name of Liberty, of patriotism & everything dear to the American character, to come to our aid, with all dispatch. The enemy is receiving reinforcements daily & will no doubt increase to three or four thousand in four or five days. If this call is neglected, I am determined to sustain myself as long as possible & die like a soldier who never forgets what is due to his own honor & that of his country. VICTORY OR DEATH.

No wonder then that Texans have a fierce sense of patriotism. Or that the shops around downtown sell t-shirts with the outline of the state, a Colt 45 and the words "Texas - We don't dial 911". Everything starts somewhere, and so much that makes the people of this state so great can be traced back to the courage and fortitude of those that fell on this very spot.
Posted by Joe at 11:52