Polo - hardest game in the world

A couple of years back, in the middle of my efforts to extract myself from my bookmaking business, I made a list of things I was going to do with the time I was buying. I've been working my way through it slowly enough. Some things on it will never happen, like running a marathon. Riding a horse was languishing near the never gonna happen pile too, until Sunday.

My friends Will and Katie have been in town for the last week, and they wanted a polo lesson. I've never ridden a horse before in my life. But worse than this, I am an incurable chicken. I'm afraid of getting on a horse. Why wouldn't I be? I spent eight years watching them race around fields, coldly calculating what they were likely to do, and more often than not watching them do the exact opposite. If you're gambling, you can mitigate these irregularities by choosing when to bet, and how much. If you're sitting on the bastard's back when he changes his mind....well. No thanks. And with a polo mallet in one hand? Don't make me laugh. 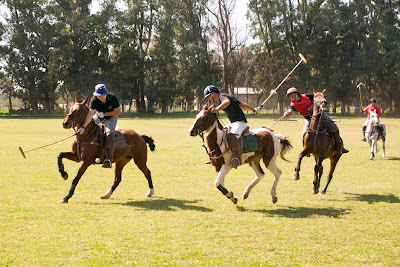 The pros make it look easy. Which it is. Not.
Early signs are encouraging. Fernando, our instructor, is 34 and only learnt to ride at 30. We watch some pros practice for a while, then saddle up. Not helped by the 24 hour old hangover that is still lingering around, I haul my sorry ass onto the back of Gran Oso, my mount for the afternoon. Gran Oso, as in Big Bear. After alarmingly brief instruction on how to control a horse, we are walking the length of the field. Old Gran Oso is pretty languid. Big Bear - like Gentle Ben, I guess? The others walk on ahead, Grand Oso and I take things steady. I decide he needs to get on with it, but the whip, my heels, and my Spanish fail to elicit a response. 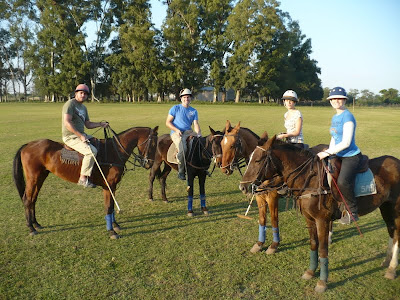 Team Polo Sport
At the end of the field, we stop for further tuition. We are all calm and still. Katie has handled a horse before, no dramas there. Sabrina too, though she looks a little higher up and her creature keeps eating grass in defiance. I'm not sure about the semantics, but presumably the difference between a pony and a horse is principally one concerning height. Will is a big lad, his mount (pony?) less so. In fact I think he may be scratching the turf with his heels. 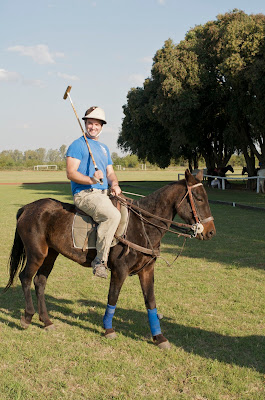 Will atop his remarkable shrunken horse
After more walking, Gran Oso and I begin to form a bit of a bond. He's still ignoring the whip though, so old Fernando gives him a few cracks to bring him into a trot. Now I know why it's called a trot. I shit myself with fear. We must be doing all of five miles an hour, but I am convinced he is either going to bolt, rear or maybe I will just crush my balls on the saddle. I yank the reigns and the big bugger slows down in his own time. 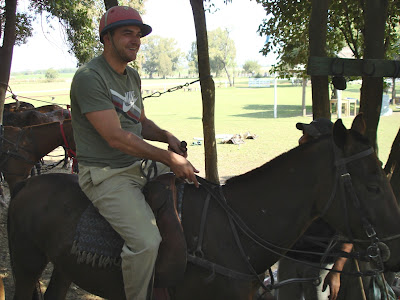 Man and beast in perfect harmony
After a brief interval to assess the damage and begin understanding why John Wayne walked the way he did, I remount, polo mallet in hand. Since I was using my right hand to cling on for dear life before, things are now a lot more interesting. Firstly, Gran Oso stops listening to me. The little shit. We are standing, perfectly still, listening to Fernando explaining how to hit the ball (unlikely) when he decides to start reversing. I push his neck. He backs up a little more. Oso, tranquilo.

Fernando is slightly irritated by my interruption. Disculpa. The fucker's off again. He won't stay still. ¡Oso! ¡Para! Left. Right. Doesn't matter. He's just not interested. I study him for a moment. I think he has some kind of skin complaint you know. There are bits of it flaking off his neck, the poor guy. It is round about this time that Sabrina informs me that his name may actually be Granoso and not Gran Oso. Granoso means spotty. But not in a nice sense - as in acne ridden. Great. Not so much Gentle Ben as the spotty little brat who used to feed him. 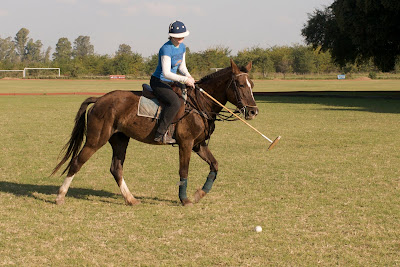 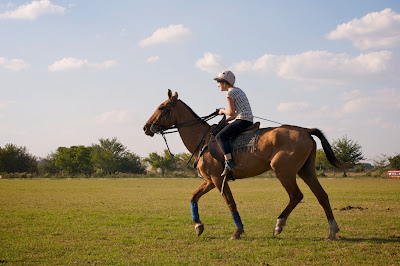 Sabri looking every inch the professional
Granoso perseveres with the theme of completely ignoring my commands. At one point, he decides we need to pop back to the farm for something, and I reluctantly follow. Fernando implores me to assert my authority but I am completely powerless. The rest of the afternoon passes in a haze of disobedience, punctuated only by my frustrated pleas. ¿Qué pasa? ¡Oso! ¿Qué es tu problema? Every ¡Vamos! and kick of the heel earns the old cold shoulder, and eventually I give up. It later transpires that I have been calling him cabello (the name of my old street - meaning hair) instead of caballo (horse) for most of the afternoon. I can only assume that this is motivating his defiance. 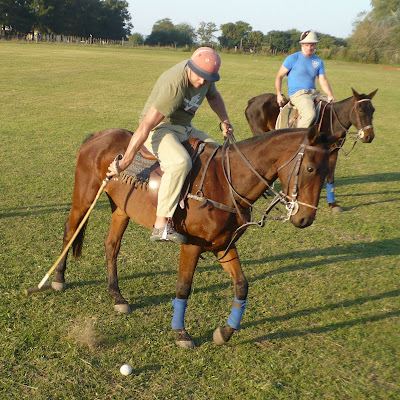 Granoso and I bossing the game from the middle
The 'match' that crowns the afternoon is a laughable affair. Katie has the riding skills but hasn't grasped the rules, so keeps crossing the line of the ball. Will rides rather like you might imagine a gorilla would ride a cat, but his ball skills are good, thanks mainly to the fact that he is only about eighteen inches off the ground. Sabrina can ride, but can't reach the ground, unless her horse has planted himself to it in order to eat more grass, which happens fairly regularly. Old crater face and I are playing a sort of holding role - I hold his reins; he holds me in contempt. We flirt our way around a wide circumference of the action with little purpose, occasionally catching sight of the ball. 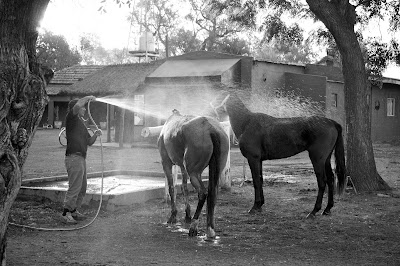 Eventually, as the shadows lengthen and the buttock muscles contract, we sidle our way back to the ranch. The horses get hosed down and we sip a cerzeva whilst comparing insect bites, muscle cramps and exaggerating our achievements. I quietly reflect upon another tick beside the list. Next time I think I'll just have horse riding lessons. I'm sure the mallet was the root of the problem - interfering with the primeval signals Gran Oso and I were sending one another. I mean, why confuse the issue? And polo? It doesn't get any more bourgeoise than that does it? Hardly my style at all. Nope. Not my bag. Tried it - yeah, it was fun, with a decent horse, I could have been useful. How long's a marathon these days? Still just the twenty six is it? Oh, go on then, might as well give it a....
Posted by Joe at 19:03