I like taking pictures, and am lucky enough to have a pretty decent camera. But it's not exactly practical at times, and completely impractical at others. Like in South American cities such as La Paz, Lima and Quito. It's going to attract the wrong sort of attention and get nicked. I need to get myself a compact as well, but they cost twice as much as in the UK.

This is why I need to cross the border into Paraguay, and visit Ciudad del Este. Ironically it is just the kind of place I need the new camera for; a bustling border town overrun by street traders, electronics shops and smugglers. It is the second largest tax free commercial centre in the world after Hong Kong, and the smuggling trade is said to equal about five times Paraguay's GDP. 90% of all goods sold here are counterfeit.

Whenever I tell someone I want to go to Ciudad del Este, their first response is always the same; Why? Up here, when you tell someone, they know. Queres comprar algo? (You want to buy something?). Well actually it's more than that. I want to see the place too. We hire a driver. He's pretty clear about it. He'll take us over, to an above board electronics centre, then we leave. Can't we eat there? I ask. Por que?

The border is the Puente de la Amistad (Friendship Bridge). It's hilarious; hundreds of motorbike taxis ferry punters over from Brasil. Behind chicken wire fences on either side, others make the journey on foot. Everyone's carrying something. It's dusty, traffic fumes clog the air and the buzz of people and movement is overwhelming. I look down over the giant Río Paraná I was strolling alongside in Rosario a couple of weeks ago. It feels a million miles from Argentina - the developing world. More what I expected South American cities to be like. And Thursday is the quietest day of the week. Every other day the buses back up for miles into Brasil.

I get the camera I want with little drama. I pay $480, about the same as in England. I've probably been ripped off but I'm happy. He makes out a receipt for $200 in case I get stopped at the border. Out in the humid street I take my first snap with it, looking back towards the bridge. I snap a few more, trying to get a sense of the energy and mayhem, but Lucas, the driver is waving at me. He really doesn't want to hang around. 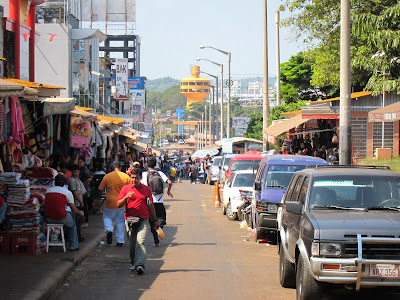 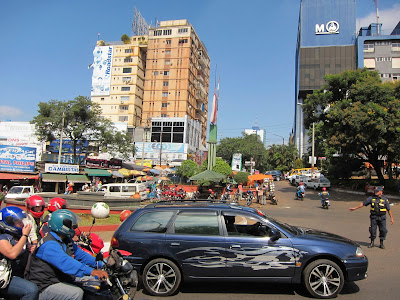 We cross back into Brazil, and no one so much as looks at us. Obviously an Argentinean and three gringos in a car have popped over for a bit of sightseeing. There isn't even a border control - no one looks at your passport in or out. It's a crazy place. I really wanted to have a proper look around since I can't see myself being back here any time soon. But like most people who make the same journey, I guess I got what I came for.
Posted by Joe at 19:00