I know there's all that crap about water spinning the other way down the plughole in the southern hemisphere, but I didn't realise a similar phenomenon affected their chickens. It does. All last night, gangs of nocturnal cockerels cock-a-doodle-do'ed their way through some sort of battle re-enactment, right outside my window. As the first tiny rays of the sun crept over the distant horizon, they packed up their things and fell into silence. After four hours of lying under the pillow with bits of toilet paper stuffed in my ears, finally I get a chance to sleep.

It was round about this time that the huge canine population of Puerto Iguazú woke up, and took over where their feathered comrades left off. Another couple of hours slip from my grasp. I can put up with this infuriating lack of sleep only on account of the fact that today I am going to visit one of the natural wonders of the world: Las Cataratas de Iguazú.

I didn't know much about Iguazú Falls until today. Er, a bunch of waterfalls right? Seen a few in my time. Seen one you've seen them all right? Like statues, walls, pyramids, hanging gardens and all the other so called 'wonders of the world'. You have to part with 85 hard earned pesos just to get in the park, and another 135 are coaxed out of you to take a couple of boat trips. We trudge off, tickets in hand, smeared in Off. 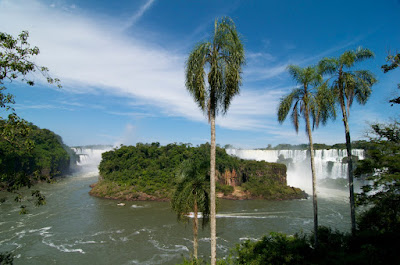 You hear Iguazú Falls long before you see them. The first view is a wide one - the main group of falls to the right and the massive Garganta del Diablo (Devil's Throat) on the left. It's a spectacular sight. Someone needs to do something about those trees though. 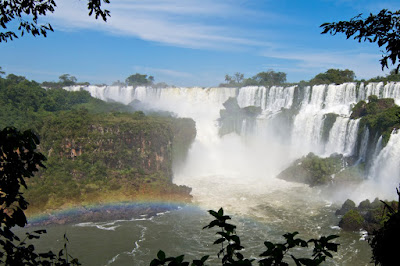 We're on our way down towards the boat to take us right up to the edge (the bottom edge, not the top Mum). The different perspective it offers is tremendous - looking up into the falls as the huge droplets rain down. This turns out to be an excuse to drench tourists, since the bastards then drive us right underneath. You can't look up, it's like being taken out with a fire hose. Saturated from the experience, we are able to take on a few more wet bits without worrying too much. 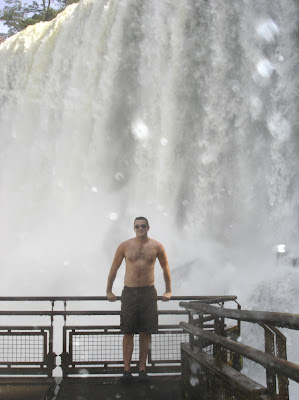 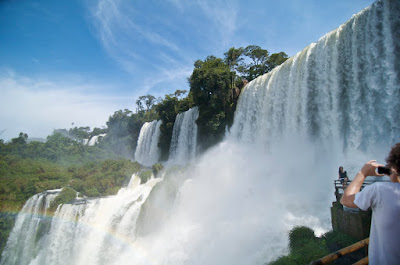 By the time we've taken the train to Devil's Throat, we've pretty much dried out. We're up top now, and following the walkway out to hover right over the top. All around is tranquil water, barey a ripple on its surface. How I pity the poor sucker who first paddled down here in his canoe, gently dozing off in the tropical sun. 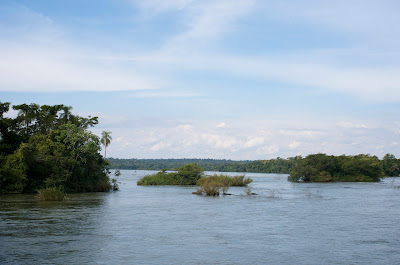 The contrast between this and what awaits couldn't be any greater. Inches away from the dead calm, comes the edge. The water drops down into an abyss. The wind gusts and the spray is belched back up, soaking everyone. It is so dense, you can't even sense the bottom, let alone see it. 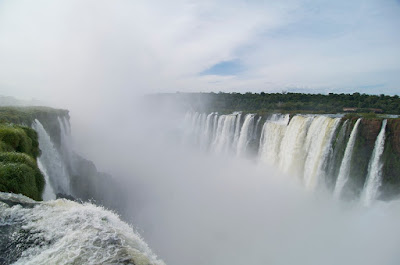 Standing over this, you cannot help but feel completely powerless. Awesome is a much overused word, not least by me, but this it is the only one to really describe this sight. It is the greatest display of the raw power of nature I have ever laid my eyes upon. Leaning on the rail looking over the edge, the roar, the spray and the sheer inevitability of the fall are compelling. It would be one hell of a way to go. In fact, I can't help but think it looks a little like a giant plughole.

Coming back tomorrow to have a look from the Brazilian side, so long as I get some sleep.
Posted by Joe at 19:57