The biggest food tradition in Argentina is the asado. The barbie. The barbecue. The grill. Call it what you like. Meat grilled over hot coals. Restaurants that cook in this style are called parrillas, and they are everywhere. But there is a real difference what they turn out and what people cook in their own homes and gardens.

In pursuit of more intel, I signed up for an asado course in a suburb called Adrogue. The train out there was interesting enough, and I eventually found the place, tucked away in a tree lined street. I couldn't miss it really, there were three gringos waiting outside afraid to go in in case the dog bit them. That should have been the least of their worries - the dog doesn't charge 110 USD for an afternoon's cooking. 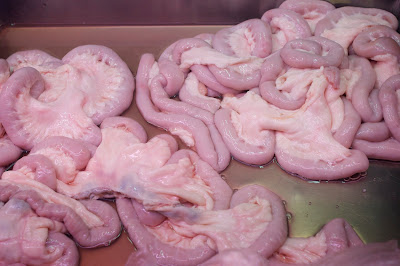 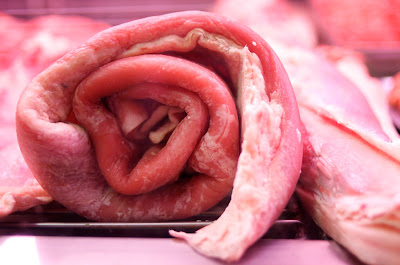 Matambre de vaca - beef flank
First up you need some fire. Argentine asados use the wood of the quebracho tree from the Northwest. It is incredibly dense and sinks in water. You can use other stuff but this is the best. We get it burning early and go inside to make empanadas. 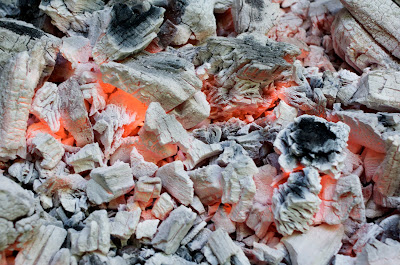 The offal takes a long time to cook so goes on first. Intestines wouldn't be my first choice, but if they crisp up enough and with a bit of lemon juice, I like them. They're nowhere near as strong a taste as kidney. The sweetbreads are the culinary find of the trip so far for me. I love them. Again, I prefer them thinner and crispy on the outside. Today we are cooking the thymus gland, though the thyroid and pancreas come under the sweetbread banner too. They are soaked in water first. 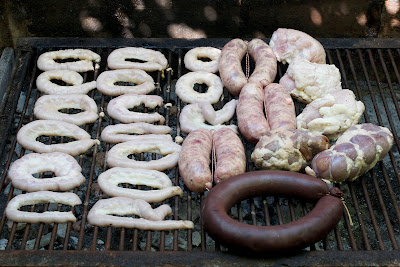 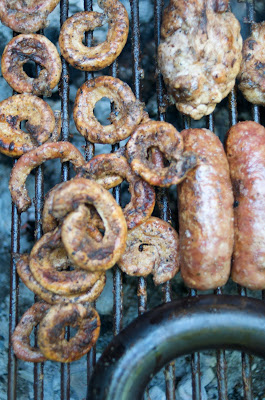 They look a bit more appetising after a little fire

Next up go the sausages, followed by the meat. The beef is only ever seasoned with salt, no marinades are used. We knock up a chimichurri and a salsa creolla to go with the finished products instead. I've seen the matambrito de cerdo cooked with half a lemon on top and that is far superior to without. The meats are served in sequence as and when they are ready by the asador. In this case, Bruno. 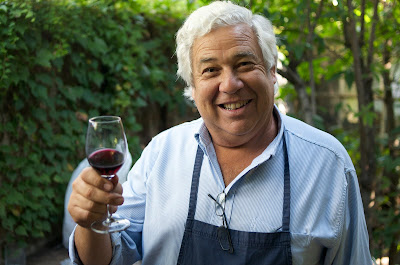 I've got all the books (in Spanish) and when I finally arrive back in England, assuming I can find somewhere to live, I'm building myself a proper Argentinian parrilla in the back yard, complete with mud oven for making the coals. When it's finished, maybe summer 2011 or 2012, you can all come round and try for yourselves.
Posted by Joe at 07:55