India stirs up all kinds of emotions, amongst other things, and I’ve ridden the full gamut of them in the last 24 hours.

Hampi was magical, but getting sick taints a place, and I needed to leave. My insides still unstable, I double dropped some Loperamide and shuffled towards the taxi.

I say taxi, though it was no such thing. I sat briefly on the back seat, or what was left of it, then opted for the front, before we bounced and bucked our way along snaking dirt roads, the driver’s soundtrack of throat clearing, spitting and nose blowing almost drowning out the noise of my weeping. As he repeatedly wiped his orifices with grubby hands, I could almost see the germs fluorescing, like in those bleach adverts. Kills 99.9% of all known bacteria.

The drive itself was bewitching, through endless villages buzzing with evening activity. Cows, kids, dogs, men, women, cars, bikes, trucks, all vying for our attention, and every vehicle blinding every other one with lights blazing on dazzling full beams. This is rural India, and it is poor, but the richness of the place and its people wafts in through the open window with the dust and the smell of the night.

On the platform at Hospet Junction, waiting for the train to Bangalore, children played and urinated, men spat and dogs sauntered back and forth proprietarily. This is their domain, and we visit only briefly. I spent those moments in silent despair. Perhaps sensing my vulnerability, a dog curled up next to my bags, and I thought of the theme tune from the Littlest Hobo. 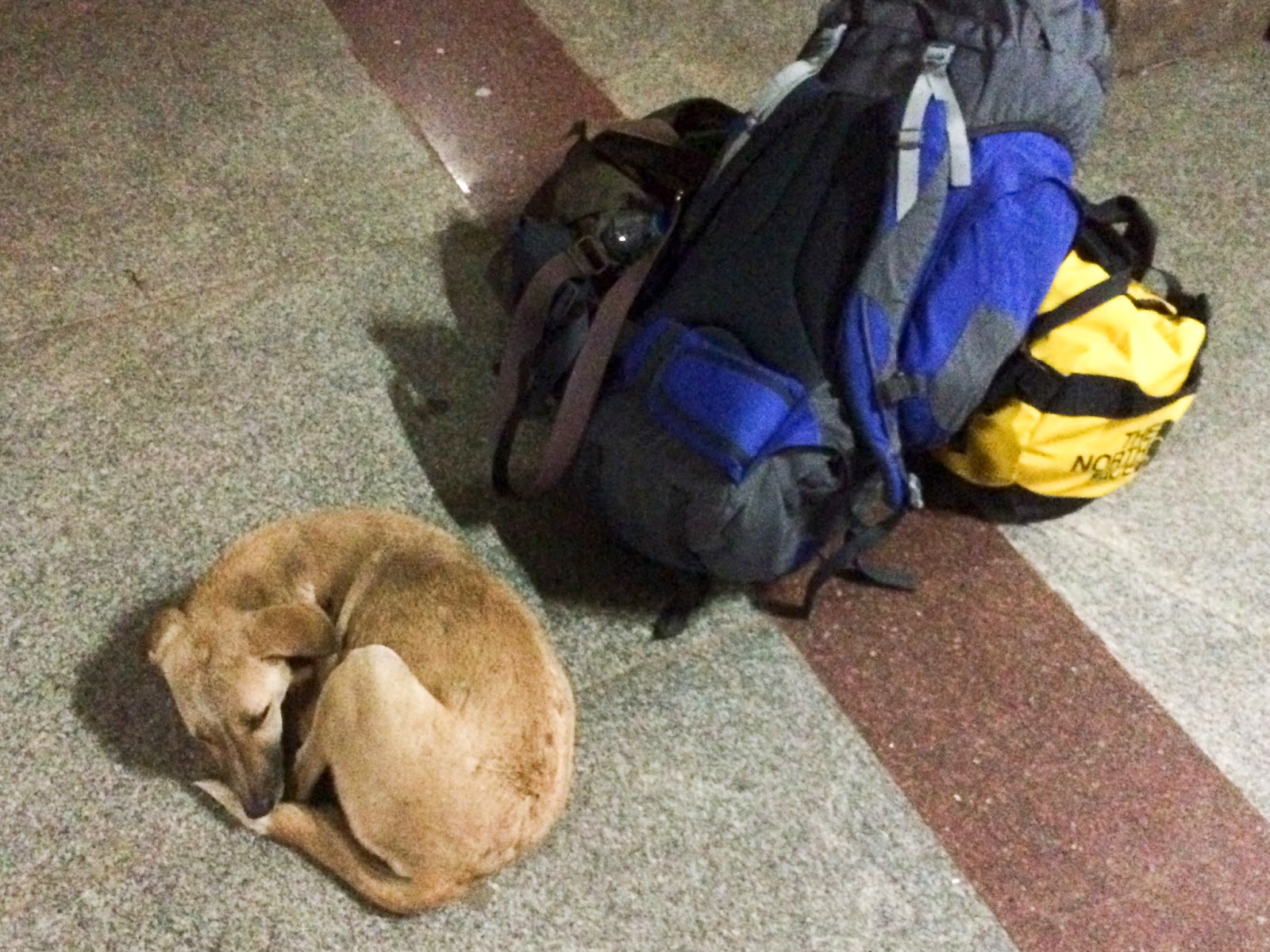 The train rolled towards us in slow motion. Every inch it crept along took minutes; minutes I could no longer spare. I had prayed for a cabin to myself, but shared one with three other men. This is India - you don't get what you had hoped for, but something infinitely better instead.

My conversation with Athar Ali, Rail Commissioner for the State of Karnataka, felt lifted from the musty pages of some fiction or other. A large, proud, man in white Muslim dress, it was quite some time before he spoke. In slow, precise English, accent as heavy as his build, he told me of his travels around India, recommending places to visit, of his trips to the Middle East, to Jerusalem and Bethlehem, and asked many questions of London and England, most of which related to the infrastructure. Having enquired of my education, we discussed the influence of British rule on modern India and he lamented its passing.

When it came to bedtime, I deferred to his rank in the civil service, not to mention his substantial frame, and took the more awkward top bunk. He repaid this kindness by snoring all night long, whilst I woke every forty minutes or so, just grateful for the merciful calm that still prevailed in my digestive system.

Until 5:30am. When the shit really hit the tracks.

The details don’t warrant sharing, but I sensed a transformation from casual diarrhea into something more sinister. The last hundred yards as we pulled into Bangalore City Station took an eternity. I was weak, tired, and ready to find a quiet corner somewhere to just curl up in and shit myself to death. This being India, I doubt that anyone would have noticed.

Instead, I found a hotel and after a painfully long registration process was in a small, clean room. Alone at last, with only a strange holographic picture of rabbits on the wall for company. I could relax.

Whatever had started up on the train continued, badly, and I alternated between lying meekly on the bed in the foetal position and cradling head in hands on the toilet, grateful that I had brought my own bog paper, since there was none, nor hose (far more useful) neither. Good day’s.

I must have slept, and woke realising I needed medical attention. Outside the door, was Bangalore. What did it have in store for me? The first thing to hit was the heat. Then the noise. Then the pollution. Jab-cross-hook. I probably should have been overwhelmed but I just felt at its mercy, with no inclination to put up a fight. I'd given up.

Having crossed the road without looking, I rubbed my aching belly with a modest, “My stomach is very bad.” “Lose moisture?” replied the pharmacist, and I wondered if there could possibly be a more diplomatic way of describing my condition, or one unburdened by greater understatement. “See Doctor. Get prescription,” he added with a jig of the head in that wonderfully Indian way, and gave me directions: “Go left. Doctor Something I don’t understand.” “Doctor Who?” I unwittingly replied, before he repeated it, and I thought I heard the word “Ram.”

And I had, because on the next left down a narrow, dusty alleyway, I duly found Dr Rama Krishna, and within thirty seconds of crossing his threshold, he had examined me, written out a lengthy prescription and told me exactly what I needed to do. And they say the NHS is the best healthcare system in the world. As an afterthought, he asked me for 200 rupees (£2), and I wasn’t about to haggle. 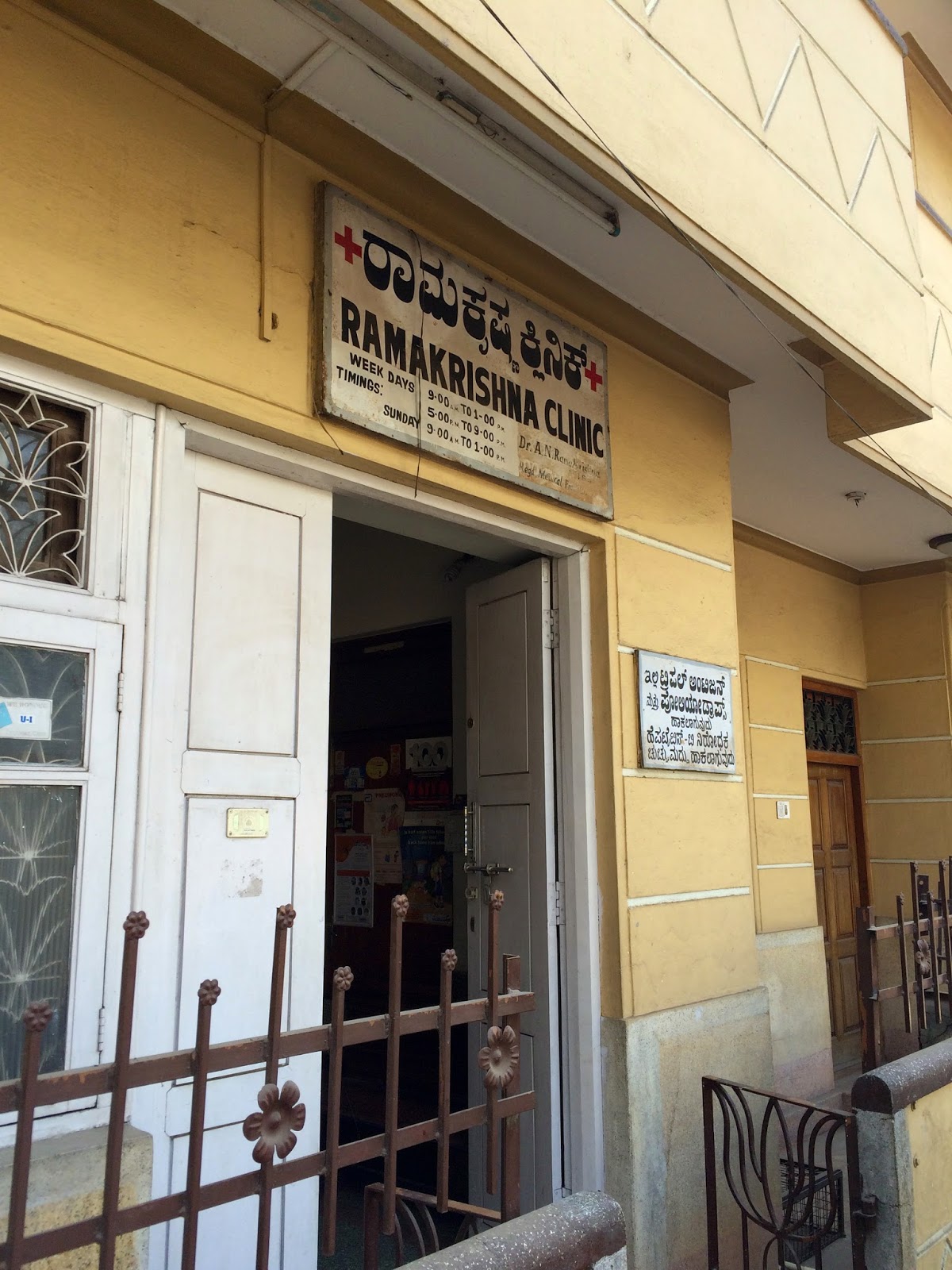 Emboldened by this experience, I went for a wander to sort my phone out. The process for getting a prepaid SIM card in India is similar to that for buying weapons grade plutonium in the west, and only a few shops issue them to foreigners. I ask for directions, which means being given wildly conflicting instructions of the “Go left,” “Right, right,” variety, always accompanied by copious head wobbling. It’s possible they’re not actually conflicting, and will all eventually lead to the same place, but I ask as many people as I can and assimilate their responses into a sort of statistically reliable chance of finding what the fuck it is I’m looking for.

Having found the place, so begins a series of pointless yet demanding administrative obstacles that would have had Franz Kafka ripping his eyeballs out in despair. I am sent around the houses getting photocopies of this and that, passport photographs, and then have to traipse miles back to my hotel for their card so I can pretend I’m living there, Partridge style. Having finally procured all this and returned to fill out the onerous form, they hand me a giant SIM card. Changing this to a nano SIM that will fit my phone means repeating the entire registration process. Tomorrow. And I’m flying to Kerala tonight.

Sensing my growing pain and despondency, the guys in the shop go to extraordinary lengths to expedite things, and manage to compress the two processes into one. That’s not it of course – there are telephone calls and service requests to be logged over the coming hours until I eventually get online the next morning. Athar Ali had told me that the British were great administrators and their legacy was missed after independence, but I argued that we over administrate. They’re definitely not wanting in that department.

A cab takes me from downtown Bangalore to the airport. It’s dusk again, and I feel like I’m travelling inside an exhaust pipe. The combustion engines keep on combusting, thousands of tiny controlled explosions all within yards of one another. Old buses belch out dense syrupy fumes, while tuk-tuks and scooters cough and splutter like taxi drivers. The airport feels like paradise, and I fill my lungs with its conditioned air.

I hold onto my insides for the short flight and before long I’m in another taxi, winding through the quaint streets of Trivandrum. It’s fresher and cleaner here and I instinctively like the place. Maybe I’m just glad to be so close to my destination, but more likely Kerala already feels like a welcome return to the bliss of Goa, feels like home. It’s not over yet of course – the taxi driver has no idea where he’s taking me, and cruises past hotels all over town in the hope that he stumbles upon mine, and it’s shortly before midnight when he finally does.

I've had enough of India. Enough of the endless film of increasingly visible filth that covers everything I encounter; of the piles of garbage that line its streets and the stench of it rotting; of the relentless spitting and throat clearing; of the vague, incomprehensible directions and baffling head shakes; of the endless administrative merry-go-round, forms to be filled in and stamps to be stamped; of the pervasive, lung wringing, toxic pollution and, most of all, enough of the parasite it has smuggled inside me that has liquefied my guts.

But at every low point in the last 24 hours, the warmth, kindness and humanity of Indian people has seen me through. And somehow, against all probability and despite the shitlist of things you have to put up with, everything seems to turn out just about all right in the end.

So tomorrow survives; a prospect that excites me still.