It's all about the Journey, not the Destination

A few of us were sat up the other night talking about India. Simon, who has been just about everywhere, proper travelling (the dreadlocks have gone thank God but he still occasionally wears the fisherman pants), was moaning about the logistics of buses and trains. A hitherto oddly silent South African guy (or was he silently odd?) suddenly and irrelevantly chipped in with the old "Yeah, but it's all about the journey, not the destination."

We let him leave before we started ridiculing him, and took turns recounting our worst experiences, of which Simon's "Shitting into a carrier bag lying on the floor of a bus from Delhi" story was the clear winner. Travelling itself, that journey, yes, that's what it's all about - people, places, the experience. Riding unreliable and unsanitary buses and trains at stupid times of the night, over extreme distances, is an infernal pain in the arse endured solely on account of the destination they deliver you to.

Last night I finally got round to leaving Patnem, and took the 9:30pm bus from Cancona to Hampi. You do what you can to make these things bearable, so I went for the most expensive option: an air conditioned flat bed.

No one seriously expects the bus to arrive on time, and it duly obliges, rocking up at the dusty old stand, after innumerable false dawns, shortly before 11. No big deal there, but what actually arrives looks like the sort of vehicle they used to export live calves in. Either that, or it has been modelled on the racks of cages you get in a pet shop, scaled up to house humans instead of gerbils.

I'm resigned to the discomfort of a sweaty, rocking bed for the sleepless night and make my way aboard, looking for berth 23. There are upper and lower bunks on either side of the gangway, with curtains pulled across by those already asleep. 23 is next to 24. Right next to it. As in, it's a double berth. A crucial piece of information they omitted to share when I booked, and that I would certainly have shelled out another 1,500 rupees to rectify. 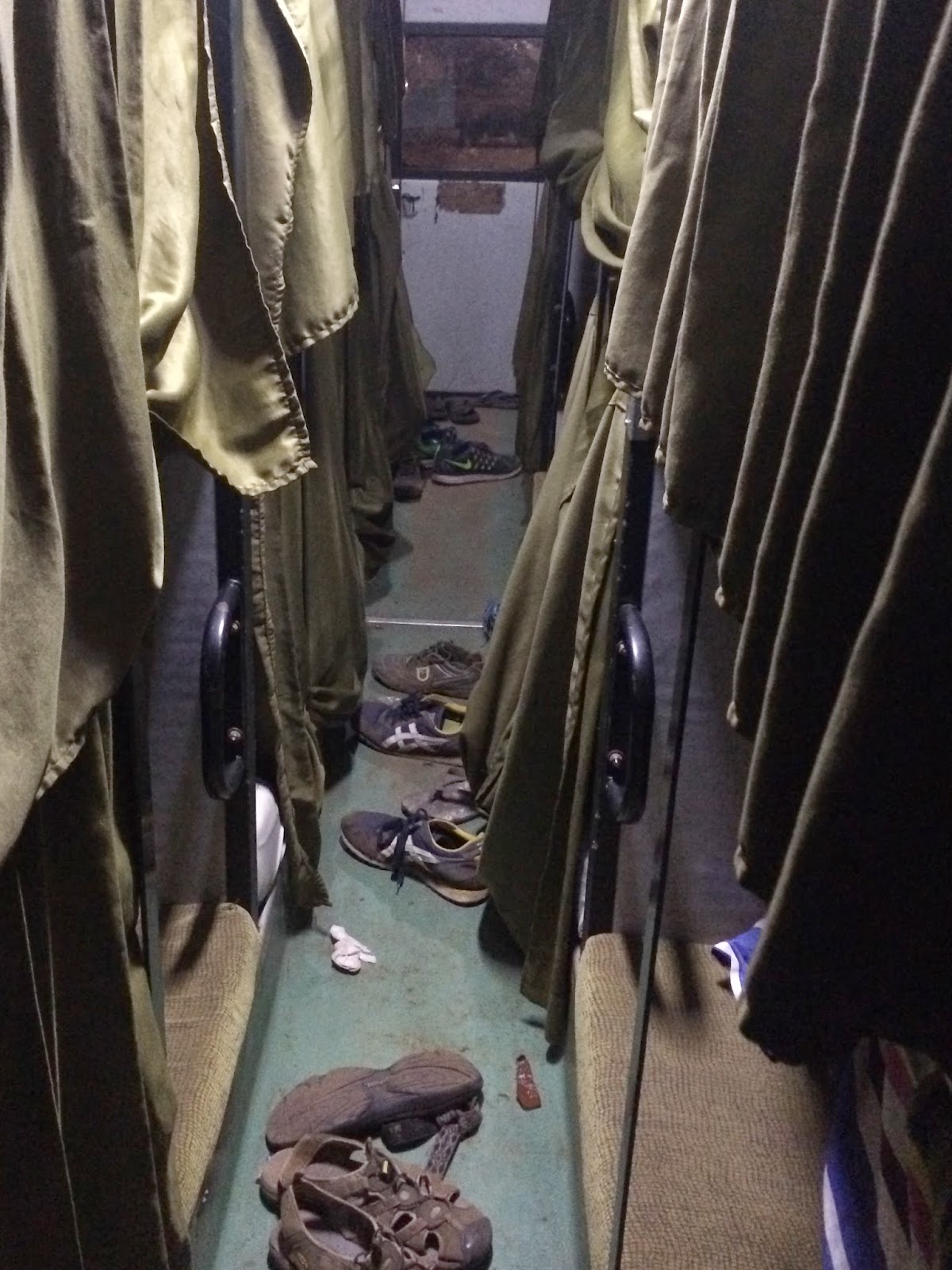 The non-English speaking Japanese guy asleep in 24 wishes I had too. He is wearing either pyjamas or a martial arts suit, I can't be sure, and hugging several large bin bags that he has to awkwardly rearrange in order to accommodate me in my two foot wide share of what he thought was his bed. I smile and try to be friendly but he appears quite unsettled by all of this so I offer to take the window side, where I promptly wedge my feet up against the wall, cross my arms across my chest like a corpse, and inexplicably fall asleep.

When I wake up ten minutes later, I'm thinking about how this situation would have made me feel at various times in my life. Uncomfortable, awkward, threatened, resentful and angry, I think. But right now, I couldn't care less. I'm just lying there, smiling to myself, surrendering my fate to the universe, or more specifically, to the Indian system for allocating bus seats, and revelling in the lightness and absence of stress that comes from the abdication of control. And so I start to wonder if I don't secretly, masochistically, enjoy all the inconveniences that attend getting from one place to another 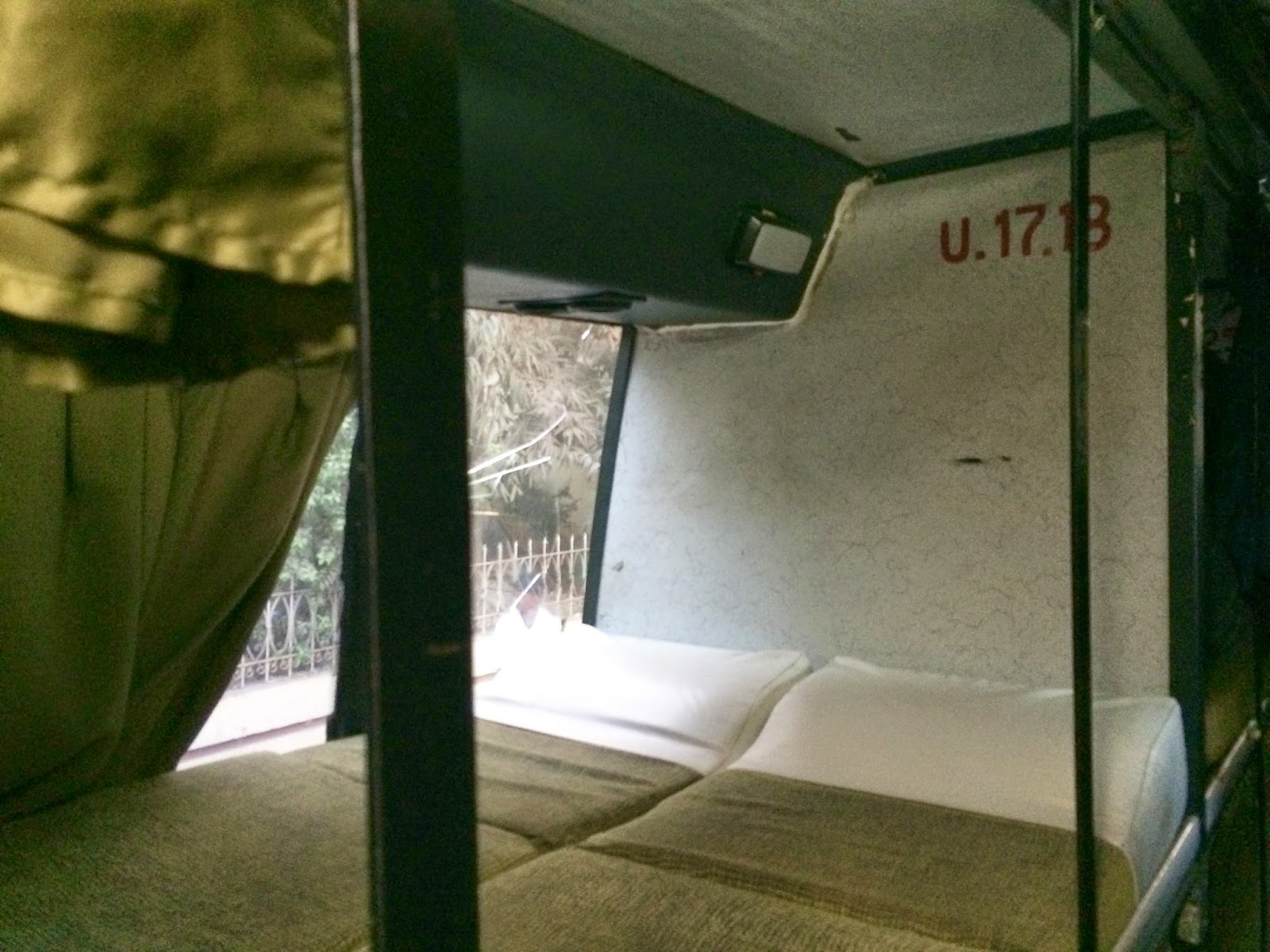 After a couple of hours we stop and I go for a piss (there's no toilet on the bus). Not keen to shit myself, I knock back a couple of Imodium too and climb back aboard. This is the last stop where new people might board and there's still a free bunk, into which I now debunk. When my Japanese friend realises I've moved, an expression of pure, unadulterated delight explodes across his little face.

The rest of the night is uneventful: intermittent sleep on a hard sofa that hasn't been upholstered (or cleaned) in the last hundred years while my head sweats on a "pillow" made of dentist's chair material. Halfway through the night I remember I bought a snickers and, in the ecstasy, devour it in one mouthful. It's daylight when we arrive, a few hours late, naturally, and the bus is greeted by a crowd of rickshaw drivers, baying for rupees. They mob us like rock stars as we alight, waving maps in our faces as if they want us to autograph them. 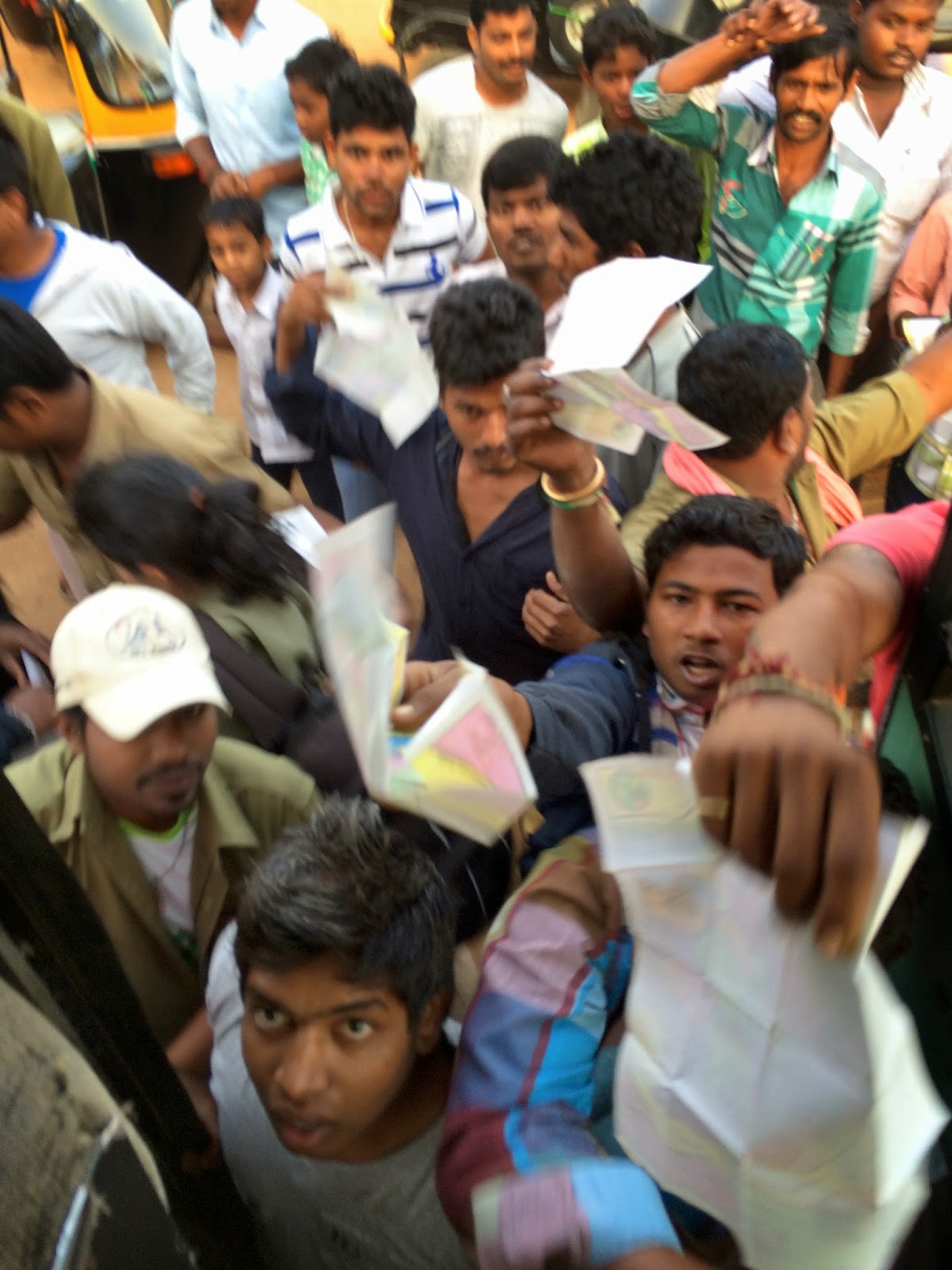 A friendly looking guy named Pampa takes me down to the river for the first boat of the day from Hampi Bazaar to Virupapur Gadde where I'm staying. Standing on the ghat waiting to climb aboard, I think back over the last twelve hours. A journey is just the price of getting to wherever you're going. Sometimes it rewards you beyond your wildest expectations and sometimes it (literally) rinses the life out of you. You can only hope that when you get there, it was worth it.

Later, out on the scooter, I passed the scene of an accident. A car had left the road and was crumpled against a tree. I don't know if anyone was hurt, or worse, but when I returned after my ride, the car had been covered with a sheet and they were preparing to tow it away. It occurred to me that the actual phrase is something like "Life is about the journey, not the destination," and at that moment it seemed the most obvious and pointless statement of all time.
Posted by Joe at 21:08