It’s easy to read so much about some places that you almost know them by the time you arrive, and the magic of their first impression is diluted or lost altogether.

I steered clear of reading too much about Hampi, or looking at pictures, knowing only what I had gleaned from the Lonely Planet: that the ruins and temples of an ancient city lay among a landscape littered with enormous boulders. I was more interested in the boulders than the temples; these giant stone balls that cover the landscape, but their size and number is overwhelming. And the reality is that they don’t litter the landscape - they are the landscape. 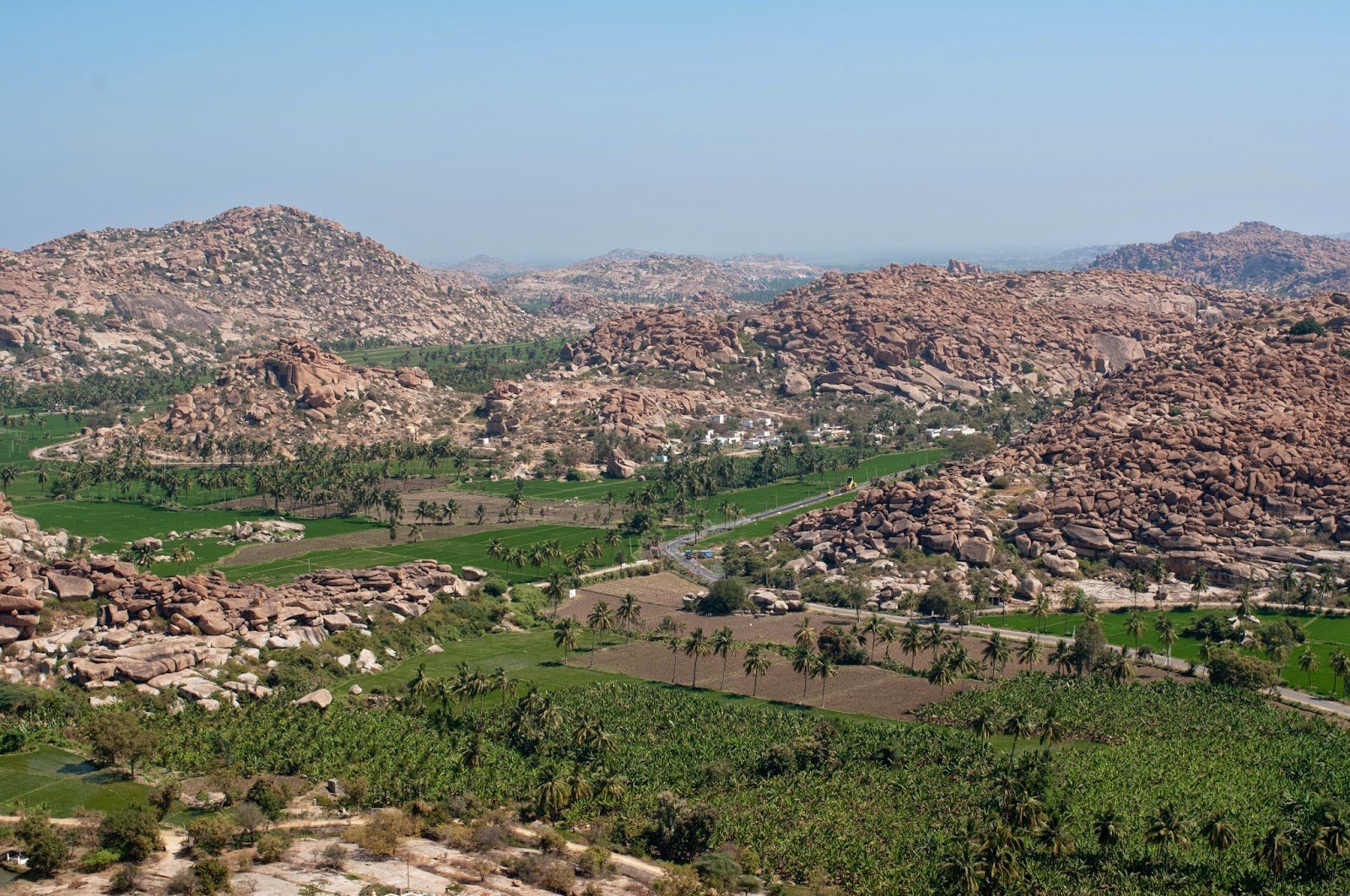 It might look as though these rocks are the result of some seismic catastrophe or volcanic eruption, but the granite terrain of Hampi is actually one of the most ancient and stable surfaces in the world. Three and a half billion years in the making, its unique boulder formations are the result of erosion. At first underground, by water, and then as the plateau uplifted over millions and millions of years, the rock was exposed and polished into its current shapes by the wind and Sun. It's tempting to call them other-worldly but that would be to completely misunderstand them, so inherently of this world are they.


The hills and ridges that line the horizon are an endless string of these stones. They lie clumped together, spread about as though dropped by birds, or balanced impossibly upon one another, as if by some wizard. It is easy to understand why primitive man took to using the notion of God to explain the world. Who else could have arranged them thus? 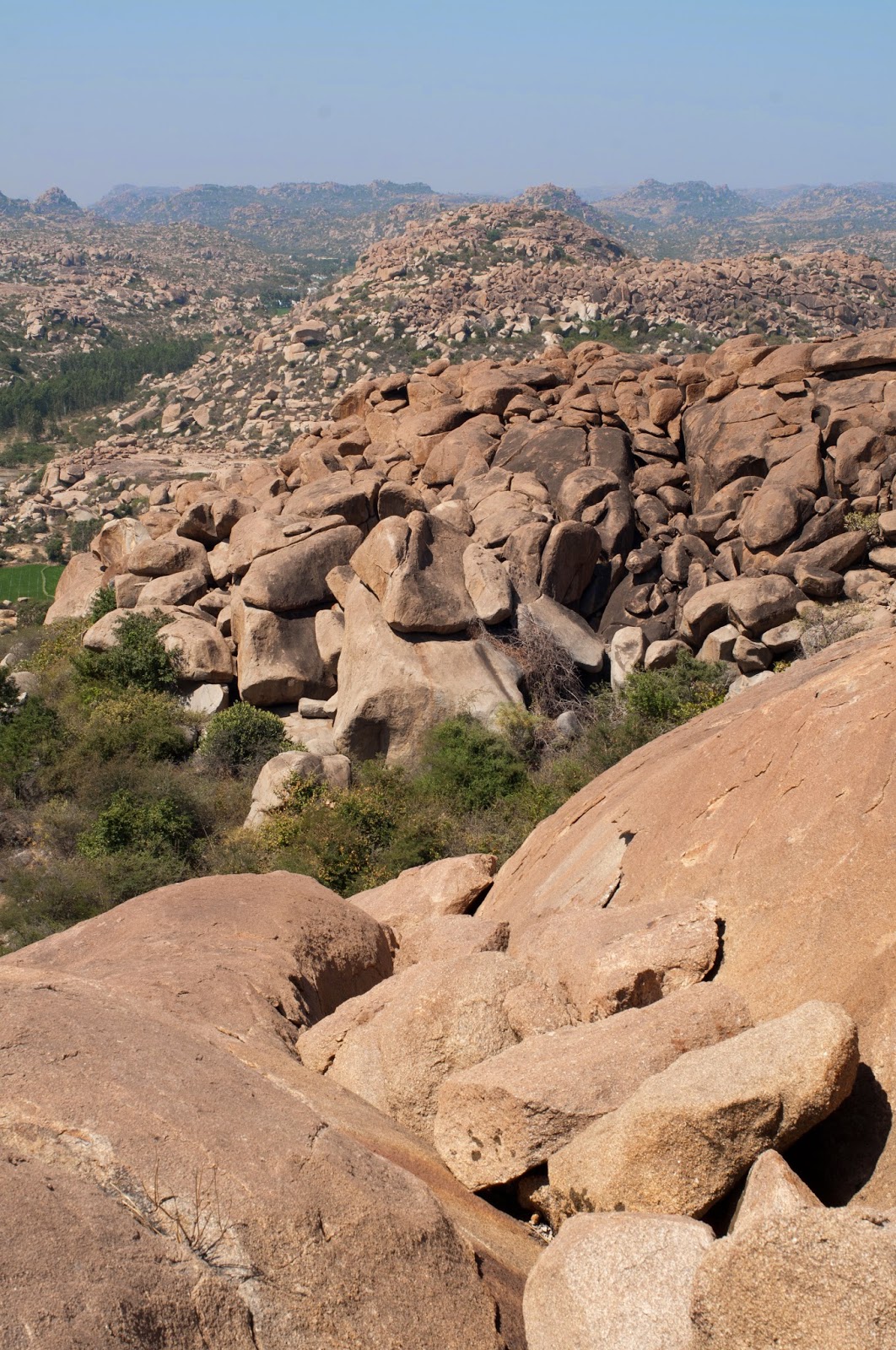 Where your eye isn’t drawn to these strange formations, their solid, smooth skin glistening pink and rusty in the baking sun, it is taken by the lush, stark greens of the palm trees, banana plantations and paddy fields that fill the gaps between them. It seems inconceivable that a landscape can look at once both so barren and so fertile. The boulders remind me of Southern Utah, where the red dusty terrain was so dry and inhospitable. 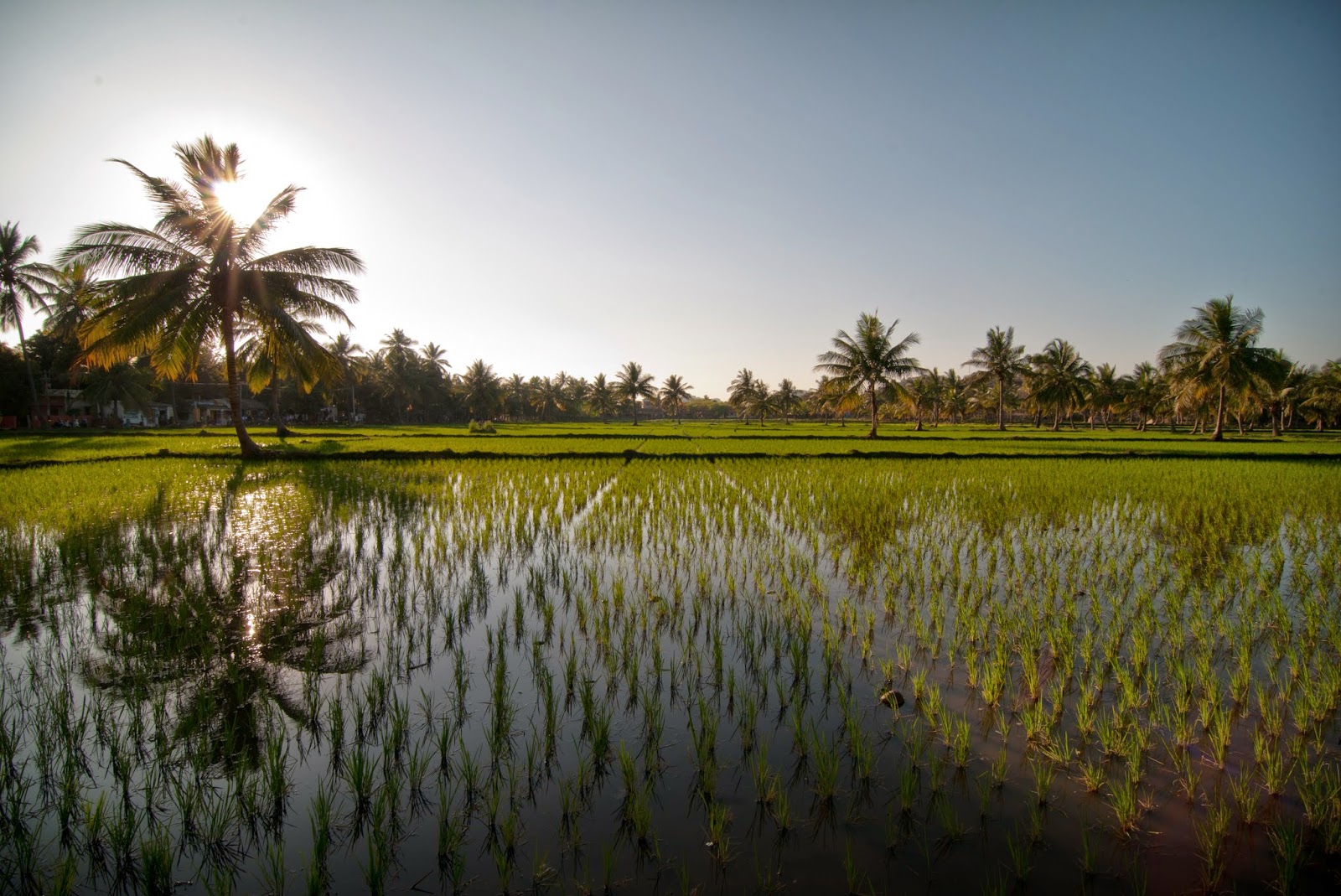 In the heart of this landscape are the little towns of Hampi Bazaar, and across the river, Virupapur Gaddi and Anegundi. Hampi is the modern name for Vijayanagara, a vast Hindu city that flourished from around the 14th century until 1565, when it succumbed to invasion by an alliance of Muslim sultanates and was razed to the ground. And that was the end of what was at the time probably the second largest city in the world – sacked, destroyed and emptied.

The little towns themselves are no longer empty. Hampi Bazaar is full of tuk-tuk drivers and guesthouse owners, though the tourists themselves are harder to spot. Over the river in VG, an international community of unwashed, dreadlocked travellers are in permanent residence. I feel pretty conspicuous in my GAP shorts and the plain t-shirt is doing nothing for my credibility. Nor is the fact that I don't take drugs, if the conversations I have overheard are anything to go by. And not just the conversations - the wild coughing fits of my three Israeli neighbours turned out to be the result of them smoking buckets at 8:30 in the morning before they checked out, and the guy sat opposite me as I type this may actually have passed out while smoking a joint (it's 10am), so long has it been since his eyes were open.

Though the towns are busy, the temples are not. Whereas in Angkor, Cambodia, the town has millions of tourists passing through each year and the best spots are crammed with punters, this place is practically deserted. It's a treat to wander among them like this, with only a handful of backpackers and locals for company. The last stop on my tour is the incredible Vittala Temple. If the others seemed empty, this one is definitely full - they're filming a movie and it is packed with cast, crew, extras and curious, friendly locals. 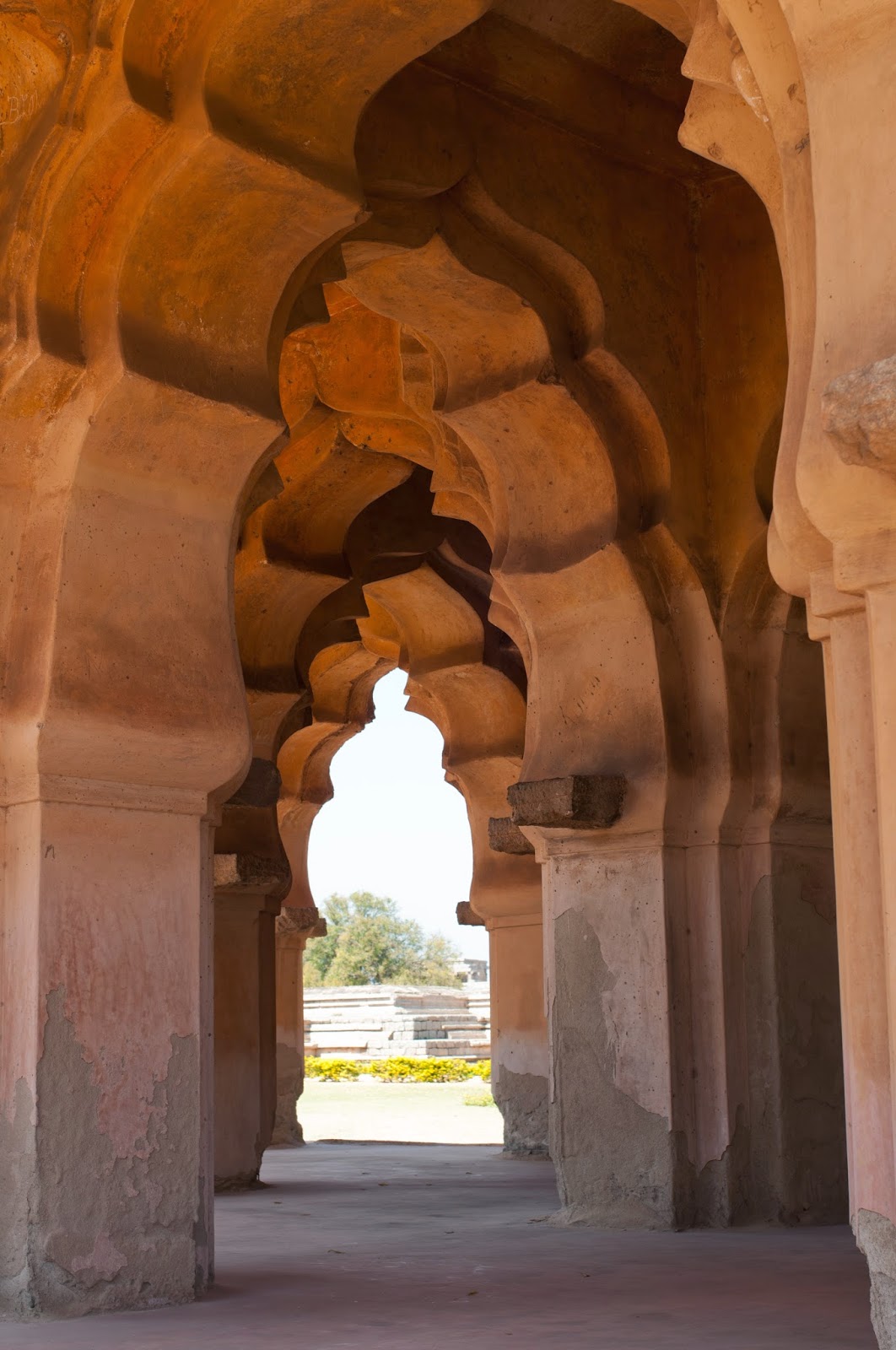 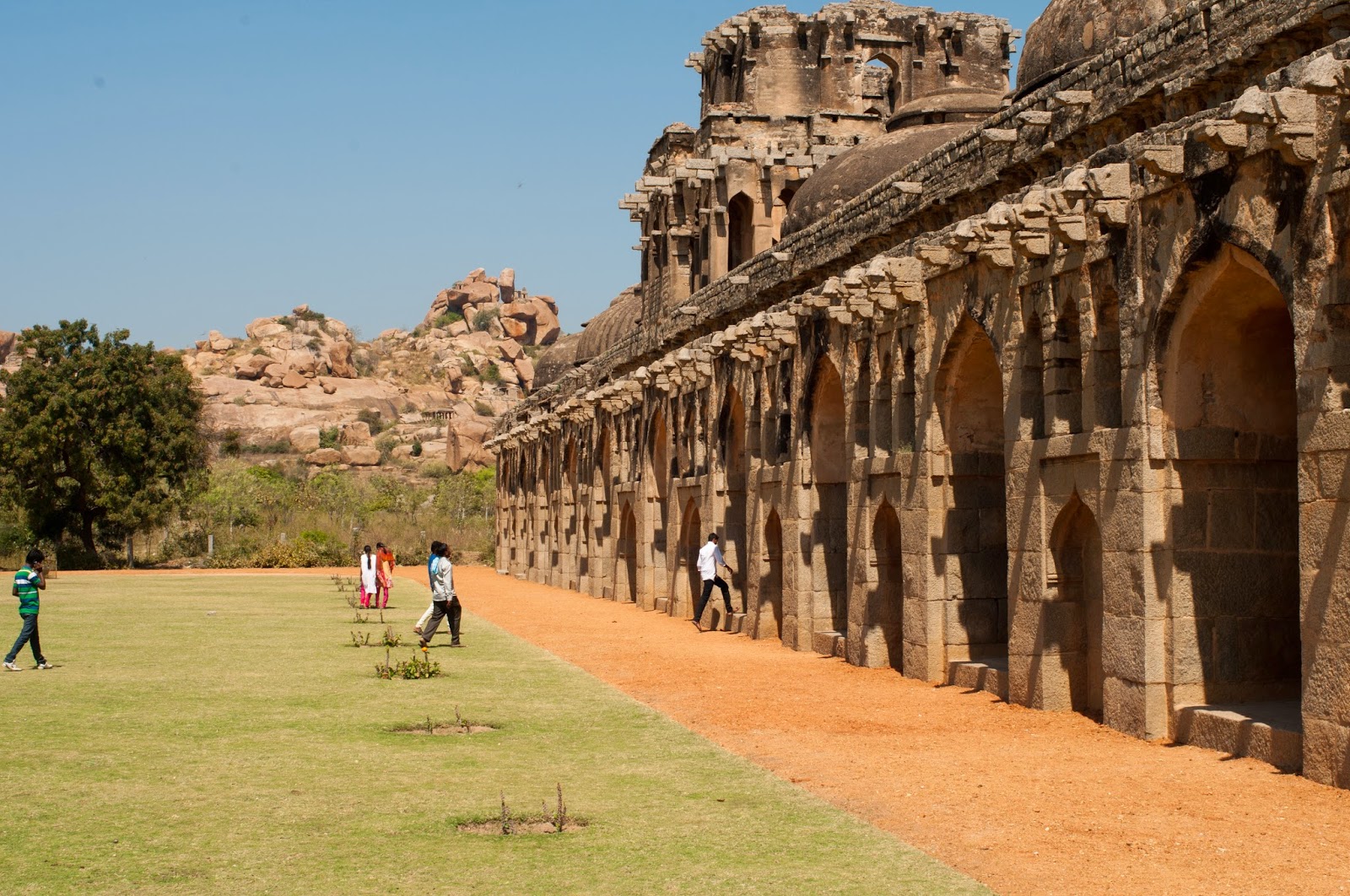 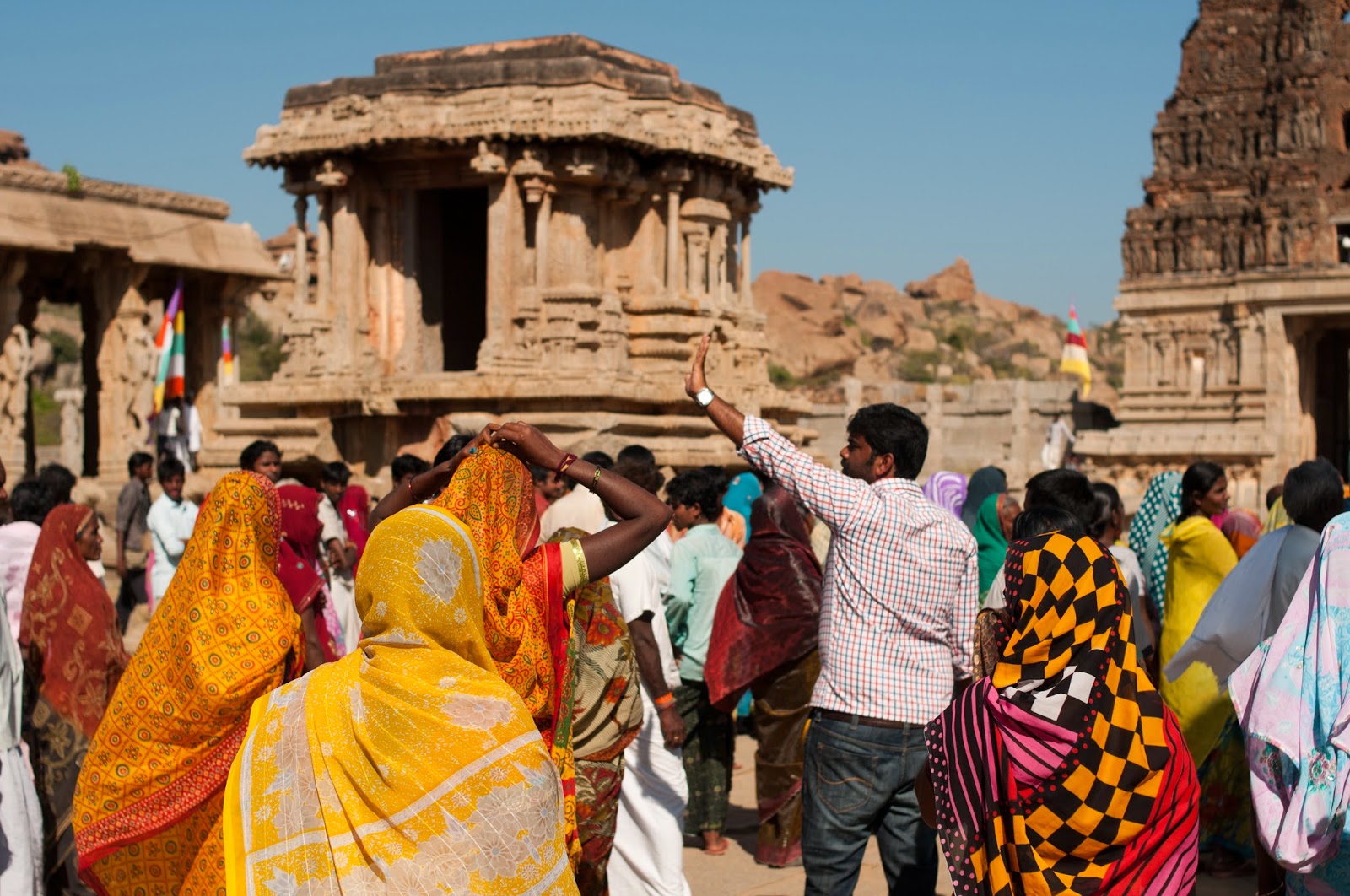 There is a wonderful synergy between the ruined buildings and their surroundings. In Japan, this is called shakkei, meaning borrowed landscape, where temples were designed to harness the contours of nature and incorporate them into their beauty, but it feels like the reverse has happened here. Man did his best but the stones are so huge, so overpowering, that they dwarf even his greatest efforts to outdo them. 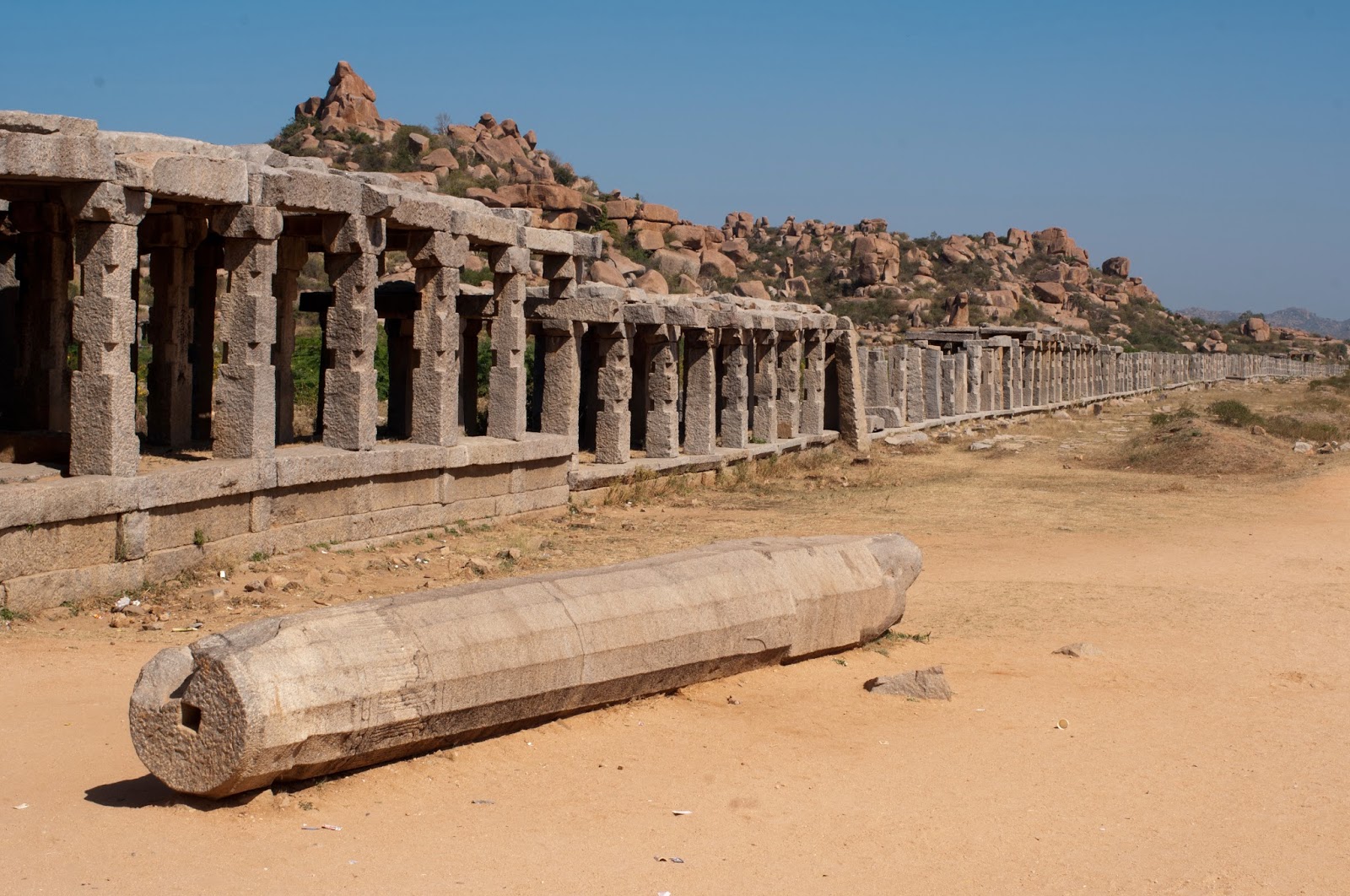 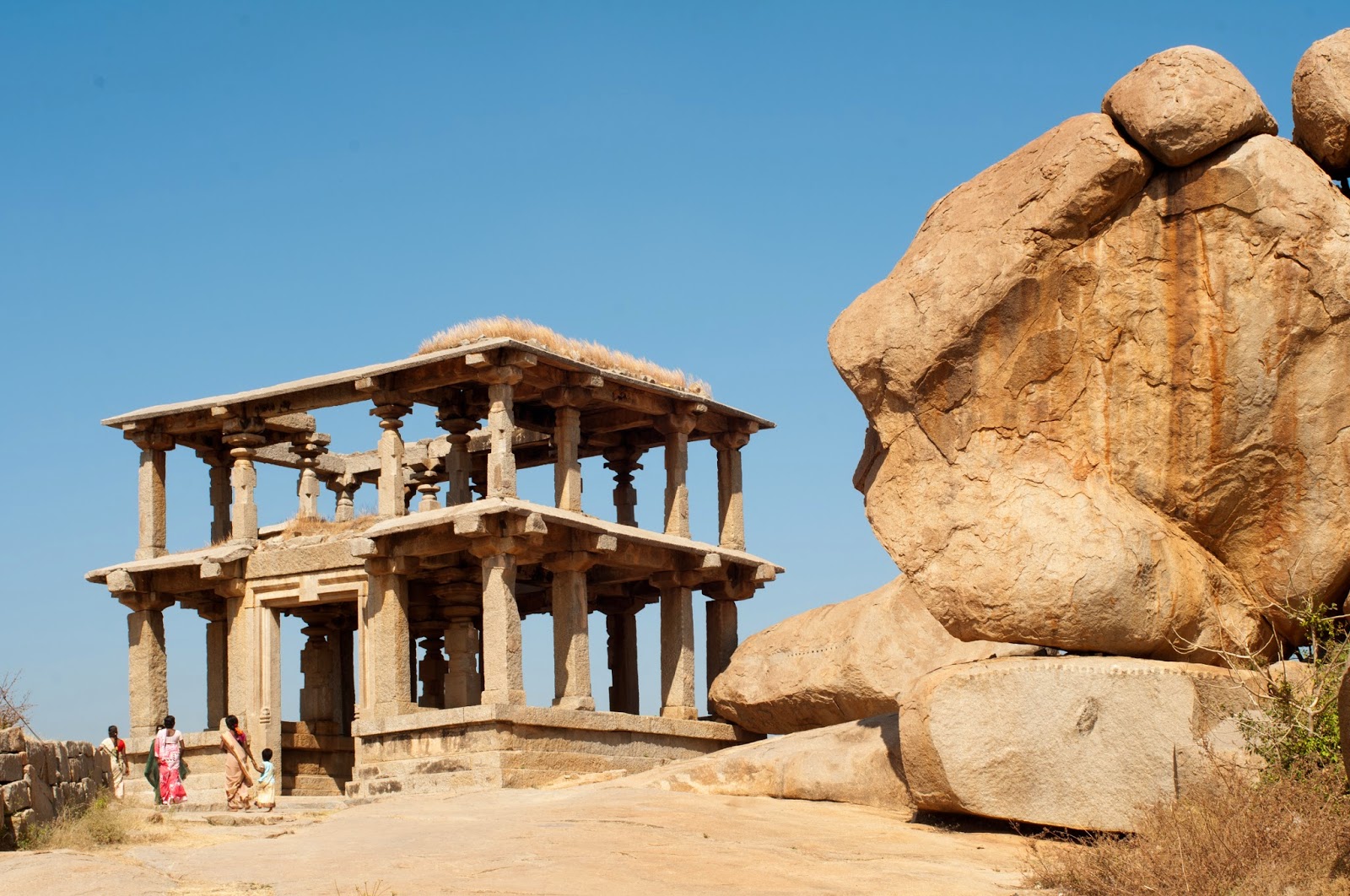 I was reminded of how I felt in Nikko in Japan – a lush forest hiding countless temples, the glorious trees cut down to make way for stone monuments to the Gods. And so it is here in Hampi, where the unique landscape was mined to build a city, and the most intricate and remarkable temples were carved from raw and unsubtle rock. It’s strange to be here, marvelling at the things man has laboured over in the glory of god, when all around us true testimony to the wonders of the Earth, its creation and existence, lie abundant and undisturbed. 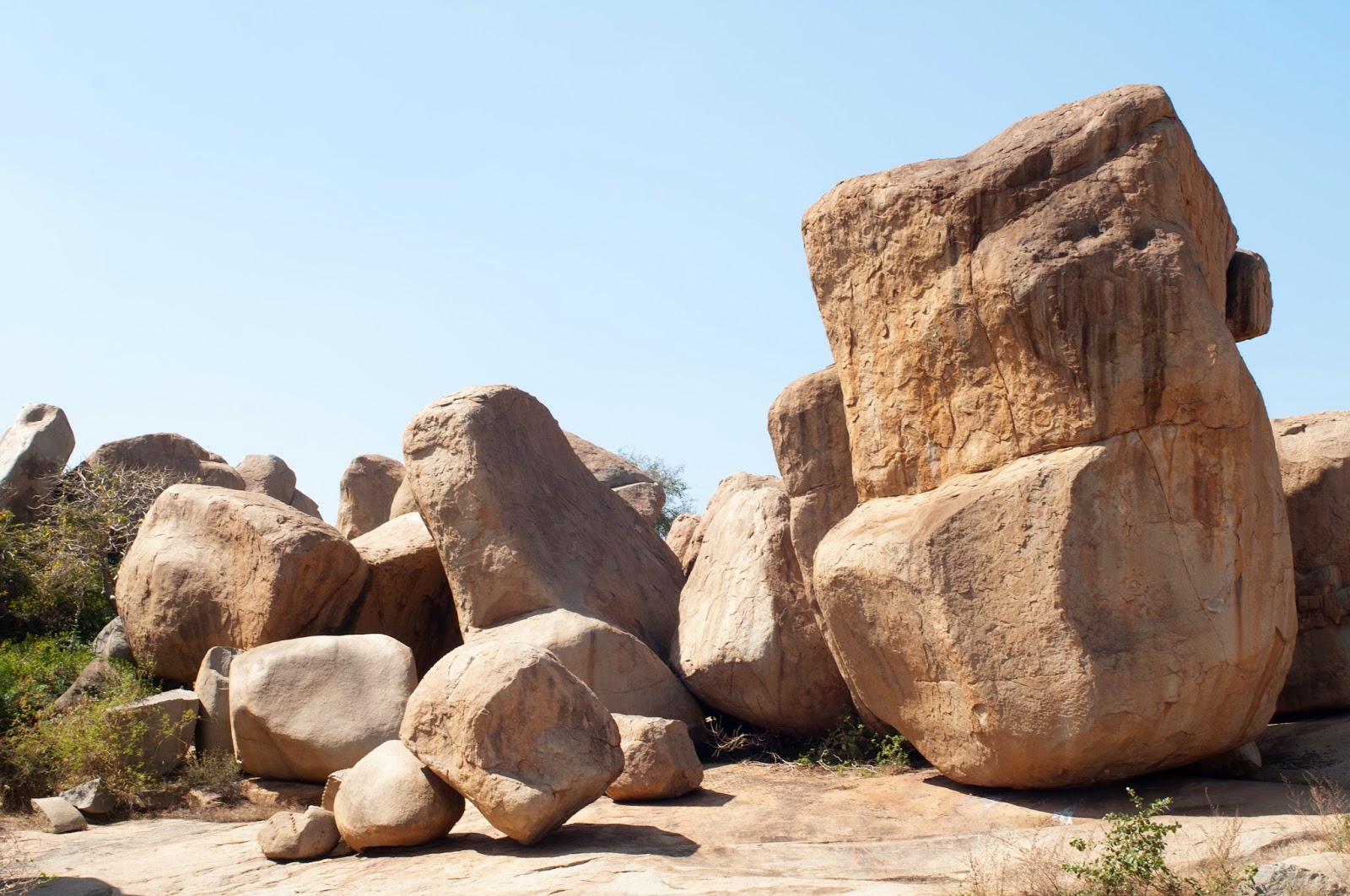 The other evening I climbed the six hundred steps up to Monkey temple on a hill that overlooks the valley. As always, I found myself walking towards the sunset, and again I thought of elsewhere in the world, of White Sands in New Mexico, where I watched an incredible sunset, tiny grains of gypsum sand running through my fingers. My hands reached down to touch the rock beneath me and I was struck most of all by its warmth, and how solid and intransient it seemed compared to those fragments of dust. So I laid my body out across the granite, in savasana, to feel as much of it in contact with me as possible. When I eventually opened my eyes and looked up, the old Sun was almost out of sight, growing larger, it seemed, as we inched away from it, and I thought that it takes being in a landscape like this, what we might call “other-worldly”, to realise just how completely fucking amazing the one we live on really is. 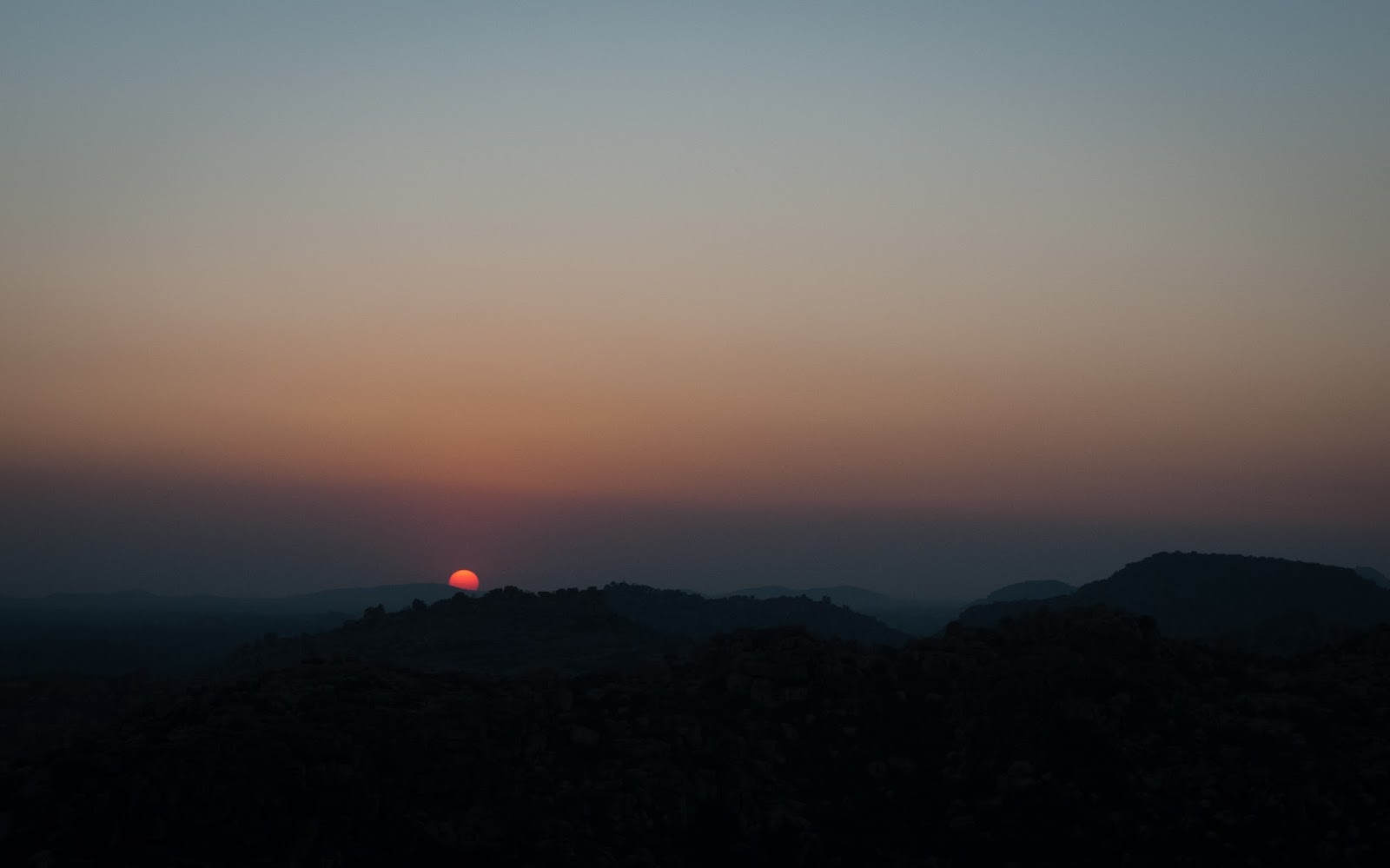