I've just watched The Social Network, and what a nice bloke that Mark Zuckerberg is. Really lovely guy.

Loathe him or merely hate him, without facebook I wouldn't have been heading from Auckland to Waihi Beach, where my old friend Hugh lives. We hadn't seen each other for twelve years, and would surely never have done so again were it not for that geeky little twat and his creation.

We headed north up the Coromandel Peninsula for a couple of days, driving the scenic roads in the inadequate Ford Focus I'd rented. We hiked to remote beaches, and finally wound up in Whitianga (Wh is pronounced as F in New Zealand, which will take some getting used to but could be a useful way of writing swear words).

With twelve years to catch up on, we got amongst the beers. It's reassuring to realise that for all the things that happen to us throughout our twenties, all the changes that take place, nothing really changes. Except perhaps that the hangovers get a bit more brutal as the years run out. 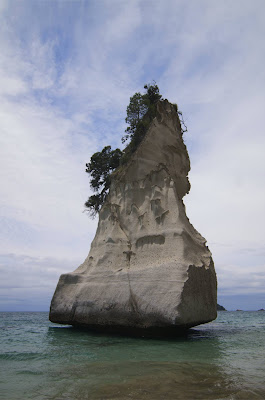 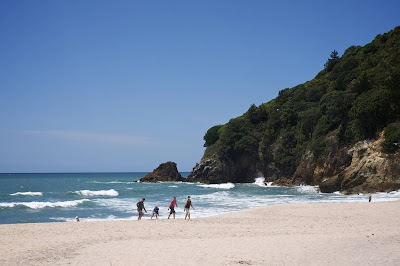 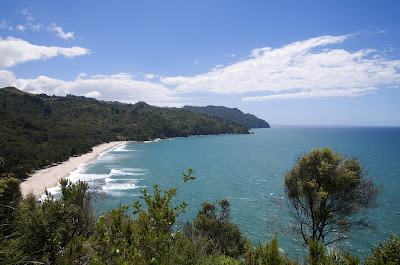 Orokawa Bay
I spent a few nights just chilling out back in Waihi Beach with Hugh, his lovely wife Indri and their friendly but psychotic dog Genghis. We swam, ate, watched DVDs (two series of The Inbetweeners exposing a gaping chasm between Indri's sense of humour and ours) and successfully chased Genghis around the neighbourhood before he managed to kill any other dogs or children after I unwittingly let him escape.

I could have spent the next couple of weeks doing the same, but this is meant to be a road trip. One last adventure, one more journey of discovery, as far away from home as it is possible to be. There'll be no slouching for the next couple of weeks, I thought, as I got behind the wheel of the Ford whucking Focus and took to the highway for one last time.
Posted by Joe at 13:57